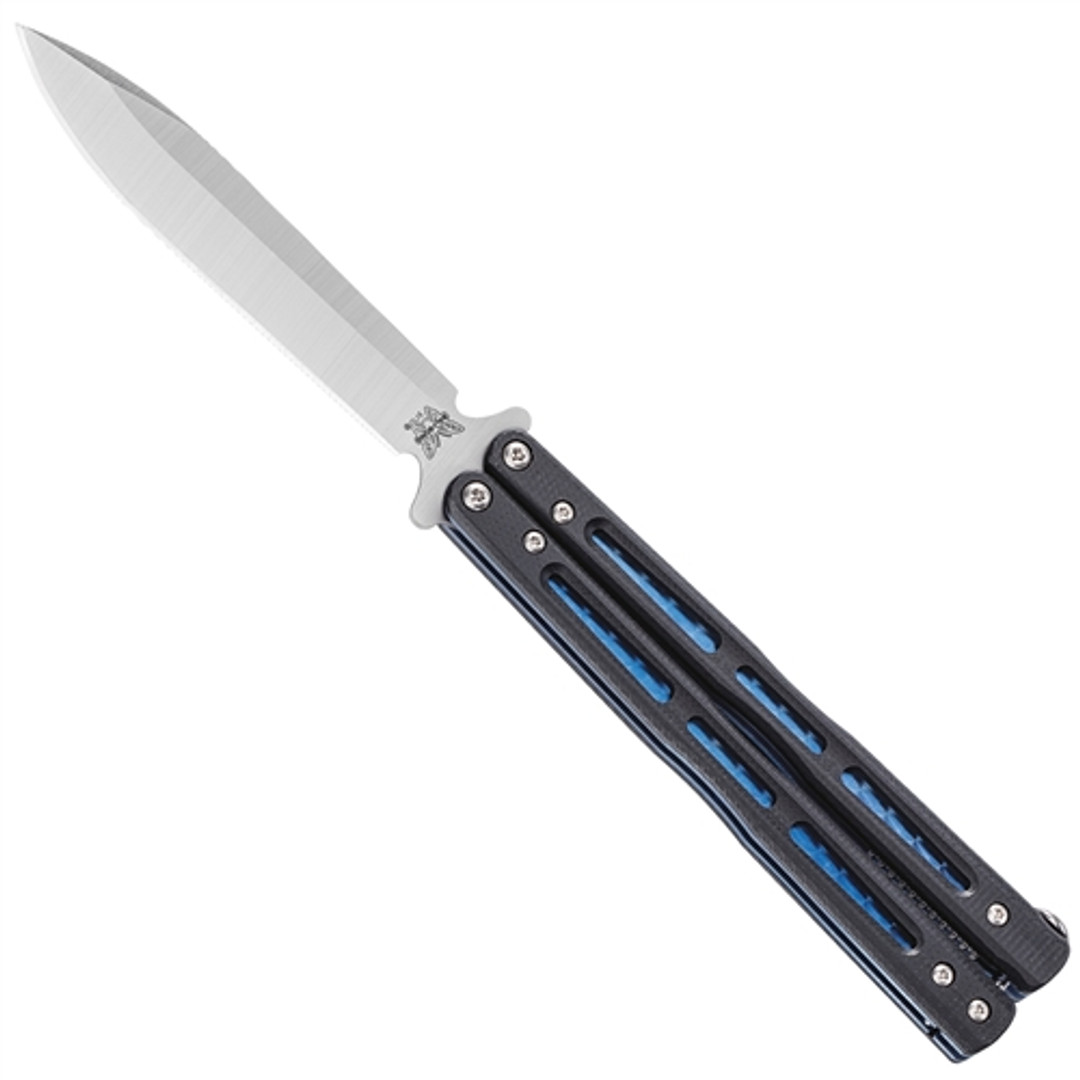 Benchmade first got their start in 1988 and began with just butterfly knives (hence the logo) before diving head first into automatic, spring assisted, folder, fixed blade and rescue tools arena. Offered in multiple sizes and handle configurations, this lightweight model features a patented liner-sprung spring latch locking mechanism as well as next generation kicker pin technology which provides incredibly smooth action. Take it from us--this could quite possibly be the only balisong you ever need thanks to Benchmade's incredible tolerances and a semi-custom look without the heavy price tag. This larger Blue Class model, the 51, features semi-skeletonized black G-10 handle scales coupled with blue anodized and jeweled titanium liners, a spear point style blade in a satin finish and the reversible titanium pocket clip is designed for tip up carry only but is eligible for a left or right hand carry option. Made in the USA.

History of the Balisong

The Benchmade history, and their Bali-Song knife began in 1979 when Les de Asis wanted a knife that had the best quality to replace the cheap balisongs or butterfly knives, he played with as a kid. Les used his high-school experience to develop and make his dream knife a reality. He created his first balisong in his own garage. From there he took the knife he had created, the model 68 Bali-Song, to a gun store where he was asked to make more of them. From this knife came the famous Benchmade Butterfly Logo that millions recognize everywhere.

A balisongs peculiarity is its two handles counter-rotating around the tang of the blade. When closed, the blade is concealed within grooves in the handles. The balisong knife is the traditional name. There are other names it has. Benchmade has it named Bali-Song (with a hyphen in-between). Another name for the knife is a butterfly knife. It is also referred to as a Batangas knife, after the Province of Batangas, the Philippines where it is traditionally made. The balisong was commonly used by the Filipino people for self-defense and as a utility knife. While the meaning of the term balisong is foggy, a popular belief is that it is derived from the Tagalog words bali and sungay which means broken and horn in English. They were originally made from carved carabao and stag horn. Balisong is also the name of a small area in the Batangas Province, which became famous for crafting these knives.

The Benchmade Morpho Bali-Song is an impressive knife. As always, below is a list of the different specifications for the Morpho.

A lot of these items will be covered, there is no need to worry about that. There is much to be discussed about this knife.

The Morpho Bali-Song 51 features as its blade a spear point blade. A spear point is comparable to a needle-point blade in that is good for piercing. However, the point on the spear point is more durable and it has a small "belly" that can be used for slicing. The belly is relatively small when compared to other knives, such as a drop point or a clip point. A spear point is symmetrically pointed with a tip that is in line with the center of the blade. These types of blades can be either single-edged or double-edged. On the Morpho, it is a single-edge blade. More popular for a spear point is usually a double-edged design. One common use for a spear point blade is in throwing knives. The lowered point on the spear point is easy to control and is useful for fine tip work. A spear point knife is a great choice for those looking for a good balance between piercing and slicing ability. In the end, it is a great mix design that is highly functional. Simply put, the distinct advantages of the Spear Point include its strong point, its sharp point, and its ability to be controlled easily. This blade makes the knife better for self-defense and for other tactical purposes.

Besides having a great blade style, the Morpho 51 blade steel is the durable D2 steel. D2 steel is a wear-resistant steel used for various cutting tools such a shears and planers. It was first developed around the time of World War II. It contains 1.5% carbon and 11.0  12.0% chromium; additionally it is composed of 0.45% manganese, 0.030% max phosphorus, 0.030% max sulfur, 1.0% vanadium, 0.7% molybdenum, and 0.30% silicon. It is a popular knife steel due to its edge retention. One setback the steel has is that when it becomes dull, it is harder to sharpen. Due to its high chromium content, it is often considered a semi-stainless steel. D2 is a high carbon tool steel. Compared to a steel like 1095 it is not nearly as tough but it is capable of holding an edge for a long time. D2 is also much more resistant to corrosion than 1095. Being a tool steel, this knife is able to accomplish heavy duty tasks.

The Morpho Bali-Song 51 is an impressive butterfly knife, no doubt. But what makes this knife look ever more impressive is the finish it has. Not so much the black finish of both the blade and the handle, but the accented blue that sticks out on the handle. Both the pocket clip and the handle liners are a titanium blue color. This color is accented very well with the black background that the handle offers. The black G10 handles have milled into them holes that allow the blue liners to show through. The blue liners have a reflective property to them. But more than that, they reflect in a repeated circular fashion. Overall the knife looks fantastic. Definitely helps persuade someone to purchase this knife.

Parts of the Knife

To better understand what a Balisong (or Butterfly knife) is and how to properly use it, you need to understand some of the basic parts. What makes a butterfly is its particular handle configuration that it is composed of two parts; one fixed handle in one hand and one that rotates on an axis. The axis of butterfly knives is usually made of a rivet or from hex screw.

The standard locking system on a balisong knife is the latch. This holds the knife in a stationary position, whether if the blade is open or closed. Magnets on occasion are used instead. The latch typically is found on the bite handle.

A pivot joint is a pin about which the tang, the blade, and the handles rotate about. On all balisong knives, there are two pivot joints. A regular folder knife has one pivot joint. The two pivot joints allow the knife to open in its unique flipping way.

The swedge is the unsharpened spine of the blade. Some balisongs are also sharpened on this side of the blade to make it into a double edged blade.

These are but a few of all the parts that go into a balisong, but these are the key parts of the knife. Knowing these will help with operating the knife.

Opening the Benchmade Morpho Bali-Song is quite simple, and fun! Below is a step-by-step guide to help lead those who do not know how to open the knife:

1.Start by holding the closed knife in your dominant hand.

2.Unlock the knife. On the Benchmade Morpho, this can be done by tightly squeezing the handle. This causes the spring that is holding the locking latch stationary to disengage.

3.Grab the safe handle on the knife (you dont want to cut yourself with the blade).

4.Flip open the handle over your hand exposing the blade.

5.Rotate loosely in front of your hand 180 degrees.

6.Flip the blade against back of hand

7.Flip back and grab rest of handle

This is just a simple list of steps on how to open the knife. There are several different ways to open up the knife. Once you play around with the knife for a while, it becomes easier to open. And given time, you could probably start performing tricks.

1.Again, start with holding the open knife in your dominant hand.

2.Unlock the knife if you locked it into the opening position. Unlike opening the knife, the lock has to be manually disengaged. A squeeze on the handle will not unlock it.

3.Flip over the handle that normally conceals the blade edge when closed.

4.Rotate the knife loosely in your hand, around the front side of your hand, 180 degrees

5.Flip the same handle against the back of your hand. Your hand will be in-between both of the handles at this point.

6.Flip it back over your hand and grab the rest of the handle.

It will take time getting used to, but operating the Morpho can be done. It is different than opening a traditional folder, or auto knife. However with some practice, these knives can open much more quickly than the fastest of autos.

Why would anyone want to get a knife like the Morpho Bali-Song? There are many different laws and regulations, and the populous reputation that connote a negative feeling to them. One reason is that they are so much fun to play around with. Secondly, they are a safe knife once opened. Unless a pin is sheared or some other freak accident, they will not close on your hand. Another reason to get one is the fact that they can be opened one handed faster than many spring assisted knives. They are also slim, lightweight, and easy to carry. It is very difficult to open one accidentally when locked, including in a pocket. They are often stronger and more secure because of their two pins. Another benefit to having a butterfly knife is for their use with those that wear gloves when working. Such as yard work or working in the shop. This is because they are large and easy to operate with gloved hands.

Some other benefits of the owning a balisong include:

With the balisong knife, especially the Benchmade Morpho 51, the benefits outweigh the costs. Balisong knives are another fantastic alternative for those who are in need of a folding combat knife. Benchmade was founded on butterfly knives that have quality and class to them. The Morpho 51 is no exception. Having this knife is a great addition to any knife collection.
×