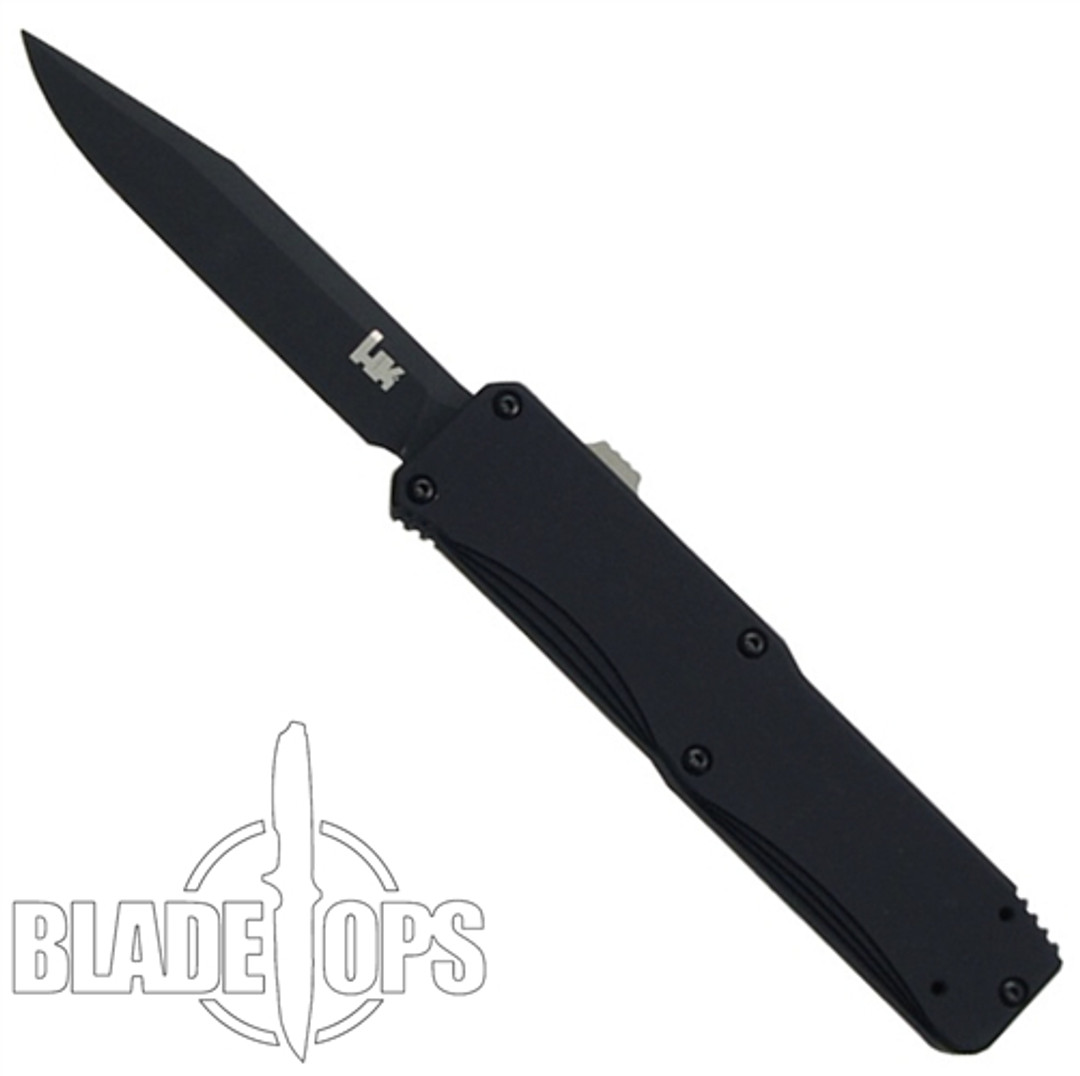 This knife is out of production. Go to the Benchmade OTF Knives page for similar knives.

The Benchmade H&K Tumult OTF knife has an under $200.00 price tag and is a definite hit for collectors and those who use them as EDC knives. The Tumult fetures a dual action OTF slide on the spine of the handle (ambidextrous)--this means it opens and closes with the same slide trigger. It also has a modified clip point blade made of D2 tool steel to give it durability and cutting power. The part serrated blade on this fantastic out the front knife comes out fast and locks up tight. The blade has a black tactical finish. This model, the 14800BK has a plain edge on the blade. The handle, made of 60601T aluminum is lightweight and easy to carry. The Tumult also features a black pocket clip (Tip Down) with the H&K logo on it. Knife

The Benchmade H&K Tumult out the front knife boasts a BK1 coated D2 tool steel clip point blade that opens and closes with the same trigger slide. This double action OTF auto knife is the perfect ambidextrous knife built by Benchmade in the US for their Heckler and Koch line of knives. With a price point under $200, this is a serious contender for best value in an out the front auto on the market. It combines the best of materials with quality manufacturing to put a tactical knife in your hands that will give you the edge you need.

The 3.50 clip point blade measures 5/8 across and .10 thick. The blade slides out with precision when you press the slide trigger up towards the front of the blade. Pull the trigger back, and the blade retracts equally smooth, ready to be stashed again in your pocket or gear bag. The D2 tool steel blade has a Rockwell Hardness of 60-62.

There are basically four standard items to be compared when comparing blade steels. They are, in no particular order, hardness, toughness, wear resistance and corrosion resistance. Often, improving one of these items means sacrificing a bit in one of the other areas.

The Rockwell scale, if you didnt already know, is a method of testing the hardness of an item by measuring the depth of penetration done by an indenter (standardized) under a large load versus the penetration made by a preload. The Rockwell scale measures different items and classifies them as a letter of the alphabet as well as a number. For instance, if you wanted to measure the hardness of a piece of tungsten, you would rate it on the A part of the scale by striking the tungsten with a 120° diamond cone with a load of 60kgf. Most knife blades are ranked on the scale in the C rangehence you see the HRC initials. The key to remember is that indentation hardness has been proven to correlate linearly with tensile strength. So the higher a knife blade rates on the HR scale, the higher tensile strength it will have. Factors that affect the HRC are the material used (kind of blade steel) as well as the well as the heat treatment that the blade is given. Because of the process Benchmade uses in producing the blade for the Tumult, the blade ranks as one of the harder blades you will currently find on the knife market. Which means that you have an extremely tough blade. Hardness, toughness, wear resistance as well as corrosion resistance are all refer to the properties of a blade.
Many knife people will discuss the HRC or the hardness of a knife blade. It is a relatively easy measurement to take. The higher the HRC, the harder the blade steel is. Toughness can be thought of simply as the opposite of brittleness. If a blade is heat treated incorrectlyit can easily become brittle. Toughness is affected by the original steel used, the heat treatment, the sharpening and grinding process as well as usage. Over time, a blade can become more brittle if not taken care of properly. Often a higher hardness of steel will also mean a more brittle blade steel. There are fewer methods to test the toughness of a blade. Most often it is tested through bend fracture tests or through impact tests.

Wear resistance is the ability of a blade steel to resist being abraded or worn during use. A higher wear resistance comes from the hardness level, the chemistry of the blade, as well as the finish on the blade. An even wear is more desirable because it means you wont get significant variations in different area of the blade. Most wear tests fall into one of two categories. Abrasive and adhesive. Abrasive wear is exactly what it sounds likethe blade is tested by rubbing across sand or some other material to test the rate of wear as well as the eveness of wear. Adhesive wear is testing the blade by rubbing it against a relatively smooth material, such as another piece of steel. This is not tested for as frequently as abrasive wear.

Corrosion Resistance is the measurement of a knife steels ability to stay intact and whole when faced with wet conditions as well as salty environments.

D2 ranks very well on all four of these measurements. The high carbon tool steel has 1.5% carbon, 1% molybdenum, 12% chrome and 1% vanadium. This, combined with the finishing creates a very hard steel that is also tough. Extraordinarily so. It also has really good wear resistance and good corrosion resistance. The combination of ranking well on all four of these is one of the reasons so many knife aficionados love D2 blades so much.

The 4.60 black anodized machined 6061 T-6 aluminum handle features CNC machining on both faces. The relatively smooth handle is accented by steps that create texture fro grip. The front edge of the handle has three heavy jimping lines that are matched b five jimping lines on the butt corner of the spine. These give your thumb (when in a traditional grip or reverse grip) the perfect texture/grip spot so you can keep control of the knife when making heavy piercing cuts. The front edge of the handle has two very shallow finger grooves or curves that allow for nice finger placement. Built tough, the anodized aluminum handle is going to wear extremely well and stand up to the difficult environmental conditions that so many of our LE and Military find themselves operating in.

The slide trigger is grey anodized aluminum with a series of grooves for maximum traction. It is perfectly placed for easy access. The tip down pocket clip is black finished and can be switched for right/left carry. It is very close to being a deep carry clip.

Benchmade produces all the Heckler and Koch knives. The H&K line, like every knife from Benchmade, is manufactured in the US. At under $200, this quality double action out the front automatic knife is the kind of knife you want on hand when you are operating in hostile territory. If you need a reliable knife that you may just need to stake your survival on, the Benchmade Knives Tumult is a clear winner in the OTF category.

There are no reviews for this product, to write a review click here.