No flashlight is simply just a flashlight—each one has been designed for a different task or purpose. While you may have a lot of basic flashlights around your house for your simple chores, the Olight Freyr RGB has been designed as a serious work flashlight; one that is perfect for military, police, outdoor, search and rescue, as well as traffic control. This flashlight is anything but basic, one that is going to be able to accomplish tasks that your simple at-home flashlights can’t even compare to. The flashlight has a high max output of 1750 lumens, a run time of 15 days, a beam distance of 1181 feet, is water resistant, and even has 6 different modes that include 3 color modes. All in all, if you are in the rescue busines, military, or police, this is a flashlight that you are going to want to have on hand.

The Lumens and Candela:

To fully have a grasp on how quality of a flashlights this Olight Freyr is, it is critical to understand at least a little bit of the science that backs it. First of all, we need to understand what a lumen is. In layman’s terms, a lumen measurement is the measure of the intensity of the light that comes out of the flashlight. This is measured on the highest brightness setting, so that you get peak intensity. For reference, 20 lumens is a great flashlight if you need it for a simple at-home task, or is the measure of lumens that would typically be found in a desk lamp. This flashlight has a maximum output of 1750 lumens, which is clearly much, much brighter than your desk lamp. This means that the brightness that extends out of the Freyr is going to be seriously intense. It’s not hard to see why this flashlight is such a good option for search and rescue, police, or other outdoor activities.

The next bit of science that should be understood to fully appreciate this flashlight is to understand what a candela is. While a lumen is the measure of the total light that is emitted, a candela is measuring how intense the light is in one direction. This means that while a lumen is more of a broad measurement, a candela is a more intense, focused measurement. A standard household lightbulb has about 135 candelas, because there isn’t necessarily a point in having a house lightbulb focus intesely in one direction. This Olight flashlight on the other hand has a candela rating, or peak beam intensity of 32400 candelas. This is crazy intense and will give you a focused beam of light for signaling, directing traffic, or even just lighting your way.

Finally, the beam distance on this flashlight is 1181 feet, which is pretty far. Of course, once you get that far away, you aren’t going to be getting your maximum lumen or candela rating, but you are still going to be able to see. The further away you get from the source of light, the less intense of a lumen and candela rating you are going to have. That being said, 1181 feet is super far. This allows the Freyr to be a fantastic option for signaling, which we will talk more about in the modes section.

Not only is the brightness behind this flashlight seriously impressive, but so is the max runtime. This flashlight can last for up to 15 days. Chances are, you won’t need it to run this long, especially if you are using this as a police tool, traffic directing tool, or for your basic outdoor needs. However, it is important that the Freyr has such a long run-time, because one of the biggest advantages of this flashlight is the capability of signaling with it. A signal is worthless if it is going to run out of batteries. It is highly unlikely that with a runtime of 15 days, you are going to be left stranded. Especially since the runtime is the measurement of how long the flashlight is actually turned on for.

While the long run time is important for signaling, it is also important for search and rescue. This is the most likely scenario where you are going to need to be actively using the Freyr for long periods of time. This max runtime ensures that you will be able to rely on the flashlight and you won’t be having to deal with charging or switching out flashlights when every second counts.

The water resistance level of the Freyr is an IPX8, which means that it is can actually withstand continuous immersion in water. The typical rating for IPX8 is that it can be submerged to 1 meter, sometimes deeper, and for at least thirty minutes without breaking. This does not necessarily mean that it can work while underwater, but rather, that even if it does go underwater, you will still be able to effectively use it once it is removed.

This is a critical characteristic that the Freyr boasts, because the target purposes of this flashlight are going to come in contact with a lot of different environments. If you need to direct traffic in stormy weather, this flashlight will work. If you are out doing outdoor activities and happen to drop it in a river, lake, or other body of water, you aren’t going to be totally out of luck. This feature is especially important for those who are going to be using this flashlight for signaling as well as search and rescue, because you do not want to be left with a dead flashlight due to water in these high-risk, time-sensitive situations.

This waterproof rating is just another reason that this is such an exceptional flashlight. 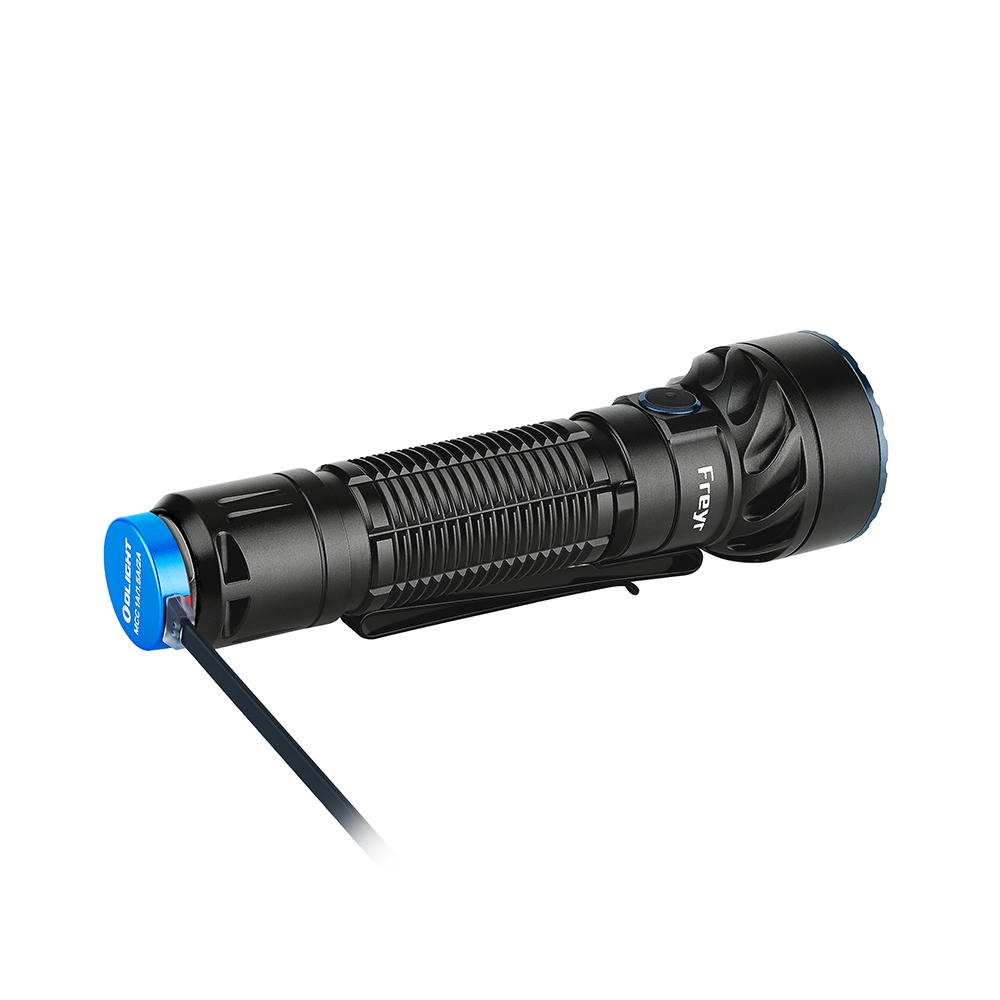 The battery on this flashlight is a customized 5,00 mAh 3.6V 21700 Rechargeable Lithium-ion Battery. The Freyr recharges directly through the tailcap with the included magnetic USB cable. This is a great charging option because it means that you don not have to worry about batteries. The charging cable also helps with the water resistance level, because the customized battery is not a typical battery. It also means that there has to be less openings where water can seep through, because you will never be changing the battery—just charging the flashlight.

The other advantage about having this flashlight charge instead of use batteries is that extra batteries can be heavy and clunky, especially when you are trying to pack light. Instead, all you need is your charging cord, and you are good to go.

Finally, in terms of charging, there is a battery level indicator on the side of the flashlight. This will light up green, orange, or red, depending on what your battery level is. This is one last detail to ensure that you are never left stranded without a charge unexpectedly.

The Olight Freyr features 6 different modes, which includes four different colors. You have your basic white light, but this flashlight can also light up in red, green, and blue colors. This feature seriously sets the Freyr apart from the competition. In fact, this is what blows the competition out of the water. The different colored modes are perfect for different scenarios. From tactical to protecting night vision to signaling, there is a color for any situation that you may find yourself in. Let’s break down the different colors:

Red: red lights are used for quite a bit. First of all, red is going to help you see in the dark, because it minimizes the brightness of the white light. Red also minimizes you getting noticed from a distance, which can be critical if you are using this flashlight for tactical scenarios. The best advantage of this is that red allows you to work in the dark without ruining your night vision, which can be critical for search and rescue or other tactical situations.

Green: Our eyes are actually very sensitive to green light, which allows you to easily navigate int eh dark. Green, like red, also works to ensure that you don’t lose your night vision when using the green light. Finally, this is a great mode if you are a hunter, because most animals don’t see the green color spectrum well which means that you can see the game without disturbing them.

Blue: one of the biggest benefits of the blue light is that you can shine it in the water when its dark outside and the blue does not create a glare. It also allows you to see clearly into the water. This feature is important for safety when outdoors, but it’s even better for search and rescue purposes.

The three colors allow you to react correctly in every situation. Plus, you have your basic white light, which means that you could also use this flashlight as a standard flashlight.

There are many advantages to the Olight Freyr flashlight because each and every detail on this flashlight has been intentional and elevates it further. For starters, this is a tough flashlight design with some serious grip in it. The entire middle of the handle has larger grooves going across the width of the middle that extend the entire length of the handle. This ensures that no matter what environment you are in, no matter how slick your hands get, you are going to be able to have a firm grasp on this flashlight.

The next largest advantage to the Freyr is that it has different modes. These include LED type: high performance cool white LED, high efficiently 635nm red LED, high efficiently 515nm green LED, and high efficiency 470nm blue LED. With the various modes that this flashlight offers, there is not going to be a single situation where you don’t have the right light for it. From protecting night vision, to seeing in the water, to your basic white light, this flashlight has it all. Another big advantage is that it comes with a white silicone signaling cone, which allows you to do a whole lot with. It is starting to seem that you can do practically anything with this flashlight at your side.

Further, this is an intense light. It has a maximum output of 1750 lumens with a peak beam intensity of 32400 candela. The peak beam intensity is 1181 feet, which is plenty for anything that you want to do. Lastly, this battery has a maximum runtime of 15 days, which is a crazy long run time, sure to provide you with enough time for even your longest of outdoor tasks.

Lastly, this flashlight has a water resistance level of IPX8, which means that it can be fully submerged without breaking.

The Olight Freyr tactical flashlight features 6 modes including 3 color modes, red, green, and blue, that can be sued for various signaling efforts. The boy is black aluminum and built tough for the outdoors. The Freyr can cast a 1750 lumen beam up to 1181 feet which makes it perfect for military, police, outdoor, search and rescue, as well as traffic control.

The Freyr recharges directly through the tailcap with the included magnetic USB cable. It has a bi-directional pocket clip for easy attachment. This is the first Olight flashlight that delivers both normal white light as well as the 3 helpful RGB lights for night vison protection, investigation, or signaling. This is also an ideal flashlight for directing traffic or marking a potential danger with the included traffic wand.

Order yours today from BladeOps to be prepared for anything.