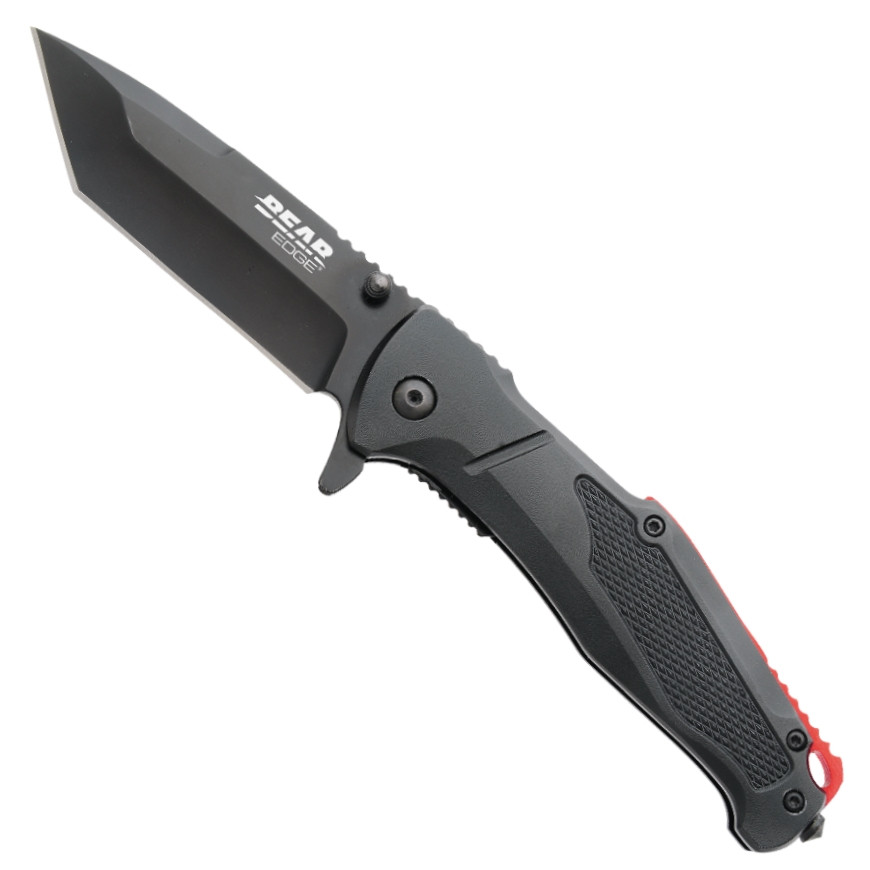 Bear & Son says, “We have a skilled and experienced work force capable of performing many of the extra hand operations that go into the making of our products. The Bear & SonCutlery factory is unique. It is full self-contained. While some companies only assemble parts brought from various suppliers and put their names on the product, we do everything in-house from building our own blanking dies to heat treating, grinding and assembly, and hand finishing our products. These steps ensure that Bear & Son Cutlery is of excellent quality and a real value for both the dealer and consumer.

This commitment to excellence has just improved due to rich family tradition in knife making craftsmanship not only by management, but also our experienced work force. Our customers and consumers can look for even more new and exciting products as a result. Our ongoing commitment is to make them in America and make them affordable. We want everyone to be able to afford what we are proud to make!”

This is a family owned company that came to be in 1991 when Ken Griffey and two partners bought the Parker Edwards knife facility. After a ride filled with turns and surprised, including a time when the firm actually was owned by Swiss Army Brands, Ken Griffey still heads the operation as president. His son Matt, who began to work in the factory when he was only 18, is vice president.

One of Bear & Son Cutlery’s biggest advantage and selling point is that 100% of their high-quality knives are made in their state-of-the-art Jacksonville, Alabama plant where they perform each part of the knife making task.

“Our fundamental position is clear and absolute: we make high-quality knives, and we make them all right here in the U.S.A.,” said Ken Griffey. “And when we say Made in American, we mean everything—the steels, every component right down to the tiniest screws, and of course, every step of manufacturing. We’re a family company, and we are dedicated to keeping it exactly that way.”

Bear & Son offers a wide range of knives—from big Bowies to popular Butterflies, Bear & Son covers almost any knife that you could want. And you know that if you purchase one of their knives, you know that you can trust it.

Bear Edge is a division of Bear & Son Cutlery that is making its debut this year. Today we will be discussing the Bear Edge Pattern 121, which is a new release at BladeOps.

The blade on this is made out of 440 stainless steel. The blade on this knife is made out of 440 high carbon stainless steel. This steel is a relatively low cost, highly corrosion resistant stainless steel. This steel is used in many production knives because it has a good balance of edge retention and it is easy to re-sharpen. This is a good all-round steel that has now been overshadowed by many of the newer super-steels on the block. Because it is a high carbon, but still a stainless steel, you get a wide variety of benefits. The stainless-steel aspect of this steel is that they generally have at least 12% chromium, which does tow things. For starters, it makes the blade able to resist rust and corrosion a lot better than high carbon blades, but it is going to be softer than a carbon steel. Because 440 steel has a high level of carbon, it is not going to be as soft as a regular stainless steel. With the high carbon aspect of this steel, you get strength and hardness which means that it is going to retain an edge for long periods of time. Overall though, with this steel you are going to get a blade that can get the job done. You are going to be able to rely on this blade to last when you need it to and to not break or chip. However, you should keep in mind that you do get what you pay for, so when being compared to other newer types of steel, it isn’t going to measure up.

The blade on the Pattern 112 has been finished with a black coating. This finish is an ideal option for a tactical knife such as this one. This is because it increases the corrosion and wear resistance of the blade immensely. This is because it forms a barrier in between the steel and the environment. So, an already corrosion resistant steel, becomes even more corrosion resistant and requires less maintenance.

The next reason that the black coating is a great option for a tactical knife is because it will cut down on glares and reflections. It is a matte black coating, so no reflections are going to give away your position when you are using this knife in the field.

The tanto knife has a high point with a flat grind, which leads to an extremely strong point that is perfect for stabbing into hard materials. The thick point of the tanto blade contains a lot of metal near the tip, so it is able to absorb the impact from repeated piercing that would cause most other knife blade styles to snap. The front edge does meet the unsharpened edge at an angle, rather than a curve. Because of this, the tanto blade style does not have a belly whatsoever, but instead, you have an extremely strong tip.

This knife does not make a good all-purpose knife because of the lack of belly, which means that you will not have many slicing capabilities. With this Bear & Son knife, you will not be ready to take on all of life’s challenges, but you will be able to take on any situation that you need to pierce through any type of hard material.

The handle on the Pattern 121 is made out of aluminum, which is a popular knife handle material. It is both lightweight and durable. It has been anodized black, which creates an all-black knife, except for the red back spacer and lanyard hole. The anodization improves all of the good qualities of the aluminum, creating a stronger, more corrosion resistant, and more durable material. 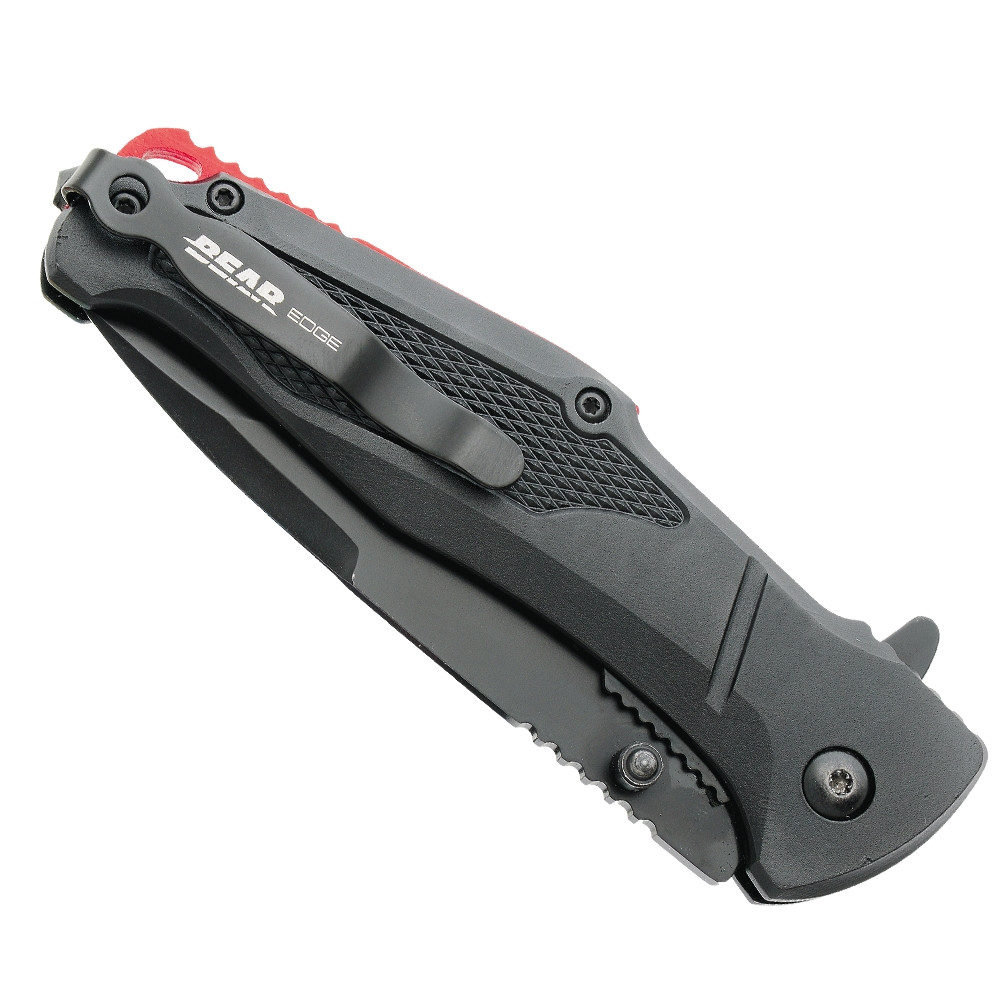 This clip has been designed for tip up carry only, but it is eligible for either a left- or right-hand carry option. This helps to make the Pattern 121 more ambidextrous friendly.

The clip itself bulges out near the middle and dips right under that. The dip is going to help push the clip against your pocket, which will help it stay more securely as well. In the middle of the clip, “Bear Edge” has been stamped in silver. The clip is kept in place by a black screw, which does match the rest of the hardware on the knife.

A spring assisted knife is a type of folding knife that uses an internal mechanism to finish the opening of the blade, only after the user has partially opened it. This means that it is not an automatic knife, but it does openly smoothly and quickly like an automatic knife would.

The flipper is a small, rounded triangularly shaped protrusion that extends off of the blade and out of the handle when the blade is closed. You can pull back on this protrusion, which will swing the knife open and lock it into place. There are a couple of things that make this a safe and preferred mechanism for opening the knife.

For starters, it does not put your fingers in the path of the blade when you are swinging the blade open. This does mean that it is safer to use than a knife with a thumb stud. Another aspect of safety is that once the knife is opened, the flipper acts as a finger guard. Another thing that people love about the flipper is that it does not get in the way when the knife is opened. Some people feel as if the thumb stud gets in the way when they are trying to use the knife, because it extends off the front of the blade. While the flipper is a little bit harder to get the hang of, it is a great option for your opening mechanism.

The thumb stud is the most common opening mechanism. It is a small stud that sits on the blade. You use your thumb to push the blade open with this stud, where it will lock into place. The thumb stud is easier to use and easier to get the hang of than the flipper, but it is slightly less safe, per the reasons mentioned above.

The blade on this knife measures in at 3.375 inches long with a handle that measures in at 4.625 inches long. This creates an overall length of 8 inches long, which is on the larger side of the spectrum. The knife weighs in at 3.9 ounces, which is an ideal weight for an EDC. This knife was made in the United States of America, so you can feel proud to own, carry, and use this knife, knowing that you provided another American with a job as well as being able to trust the quality of the knife.

Bear Edge, a division of Bear & Son Cutlery, is making its debut this year--offering high quality products that utilize mostly imported parts that are proudly assembled in the USA. This spring assisted features a liner lock designed model, complete with back lock release and integrated glass breaker, as well as a stainless-steel blade that is rapidly deployed with either of the thumb studs or spine flipper tab. This model features black aluminum handle scales with red back spacer, stainless steel liners, a tanto style blade in a black finish and the deep carry reversible pocket clip is designed for tip up carry only but is eligible for a left- or right-hand carry option.

You can purchase the Bear Edge Pattern 121 today, or you can shop all Bear & Son brand knives here.