Benchmade knows that to make a good knife, there are a few key elements. They say, “Our knives are made of many things: steel, aluminum and titanium, to name a few. But perhaps the most important part of a Benchmade knife is expertise. We carefully measure every part at every step in the process. We use the best materials and equipment.”

The very first step in a blade’s life is at laser cutting. Each Benchmade knife begins as a sheet of steel. A laser cutting technician programs the laser to cut the steel into blanks, giving the blade its basic profile. The blanks are hammered out of the sheet by hand, and for the first time, the steel begins to look like a knife. The blanks are measured to make sure they meet specifications. Measurements are taken every step of the manufacturing process to guarantee an impeccable knife and streamline production. If a part isn’t “up-to-spec”, it doesn’t become a Benchmade.

The second step in any knife from Benchmade is surface grinding. This is where the blank is ground to its precise width. A surface grind technician places each blank in its rack by hand (racks vary by the number of blanks they can hold at one time), and each side is ground to its specified thickness. After grinding, the technician checks the thickness of each set of blanks. Benchmade says, “Tolerances are within the width of a human hair. Our knives have no room for error, and neither does a blank’s thickness.”

The third step in the knife making process is milking. Blade holes, handles and grooves are cut on high-speed mills. For every job (or batch), the blade milling technician programs the mill and measures the blade or handle to make sure it meets our precise tolerances. Blades and handles differ from knife to knife, so the technician gathers a specific set of measuring tools for each job. One of the holes that is cut here is the blade pivot, which is crucial to the folding mechanism. The pivot tolerance is .0005 inches, because the slightest deviation there becomes exponential at the blade’s tip. Handles require the same precision in order to fit the liners and blades properly and ensure a smooth mechanism.

The fourth step is beveling. Now the blade starts to really take shape. Up to this point, the two sides of the blade are essentially flat. A Blade Beveling Technician bevels the knife blank one side at a time, and one of the most critical tasks here is to make sure the sides match perfectly. Once again, the technician measures the blade to verify that it meets the specified tolerances. An imprecise bevel can hamper the blade’s balance, sharpness, strength and mechanism function.

Fifth is back-sanding, which is where the back of the blade gets special attention. Since the original laser cutting, the back has been mostly untouched. Along with back-sanding is the finishing step. Finishing is the step that gives the blade a more refined look. When the blade is cleaned up, it is taken to lasermarking to receive its one-of-a-kind Benchmade mark.

The final two steps are assembly and sharpening. Each Benchmade knife is assembled by hand. Benchmade says, “It takes longer to master blade sharpening than any other skill. A sharpening technician puts a razor edge on the knife using a standing belt sander, and this step takes extraordinary concentration. Each blade is sharpened to a targeted 30-degree inclusive angle, 15 degrees on each side. The knife is sharp enough when it can cut through ultra-thin phonebook paper effortlessly without tearing. And only then is it truly a Benchmade.”

Today we will be discussing the Benchmade Autocrat OTF automatic knife, which is currently in stock at BladeOps.

The blade on the Autocrat is made out of CPM S30V stainless steel, which is produced by Crucible Industries. Crucible is known for making high end steels specifically for high end knives, such as the ones that Benchmade creates. 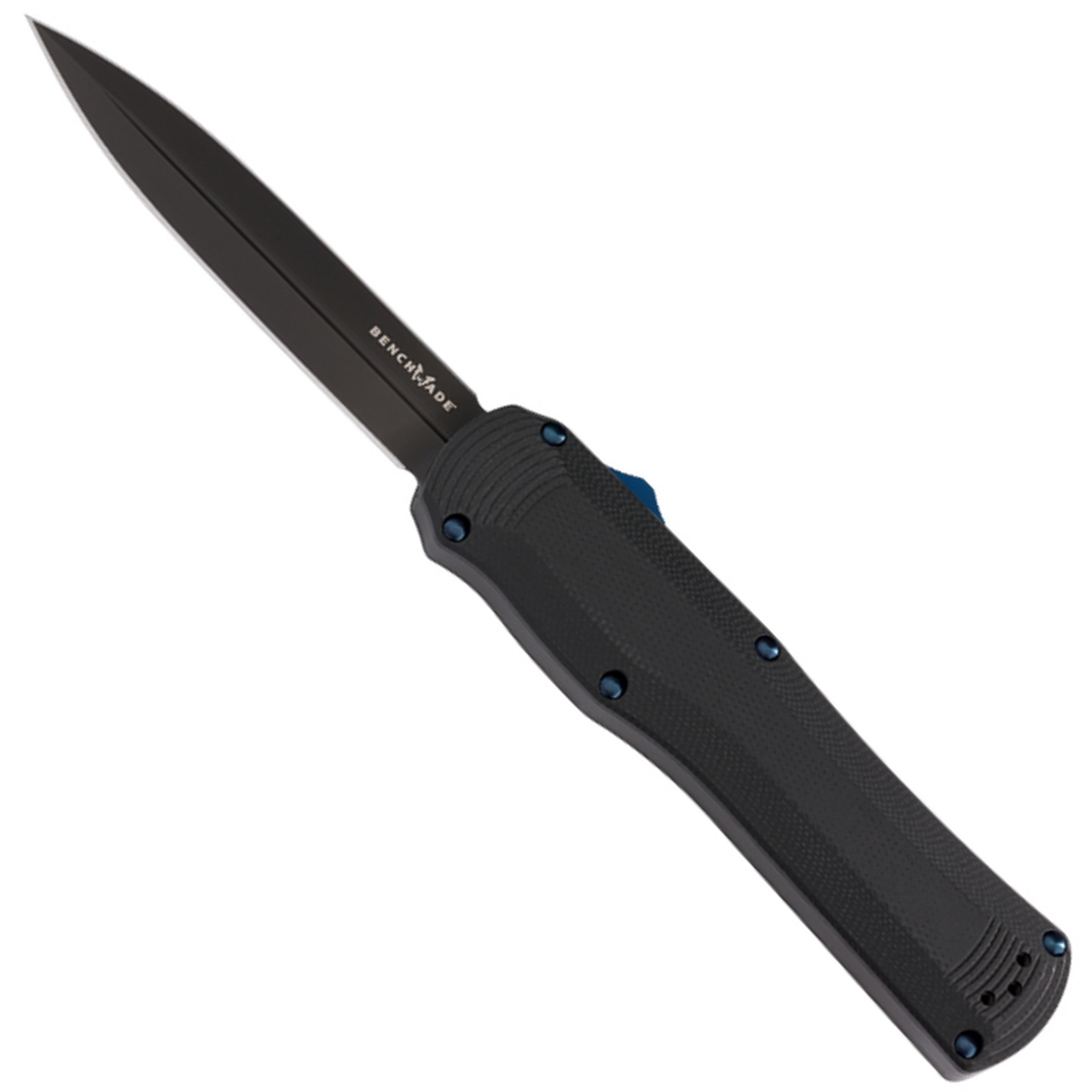 The steel is a fan favorite and is known for having a nearly perfect balance between hardness, toughness, and edge retention. While this balance has been attempted by other manufacturers, Crucible is one of the only ones that really nailed it. This is a complicated balance to achieve because you need the steel to be pretty hard to retain its edge, but the harder the steel is, the less tough it is going to be. Crucible did it though and CPM S30V is a fantastic steel because of that.

Not only does it have a great balance of those characteristics, it also has high corrosion and stain resistance. This is standard when it comes to stainless steels, but CPM S30V is going to have a slightly higher stain resistance than standard.

All in all, the steel seems like an option that you cannot go wrong with. Unfortunately, it does prove tricky to sharpen. This is a hard steel without a fine grain structure, so getting a razor-sharp edge does prove complicated. A professional sharpener will be able to do it, but a beginner will not.

The blade has been finished with a DLC coating, which stands for Diamond-Like-Carbon coating. This is the hardest coating that you are going to find in the cutlery industry. It is known for being rock hard, increasing both the strength and the durability of the steel. The DLC coating is also pitch black, which is going to cut down on all glares and reflections, while also adding a sleek black color to the blade.

The other crucial aspect of a DLC coating is that it is normally applied through a PVD process, which is when it is applied through a vapor deposition process. This ensures that the coating goes on as smooth as can be. This is an important feature, because the smoother the coating, the less friction there is going to be, and the easier you are going to be able to slice. This coating is one of the highest end coatings you can buy, so you can be sure that it is as smooth as can be.

While this is a great option, it does have a few disadvantages. The first is that it does not have a belly, which does mean that it is not going to make a great all-purpose knife. Also, because the tip is so fine, it can be prone to breaking when used on harder targets.

Both edges have been sharpened into plain edges. These will give you cleaner cuts. The plain edge will also allow you to more easily sharpen the blade, which can be important with the S30V steel.

The handle is made out of black G-10. This is a material that is made out of fiberglass. To make the material, the manufacturer takes layers of fiberglass cloth and soaks them in a resin. The next step is to compress them and bake them under pressure. This creates a very tough, hard, lightweight, and strong material. This is a very similar material to carbon fiber, but it is inferior and can be had for almost a fraction of the cost. The overall pros to this knife handle material is that it is going to be tough, light, and durable. Unfortunately, it is also brittle, and some people feel like it lacks elegance.

The handle is standard for an OTF knife. It is mostly rectangular, with a slight bulge near the upper section of the handle. The butt of the handle also flares out slightly and is rounded. The flare of the handle gives you a little bit of a better grip.

The G-10 has been textured on the sides of the face of the handle, which will provide better grip for the tougher tasks. Near the top and the butt of the handle, there are small grooves carved into the G10, which gives you more control over the knife while you are using it.

The Benchmade Autocrat sports a reversible deep-carry pocket clip. The clip can be attached for either left or right-handed carry, which makes the Autocrat more comfortably for your daily use. This is an OTF knife, which does mean that the pocket clip can only be attached for tip down carry, which shouldn’t’ be that big of a drawback. In fact, carrying a knife tip down is actually the safer way to carry a knife.

This is a deep carry pocket clip, which means that the knife will sit lower in your pocket. This does two things. First, it allows the knife to be better concealed. Second, it ensures that the knife is going to stay more securely inside of your pocket. You will be able to freely move about your day without worrying that you are going to lose your knife.

The Autocrat sports blue sapphire titanium-oxide PVD-coated hardware and components. This gives the all-black knife a bit of oomph.

This is an automatic out-the-front, or OTF, knife. The automatic characteristic does mean that it is not going to fall under a set of laws that do limit the legality of the knife. These laws span the US and automatic knives are not legal in many states, cities, or areas. It is your responsibility as the knife purchaser and user to know your local knife laws. BladeOps is not the responsible party.

The Autocrat is an OTF knife, which means that there is a hole in one end of the handle that the blade will be deployed from. This differs from many pocketknives that have the blade fold out of the side of the handle. The trigger to deploy the blade is the blue sapphire titanium-oxide PVD-coated. It is slightly stepped, which will give you a bit better of a hold on it, while you are attempting to deploy the blade.

This out-the-front model features a black G-10 handle, a dagger style blade in a DLC black finish and a reversible deep-carry pocket clip.

The latest double-action out-the-front model from Benchmade was designed for tactical and EDC enthusiasts alike. Sporting a spine-fire style switch and blue sapphire titanium-oxide PVD-coated hardware and components, this knife will give you both convenience and a tactical advantage should the need arise.

This Benchmade is currently in stock at BladeOps. To secure yours today, click here.