For over thirty years, Benchmade has been designing and manufacturing world-class products for world-class customers.

When Benchmade was founded, the mission was to create something better; something exceptional. Today, they continue to innovate with the goal of taking performance and reliability to the next level. To exceed what is expected.

Benchmade says, “Whether you are using a Griptilian® for every day duties or taking the fight to the enemy with the Infidel®, our knives are built to perform. When you choose to purchase a Benchmade, you do so because you want the best. You demand it. And programs like our LifeSharp Lifetime Service and Warranty are the foundation of our commitment to excellence. We live it and breathe it, and we know what you mean when you say: It’s not a knife. It’s my Benchmade.”

Their ideal knives start with ideal materials. Benchmade builds knives for the most demanding customers, from special operations forces to elite backcountry hunters, and building for the best requires the best raw materials. Benchmade says this about their materials, “We select premium blade steels and pair them with aerospace-grade handle materials to create premium-grade knives and tools that provide great value for our customers.”

The next thing that makes Benchmade knives so top notch is their mechanisms. The mechanics of opening and closing a knife are essential to its function. Benchmade asks themselves questions like Is it easy to actuate? Can it be opened with one hand? Is it ambidextrous? Will it absolutely not fail when you need it the most? They ask these questions because they are critical considerations when it comes to the mechanism.

Next is how they manufacture. The Benchmade factory employs modern laser cutters and CNC machining centers that offer control and tolerances commonly found in the aerospace industry – often to tolerances half the width of a human hair. Their commitment to modern machining techniques and rigid quality control has allowed Benchmade to bridge the gap between custom and manufactured.

The last thing that makes Benchmade really unique is their LifeSharp service. Benchmade describes this, “Benchmade knives are all supported through a team of skilled technicians. Their only function is to ensure your Benchmade is in optimal working condition for your entire life. This service is called LifeSharp®. A name that speaks for itself. When you send your knife to the Benchmade LifeSharp team, the knife is completely disassembled and all worn parts are tuned or replaced. The knife is then lubricated and reassembled, a sharpener applies a factory edge to the blade and the knife is shipped back to you. All at no cost to you.”

Today we will be discussing the Benchmade OD Green Turret folder knife.

The blade on this knife is made out of CPM S30V steel. This steel is made by US based steel company, Crucible Industries. They are known for making high end steels. Crucible even designed and made this steel with high end knives and kitchen cutlery in mind, which means that you are going to get all of the best knife qualities that you could ask for.

For starters, this steel resists rust effortlessly. This is perfect for this flipper knife, because you know that it will be low-maintenance. Second, this steel maintains an edge very well. This steel is known as having the best balance between hardness, toughness, and edge retention. This is a tougher balance to achieve than it seems like it would be, because the harder the steel is, the less tough the steel is going to be. Crucible could achieve this balance because they added Vanadium Carbides into the steel, which brings the extreme hardness out of the steel matrix, but doesn’t reduce its toughness.

This steel does have one major drawback, which is that because it is so hard, it is going to be tricky to sharpen. This shouldn’t be too big of an issue, but a beginner sharpener is probably going to have a tough time with this steel. 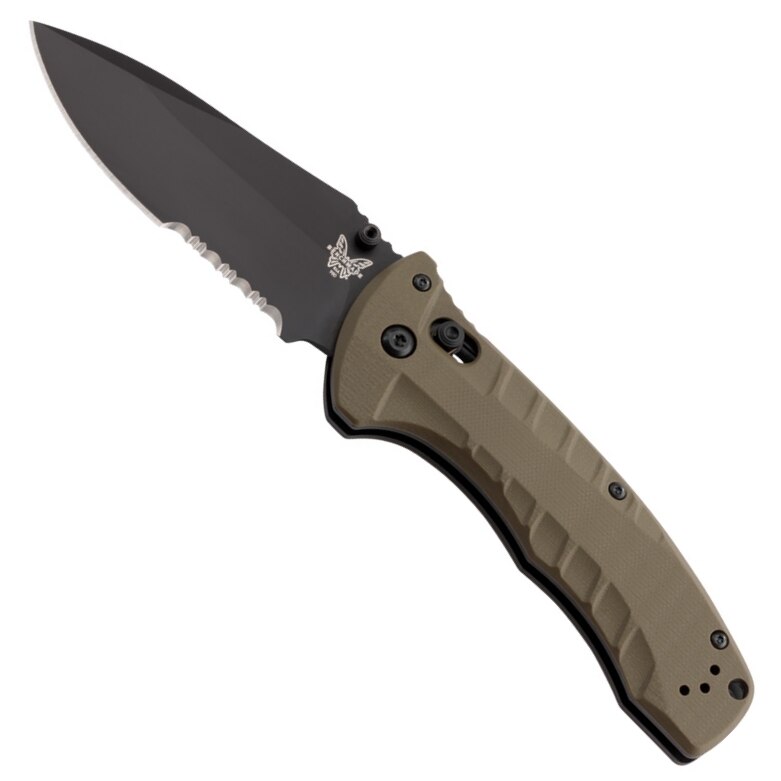 The blade has been finished with a black coating. Like all coatings, this one is going to prolong the life of the blade because it creates a barrier between the environment and the steel. It increases both the corrosion resistance as well as the wearer resistance of the steel. It also reduces the glares and reflections that the blade would encounter.

When the coating is applied evenly, it cuts down on the friction, allowing the blade to cut more smoothly. However, when the coating begins to peel or scratch off, like all coatings will eventually do, the blade is worse off than if it had never been coated.

The blade is a drop point, which is one of the two most popular finishes in the cutlery industry. The shape is created by having the spine of the edge go from the handle to the point in a slow curving manner. This creates a lowered point, which is what is going to give you so much control over your cuts and slices. This is also where the blade shape gets its name from, because it is lowered, or “dropped”.

The point is not only lowered, but also wide, which is what is going to give you the extreme strength from this knife. The broad tip allows the knife to take on tougher tasks, which is what makes the drop point blade shape a great option for a survival or tactical knife. Because the tip is broader, it is able to withstand things that the other blade shapes would not be able to.

The drop point knife is also very versatile, because of the large belly that makes slicing a breeze. The larger the belly, the easier it is going to be to slice.

The drop point blade shape really only has one drawback, which is because of the broad point, it is not going to be super capable of piercing and stabbing. This usually isn’t’ too big of a drawback, because you do get so much extra strength from the broadness of the tip.

The blade features a combo edge. This is where the first third of the blade has been carved into a serrated portion while the second two thirds have been sharpened into a plain edge. The point of a combination edge is that it is going to give you the best of both worlds. You can use the plain edge for the fine detail work, while the serrated portion can be used for sawing through thicker materials. One of the only drawbacks is that some people feel that each of the portions is too small to actually benefit from.

The handle on this is made out of OD Green G-10. G-10 is a man-made material that is tough, strong, durable, and lightweight. There is enough texture on G-10 to give you a solid grip. One of the only drawbacks to G-10 is that it does suffer from being brittle.

The handle has a spine that gently slopes form the blade to the butt, which is mostly squared off. The butt of the handle does have a lanyard hole on it. The belly of the knife has a finger groove as well as a finger guard.

The pocket clip is designed for tip up carry only, but it is eligible for either left or right handed carry option. This does mean that it is going to be ambidextrous friendly. That being said, tip up carry is the less safe way to carry the knife. The hardware on this knife is all black, which matches the blade.

This knife has been equipped with the AXIS lock as well as a dual thumb stud. When Benchmade talks about the AXIS lock they say, “A patented Benchmade exclusive, AXIS® has been turning heads and winning fans ever since its introduction. A 100 percent ambidextrous design, AXIS® gets its function from a small, hardened steel bar that rides forward and back in a slot machined into both steel liners. The bar extends to both sides of the knife, spans the liners and is positioned over the rear of the blade. It engages a ramped tang portion of the knife blade when it is opened. Two omega-style springs, one on each liner, give the locking bar its inertia to engage the knife tang. As a result, the tang is wedged solidly between a sizable stop pin and the AXIS® bar itself.”

The knife has been equipped with a dual thumb stud, which means that the thumb stud can be accessed from either side of the blade. This also makes it ambidextrous.

Some of the other benefits is that it allows you to smoothly open the knife, plus, you can do it with only one hand.

The last drawback to having a thumb stud as the opening mechanism is that some people do feel that it gets in the way when they are trying to use the blade.

The new over-sized and overbuilt Turret was made for extreme conditions and was built to last till the end of days. Excellent ergonomics, including a pronounced positive thumb ramp, are only overshadowed by the creme de la creme of locking mechanisms--the AXIS® lock. First introduced in 1998, the AXIS® lock has been at the forefront of locking mechanisms with an average of 1640 in. lbs. of torque before any deformations occurred. {{Enter jaw drop here}}. Each Turret folder knife utilizes Benchmade's AXIS® lock mechanism which is a fully ambidextrous operating system utilizing a dual thumb stud design to effortlessly deploy the blade. This Black Class model features olive drab green G-10 handle scales, a partially serrated drop point style blade in a black finish and the reversible pocket clip is designed for tip up carry only but is eligible for a left or right hand carry option.

You can shop for all our in-stock Benchmade folder knives right here.