Today we are going to be discussing the Boker Blue Sub Kalashnikov Automatic knife, this version is exclusive to BladeOps.

The blade on this Sub Kalashnikov has been finished in black. This is a sleek look that really ties the whole knife together. This Boker also features all-black hardware, which coordinates with the blue handle perfectly. The rich blue and the deep black are the ultimate combination. Other than looks though, the black is a great option because it is going to cut down on glares and reflections. This means that no light reflection is going to give away your position if you happen to be using this in the field.

Lastly, the black creates a very smooth finish to the surface of the blade, which is going to make slicing with it even easier and smoother. 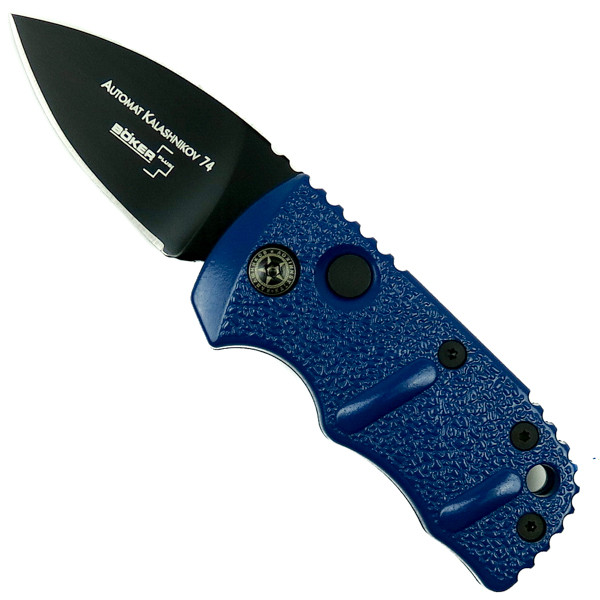 The blade has been carved into a drop point blade shape, which is the most popular blade shape on the market to date. This is because of how tough and versatile it is. For starters, the spine of the blade curves from the handle to the tip in a very slow, but rounded, curve. This creates a dropped point, which is where the blade shape gets its name from. That is not the only thing that the dropped point does though, it also gives you better control over the blade while you are working with it. This is a tiny knife, but you will be able to perform some fine detail work with it. In fact, you will be able to really excel at the fine detail work, because the point is lowered, and the blade is small.

The last reason that the drop point is such a popular option is because the belly has a large curve to it. This gives the blade more cutting surface, which is going to make slicing a total breeze with this knife. The belly’s curve is pretty rounded compared to other drop point blades, which will make cutting easier, as well as it adding to the aesthetic of the tiny knife.

The handle is made out of a blue aluminum. Aluminum itself is a widely popular option for high-quality knife handle materials. Aluminum is tough, durable, incredibly corrosion resistant, and best of all, it is lightweight. However, it is also prone to getting scratched.

Aluminum is known to be a low-density metal, which is where the low weight of the handle comes in from. A low-density metal is a metal that is going to provide you with the heft that you need to take on all of your tasks. It is not going to make you feel that you cannot rely on the handle—instead, it is going to give you enough heft in your hand that you feel confident. Confident enough to take on whatever comes your way. Confident enough to rely on the Boker knife. That being said, it is not going to weigh you down. This is a smaller knife, so any of the heft that you can get from the handle is going to be appreciated. 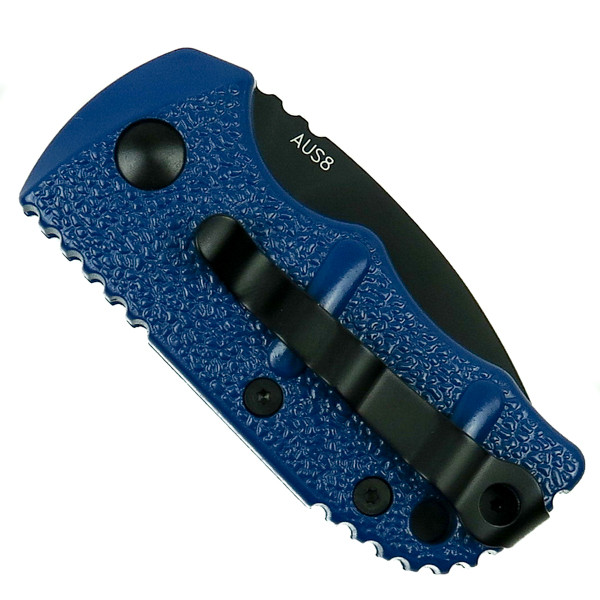 The pocket clip on this Boker is extra-long and deep carry. In fact, it extends nearly the entire length of the handle. This means that you will be able to easily go about your day without worrying about whether or not this knife will stay inside of your pocket. The clip has been statically designed for tip up carry only on the traditional side of the handle. This does mean that the knife is not completely ambidextrous friendly. The clip is black, which does match both the blade as well as the hardware on this Boker.

This is an automatic knife, which does mean that it is going to fall under a strict set of laws that the US has surrounding automatic knives. These laws state that an automatic knife is not going to be legal in all states, cities, or areas of the United States. That being said, it is your responsibility as the user to know your local knife laws. BladeOps is not responsible.

This is a push-button automatic, which means that at the push of a button, the blade is going to autonomically deploy. One of the major benefits of an automatic knife is that it is going to be incredibly easy to bring into play. There is not going to be any fumbling while trying to open it—all you have to do is push the button and it will swing open and lock into place, ready for use.

BladeOps is excited to announce the newest exclusive model to the ever-growing arsenal of Boker Kalashnikov auto knives--the Sub Kalashnikov featuring a sub-2" blade. Quite possibly the perfect evolution of the most popular Boker automatic series ever, the Sub Kalashnikov boasts powerful push button action, a 1.95" blade, and a full-width handle for a rock-solid grip. This exclusive model features a blue aluminum handle, all-black hardware, a drop point style blade in a black finish and the extra-long deep carry pocket clip is statically designed for tip up carry only on the traditional side of the handle.