The Boker name and logo can be dated back until the 17th century where it seems like the Boker tools were very successful on the markets; the tools were ranked among the leading manufactured goods in Germany and neighboring countries for hundreds of years.

Due to the rising demand in a politically restless era Hermann and Robert Boker decided to start with the production of sabers in 1829. Inventories of September 1830 had already proven a weekly production of 200 pieces made by 64 smiths, 47 grinders, and a large number of workers and trainees. With a permanently growing product line of tools and cutlery and the great opportunities of global sales, the family saw the need to distribute the tasks to make the best use of their interests. SO Hermann Boker emigrated to found Boker & Co. in New York, whereas the younger Robert established his company in Canada and in 1865 a branch in Mexico, being the market leaders under the name of Casa Boker until today.

Heinrich only crossed the river Wupper to go to Solingen, where the German cutlery industry was booming. Together with the well-known cutlery exert Hermann Heuser he founded Heinr. Boker & Co. in 1869.

The Bokers in Remscheid and their cousins overseas were very interested and in demand of razors, scissors, and pocket knives from Heinrich’s new enterprise. They had to label their products in a simple manner for overseas markets, as many customers had problems spelling the German name Boker—apart from the widespread analphabetism. Heinrich considered the chestnut tree as an ideal, memorable logo which belonged to the Remscheid company with an arrow as well. One of the rare and precious documents which survived the total destruction of WW II is an ad of Boker Remscheid from 1874, showing both logos.

The US market quickly became Boker’s most important sales territory. Because of the tree-brand being well established by then and the good understanding within the international Boker family, there wasn’t any problem to get permission from Solingen to use the tree-brand for American made products as well.

Today, there are four lines of Bokers. Boker Manufaktur Solingen, which is the premium collection. Boker Arbolito, which is the tradition collection. Magnum by Boker, which is the line that gives you the best price with the best performance. The Boker Strike Automatic is a member of the fourth group: The Boker Plus collection which focuses on innovation. This lien is in close cooperation with international acknowledged experts form military, police, and security as they develop and test tactical knives for the professional user. Boker Plus Knives are innovative in terms of function and design, as well as guaranteed for everyday use. Conception, design, and construction are carried out in Solingen, and production takes place in Europe, the USA, and Asia.

Today we will be discussing the Boker Magnum Charlie folding knife, which is still in stock at BladeOps currently, but leaving the store soon.

Boker describes this line of knives by saying, “The attractive brand from Boker with a great price-performance ratio. The concept takes place in Solingen, design, construction and finishing in overseas. Magnum offers a wide range of knives from all categories, from traditional pocket knives, to hunting knives and modern knives. Latest lock technologies and knife trends also for price-sensitive customers.”

The blade on this knife is made out of 440A Stainless steel. This steel is a member of the 440-steel family. Also included in this family are the 440B, 440C, and the rarer 440F. This entire family are considered to be fully stainless, 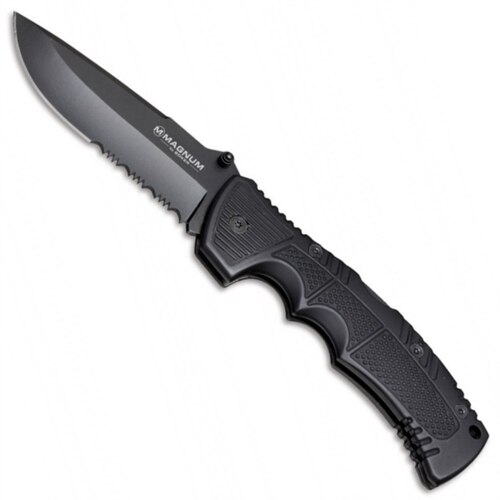 but out of them, 440A does have the highest corrosion resistance. This high level of corrosion resistance is due to the fact that out of the family, it contains the least amount of carbon. This steel is made by heating the steel to 850-900 degrees Celsius and then slowly cooling it to around 600 degrees Celsius in the furnace. Once it has reached that point, the steel is air cooled and then hardened at a temperature of around 1010-1065 degrees Celsius. This steel is quenched in air and sometimes warmed oil. As soon as this steel is finished hardening, it is tempered at a temperature range of 150-370 degrees. The lower the temperature is during this process, the harder the end steel will be.

However, with 440A steel, if the tempering is done at a temperature about 370 degrees Celsius, the impact resistance of the blade will be compromised. When being compared to other kinds of stainless steels, 440A is a very commonly used steel. This is a relatively cheap steel, especially when being compared to the higher end steels.

This steel is often seen on outdoors knives and even diving knives, because the saltier environments do not negatively affect it. In fact, this steel stands up to being submerged in the ocean with very little corrosive effect. Unfortunately, this steel does not have super high wear resistance—which is why this steel is often used on replica weapons.

The blade has been finished with a black coating. Coatings are beneficial to the blade in a few ways. The first is that a coating is going to increase both the wear and corrosion resistance of a blade. This is due to the fact that the coating creates a barrier in between the blade and the environment.

The last major advantage that a coating offers on a knife is that it will make cutting smoother. This is because the coating gets rid of a lot of the friction that you are going to encounter.

Unfortunately, coatings do not stay on as well as other finishes. The coating can and will scratch off after heavy use or time. This depletes the quality of the blade, because it can again corrode, and it does add some friction to the blade.

For starters, the spine of the blade curves very slowly to the point. The gentle slope of the spine does create a slightly lowered point. The lowered point is going to give you slightly more control over your cuts, which may be crucial if you are in the field. The Charlie has been designed to take on some of the toughest things, including skinning game. The lowered point and the control it adds is going to allow you to easily skin game without worrying about piercing any of the internal organs.

The point on the drop point is broad as well. The point is thicker, which also means that it is going to be stronger. This is a crucial aspect of the Boker knife, because it allows you to have the strength and durability to take on some of the harder tasks. The last major advantage of the drop point is how large the belly is. The large belly provides you with plenty of surface area which will allow slicing to be a breeze.

The serrated portion is the lower half. This portion has the teeth, or serrations, that allow you to saw through thicker materials. The point of a combo blade such as this one is to get the best of both worlds. You are equipped to take on the widest number of tasks, because you have both options on the blade. However, some people feel that because each portion is smaller, you can’t actually use either part to its fullest.

The handle has a unique look to it. Just like the blade, the handle has been designed to look tough and edgy. On the spine, there are two separate sections of jimping. These will provide you with a fuller control when using the knife. The butt is mostly squared off, but there is a slight roundness to it. The belly has two deep and jagged finger grooves that will provide you with comfort as well as a better grip. In the butt, there is a small lanyard hole. On the face of the handle, there are four different sections of texture, which will help you to feel confident no matter what task is at hand.

This is a folding knife that has been equipped with a thumb stud to assist you in opening the Charlie. The thumb stud is the most common one-handed knife opening mechanism that you are going to come across. The thumb stud is really exactly what it sounds like: a small stud on the spine of the blade that can be pushed against in order to swing the blade open and lock it into place.

This is a dual thumb stud, which does mean that it extends out of both sides of the blade, allowing this Boker to be more fully ambidextrous. This means that you can access the stud from either side of the blade, which allow both left and right handed people alike to more easily open the Charlie.

The thumb stud is so popular because it does prove extremely easy to use and to get the hang of. However, it is not the safest mechanism that is on the market. This is because when pushing against the stud to swing open the blade, it does put your fingers directly in the path of the blade. There have been plenty of reports of someone carelessly opening a knife with the stud and accidentally slicing themselves. Keep this in mind and always be mindful when opening the Charlie.

The blade on this knife measures in at 3.7 inches, with a handle that measures in at 5 inches long. This creates an overall length of 8.7 inches long, which is a larger knife. This extra length does mean that there is going to be some extra weight; with the Charlie measuring in at 5.2 ounces.

The Boker Charlie is a must-have for those seeking a workhorse that is full of function. This model features a safety-conscious back lock design that uses a rocker arm that pivots in the center--thus allowing the fingers to remain away from the cutting edge while closing. Additionally, the positive thumb ramp and double finger grooves really make it easy for blade deployment and getting to work. The Boker Magnum line of knives are designed in cooperation with knife experts worldwide and provide impressive quality and outstanding price-performance ratio. This model features a black rubberized aluminum handle, a partially serrated drop point style blade in a black finish and, like a true pocket knife, there is no pocket clip.

Buy the Boker Charlie today before it leaves BladeOps for good.