The Boker name and logo can be dated back until the 17th century where it seems like the Boker tools were very successful on the markets; the tools were ranked among the leading manufactured goods in Germany and neighboring countries for hundreds of years.

Due to the rising demand in a politically restless era Hermann and Robert Boker decided to start with the production of sabers in 1829. Inventories of September 1830 had already proven a weekly production of 200 pieces made by 64 smiths, 47 grinders, and a large number of workers and trainees. With a permanently growing product line of tools and cutlery and the great opportunities of global sales, the family saw the need to distribute the tasks to make the best use of their interests. SO Hermann Boker emigrated to found Boker & Co. in New York, whereas the younger Robert established his company in Canada and in 1865 a branch in Mexico, being the market leaders under the name of Casa Boker until today.

Heinrich only crossed the river Wupper to go to Solingen, where the German cutlery industry was booming. Together with the well-known cutlery exert Hermann Heuser he founded Heinr. Boker & Co. in 1869.

The Bokers in Remscheid and their cousins overseas were very interested and in demand of razors, scissors, and pocket knives from Heinrich’s new enterprise. They had to label their products in a simple manner for overseas markets, as many customers had problems spelling the German name Boker—apart from the widespread analphabetism. Heinrich considered the chestnut tree as an ideal, memorable logo which belonged to the Remscheid company with an arrow as well. One of the rare and precious documents which survived the total destruction of WW II is an ad of Boker Remscheid from 1874, showing both logos.

The US market quickly became Boker’s most important sales territory. Because of the tree-brand being well established by then and the good understanding within the international Boker family, there wasn’t any problem to get permission from Solingen to use the tree-brand for American made products as well.

Today, there are four lines of Bokers. Boker Manufaktur Solingen, which is the premium collection. Boker Arbolito, which is the tradition collection. Magnum by Boker, which is the line that gives you the best price with the best performance. The Boker Strike Automatic is a member of the fourth group: The Boker Plus collection which focuses on innovation. This lien is in close cooperation with international acknowledged experts form military, police, and security as they develop and test tactical knives for the professional user. Boker Plus Knives are innovative in terms of function and design, as well as guaranteed for everyday use. Conception, design, and construction are carried out in Solingen, and production takes place in Europe, the USA, and Asia.

Today we will be discussing a BladeOps Exclusive: the Boker Red Sub Kalashnikov. This knife is in stock today at BladeOps, so buy yours today.

The blade is made out of AUS-8 stainless steel. This is an upper mid-range steel that is made in Japan. If you are looking to compare it to another type of steel, your best bet would be to 440B. However, AUS-8 is going to be slightly 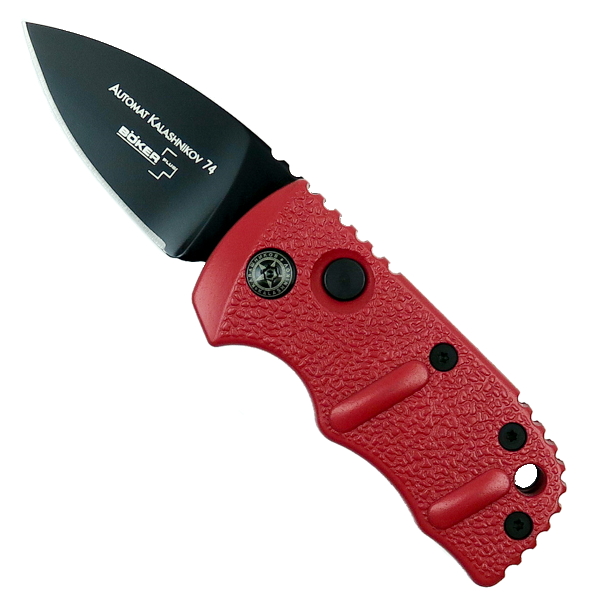 more corrosion resistant. It is also similar to 440C, except that it is a little bit softer than 440C. The extra softness does mean that you are going to have to sharpen the blade more often. This is because AUS-8 stainless steel does have less carbon than some of the higher ranked steels. The more carbon there is in a steel, the better it is going to be able to hold its edge. However, it also means that it is going to be much easier to sharpen when you do need to. It is also a breeze to get a razor sharp edge on this steel. This steel is tough enough to get the job done.

The blade on this knife has been finished with a black coating. The benefits of a coating is that it is going to prolong the life of the blade significantly. It does this because it creates a barrier in between the blade and the environment, which in turn increases both the corrosion and the wear resistance of the blade. This also means that the blade is going to be lower maintenance than it would be without the coating. Also, the coating is going to cut down on glares and reflections that this knife would encounter, which makes it a better option if you are using it as a tactical knife. Lastly, when the coating is applied evenly, it can actually make your cuts soother. This is because it recues the friction that the blade may encounter.

The blade has been carved into a drop point. The drop point is one of the most common blade style because it is so durable as well as being versatile. The shape of the blade is created by having the spine of the knife start at the handle and then curve slowly towards the point. This creates a lowered point, which is going to give you more control over the knife. The tip is also broad, which is what gives you the characteristic strength from the drop point blade shape. This is an important feature for this knife in particular because you are going to want all of the strength you can get for your tactical needs. This is also a versatile blade shape because of the large belly that is provided. One of the only drawbacks to this blade shape is that because the point is so broad, you do lose out on some of your piercing abilities that you would get from a clip point.

The handle on this Exclusive knife is made out of aluminum, which is one of the more common knife handle materials that you are going to come across. It is loved because of how durable and corrosion resistant it is. This allows the handle to be low maintenance, while also being tough. That being said, aluminum does feel really cold in your hand because of the high levels of conductive properties. It is also prone to scratches.

To combat the fact that it is prone to scratches, the handle has been anodized red. The anodization process not only gives the handle a great color, but it also increases the strength, durability, hardness, and corrosion resistance of the handle.

The handle is designed for grip. The aluminum has been roughly textured and does have two large bumps that add more texture. There is a row of jimping where the handle and the blade meet, as well as curving around the butt of the handle. There are two finger grooves for comfort as well. There is a lanyard hole.

The pocket clip on this knife is an extra-long deep carry pocket clip that is statically designed for tip up carry only on the traditional side of the handle. While this does mean that it isn’t going to be ambidextrous, it also means that the knife is going to look a little bit sleeker. This is because it does not have random drill marks in each side of the knife. Where there are drill marks, there are screws.

The clip is all-black, just like the hardware that keeps it in place as well as the other hardware on the knife. The blade of this exclusive knife is also black.

This is an automatic knife. This knife, as well as the rest of the Kalashnikov auto family, is referred to an auto-conversion knife which means the knife is produced as a folder knife and then converted via third party to offer the automatic function.

The benefits of an automatic knife is that they are easy and quick to bring into play. You can also open the knife with only one hand, because you just have to press the button on the handle.

BladeOps is excited to announce the newest exclusive model to the ever-growing arsenal of Boker Kalashnikov auto knives--the Sub Kalashnikov featuring a sub-2" blade. Quite possibly the perfect evolution of the most popular Boker automatic series ever, the Sub Kalashnikov boasts powerful push button action, a 1.95" blade, and a full-width handle for a rock-solid grip. This exclusive model features a red aluminum handle, all-black hardware, a drop point style blade in a black finish and the extra-long deep carry pocket clip is statically designed for tip up carry only on the traditional side of the handle.

Find this knife and others like it right here.