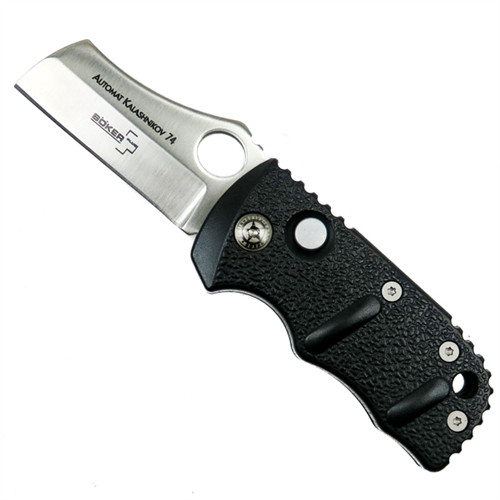 Today we will be discussing the Boker Sub Kalashnikov Cleaver Automatic knife.

The blade has been finished with a satin finish, which is the most common blade finish that you are going to find in today’s cutlery industry. The finish is created when the blade is repeatedly sanded in one direction with an increasingly fine level of a very fine abrasive. The most common material used to create this finish is a fine sandpaper. This process does a few things. The first is that it shows off the bevels of the blade. The second is that it shows of the fine liens of the steel. These two characteristics are going to give the blade a traditional look that cannot be found with any other blade finish.

The blade has been carved into a cleaver shaped blade. This blade is very similar to the kitchen cleaver, which means that this pocket knife is going to excel at cutting, slicing, and chopping. This is because the blades are more solidly built than many of the other pocket knife popular shapes. One of the benefits is that even though this knife can fit in your pocket, you are going to be able to take on almost any task with it.

The handle is made out of a black aluminum. Aluminum itself is a widely popular option for high-quality knife handle materials. Aluminum is tough, durable, incredibly corrosion resistant, and best of all, it is lightweight. However, it is also prone to getting scratched.

The pocket clip on this Boker is extra-long and deep carry. In fact, it extends nearly the entire length of the handle. This means that you will be able to easily go about your day without worrying about whether or not this knife will stay inside of your pocket. The clip has been statically designed for tip up carry only on the traditional side of the handle. This does mean that the knife is not completely ambidextrous friendly. The clip silver, which does match both the blade as well as the hardware on this Boker.

This is an automatic knife, which does mean that it is going to fall under a strict set of laws that the US has surrounding automatic knives. These laws state that an automatic knife is not going to be legal in all states, cities, or areas of the United States. That being said, it is your responsibility as the user to know your local knife laws. BladeOps is not responsible.

This is a push-button automatic, which means that at the push of a button, the blade is going to autonomically deploy. One of the major benefits of an automatic knife is that it is going to be incredibly easy to bring into play. There is not going to be any fumbling while trying to open it—all you have to do is push the button and it will swing open and lock into place, ready for use.

BladeOps is excited to announce the newest exclusive model to the ever-growing arsenal of Boker Kalashnikov auto knives--the Sub Kalashnikov featuring a sub-2" cleaver-style blade. Quite possibly the perfect evolution of the most popular Boker automatic series ever, the Sub Kalashnikov boasts powerful push button action, a 1.95" blade, and a full-width handle for a rock-solid grip. This exclusive model features a black aluminum handle, standard bead blasted hardware, a cleaver style blade in a satin finish and the extra-long deep carry pocket clip is statically designed for tip up carry only on the traditional side of the handle.

You can shop all Boker Kalashnikov automatic knives right here.