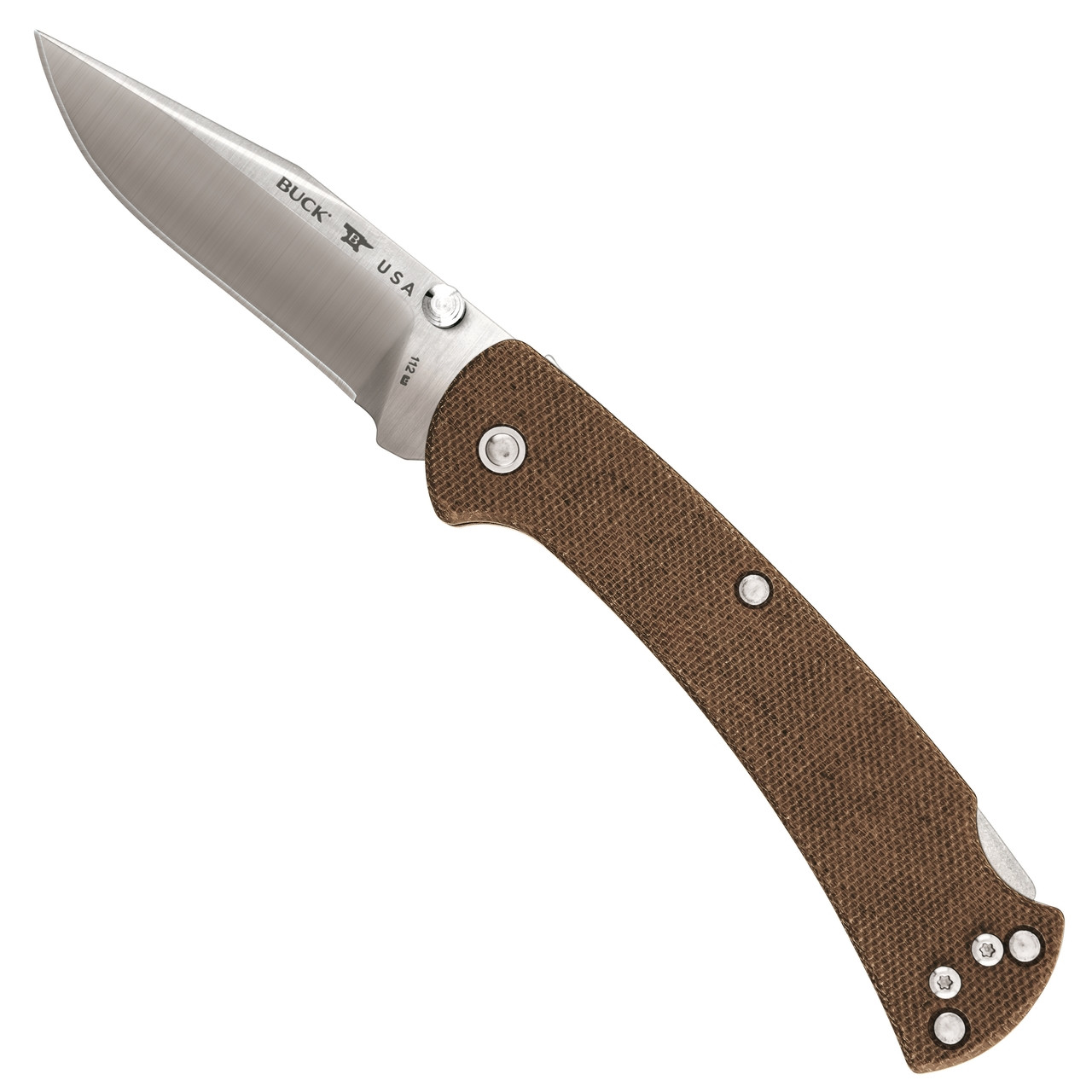 Today we will be discussing the Buck Brown 112 Slim Ranger Pro folding knife, which is currently in stock, but going quickly, so if you like what you read, you will want to hurry over to BladeOps and buy yours right now.

The blade on this Buck has been made out of CPM S30V steel. This is a common steel for higher end knives, because it does have an immense amount of good qualities. This steel is made by Crucible Industries, which is a higher-end steel company, known for making steels particularly for knives. CPM S30V steel was especially made just for higher-end cutlery, so you know that you are getting all of the best qualities that you possibly can from it.

The next major benefit of CPM S30V steel is that it is highly corrosion and stain resistant. This means that it is going to be low-maintenance, which is an ideal characteristic for those outdoor jobs. You will be able to take this steel into the field with you, without worrying about the maintenance and time needed to upkeep this steel. While you should oil it occasionally to keep the steel in the best shape, all you will really need to do in the field is wipe it down and make sure that it is dry before placing it back inside of the handle.

The only major disadvantage to this great steel is that it does prove rather complicated to work with. It is known for being tough to sharpen. In fact, beginner sharpeners will not be able to get a clean and fine edge on this—you are going to need to leave that to some of the more advanced sharpeners.

The blade has been finished with a satin finish, which is a common and traditional finish. In terms of luster, this finish does fall right in the middle of the spectrum. The satin provides a clean silver look that it not going to go out of style. Plus, the satin finish does work to slightly improve the corrosion resistance levels of the blade.

The blade on this has been carved into a clip point blade shape. This is a fantastic all-purpose blade shape that is also one of the most popular blade shapes on the market. The blade’s spine runs straight out from the handle to about halfway up the knife. At this point, it drops pretty low and curves toward the tip. This section looks as if it has been clipped out of the spine of the knife and is rightly referred to as the clip of the blade. Obviously, this is where the blade shape got its name from.

The clip does a couple of things. For starters, it gives the blade a lowered tip. This is going to give you more control over your cuts, which is always needed for a hunting or outdoors knife such as the 112. This is going to help you do precision work without slipping.

The tip is also fine and sharp, which is ideal for piercing. The clip is going to give you a point that excels at piercing, especially with softer targets. This is also one of the only disadvantages of the clip point blade shape. The tip being finer and sharper means that it is going to be more prone to breaking or snapping. This is especially common when used on harder targets. The blade is definitely going to be able to get the job done though, that shouldn’t be a concern of yours.

The clip point blade shape also has a large belly. This is perfect for hunting because it allows you to slice more easily with it. With an outdoors knife such as this one, slicing is going to be a common move. The bigger the belly that you have, the easier it is going to be to slice with, meaning this knife is going to rock.

The handle on the 112 is made out of a canvas micarta. Micarta is a popular type of a phenolic, which is a substance made with the organic compound Phenol, a type of resin. This material is created with thin layers of canvas that are soaked in a phenolic resin. This creates a product that is lightweight, strong, and looks a little nicer than G-10. This material was actually originally introduced as an electrical insulator but was found to be a great option for knife handles. 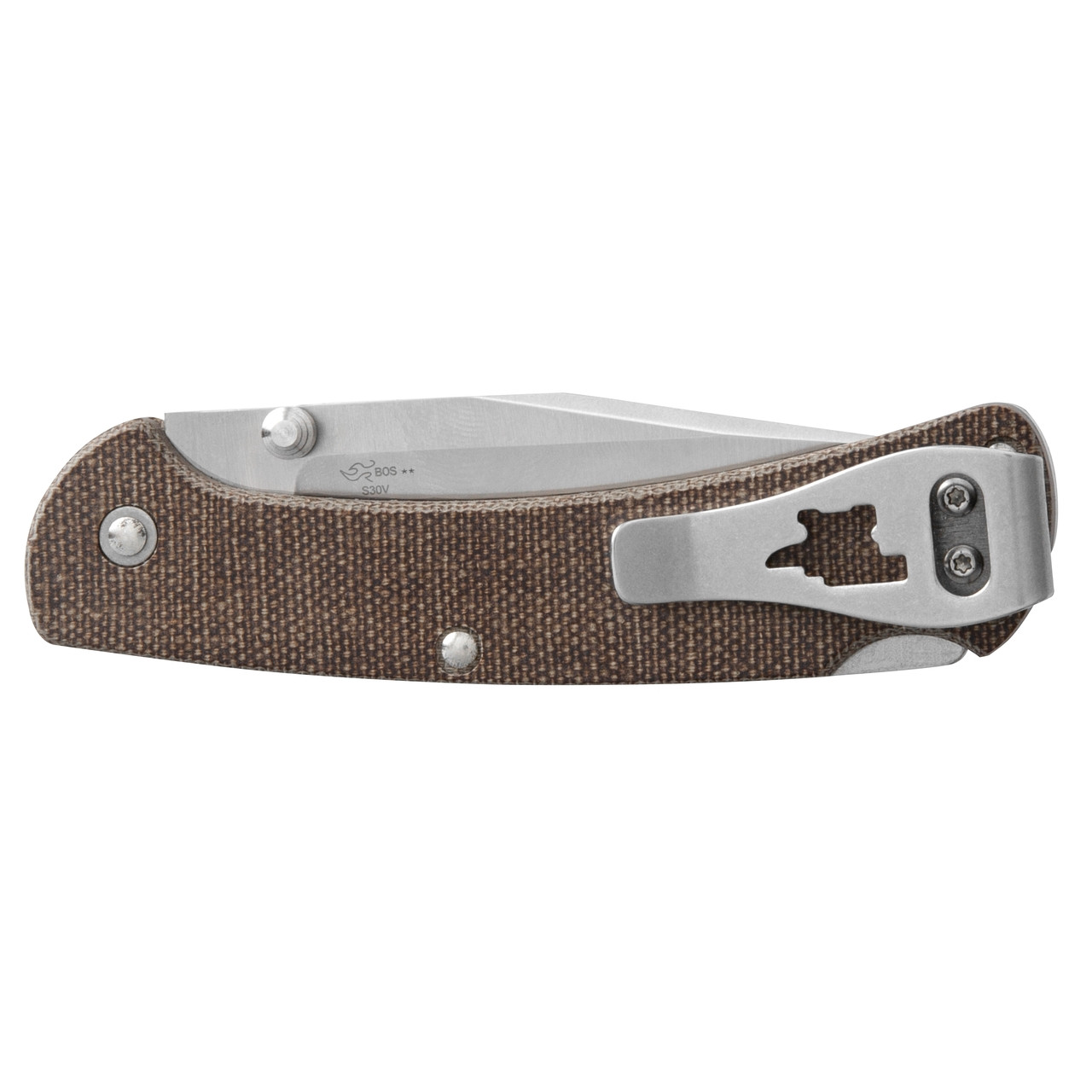 That being said, Micarta does not have any surface texture. It requires a lot of hand labor to produce and then carve some sort of texture into the knife. The more manual labor a material requires, the more expensive it is going to be. This means that Micarta is definitely going to raise the cost of the knife. Some people worry that because the manufacturer carves the texture into the knife that the material is going to be easily scratched. That is not an issue. Micarta is incredibly hard and not easy to scratch, which is why it does cost so much to put the texture in it. The overall pros of this knife material are that it is tough, light, and durable. The overall cons to this knife material are that it is expensive, and it is brittle, just like G-10.

The deep carry pocket clip is designed for tip up carry only, however, it is eligible for either left- or right-hand carry option. This works to make it slightly more ambidextrous friendly, which is an advantage. The clip is unique, featuring a massive top part that bulges out near the edges of the handle. It tapers slightly, but it still much thicker than most clips you would find. The clip is satin, which does match the blade and the rest of the hardware on this Buck. There is a large cutout in the middle of the clip.

This is a folding knife that has been equipped with dual thumb lugs. The thumb lugs are nearly identical to the thumb studs, except they are larger, which does make them easier to access. These are dual thumb lugs, which means that they extend out of both sides of the handle. This allows you to open the blade on either side, which adds to the ambidextrous friendly side of the Buck 112 Slim Ranger Pro. The thumb lugs are easy to use and easy to get the hang of. One of the other big advantages is that you can open this Buck with only a single hand. When the task in front of you requires you to keep at least one hand on it, you will still be able to open and use this knife.

The blade on this fantastic knife measures in at 3 inches long with a handle that measures in at 4.25 inches long. This means that the overall length of the knife is going to come in at 7.25 inches long, which is a pretty standard size for a knife. However, because of the handle material, this is going to be an incredibly lightweight knife, weighing in at only 2.8 ounces. This means that you can easily bring this on any hunting or outdoor trip without being weighed down. Here at BladeOps, we know that sometimes, every single ounce counts, which is why this Buck knife is the ideal option. Also, it was made in the United States of America, so you can be proud to own, carry, and use it. You will also know that you can rely on the quality of this Buck, putting your trust into it for your next outdoors adventure.

The new 112 Series by Buck Knives was manufactured shortly after the 0110 for those that wanted something that was more compact while boasting the same industry-leading materials. The iconic Buck 110 folder first debuted in 1964 and quickly propelled the company into one of the country’s most prominent manufacturers to date--but the recent released of the smaller Buck 112 provides a smaller more-compact version with all the same features. The name and style have always maintained its heritage but over the years we have seen emerging variations in both finish and functionality. This year is the dawn of a new colorful line-up based upon the recently introduced slimmer profile. Each 112 Slim Ranger Pro boasts a classic lockback release, dual-thumb lugs for blade deployment and the handle styling boasts a flared base for proper grip security. This smaller upgraded model features a brown canvas micarta handle, a clip point style blade in a satin finish and the reversible deep carry pocket clip is designed for tip up carry only but is eligible for a left- or right-hand carry option.

This Buck knife is currently in stock at BladeOps, but it is going quickly. If you want to get your hands on one of these fantastic knives, you are going to want to buy yours today. Purchase yours here.