Today we will be discussing the Buck Compadre Froe fixed blade knife. This is currently in stock at BladeOps, but quantities are going quickly.

The blade on this knife is made out of 5160 spring steel. This steel is known for offering the toughness and durability that a knife that is going to take as much blunt force as this one needs.

The blade on the Compadre has been finished with a Cobalt Grey Cerakote coating. This is a polymer coating that is very similar to a paint coating. This coating is surprisingly durable and stays on the handle for much longer periods of time than most coatings do. This means that unlike many coatings, it is going to take more time to scratch off. This coating also creates a blade that is even more corrosion resistant than the blade on its own. This is because of the barrier that the coating creates in between the blade and the environment. Like any coating, it is going to prolong the life of the blade. This is because it increases the wear and corrosion resistance of the blade.

Of course, while it does stay on for longer periods of time than most coatings, it is a coating, which means that it may be scratched off after time or heavy use. At this point, the blade would actually be worse off than if it never had a coating. This is because it adds in the texture of scratches, which make it harder to get some of your smoother cuts. The blade would also be subject to rusting and corroding like it hadn’t previously been. Also, to remain as quality as the blade started off, the coating would have to be reapplied.

One of the other major benefits of the coating is that it is a matte graphite black, which means that it is going to cut down on glares and reflections. This is a good thing if you are using it in the field, because none of the light reflections are going to give away your position in the field.

Even though the blade is coated, it is still important to make sure that the blade has been cleaned and dried before closing it into the handle. This will keep the coating in tip-top shape, without the quality of it breaking down earlier than it should.

The blade has been carved into froe style blade. A typical froe is “a tool for cleaving wood by splitting it along the grain. It is an L-shaped tool, used by hammering one edge of its blade into the end of a piece of wood int eh direction of the grain, then twisting the blade in the wood by rotating the haft” says Wikipedia. The article continues to say, “A froe used the haft as a lever to multiply the force upon the blade, allowing wood to be torn apart with remarkably little force applied to the haft. By twisting one way or the other the direction of the split may be guided.”

The blade on the Compadre has the same shape of blade. However, it is not as L-shaped as you would find on a traditional froe. Instead, it angles slightly at the base of the handle. The rest of the blade is pretty straight, on both the belly and the spine. However, near the top of the blade, both the belly and the spine go outward some, creating a slight bulge. The end of the blade is squared off, with no tip. This blade is not designed to do it all by any means, but when you are looking for force, this Buck will have your back. 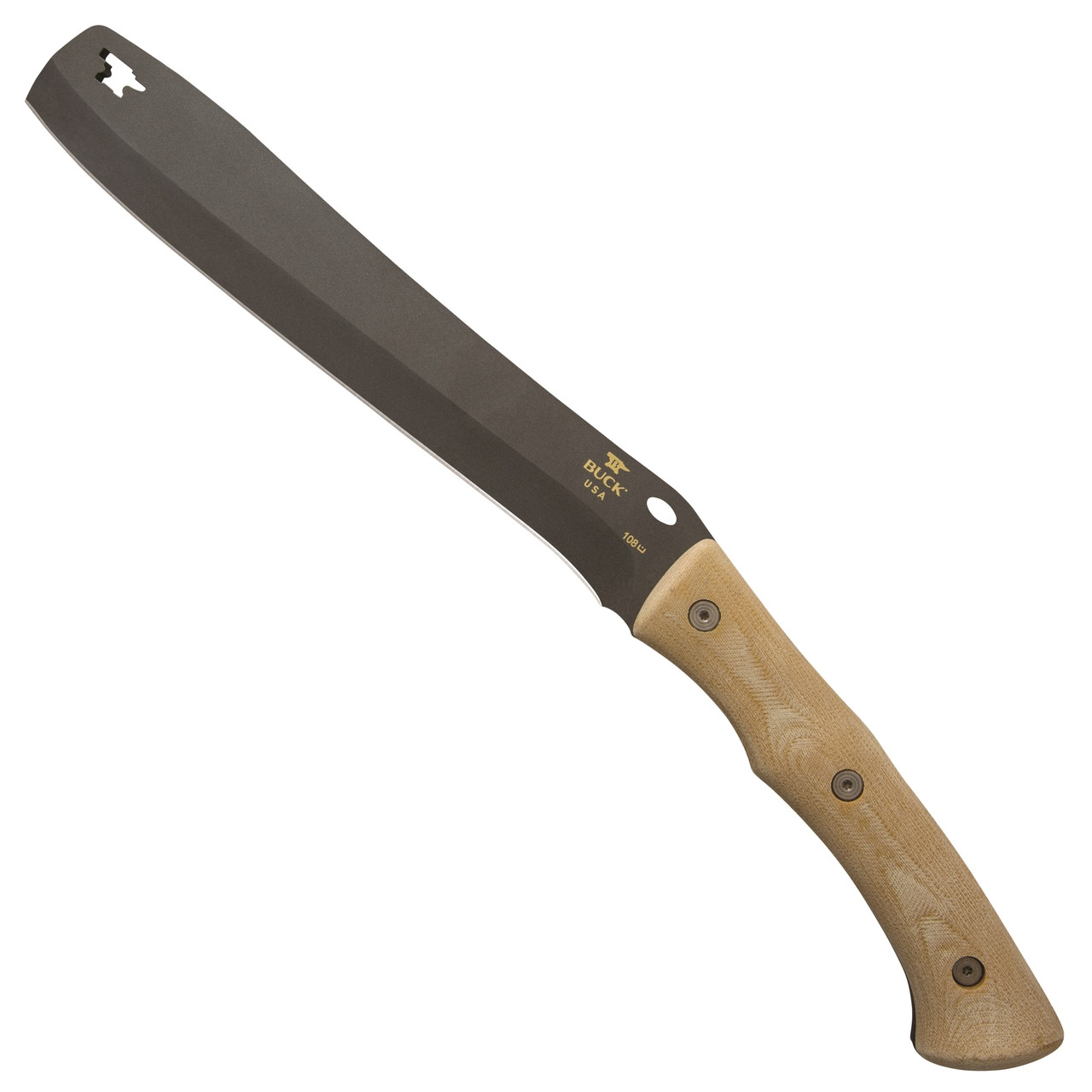 The large handle is made out of a canvas micarta. Micarta is made when the manufacturer soaks layers of canvas in a resin. The interesting thing about micarta is that it gets the strength from the resin, but the appearance is solely the canvas. This means that it has a much better aesthetic than many similar materials such as G-10 or Carbon Fiber.

The product is lightweight, which is crucial to a knife that it as large as this one is. When the entire knife is nearly a foot and a half long, the less weight you have, the better. And you don’t need to worry about the heft that it can provide, because the size on its own will provide that. Micarta is also strong, which is important for a knife like this as well.

That being said, Micarta is not the cheapest material, because it has no surface texture upon creating. This means that a lot of manual time and labor has to go into creating the surface texture that people need. However, once this process has been completed, you are going to have the grip that is needed for nearly any task. With a beast like this one, you can expect to take on some tougher things and a grip is absolutely crucial. The micarta is not going to let you down.

The handle itself is rather simple, which is ideal. The spine is mostly straight from the blade to the butt, but it does have a portion in the middle that comes up slightly. The belly has two extremely elongated finger grooves that will add comfort and allow your hand to better fit while holding this. The butt flares out, which also will help with grip.

This is a fixed blade, which means that there is no mechanism on the knife. The handle and the blade are connected with no hinge. To cover the blade, you put it in a sheath, instead of folding it into the handle.

Some benefits of a fixed blade are that they are easier to care for. This is because the blade is thicker, which means that it is going to be less likely to break. Also, all you have to do is wipe down the blade and handle and it is clean. You don’t have to worry about the innards getting junked up because there isn’t access to the innards. A fixed blade also makes a superior outdoors knife because it can do a lot more than just cut. It is going to be strong enough to be sued as a general utility tool in the field.

The sheath that comes with this Buck knife is made out of leather. Leather is definitely known as one of the more traditional materials that sheaths are made out of. Leather is known to be rugged, tough, and strong. This is not going to break apart the way that plastic does. And, if the stitches happen to come undone, you can easily re-sew them. Leather is also going to provide a custom fit for your Compadre once it has been broken in. Not only that, but it is going to be completely silent. You will be able to pull the Compadre in or out and not have it make a sound. This is idea for those outdoor lovers that don’t want to disturb the wilderness. It is also perfect for hunters who don’t want to scare away their potential game. Lastly, when cared for, leather has an incredible aesthetic. When taken care of correctly, it is only going to look better with age.

Of course, leather is also going to have some disadvantages. The first is that it is not a waterproof material. If it is exposed to water often, it can dry out, which will lead the leather to crack. Leather is also not heat resistant. The same thing is going to happen, the oils can dry out and cause it to crack. Luckily for us, a simple oil occasionally is going to make the leather last longer and age a little better.

With the amount of length that you get with this knife, you can expect an incredibly heavy knife as well. You’re right. It weighs in at 1 pound 7.2 ounces. Yes, this knife is no joke when it comes to the size and weight of it.

This Buck was made in the United States of America, which means that you can feel proud to own it while also knowing that you can rely on the quality of it.

While the Compadre Froe is not a new product, 2019 brings us new color variations that are sure to please the masses. The Compadre Series is designed and engineered with the outdoor enthusiast in mind--now featuring a rugged handle and shock-absorbing spring steel. Each full-tang designed model comes standard with an extra-thick blade and the non-reflective finish throughout allows for scenarios that require a more-tactical nuance. This model features natural canvas micarta handle scales, a froe style blade in a cobalt grey Cerakote® coating and the genuine black leather sheath includes a stainless-steel attachment ring.

Like I earlier mentioned, this Compadre is currently in stock at BladeOps. However, quantities are going quickly, which means you will need to hurry if you want to get your hands on this Buck knife. Purchase it here.