Today we will be discussing one of BladeOps’ newest arrivals, which is the Buck Grey 110 Slim Hunter Select Folder Knife.

The blade on this knife is made out of 420HC High Carbon Stainless Steel. This is a midrange steel that is normally considered the best of the 420 family. The HC in the name stands for High Carbon. This steel is most similar to 420, but does have increased carbon, which is where the name comes from in the first place.

While it is considered a mid-range steel, good manufacturers, especially Buck, can bring out the best with their heat treatments. In fact, Buck is known for the work that they can do with the 420HC to make the edge last longer as well as increasing the resistance to corrosion. This steel is actually one of the most corrosion resistant steels that you are going to find on the market today, even though it costs so little. Often times, you will find it on budget blades, but with what Buck can do with it, this is almost a high-end knife.

The blade has been finished with a stonewashed finish. This is a common blade finish. It is created when the blade has been tumbled around with small pebbles, which are used as an abrasive. This roughs up the steel. After it has been tumbled, it is removed, smoothed out, and polished. This keeps the textured look but gives you a smooth blade for smooth cutting. 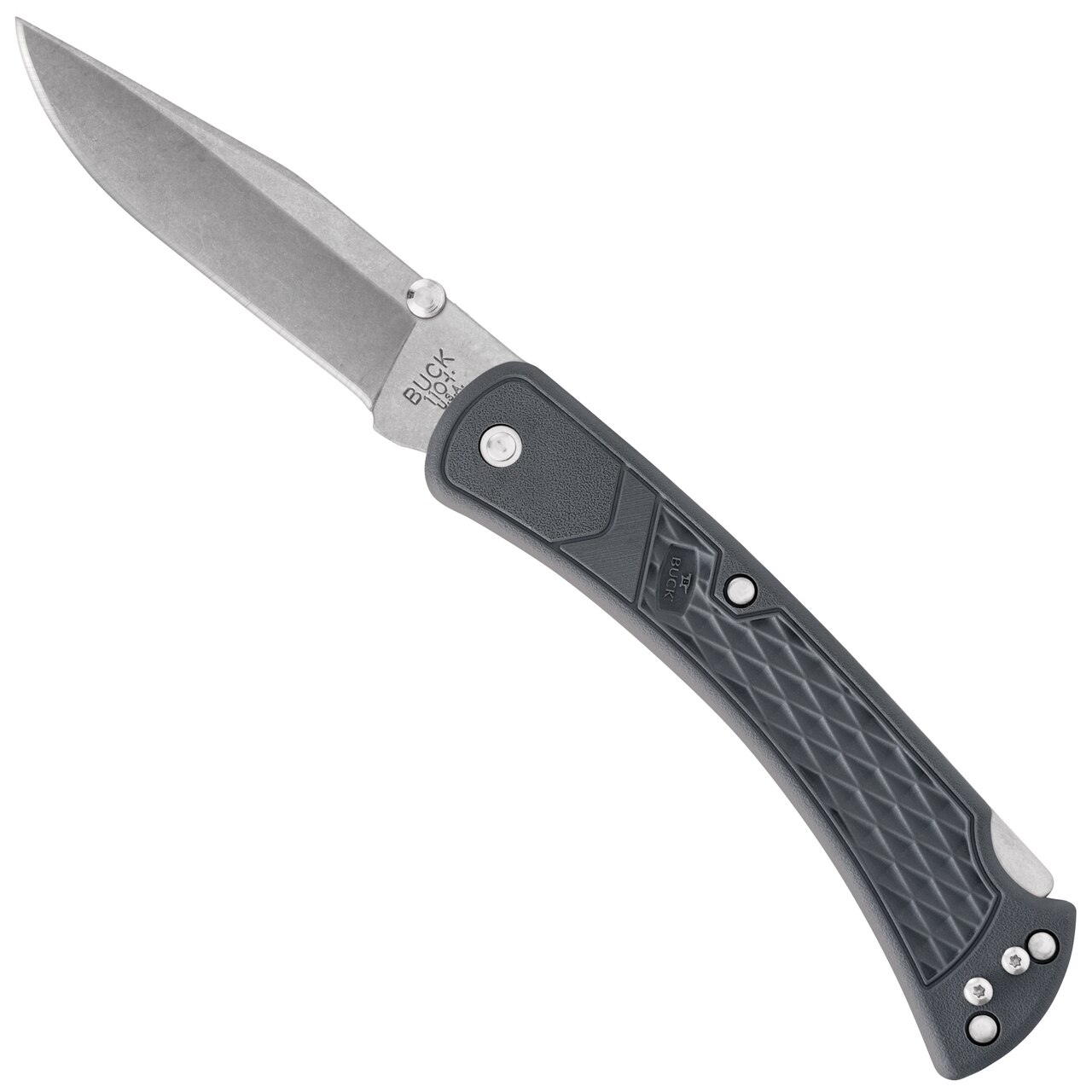 Since the textured look remains, it gives a rugged and well-worn look. This also works to hide the scratches and smudges that accumulate over time, prolonging the original look of the blade. The blade also will have a mattified finish, which helps to cut down on glares and reflections that you would encounter.

All in all, this is a very low-maintenance blade finish. This finish is exceptional for a hunting knife such as this one, because you won’t have to worry about all of the nitty-gritty details of maintenance when you are just trying to enjoy your hunting trip. And, over time, your blade is going to look just as good as when it started.

The blade has been carved into a clip point blade shape. This is a fantastic all-purpose blade shape that is also one of the most popular blade shapes on the market. The blade’s spine runs straight out from the handle to about halfway up the knife. At this point, it drops pretty low and curves toward the tip. This section looks as if it has been clipped out of the spine of the knife and is rightly referred to as the clip of the blade. Obviously, this is where the blade shape got its name from.

The clip does a couple of things. For starters, it gives the blade a lowered tip. This is going to give you more control over your cuts, which is always needed for a hunting or outdoors knife such as the 110. This is going to help you do precision work without slipping.

The tip is also fine and sharp, which is ideal for piercing. The clip is going to give you a point that excels at piercing, especially with softer targets. This is also one of the only disadvantages of the clip point blade shape. The tip being finer and sharper means that it is going to be more prone to breaking or snapping. This is especially common when used on harder targets. The blade is definitely going to be able to get the job done though, that shouldn’t be a concern of yours.

The clip point blade shape also has a large belly. This is perfect for hunting because it allows you to slice more easily with it. With an outdoors knife such as this one, slicing is going to be a common move. The bigger the belly that you have, the easier it is going to be to slice with, meaning this knife is going to rock.

The handle on this is made out of a grey glass-reinforced nylon, or GFN. This material is a thermoplastic material that is known for being cheap, but also nearly indestructible. It is so tough and durable because all of the nylon fibers are arranged haphazardly throughout it. This means that no matter which way the handle is stressed, it is not going to start to break apart. This handle material is similar to G-10, carbon fiber, and even Micarta. However, those material do suffer from being brittle because their fibers are arranged in a single direction.

The GFN has also been textured roughly, which is going to provide enough texture that you don’t have to worry about you hand slipping, even when the circumstances get messy or wet. The texture on the handle is mostly int eh middle of the handle, in a diamond pattern.

The only drawbacks to this handle material are that some people do feel like it has a plastic-y feel to it and they don’t feel that it is as sturdy as other materials would be. GFN also is not going to provide as much texture or grip as G-10 would.

The handle is pretty simple. The spine curves slowly, but evenly from the blade to the butt. The butt is also rounded as well as flared. The flared butt is going to give you slightly better grip on this knife than if it weren’t flared. The belly does not have a finger guard or groove. It simply extends from the blade to the butt in a slow but steady recurve. This handle shape is going to fit well in your hand. It will be comfortable as well as providing you with grip.

The pocket clip is both reversible and deep carry. The clip can only be attached for tip up carry, but it is reversible for either left or right-handed carry options. This does mean that you are going to be able to carry the knife in the way that is most comfortable, thus, safest for you.

The deep carry clip is great because it is going to sit low in your pocket. This will help it stay more securely as well as be better concealed. Since this is a hunting knife, the deep carry clip can be especially important. You’ll be able to be confident throughout your hunting trip that it won’t fall out of your pocket as you are moving around. Leaving you to be able to focus on what matters most.

This is a manual folding knife that has been equipped with a thumb stud. The thumb stud is the most common one-handed opening mechanism that you are going to come cross in the cutlery industry to date. It is what it sounds like: a small stud that sits on the spine of the knife. To open it, use your thumb to push on the stud, which will swing the knife open. This is easy to use and easy to get the hang of. The only drawbacks are that it does put your fingers in the path of the blade when open. Because of this, you just need to be careful as you are opening the knife. There should be no issues if you are paying attention to what you are doing. Also, some people feel that the stud gets in the way when they are trying to use the knife.

The manual folding mechanism means that it is going to be legal in more areas than if it were spring assisted or fully automatic. It does also mean that it is going be easier to maintain, because you don’t have to worry about too many of the internal mechanisms.

The blade on this Buck knife measures in at 3.75 inches long, with a handle that measures in at 4.875 inches long. This means that when the blade is deployed it measures in at an overall length of 8.625 inches long. This is a fairly standard size for a hunting knife, although it may be on the larger side slightly. However, this Buck knife has been made with lightweight materials, so it weighs in at a mere 2.8 ounces. This is definitely on the lighter weight side of the spectrum. The ideal weight for a pocketknife is between 3 and 5 ounces. This does mean that the Slim Hunter is going to fall under that ideal spectrum slightly. But, since it is a hunting knife, the lower weight will be an advantage, since every ounce does count when you’re on a hunting trip. This Buck was proudly made in the United States of America.

This folder model features grey GFN handles, a clip point style blade in a stonewash finish and the reversible pocket clip is designed for tip up carry only.

The iconic Buck 110 folder first debuted in 1964 and quickly propelled the company into one of the country’s most prominent manufacturers to date. The name and style have always maintained its heritage but over the years we have seen emerging variations in both finish and functionality. This year is the dawn of a new colorful line-up based upon the recently introduced slimmer profile. Each 110 Slim Hunter Select boasts a classic lockback release, dual-thumb lugs for blade deployment and the handle styling boasts a flared base for proper grip security.

This knife is currently in stock at BladeOps. Order yours now by clicking here.