Over the decades, Cold Steel has introduced pioneering new materials and designs that have helped to shape the world of the modern knife, edged weapons and tools. From the introduction of the checkered Kraton® handles, and the “Americanized” Tanto blade, to the inclusion of innovative new blade steels like San Mai III® and game-changing locking mechanisms (like our Tri-Ad™ Lock). As we look to the future, Cold Steel continues to bring new levels of strength, safety and performance to the market, providing tried and tested products that you can rely on – Anytime, Anywhere!

Cold Steel is credited with popularizing the American tanto in 1980. Cold Steel marketed knives made for them in the U.S. by Camillus using a carbon steel given the trademarked name "Carbon V". Their imported knives were nearly all made in Seki, Japan using AUS-8 which Cold Steel labelled "400 Series Stainless". They also had two models made in Taiwan, both of which switched to Japan in 2000. In 2007 Camillus New York went bankrupt and Cold Steel was forced to find a new manufacturer for their carbon steel fixed blades. Cold steel first went to Mainland China (People's Republic of China) but allegedly due to quality issues they switched to Taiwan for production. At the same time Cold Steel moved all of their folding knife manufacturing from Seki Japan to Taiwan. The carbon steel was SK5 and stainless was AUS-8 both imported to Taiwan from Japan. However, the Sanmai III models remained strictly Seki production.

Today we will be discussing the Cold Steel AD-10 folding knife, which is a new arrival at BladeOps.

The blade on the AD-10 is made out of CPM-S35VN steel. This steel is made by Crucible Industries, which is a renowned steel manufacturer. This steel was one of their previous steels that had been upgraded.

Crucible originally created S30V steel, which became an incredibly popular steel in the higher end knife industry. This steel was known as having the perfect balance between edge retention, hardness, and toughness, which is a complicated balance to achieve. This steel was also incredibly corrosion resistant, which left it being lower maintenance.

However, there was one major problem with this steel: it was hard to sharpen. Really, really hard. Crucible was not okay with this flaw in the steel and with the second go-around, they were determined to change it.

To create the CPM-S35VN steel, they started with a finer steel structure. They also added trace amounts of Niobium. Both of these new properties assisted in making the steel easier to sharpen. Now, even more beginner of sharpeners could manage it. Plus, the new steel kept all of the same high qualities that CPM-S30V steel had. Really, with how good the original steel was, you cannot go wrong with this newer steel.

This steel has also undergone Crucible’s CPM process, which they describe when they say, “The CPM process produces very homogeneous, high quality steel characterized by superior dimensional stability, grindability, and toughness compared to steels produced by conventional processes.” Essentially, the CPM process enhances all of the good qualities that the steel already has. It is going to be easier to sharpen and more reliable.

The blade has been carved into a drop point blade shape. Like the satin finish, it is hard to go wrong with the drop point blade shape. This is one of the most popular blade shapes on the market because it is known for being versatile and strong. The spine of the knife has a very slight curve that goes down toward the point. This curve creates a lowered point, which is going to give you more control as you work with this knife.

The point is also broad, so you are going to get the characteristic strength from the drop point blade shape. The broad point does mean that this knife is going to be able to stand up to nearly any task that you throw at it, because the tip is not going to snap or break. However, you are going to lose some of your piercing ability because of that same broadness. The other major advantage of a drop point is the large belly creates plenty of surface area for ease of slicing.

The handle on this knife is made out of black G-10. G-10 is a very common man-made material that you are going to 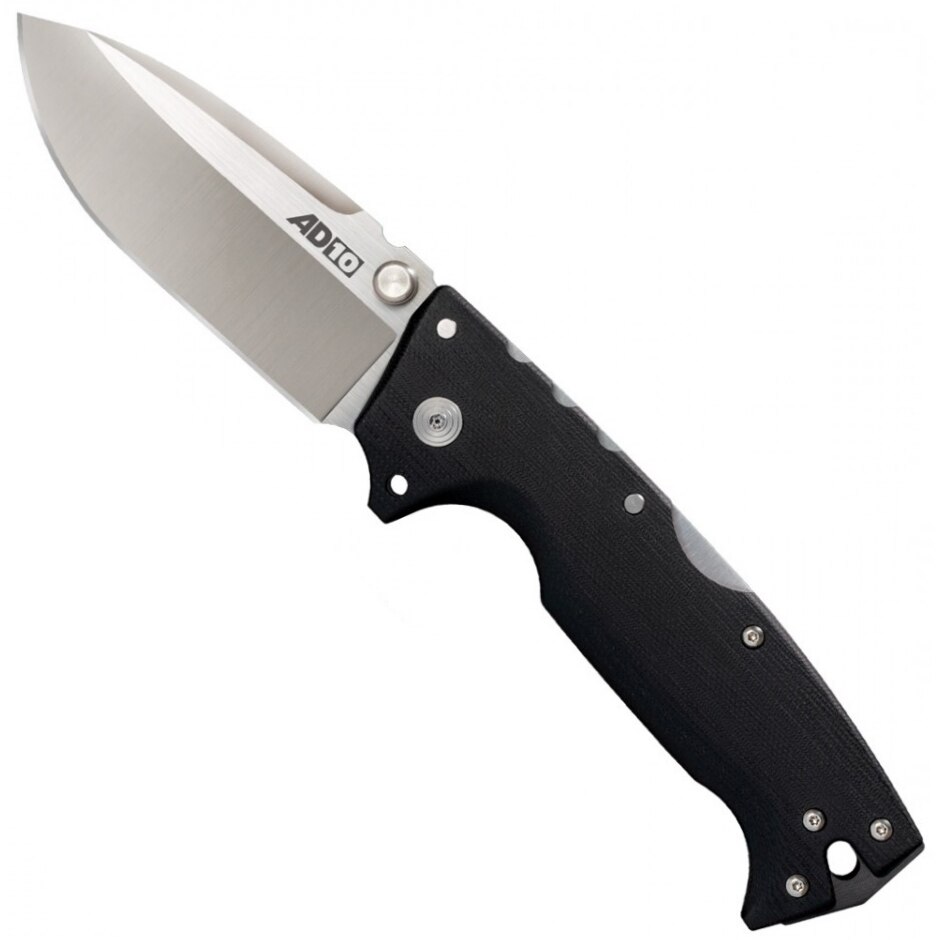 find on knife handles in today’s cutlery industry. This is a type of laminate composite that has been made out of fiberglass. It is similar in properties to the other fiberglass and resin handles such as Micarta, carbon fiber, and GFN. Out of the fiberglass resin laminates, the one that it is most similar to is definitely carbon fiber. Although carbon fiber is one of the more expensive materials and because G-10 is slightly inferior, it becomes a much more inexpensive material. However, it is still not cheaper than GFN, which can be injection molded. This is because G-10 has to be cut and machined into shape, which does add some cost to it.

This material is created when the manufacture takes layers of fiberglass cloth, soaks them in a resin, compresses them, and then bakes them under pressure. The material that this process crates is tough, hard, lightweight, but still strong. Out of all the similar materials, G-10 is known to be the toughest. That being said, it is also a brittle material.

This material is sought after because texture and grip can be added to the handle during the production process. This both keeps the overall cost of the knife down as well as creating a comfortable grip. And it is non-porous, which means that it is not going to absorb any fluids that the knife comes in contact with. It also means that maintenance is going to be a breeze.

This is a manual folding knife. In terms of legality, a manual folding knife is going to be legal in the most states and cities in the United States. Manual knives do not fall under the strict laws that automatic knives do. That being said, always know your local knife laws because you, as the user, are responsible. However, in terms of efficiency, a manual knife is not going to be the most efficient in any terms. To bring this knife into play, you have to remove the knife from your pocket, open it, and then you are ready to go. For an EDC knife like this one though, it should not be that big of a deal to bring it into play. There are few circumstances that the Mini Tuff could handle that would be dire enough to need those few extra seconds.

To assist you in opening the Cold Steel AD-10, the blade has been equipped with a thumb stud, which is the most common one-handed opening mechanism. In fact, it is even one of the most popular overall opening mechanisms that you are going to find on the market. The thumb stud is exactly what it sounds like: a small stud that sits near the spine of the knife near to where the blade comes out f the handle. This stud is accessible when the blade is closed, so all you have to do is push against the thumb stud, which will swing the blade open, where it will lock into place ready for use.

There are a few major benefits to a thumb stud. The first is that is going to allow you to open the knife with just one hand. This is going to be beneficial if you are ever working on a task that requires you to keep one hand on the task. It also just makes it more convenient to open. The next is that it is easy to open and easy to get the hang of. Even someone who has never used a thumb stud should have no issue learning to open this.

The issues of a thumb stud are that some people feel that the stud gets in the way once the blade is opened. Not everyone feels like this is an issue. The other is a little bit more serious: when the blade is swinging open, it does put your fingers in the path of the blade. This means that if you aren’t paying attention, it can lead to accidental slices.

This folder model features a black G-10 handle and a drop point style blade in a satin finish.

The new AD-10 is a high-performance folder with a 4" blade that is a smaller version of Cold Steel's 4-Max. The AD-10 features Cold Steel's patented Tri-Ad® back lock mechanism which uses a new stop pin to redistribute the load of both positive and negative pressures on the lock. With safety at the forefront, this lock was designed by Andrew Demko and has been tested to hold up to 800 pounds of hanging weights.

This knife is currently in stock at BladeOps, but they are being snatched up. Secure yours today by clicking here and order yours now.