Benchmade says, “For more than a half century, Heckler and Koch has been a leading designer and manufacturer of military, law enforcement and civilian firearms. HK’s commitment to quality, innovation, and safety makes them an industry leader in reliability and technology. This dedication continues with HK knives. No Compromise.”

Today, we will be discussing one of the BladeOps EXCLUSIVE knives—the H&L FDE Mini Incursion OTF automatic knife with a tumbled blade.

When Crucible is discussing this steel, they say, “Crucible 154 CM is a heat treatable stainless steel, which offers higher hardness and wear resistance, and enhanced corrosion resistance compared to 440C.” This steel can be compared to 440C, because many of the good qualities are the same. That being said, it is the superior between the two steels because Crucible has added Molybdenum to the mix.

This steel is one of the higher quality steels that you are going to find making a blade. This is an impressive feat, because it is not even a powder steel, it just is a great steel.

154Cm steel is known to have a fantastic balance between toughness, hardness, and corrosion resistance. This is an 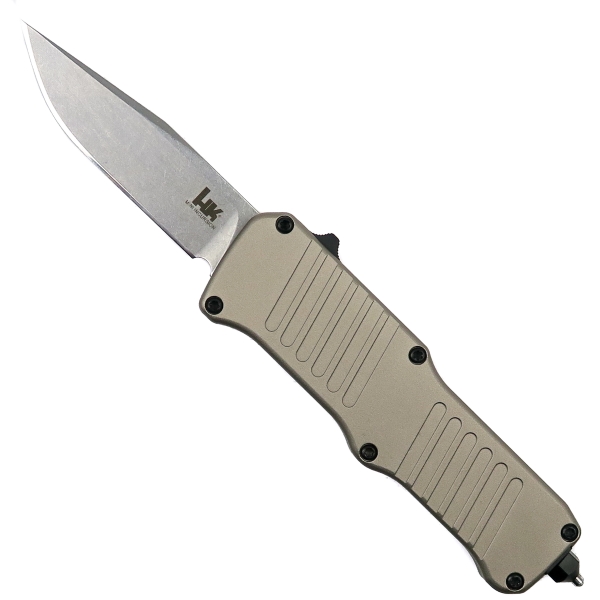 All in all, 154CM steel has many similar qualities to S30V steel, however, it is slightly inferior. This means that it is going to be a cheaper option that still delivers plenty of value.

The blade has been tumbled finish, which is very similar to a stonewashed finish. This finish is created when the blade is tumbled around with an abrasive, normally known to be small ceramic (or other material) stones. This roughs up the steel, adding in a textured appearance to the blade. The steel is then removed, smoothed out, and polished. This means that the steel is going to be smooth, giving you the ability to smoothly cut most things that come your way. That being said, the textured look remains, which does mean that the blade is going to appear more rugged.

The spine of the clip point is unique. It starts out by extending straight out of the handle for about ¼ of the way. At this point, it actually angles downward with a very, very slight swoop. This portion that is angled downward is known as the clip, which is where the blade shape got its name from. It was named this because it looks as if that path of the blade had been clipped out of it.

The clip is not only the namesake of this blade shape, but it also creates a lowered point. The lowered point is where you are going to get the bulk of your control from. This control is going to allow you to perform fine detail work when necessary. The clip also creates a fine and sharp point.

The clip point excels at piercing specifically due to the fine and sharp point. This design cuts down on drag, which allows you to better pierce into small targets. As good as this is, it is also one of the only drawbacks that the clip point does have. This point can act as a drawback because the point is fragile and does have the tendency to break when used on some of the harder targets that you may encounter. This does just mean that you are going to want to be careful when choosing what to pierce with the FDE Mini Incursion.

The last major benefit of the clip point blade shape is that it does have a large and rounded belly. This is going to add plenty of extra surface area, which is going to make slicing a breeze. This is one of the main contributors to how versatile the blade is—when you can slice well with a knife, there is not much that you cannot do.

The handle on this BladeOps’ exclusive knife is made out of 6061-T6 aluminum. Aluminum itself is a widely popular option for high-quality knife handle materials. Aluminum is tough, durable, incredibly corrosion resistant, and best of all, it is lightweight. However, it is also prone to getting scratched.

6061-T6 aluminum is the most common aluminum alloy that is used. This is also because it is the toughest of all the aluminum alloys. It has the highest yield resistance of any. It is going to give you everything that aluminum originally would have and then increase it. With this handle, you are going to have a reliable and solid knife to use.

The handle has been anodized with a flat dark earth color. That is not the only thing that the anodization is going to do though—it is also going to improve all of the other great qualities that aluminum already has. With an anodized surface, the aluminum is going to be stronger, tougher, and more durable. In fact, the aluminum is even going to be less prone to the scratches that it normally is subjected to.

One of the biggest advantages of an anodized handle is that the anodization process literally changes the chemical makeup of the surface of the handle. This means that the color is not going to peel off as if it were coated. While the surface can still be scratched, meaning that the color would come off slightly, it does make it harder to scratch as well.

The handle is asymmetric. The spine goes straight out, before dropping down slightly and extending toward the butt. The butt is completely flat. The belly does have two squared off finger grooves that are going to make the handle slightly more comfortable to hold. There are twelve grooves in the face of the handle that will add texture, and thus grip to this BladeOps’ exclusive knife.

The pocket clip is black and simple. It has been slightly skeletonized with a portion cut out of the middle as well as “HK” stamped through it. The clip tapers very, very slightly. This is not a deep carry clip, but since the handle is so small anyway, the clip should allow the knife to remain securely in your pocket as you go about your day to day tasks. The clip can only be attached on the traditional side of the knife for tip down carry.

This is an automatic knife, which does mean that it is not going to be legal in all states, cities, or areas of the United States. As always, it is your responsibility as the user and purchaser, to know your local knife laws before buying, using, and carrying this knife. BladeOps is not responsible for any consequences.

This is a smaller knife, with the blade measuring in at 2.95 inches long. The handle on this exclusive knife measures in at 4.55 inches long. This creates an overall length of 7.5 inches long when the blade has been deployed. Since this is a smaller knife, you can expect a much lighter weight knife as well. This one weighs in at a mere 3.4 ounces. This is a solid weight, because it is going to allow you to have some of the heft that you require. Never is it going to feel too lightweight in your knife. It will have the amount of heft that you need to feel that you can rely on the FDE Mini Incursion. That being said, the 3.4-ounce knife is in no way going to weigh you down. When this knife is in your pocket, you might even forget that it is there.

As an additional bonus, this knife was made in the United States of America. This does two things—for starters, you can fully trust the quality of this knife. You know that not only can you rely on the materials, but you can rely on the quality of the assembly of the blade as well. No part of this knife is going to let you down. The second thing that it does is allows you to feel proud of owning a knife that helped bring a fellow American a job. There are many reasons why you should feel proud to own, carry, and use the FDE Mini Incursion, and the fact that it is made in the USA is only one of them.

This exclusive out-the-front model features a flat dark earth anodized handle and a clip point style blade in a tumbled finish. The newly released Mini Incursion double-action OTF (Out the Front) automatic knife is a sub-3" blade that boasts quick speed, a solid lock-up and a design that is practical while remaining portable. Its stout frame works even with the use of the gloves and the incorporation of the carbide glass breaker is ideal for those critical emergency situations.

This H&K is in stock currently at BladeOps. Hurry over to get yours today. Shop for this knife as well as other BladeOps’ exclusive knives here.