"For more than a half century, Heckler and Koch has been a leading designer and manufacturer of military, law enforcement and civilian firearms. HK’s commitment to quality, innovation, and safety makes them an industry leader in reliability and technology. This dedication continues with HK knives. No Compromise.”

When Crucible is discussing this steel, they say, “Crucible 154 CM is a heat treatable stainless steel, which offers higher hardness and wear resistance, and enhanced corrosion resistance compared to 440C.” This steel can be compared to 440C, because many of the good qualities are the same. That being said, it is the superior between the two steels because Crucible has added Molybdenum to the mix.

This steel is one of the higher quality steels that you are going to find making a blade. This is an impressive feat, because it is not even a powder steel, it just is a great steel.

154Cm steel is known to have a fantastic balance between toughness, hardness, and corrosion resistance. This is an impressive balance to achieve, because often times, the harder the steel is, the less tough it is. That also goes in reverse, meaning the tougher the steel is, the less hard it is. Corrosion resistance is the cherry on top of it all, creating a steel that nearly cannot be beat.

All in all, 154CM steel has many similar qualities to S30V steel, however, it is slightly inferior. This means that it is going to be a cheaper option that still delivers plenty of value. 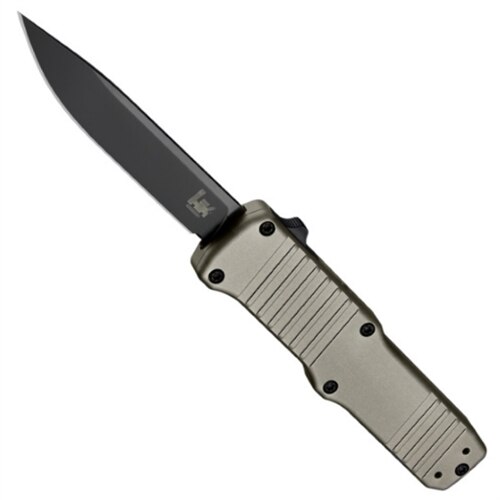 The coating is also going to prolong the life of this blade, as it creates a layer in between the forces of nature and the steel. The coating’s barrier will work to increase the wear and corrosion resistance of the blade. The next major benefit to a quality coating such as this one, is that it cuts down on any texture on the blade. This means that you will be able to use this for smoother and quicker cuts and pierces.

Of course, you do need to keep in mind that a coating can and will scratch off after time or heavy use. At this point, the benefits of the coating will be eliminated. In fact, a coated blade that has its coating wearing off is almost worse than having a blade that had never been coated in the first place.

The spine of the clip point is unique. It starts out by extending straight out of the handle for about ¾ of the way. At this point, it actually angles downward sharply. This portion that is angled downward is known as the clip, which is where the blade shape got its name from. It was named this because it looks as if that path of the blade had been clipped out of it.

The clip is not only the namesake of this blade shape, but it also creates a lowered point. The lowered point is where you are going to get the bulk of your control from. This control is going to allow you to perform fine detail work when necessary. The clip also creates a fine and sharp point.

The clip point excels at piercing specifically due to the fine and sharp point. This design cuts down on drag, which allows you to better pierce into small targets. As good as this is, it is also one of the only drawbacks that the clip point does have. This point can act as a drawback because the point is fragile and does have the tendency to break when used on some of the harder targets that you may encounter. This does just mean that you are going to want to be careful when choosing what to pierce with the Hadron.

The last major benefit of the clip point blade shape is that it does have a large and rounded belly. This is going to add plenty of extra surface area, which is going to make slicing a breeze. This is one of the main contributors to how versatile the blade is—when you can slice well with a knife, there is not much that you cannot do.

The handle on this knife is made out of 6061-T6 aluminum that has been anodized with a flat dark earth color. Aluminum itself is a widely popular option for high-quality knife handle materials. Aluminum is tough, durable, incredibly corrosion resistant, and best of all, it is lightweight. However, it is also prone to getting scratched.

6061-T6 aluminum is the most common aluminum alloy that is used. This is also because it is the toughest of all the aluminum alloys. It has the highest yield resistance of any. It is going to give you everything that aluminum originally would have and then increase it. With this handle, you are going to have a reliable and solid knife to use.

The handle has been anodized with a flat dark earth color. That is not the only thing that the anodization is going to do though—it is also going to improve all of the other great qualities that aluminum already has. With an anodized surface, the aluminum is going to be stronger, tougher, and more durable. In fact, the aluminum is even going to be less prone to the scratches that it normally is subjected to.

One of the biggest advantages of an anodized handle is that the anodization process literally changes the chemical makeup of the surface of the handle. This means that the color is not going to peel off as if it were coated. While the surface can still be scratched, meaning that the color would come off slightly, it does make it harder to scratch as well.

The pocket clip on this OTF is designed for either left or right handed carry, only tip down. This means that this H&K is going to be ambidextrous, as you can carry it in the way that is most comfortable for you. Plus, tip down carry is the safer way to carry a knife, in case it accidentally deploys inside of your pocket.

This is an automatic knife, which does mean that it is not going to be legal in all states, cities, or areas of the United States. As always, it is your responsibility as the user and purchaser, to know your local knife laws before buying, using, and carrying this knife. BladeOps is not responsible for any consequences. The benefits of having it be automatic is that you will be able to bring it into play much quicker than a manual.

This is an Out-the-Front knife, which means that the blade is deployed through a hole in the top of the handle. This contrasts from the typical folding knife, where the blade comes out of the side of the handle. The trigger to deploy the blade is black, which does math the bulk of the hardware on this knife. It is slightly more triangular than a typical trigger. It is slightly stepped, which will give you a bit better of a hold on it, while you are attempting to deploy the blade.

The blade on this knife measures in at 3.375 inches long with a handle that measures in at 4.625 inches long. This means that it measures in at an overall length of 8 inches long when the blade has been deployed. This knife weighs in at 3 ounces, which is an ideal weight for an EDC knife. The perfect range of weight is between 3 and 5 ounces. The three ounces will give enough weight that you can feel confident that this knife is going to provide you with the needed weight to rely on this when you need it most. This weight is also going to ensure that you are not weighed down; it will be easy to have with you at all times. The last great aspect of this H&K knife is that it is made in the United States of America. This means that you can easily rely on the quality of the knife and feel proud to own, carry, and use it.

For over 50 years, Heckler & Koch has been a front-runner in the design and manufacturing of firearms for law enforcement, military and civilian populations on a global scale. It comes as no surprise that the same commitment to excellence and technological leadership had bled over into the ever-growing knife industry. The Hadron is a classic double-action out the front automatic knife that boasts quick speed, a solid lock-up and a design that is practical while remaining portable. Offered up in both different blade styles and colors, this specific model features flat dark earth anodized aircraft-grade aluminum handle scales, a clip point style blade in a black finish and the reversible pocket clip is designed for a left- or right-hand carry option.

You can shop all H&K brand knives here.