Hogue explains their knife line by saying, “Hogue’s line of fine sporting cutlery represents the ultimate value in tactical folding and fixed blade knives: the vision of renowned custom knife maker Allen Elishewitz expressed through Hogue’s state-of-the-art manufacturing processes. Made in America by American craftsmen, a Hogue knife at your side is a trusted – and trustworthy – companion, an heirloom quality blade combining the best of old-world craftsmanship and design set in the context of modern-day, real-world applications for a tactical blade.”

Today we will be discussing a special version of the EX-A01, the Vietnam Tiger Stripe, which is Exclusive to BladeOps.

The Hogue Knives EX-A01 has been made in collaboration with Allen Elishewitz. His bio on elishewitzknives.com tells a little history of who he is and how he became interested in knives. He has been interested in knives since he was incredibly young and has also been practicing different forms of martial arts for over 3 decades. He combined these two interests to create both defense and utility knives. He started making knives while he was in college, and once graduated, decided to become a full-time knifemaker. In 1994, he became a member of the American Knifemakers Guild, and at the time, he was the youngest Guild Member. His knives have won various awards, including “Best Utility Knife” and “Best High-tech Knife.” With his background, we know that any knife he has collaborated on will be one that we can rely on. We also know that it will be one designed with a hint of elegance.

154CM steel is a hard steel that is commonly known as an upgraded version of 440C, because Crucible chose to add in Molybdenum. It is this addition that gives the blade the superior edge holding, especially compared to 440C. The Molybdenum also allows the steel to have the same high levels of corrosion resistance even though there is less Chromium in the steel.

This steel is tough enough that it will allow you to get the job done. Especially with a tanto blade shape. It is not going to be tricky to sharpen if you have the right equipment and will hold an edge for a decent period of time. This is a higher-end steel that is perfect for a higher-end knife like this Hogue knife.

The blade has been finished with a tumbled finish, which is incredibly similar to the stonewashed finish. It is created when the blade has been tumbled around with small pebbles, which are used as an abrasive. This roughs up the steel. After it has been tumbled, it is removed, smoothed out, and polished. This keeps the textured look but gives you a smooth blade for smooth cutting.

The spine of the blade curves down slightly until it reaches about halfway up the spine. At this point, it angles down a little bit more sharply. This section is referred to as the clip, which is where the blade shape got its name from. The clip got its name because it looks as if it has been clipped out of the spine of the knife. Not only is the clip the namesake of the knife, but it also has created a lowered tip. This lowered tip means that you are going to have more control over the cuts while you are working with this knife.

The clip also creates a fine and sharp tip, which is why it does excel at piercing. There is going to be less drag with the insertion and removal of the blade in any soft target, which will make it quick and dangerous. However, the fine and sharp tip is actually one of the drawbacks to the blade shape as well. This does create a tip that is going to be a little bit weaker than a broader tip. It may be prone to breaking if subjected to hard or sharp impacts. That being said, as long as you are relatively careful with it, you should have no major problems.

The next big advantage of the clip point is that it does have a large belly. This large belly gives you more surface area to use while slicing, which is going to make slicing a breeze. Really, you will be able to slice nearly anything with this blade shape.

To create G10, the manufacturer takes layers of fiberglass cloth and soaks them in a resin, then compresses them, and bakes them under pressure. The material that they end up with is very tough, very hard, very lightweight, and still very strong. Out of all the fiberglass resin laminates, G10 is considered the strongest. It is even stronger than Micarta, 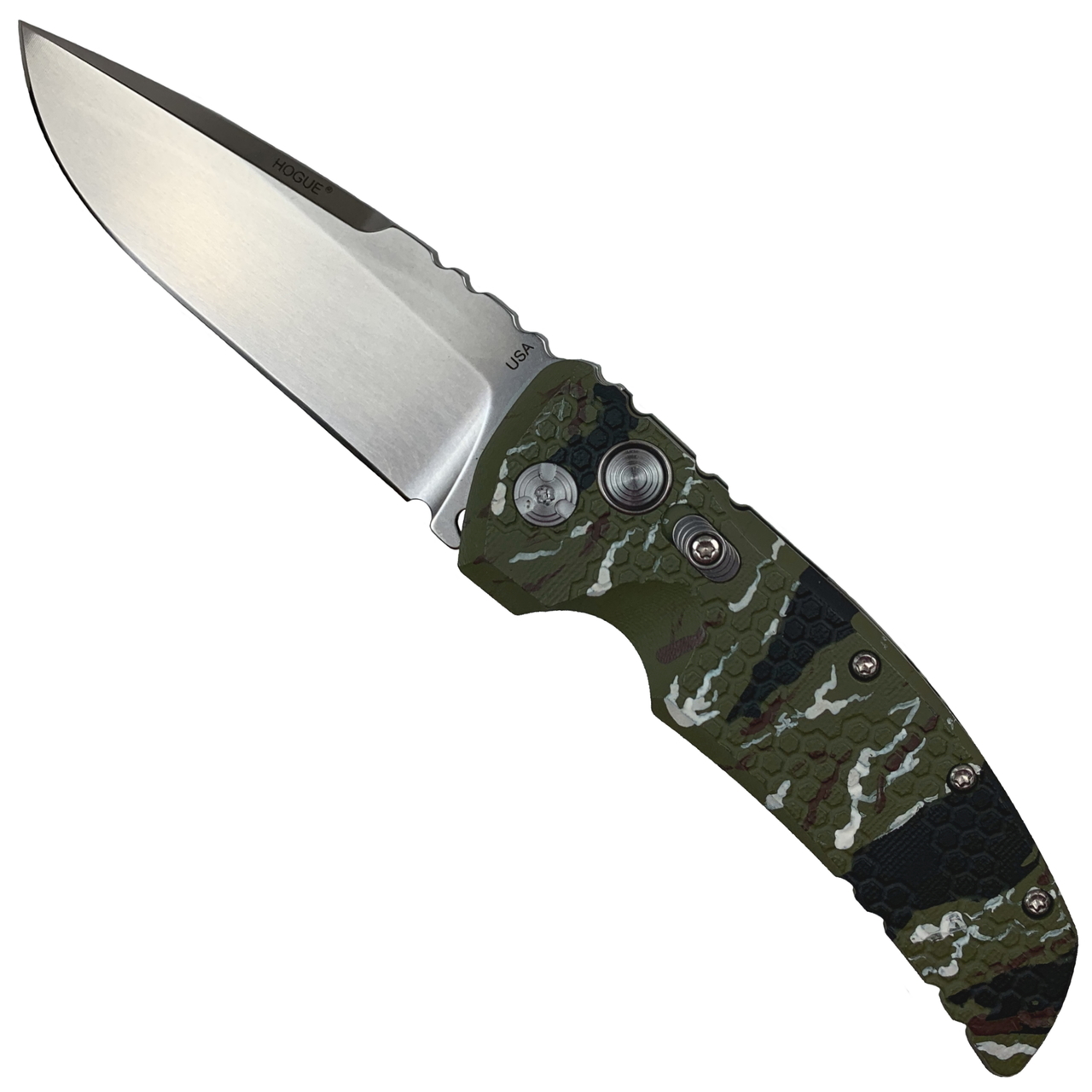 although it is going to be more brittle than Micarta.

Texture can easily be added to the handle, which is going to give you a solid grip. Tactical folders benefit from G10 highly because G10 is durable, lightweight, and non-porous. All of these characteristics help to keep the maintenance time down on this knife.

To create this exclusive knife, BladeOps has teamed up with Hogue Knives as well as Utah’s premier and most experienced firearm customization shop, Joe Firearms. This knife has received a custom 360-degree Cerakote job. The Cerakote coating does provide a plethora of things. For starters, it does increase the corrosion, wear, and chemical resistance of the handle. It also increases the strength and hardness, which is going to make this G-10 handle even more durable.

Most importantly though, it has been applied in a Vietnam Tiger Stripe pattern. This is a tiger stripe pattern made out of greens, browns, blacks, and whites. You aren’t going to find this pattern on any other knife, so if it’s something you like, order yours today.

The handle is pretty simple. The spine has a row of jimping near the top, which then extends onto the actual blade. This is to give you more control when you are cutting, especially when you are doing fine detail work. The belly also has a row of jimping, this one is near the butt. This is to give you more texture, which will lead to a better grip while working with this knife. There is a small finger groove, which does enhance the ergonomics of the handle, making it more comfortable to use. This handle does not sport a lanyard hole.

The pocket clip is not a deep carry clip, but it is reversible. It can only be attached on the traditional side, but you can reverse it for either tip up or tip down carry. It is kept in place by three silver screws which do match the rest of the hardware on the knife. The clip itself is also a deeper silver.

The Hogue Exclusive EX-A01 is an automatic knife, which does mean that it is going to fall under a strict set of laws in the United States. Automatic knives are not legal in all states, cities, or areas in our country, which does mean that this knife may not be an option for you to have. As the purchaser and user, it is your responsibility to know and follow your local knife laws. BladeOps is not responsible for any consequences of broken laws.

The only other major disadvantage to owning an automatic knife is that it is going to be a little bit harder to maintain. There are a lot of moving parts on the inside of the handle of an automatic knife such as this one. This means that if one of the pieces breaks, the opening function may not perform as smoothly or efficiently. This does mean that you are going to need to be very precise with your cleaning.

That being said, there are a wide variety of advantages to owning an automatic knife. The first is the most obvious: it is going to be easy to bring into play. There should be no fumbling with the knife trying to open it when you need it most: all you have to do is press the button on the handle and it will swing open, lock into place, and be ready to use. This is an advantage if you are ever using the BladeOps Exclusive Hogue Knife for self-defense. When every single second counts, you do not want to be fumbling with it, trying to open it. You should be able to immediately use the knife that you are relying on. The push button is oversized so that you do not have to fumble as much while trying to find it. The button will have easy access.

This is also an advantage if you are working on a task that requires you to only use one hand to open the knife. There should be no problem with this, because again, all you are doing is pressing a button.

BladeOps has teamed up with Hogue Knives and Utah's premier and most experienced firearm customization shop, Joe Firearms, to debut an extremely limited customized run of 3 different Hogue automatics sporting never-before-seen colorways that will be sure to please knife and gun enthusiasts alike. All knives receive a custom 360° Cerakote™ job (a $75+ value!) that will not only enhance the overall look, but provide increased wear, corrosion and chemical resistance all while increasing impact strength and hardness--and no two are alike!

The EX-A01 was produced in conjunction with famous knife designed Allen Elishewitz and was created in a push-button automatic version after the popularity of the original manual folder. Each model comes complete with a high flat-ground stainless steel blade as well as an over-sized push button and front-mounted slide safety.

This BladeOps’ Exclusive knife is still in stock, but we know that it is going to be a favorite. To secure yours today, click here.