In 1994, just a year after the first prototypes were created in Anthony and Susan Marfione’s apartment, the release of the UDT marked the official beginning of Microtech. The company began renting a building in Vero Beach, Florida, which quickly expanded to nearby empty buildings as the demand for a larger facility became apparent. Since then, Microtech has carved itself a place in history by building a long-standing tradition of innovation and quality that leaves an impression on its customers.

Today we will be going over the Marfione Custom Knives Custom Dirac Delta Dagger OTF automatic knife, which is a new arrival at BladeOps.

The blade on the Dirac is made out of CTS 204P stainless steel. This steel can reasonably be compared to Bohler-Uddeholm’s M390 steel. However, it does have a little bit more tungsten than the other steel. This steel is known for having an incredibly high wear and corrosion resistance. Part of this is due to the fact that it does have a fine-grained alloy, which also means that this is a good choice for high end folding knives, such as the Dirac, as well as some fixed blades.

The blade on this custom knife has been finished with a mirror polished finish. This type of finish is done completely by hand, to ensure the absolute best quality that can be achieved. The metal is polished repeatedly until the blade has a highly reflective surface on it.

Not only does the mirror finish look great and high-end, it also provides the blade with increased corrosion resistance. This is because the blade is smooth enough that there are no ridges where the blade may begin to rust or corrode.

However, this is a blade finish that is most commonly found on collectors’ knives. That is because the mirror finish involves a lot of polishing to maintain its look as well as its reflective quality. If you were to use this knife in a tactical setting or even day to day, the marks would begin to show.

Really, this finish is there to be more of a presentation finish than a utility finish. The finish elevates the look of the blade and the look of the overall knife, as it is not one that you often see. That begin said, the hand labor that this finish requires is going to increase the cost of the overall knife considerably. Again, this is more of a collector’s knife, so that added cost shouldn’t be surprising. 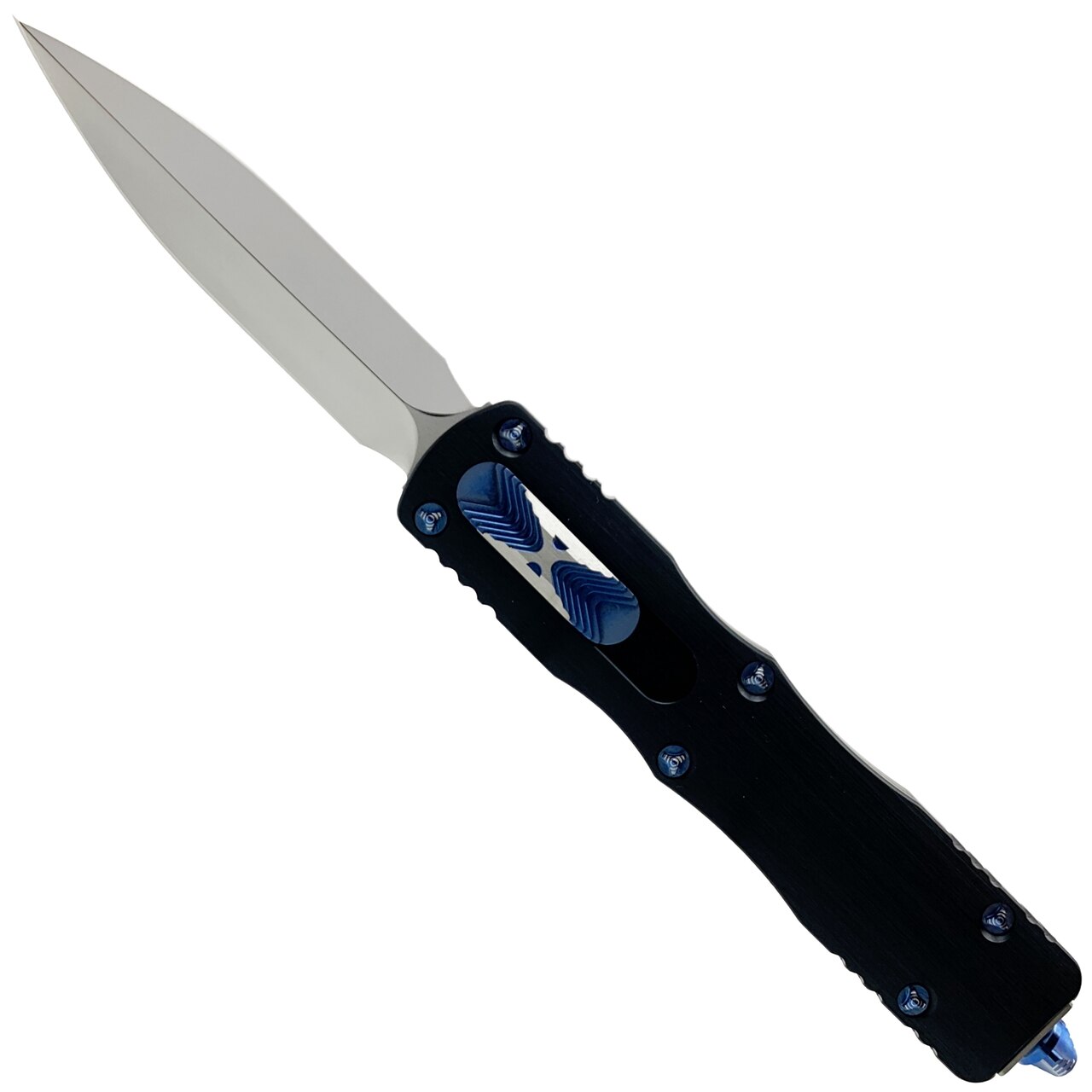 The blade has been carved into a dagger style point. The dagger style blade has been created to have a point. It is known for its tip. The main purpose that the dagger blade is used for is piercing. The blade shape itself is symmetrical, which creates a fine and sharp point perfect for stabbing into softer targets. Plus, because of how the profile of the knife is let in on both sides, it creates a perfect shape for close combat situations.

This blade shape does have a few disadvantages. The first is that it does not have a belly, so it is not going to be a good all-purpose blade shape. Also, the tip is very thing and sharp, which means that it may have the tendency to snap when used on harder targets. Again though, this is more of a presentation knife that anything else, so you shouldn’t be too concerned about the tip actually breaking.

Both of the sharpened edges on this Custom Dirac Delta have been sharpened into a plain edge. The biggest thing that the plain edge adds to this knife is elegance. The plain edge pairs perfectly with the mirror finish look smooth, sharp, and classy.

If we are speaking of utilitarian benefits, the plain edge is the easier edge style to sharpen, due to the lack of serrations. The plain edge is also going to equip this knife to have smoother, cleaner cuts. It will be equipped to take on a wider variety of tasks, as it excels at push cuts. Push cuts are going to be the most common style of cutting or slicing that you do with this knife, as it includes shaving, skinning, and standard slicing.

The handle on this Marfione Custom Knife is made out of a hefted anodized aircraft alloy handle. Alloy is durable and lightweight, while also being inexpensive. Also, alloy is incredibly corrosion resistant, so it is a rather low maintenance handle.

There are a couple of disadvantages to an alloy handle though. First, it is going to feel incredibly cold in your hand if you lie in a colder environment. Because off this, if you know that you are mostly going to be using your knife in a colder environment, this might not be the one for you. Also, it does not offer as much texture as other ones, meaning you won’t have as secure of a grip. The last thing that is a disadvantage about alloy is that it is going to be prone to scratches.

All in all, alloy is a quality material for a quality knife. It is going to be durable and low maintenance.

To further increase the good qualities of the alloy, it has been anodized black. Anodizing is an electrolytic passivation process used to increase the thickness of the natural oxide layer on the surface of metal parts. This process is called anodizing because the part to be treated forms the anode electrode of an electrical circuit. The anodization process increases the materials resistance to corrosion and wear.

Really, anodization increases all of the good aspects of the alloy handle that it already sports, such as the fore mentioned resistance to corrosion and wear. It also is going to cut down on glares and reflections, because it does add the black color to it. Not only that, but it is going to prolong the life of the handle, through the barrier that it creates. Lastly, it chemically changes the surface of the handle, so the black color is not going to peel off like a coating would. That being said, the anodization color can be scratched off, since the top layer can be scratched off. This is harder to do though and would need to take a heavy beating for that to happen.

The other great aspect of the anodized handle is that it is going to increase the weaknesses of the alloy. For example, alloy is relatively easy to scratch. But once it has been anodized, it is much harder, and won’t have that same issue.

The handle is pretty simple for an OTF knife. It is mostly rectangular, although there are four different spots of jimping that span lie on both the belly and the spine of the handle near the blade and near the butt. These spots of jimping are there to help you have a more secure and solid grip when you are trying to use this knife. There is nothing worse than feeling like you are out of control when you are using a tool and these jimping spots will help guarantee that you don’t feel like that.

In the middle of the handle, on both the spine and the belly, there are two section that curve in slightly. This is going to help make your grip slightly more comfortable. Aluminum is actually known for being a comfortable material to hold onto and these divots will only help with that. The butt of the handle is slightly rounded. There is no lanyard hole on this knife.

The pocket clip is a bright silver, while the rest of the hardware on the knife is a bright blue. The pocket clip can only be attached for tip down carry, but that is the safest way to carry a knife, so it isn’t a drawback. On the pocket clip, MCK’s logo has been etched into it, as well as the date of production. Along with the knife, you will get a certificate of authenticity.

This knife is an Out-the-Front, or OTF knife. This means that instead of the blade being deployed from out of the side, like the majority of folding knives do, it instead comes out of a hole in the front of the knife.

The significant difference between the Dirac and the rest of Microtech’s OTF’s is that the switch for deploying the blade is actually right smack on the front of the handle, instead on the side. This is something that Microtech has never done before. The switch has been texturized with steps, so that you are never fumbling or slipping with it. It will be easy to use.

This is a dual-action OTF, which means that you are going to deploy and retract the blade with the same switch. Also, this is an automatic knife, which means that it is not going to be legal in all states, cities, or areas of the USA. You, as the purchaser and user, are responsible for knowing your local knife laws. BladeOps is not responsible for any consequences of this broken rule. However, it also means that it is going to be easy and quicker to bring into play than a manual folding knife.

The blade on this knife measures in at 3.81 inches long with a handle that measures in at 5.69 inches long. This means that when the blade has been deployed, the overall length of the knife will measure in at 9.5 inches long. This is considerably longer than your standard knife. Usually the biggest drawback to a longer knife is going to be the extra size and weight which take away from it being a good EDC. However, MCK has not been designed to be an EDC, so the extra length is just going to add to the fantastic appearance that this knife sports. The Custom Dirac Delta weighs in at 5.3 ounces, which is to be expected with the durable materials used and the size of the knife. This MCK, like all MCKs, was proudly made in the United States of America.

Marfione Custom Knives (MCK) are well known for their high-end custom knives and products that feature exotic materials that turn mere tools into works of art. Highlights of this knife include ringed blue titanium hardware, a spike grind blade profile and is lasered with the Marfione dagger logo. Package comes complete with a presentation box, zipper pouch as well as a certificate of authenticity.

This new arrival is currently in stock at BladeOps. To ensure that you get your hands on one of these sweet knives, click here and order yours today.