In 1994, just a year after the first prototypes were created in Anthony and Susan Marfione’s apartment, the release of the UDT marked the official beginning of Microtech. The company began renting a building in Vero Beach, Florida, which quickly expanded to nearby empty buildings as the demand for a larger facility became apparent. Since then, Microtech has carved itself a place in history by building a long-standing tradition of innovation and quality that leaves an impression on its customers.

Today we will be going over the Marfione Custom Ultratech dagger, which is an automatic OTF knife. This knife is in stock at BladeOps right now.

The blade on this knife is made out of Damascus. The name itself on this steel dates back to medieval cultures. The name does refer to a craftsmanship style that comes out of India. This was round 300 B.C. which was a time when craftsmanship was large. This steel name was most likely named for the region where it comes out of, in Syria. Damascus was originally used for swords. These swords were known to be tough, almost resistant to shattering, and even capable of getting a very fine edge on it. 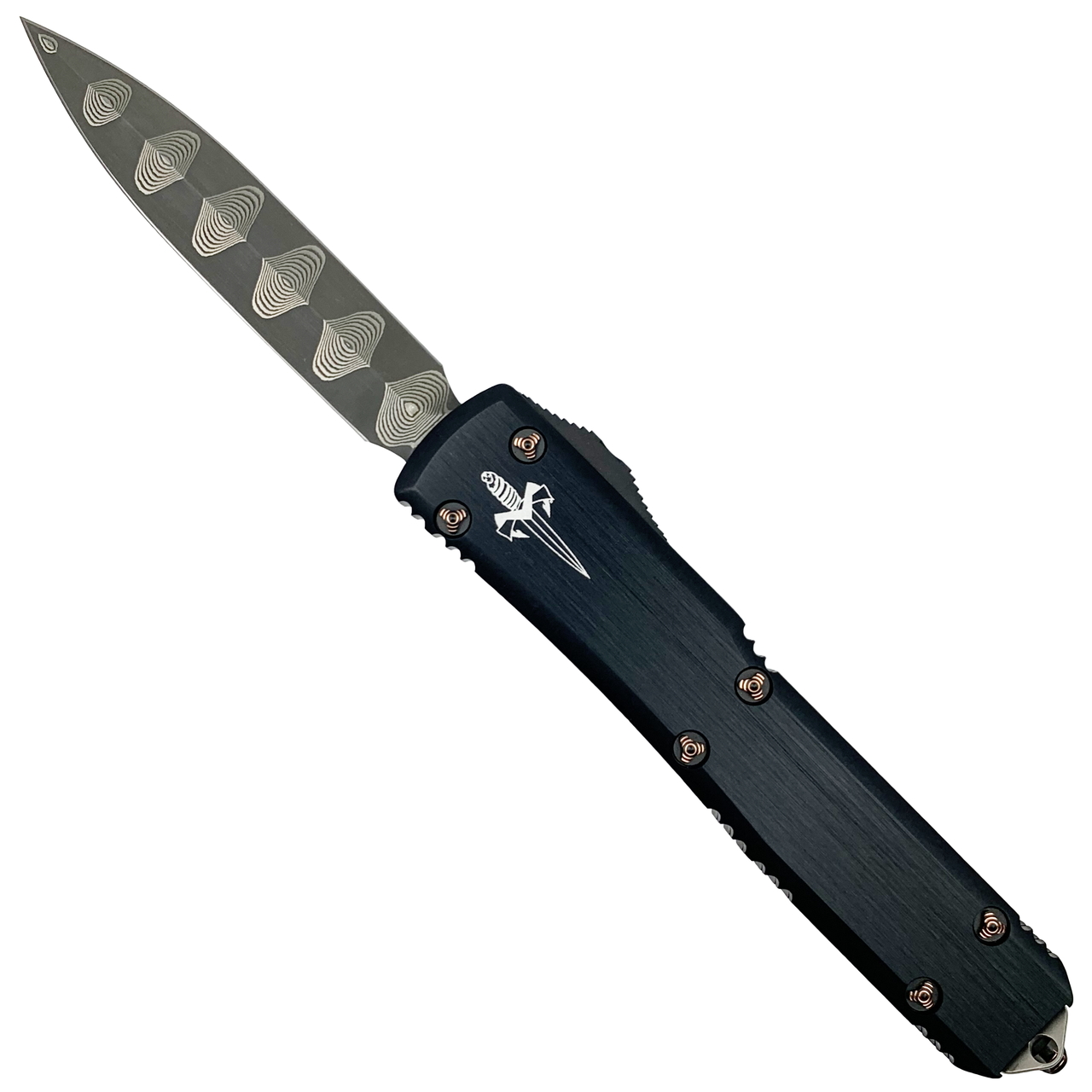 The Damascus steel is known for the bands and mottling that is welded together in a patterned fashion to create a decorative blade. Often times, this pattern is compared to flowing water. To create this steel, the manufacturer is going to combine different pure metals, depending on what they want to get out of the specific Damascus steel.

When Vegas Forge is discussing their Damascus, they say, “Vegas Forge produces the finest Damascus steel for sale with a focus on craftsmanship. Our stainless Damascus, carbon Damascus, and Mokume Gane are forged with expertise and careful attention to detail and are available in a stunning array of striking patterns. At Vegas Forge, we take pride in the variety, quality, and individuality so you get the very best selection of Damascus.” They go on to say, “Born from a forging tactic that dates back centuries, Damascus steel is known for its distinctive wavy pattern and undeniable strength. At Vegas Forge, our Damascus steel patterns aren’t just wavy – we painstakingly create stainless Damascus, carbon Damascus, and Mokume Gane in a range of patterns. When you purchase from Vegas Forge, you’re getting more than just steel: you’re getting an enduring tradition that will last a lifetime.”

The blade has been finished with a Vegas Forge ladder pattern Damascus finish. You are going to find the Damascus finish on Damascus blades, because the steel is created with the end result in mind. The Damascus steel is known for being artistic and beautiful. This Vegas Forge Damascus is finished with a ladder pattern in it. The background of the blade is a dark grey, with a lighter grey swirled onion-shaped pattern that goes up the length of the middle of the blade. You are really not going to find this finish on any other knife in the industry, so if that’s what drew your eyes to this knife, you are going to want to order this knife as quickly as you can.

The blade has been carved into a dagger shape. This is a double-edge blade that is most often sued for stabbing. Often times, the dagger blade shape is used in self-defense, which makes perfect sense for why it would be the optimal blade shape for a tactical knife such as this one. The two edges of the blade rise and fall equally, which creates an axis that sits in the middle of the blade, which also means that the point is going to be directly center. The tip is fine and sharp, ideal for piercing.

The handle on this Marfione Custom Knife is made out of an anodized aircraft alloy handle. Alloy is durable and lightweight, while also being inexpensive. Also, alloy is incredibly corrosion resistant, so it is a rather low maintenance handle.

There are a couple of disadvantages to an alloy handle though. First, it is going to feel incredibly cold in your hand if you lie in a colder environment. Because off this, if you know that you are mostly going to be using your knife in a colder environment, this might not be the one for you. Also, it does not offer as much texture as other ones, meaning you won’t have as secure of a grip. The last thing that is a disadvantage about alloy is that it is going to be prone to scratches.

All in all, alloy is a quality material for a quality knife. It is going to be durable and low maintenance.

That being said, the handle has been anodized black. The anodization process chemically changes the surface of the knife. This means that it is going to be more corrosion resistant, tougher, and more durable, while also being less prone to getting scratched. Really, the anodization process increasing all of the good aspects and qualities of the alloy while removing some of the more negative aspects of it.

The anodization process also adds in the sleek black color that helps to make this MCK knife look classy and elegant, while still looking relatively tough. On the face of the handle, the MCK logo has been stamped in white. This is the only white thing on the entire knife, so it does pop.

The shape of the handle is exactly what you would expect form an EDC knife. It is an even rectangle, with no curves or angles from the top of the knife clear to the butt of the knife. However, to provide you with enough texture, especially since the alloy does not offer the most texture, MCK has added rows of jimping at various points on the handle. The belly has three different portions of jimping, which are next to the blade, slightly below o the middle of the handle, and near the butt. The spien of the handle only has two, but the lever is textured, which will provide better grip as well. The rows of jimping on the spine are in the middle of the spine and near the butt of the spine. The butt of the handle is squared off, but the pocket clip does extend slightly off of it.

The pocket clip is attached in the standard position for an OTF knife—tip down. This is because the blade has to come out of the other end of the knife. The clip is silver, with the Marfione logo etched into it. The clip is also wider than your standard clip, taking up about half of the width of the handle. Also etched onto the clip are the date that the knife was made as well as the serial number of the knife.

The Ultratech Dagger is an Out-the-Front Automatic knife. The fact that it is an automatic knife does mean that it is going to fall under a strict set of laws in the United States. These laws state that automatic knives are not going to be legal in all states, cities, or areas. It is your responsibility as the user and purchaser, to know your local knife laws before buying and definitely before carrying this knife with you. You are the responsible party, not BladeOps.

While the legality of an automatic knife can serve as a disadvantage, there is a major advantage of owning an automatic knife: it is going to be easy to deploy. All you have to do is push the lever up that sits on the side of the handle and the blade will be open and ready to use in mere seconds. In situations where every second counts, Microtech has made it a breeze to bring this knife into play. There should be no fumbling with this knife.

This is an Out-the-Front knife, or an OTF knife, as it is commonly referred to. Wikipedia explains OTF knives as a type of pocketknife that has a blade that opens and closes through a hole in one end of the handle. This is different than other pocketknives that have the blade come out of the side. They go on to explain that OTF is only referring to the basic portion of the knife’s mechanical operation.

Like has been previously mentioned, this is an automatic OTF knife, which means that the blade travels within an internal track or channel in the same manner as a manual OTF knife. However, the automatic main spring drive and button mechanism that are enclosed in the handle do require the handle of an automatic OTF to be thicker and longer than a manual one.

The lever on the side of the handle is stepped, so that it has enough texture that you can easily find the mechanism and keep your grip on it while you are deploying the blade.

The blade on this version of the Ultratech measures in at 3.35 inches long, with an overall length of 8.36 inches long. This is a standard sized knife, but definitely on the larger end of the standard spectrum.

This is a larger knife, so the weight of 4.5 ounces is standard and reasonable. This is also in the perfect range for an EDC knife. The range falls between 3 and 5 ounces, because that range is going to provide you with the heft that you need to truly feel confident while you are using this knife. However, that range is also not going to weigh you down while you have it with you throughout the day. This ideal weight is just the cherry on top of the knife—it is going to be the perfect knife with minimal drawbacks to it. That’s typical of MCK though, you can expect the best when you purchase one of their knives.

Marfione Custom Knives (MCK) are well known for their high-end custom knives and products that feature exotic materials that turn mere tools into works of art. Highlights of this knife include copper ringed hardware, a spike grind blade profile and is lasered with the Marfione dagger logo. The Ultratech without question has been Microtech's flagship model since its inception in 1999. Pound for pound, this knife offers an incredible value of superior craftsmanship and premium materials that set it apart from many other double-action auto knives on the market today. Package comes complete with a presentation box, zipper pouch as well as a certificate of authenticity.

This custom knife is currently in stock at BladeOps. For this holiday season, it is the perfect high-end collector’s knife for that die-hard knife lover in your life. Order yours today by clicking here.