Microtech Knives is a knife manufacturing company that is famous for tis automatic knives. This company was founded in Vero Beach, Florida in 1994 and operated there until relocating to Bradford, Pennsylvania in 2005 and then to Fletcher, North Carolina in 2009. IN 2007 the company began manufacturing an American-made version of the Steyr AUG under the subsidiary name of Microtech Small Arms research (MSAR).

This company has long promoted itself as stressing quality with regard to tight machining tolerances, to within one thousandth of an inch. Custom knife makers, such as Greg Lightfoot have remarked that these tolerances are what makes the factory knives so close the custom design, saying, “It has the same quality as a handmade custom.”

Microtech has designed knives for use by the US Military such as the HALO, UDT, SOCOM, and Currahee models. Although Microtech has produced many styles of blades such as kitchen knives, fishing knives, arrow heads, and balisong knives; Microtech is most famous for tis tactical automatic knives. The most popular designs among their collectors are the “Out the Front” and the “Double Action” automatics. Microtech along with Benchmade Knives were responsible for the resurgence in the popularity of tactical automatic knives in the 1990s. These knives were seen more as a precision-made tool utilizing powerful springs and high-grade bushings as opposed to a cheap import.

Today we will be discussing the Microtech Blue Socom Elite tanto automatic knife.

The blade on the Socom Elite tactical is made out of M390 stainless steel. This steel is manufactured by Bohler-Uddeholm. They created one of the newer super steels that has made an appearance in the cutlery industry. This steel was developed specifically for cutlery that would need very high levels of corrosion resistance, hardness, and wear resistance. They were able to create such a high-quality steel because they used a third-generation powder metal technology that is able to enhance the good qualities of a steel. 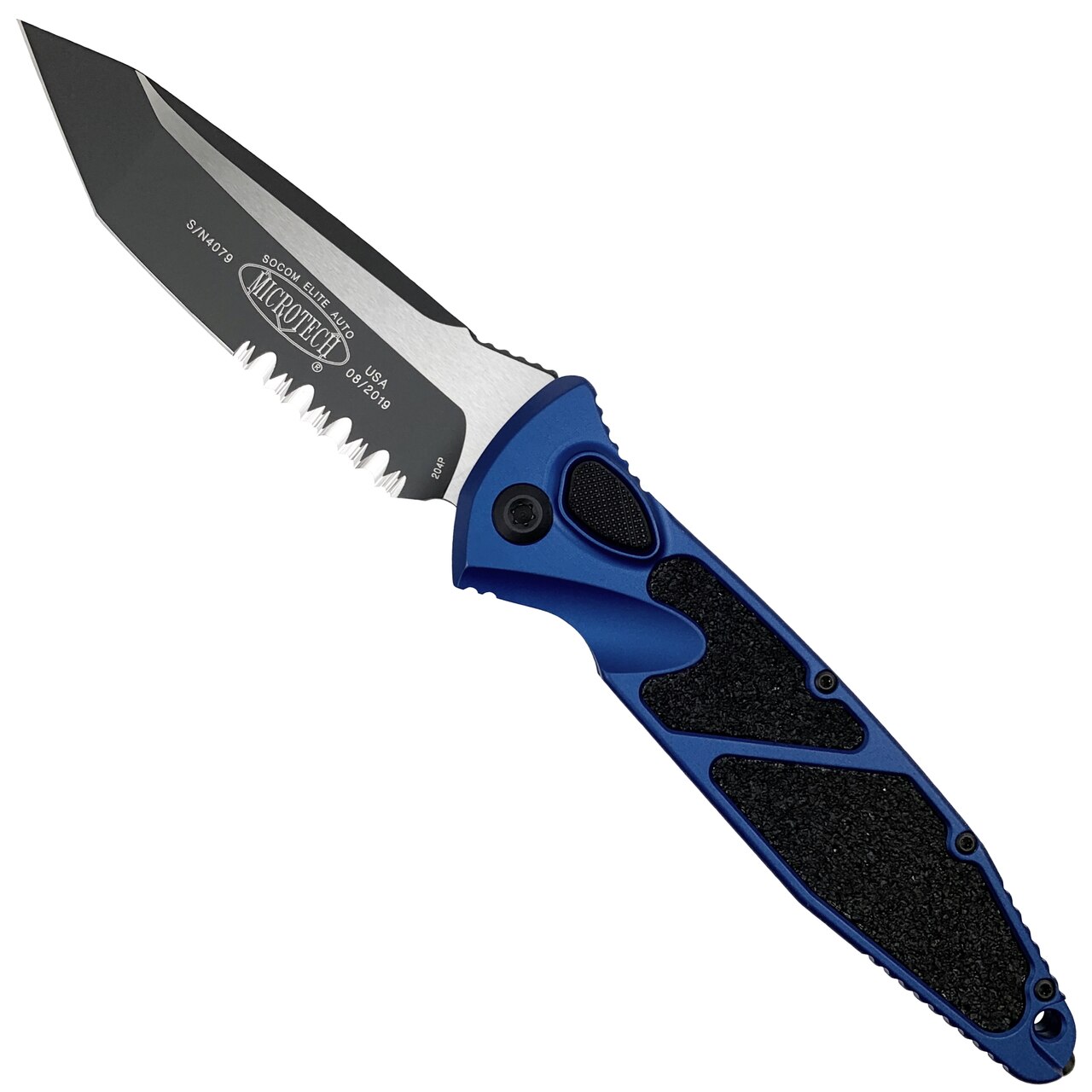 Bohler-Uddeholm also added in chromium, molybdenum, vanadium, and tungsten, which allow the blade to keep its crazy sharp edge. The hardness of this steel is what gives it the ability to have such a fine edge in the first place. This steel can be hardened to a 60-62 HRC. However, although Bohler-Uddeholm has created a very hard steel that is also durable, it is still going to be a little bit complicated to sharpen. This steel is also known as what is a “Microclean” steel, because it can be polished to a mirror finish.

The blade on this knife has been finished with a black finish as well as a satin finish. The black finish is going to prolong the life of the blade by creating a barrier in between the environment and the actual steel. This reduces the number of things that can actually come in contact with the steel, which works to improve corrosion resistance as well as wear resistance. The black finish is also going to cut down on all glares and reflections, because it is a matte finish. The black portions do make up the majority of the handle, with only a small stirp of the satin finish coming in near the base of the blade and tapering as it reaches the closer to the point.

The satin finish does make up part of the blade. The satin finish is the more popular finish. It is created when the manufacturer repeatedly sands the blade in one direction with an increasing level of a fine abrasive. This process works to showcase the fine liens of the steel. This portion of the lade is also going to have slightly better corrosion resistance, because the stain does work to improve that.

If you look at the history of the tanto blade shape, the shape originated in Samurai swords that were designed to pierce through hard armor. In the late 80s, Cold Steel revamped the blade shape and popularized it, keeping a lot of the same characteristics.

The blade has a spine that extends straight before angling slightly at the tip. The belly is actually not really a belly at all. Instead, it is a straight shot from the handle to about ¾ of the way up, where it angles upward to meet the tip. This does mean that the blade is going to have a lot of excess metal near the tip, which helps it withstand repeated piercing.

While this is definitely not going to be your everyday knife or general utility knife, if it comes to needing something pierced, there is not better option than a tanto. The blade is going to be tough, strong, and durable, perfectly reliable for when you need it most.

The blade on this knife has been sharpened into a combination edge blade. This means that the upper portion has been sharpened into a plain edge, with the lower half being sharpened into serrations. The combo edge is designed to give you the best of both worlds. Unfortunately, many people feel that both portions are actually too small to really utilize. While this may be true on some other knives, because the Socom Elite is so much longer than your standard pocketknife, you really shouldn’t have an issue with this.

The plain edge can be used to get cleaner cuts as well as working on fine detail work. The serrations are going to be perfect for sawing through thicker materials that you happen to come across.

The handle on this Microtech is made out of aluminum. Aluminum is a very popular option for cutlery handles for a few reasons. For starters, it is easy to machine, which is going to cut down on the cost of more complicated knives such as the Socom Elite. Also, aluminum is known to be a low-density metal. This means that aluminum is going to give the handle plenty of heft. This heft is going to complicate the ferocious blade perfectly. However, the heft does not equal weight. In fact, aluminum is a very lightweight handle material, prefect for a knife that measures in at 9.17 inches long.

Also, aluminum is known to be strong and extremely corrosion resistant. You are not going to have to put in too much maintenance with this blade or handle. This is ideal for a tactical folder, because sometimes you don’t have the time or energy to clean it perfectly and dry it well before putting it away. Neither the blade nor the handle should have any issue standing up to the wide variety of situations that law enforcement, military personnel, or even just a regular citizen may encounter.

The aluminum has been anodized a deep blue. Not only does the anodization process add in this color, it also improves each aspect of the aluminum. It makes the aluminum tougher, stronger, and more corrosion resistant. Plus, it adds a harder finish to it, which does mean that it is going to cut down on some of the scratches that it would normally accrue.

To combat the slipperiness, Microtech has added in inlays that promote grip. These are black, which contrast with the blue of the handle. The inlays are very texturized so that you can feel confident with this tactical knife no matter the situation.

The handle is relatively simple. It has more curves than angles, while still looking tough. Near the bottom of the handle, it does begin to taper. There is a lanyard hole on the butt that will fit most lanyards. This allows you to have the Socom Elite with you in almost any situation. To further promote control over your cuts, there are rows of jimping on the spine and belly both at the top and the bottom of the handle.

The pocket clip on this version of the Socom Elite is black, which matches the blade and the accents on the knife. It is kept in place by two black screws, which do match the rest of the hardware on this Microtech. The clip has a slight curve near the top of it, but after that, it is totally straight, going down the middle of the handle. Near the bottom of it, “Microtech” is tamped in silver.

This is an automatic knife, which does mean that it is not going to be legal in all states, cities, or areas of the United States. This is due to a strict set of laws across our nation that prohibited knives such as these. It is your responsibility as the purchaser and user to know your local knife laws before buying this knife and before carrying it. BladeOps is not the responsible party.

While the legality does prove to be a hindrance to automatic knives, there are a lot of positives to having this style of knife. For starters, it is going to be much easier to bring into play, because you don’t have to fumble around with the thumb stud or flipper mechanism. Instead, it is a simple button that rest on the face of the handle.

Automatic knives are also going to be smoother to open, as the internal mechanisms are going to be doing most of the work. With manual knives, they can feel a little bit stickier than this high-end automatic knife is going to.

The last drawback to the automatic knife is that it may prove a little bit more complicated to maintain. This is because the whole mechanism relies on the innards, so you do have to be careful in keeping the insides clean and dry.

The blade on this knife measures in at 3.98 inches long with a handle that measures in at 5.19 inches long. This means that when the blade is deployed, the overall length of the knife measure sin at 9.17 inches long, which is definitely on the larger side of the pocketknife spectrum. This version of the Socom Elite weighs in at 5.4 ounces, which is slightly heftier than the sweet spot, but only by .4 ounces, so it still shouldn’t weigh you down too hard. This Microtech is proudly made in the United States of America.

This automatic knife features a blue anodized handle and a partially serrated tanto style blade in a black and satin finish. The newly redesigned Socom Elite features an upgraded glassbreaker system in addition to a modified pocket clip, custom standoffs and a sub-frame lock design. Since the inaugural models debuted in 1996, the Socom line has been a standard for law enforcement and military personnel as well as anyone else looking for a workhorse of a side-open auto with exceptional cutting performance and power.

This is a new release at BladeOps, which is currently in stock. To secure yours today, click here.