Microtech Knives, Inc. is a knife manufacturing company, famous for its automatic knives, that was founded in Vero Beach, Florida in 1994, and operated there until relocating to Bradford, Pennsylvania in 2005 and to Fletcher, North Carolina in 2009. IN 2007 the company began manufacturing an American-made version of the Steyr AUG under the subsidiary name of Microtech Small Arms Research.

The company has long promoted itself as stressing quality with regard to tight machining tolerances to within one thousandth of an inch. Microtech has designed knives for used by the US Military such as the Halo, UDT, Socom, and Currahee models. Custom knife makers, such as Greg Lightfoot have remarked that these tolerances are what makes the factory knives so close the custom design: “It has the same quality as a handmade custom.”

Although Microtech has produced many styles of blades such as kitchen knives, fishing knives, arrow heads, and balisong knives; Microtech is most famous for its tactical automatic knives. The most popular designs among collectors are the Out the Front and the Double Action automatics. Microtech, along with Benchmade Knives was responsible for the resurgence in the popularity of tactical automatic knives in the 1990s. These knives were seen more as a precision-made tool utilizing powerful springs and high-grade bushings as opposed to cheap import.

And, once a Microtech HALO was featured on the television series 24.

Today, we will be discussing a newer release: the Microtech Socom Alpha Mini fixed

blade knife with Elmax steel and a stonewashed blade, which is available at BladeOps.

The blade on this knife is made out of Elmax steel. This is a European powder metal steel that is used in the higher end knives. Elmax has an advanced formula and the result is a very good all-around steel, a generation ahead of formulations like 154CM. There has been some controversy on the Internet over the grinding and heat treat of this steel, but in most peoples’ experience, it has been nothing but great.

A few years ago, Elmax was really pricey, but competition has driven it down to a reasonable price, making it a decent value. This steel is made by European Bohler-Uddeholm and is a high chromium-vanadium-molybdenum allowed powdered steel which gives it extremely high wear and corrosion resistance. Elmax acts a lot like a stainless steel, but it is a carbon steel. With this steel, you get superb edge holding and relatively easy sharpening, while still maintain a good resistance to rust. 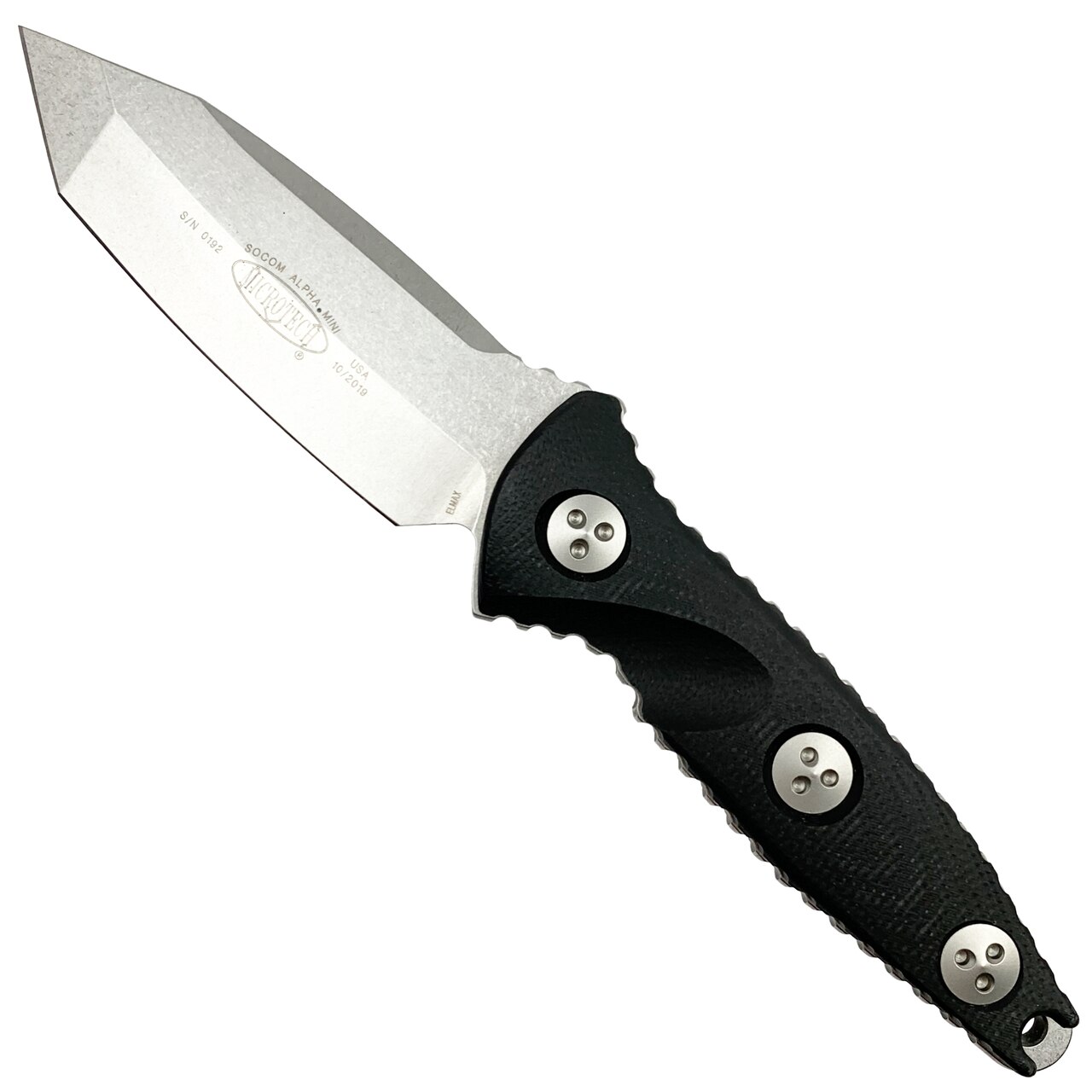 The blade has been finished with a stonewash finish. A stonewashed finish refers to tumbling the blade in an abrasive material. This finish easily hides scratches, while also providing a less reflective nature than a brushed or satin finished blade. There is a wide variety of stonewashed finishes based upon the abrasive shape, tumbling motion and the type of finish eh blade has before it enters the tumbler. A very positive benefit of stonewashed blades is that they are low maintenance and preserve their original look overtime; the stonewashed finish hides the scratches that can occur with use overtime. The textured appearance of the stonewash finish gives this knife a more rugged appearance. One of the other benefits of the stonewash finish is that it works to cut down on glares and reflections. Again, this benefit is due to the textured appearance of the blade.

This means that overall, the knife is going to be rather low maintenance because the Elmax steel is such a quality option as well.

This blade shape was originally designed for armor piercing, the tanto blade was popularized by Cold Steel and is similar in style to Japanese long and short swords. The tanto knife has a high point with a flat grind, leading to an extremely strong pint that is perfect for stabbing into hard materials. The thick point of the tanto blade contains a lot of metal near the tip, so it is able to absorb the impact from repeated piercing that would cause most other knives to break.

The front edge of the tanto knife meets the back edge at an angle, rather than a curve. As a result, the tanto blade does not have a belly, which is sacrificed in exchange for a stronger tip. Because it lacks a belly for slicing, it is not useful as a general utility knife. However, its extremely strong point allows it to be used in tough situations where piercing hard materials is required. This blade is definitely tailored to piercing tough materials, and if such a situation arises—you are going to be prepared.

The handle on this blade is made out of black G-10. G-10 is the common term for a grade of fiberglass composite laminate, which is a cloth material with a resin binder, that is used in a number of everyday carry and plenty of gear applications. Though they are made pretty differently, G-10 really is similar to carbon fiber when it comes to the properties.

This material is immune to corrosion and rust, it is easily textured, and because of that, it offers phenomenal grip. Also, like carbon fiber, G 10 tends to be on the more brittle side and because of this, it does not resist impact well at all. But this material does not have the same aesthetic pleasure that many other materials do, because it resembles plastic in both its appearance and its feel.

On this Socom Alpha Mini, the handle is relatively simple, with the unique portions being in the small details. The G-10 of this handle is just black, but there is thick, spaced out jimping down the entire spine and bottom portion of the handle. This jimping will give you a very secure grip on your handle at all times. The finger groove is a groove etched into the handle, which gives you a more comfortable portion to place your hand while using this knife on the harder tasks.

On the butt of the handle, there is a lanyard hole carved into the metal that is sticking out form the handle scales. This is a full tang knife, which means that the blade portion of the metal extends all the way down through the handle. Then, the G 10 handle scales are placed over this piece of metal, which results in a much stronger knife. This Microtech knife has been designed as a tactical knife, and for a tactical knife, you need to be searching for the strongest knife possible. A full tang knife is so strong because there are no weak portions where the handle and the blade are melded together.

Like I earlier mentioned, on the butt portion of the tang, there is a lanyard hole. If you tie a lanyard onto your tactical knife, you will be securing your knife against loss. If you loop the lanyard over your wrist, you never have to worry about the knife slipping out of your hand in crucial times. And, if you keep a lanyard tied to your knife, you can withdraw your knife quicker. Another benefit, although not a major benefit, is that the lanyard can provide greater visibility as well as adding a touch of personal style to your knife. Everyone has their own reason for using a lanyard on their fixed blade, but I promise you that there is no shortage of good reasons to tie a lanyard to this knife.

This is a fixed blade, which has plenty of benefits when it comes to your tactical knife. For starters, the blade can be longer and thicker than a folding knife because it doesn’t have to fit inside of the handle. Because of this added length and thickness, you get obvious bonus strength. Fixed blades are going to be tougher too, because they are so much thicker, and much less prone to breaking.

And because this is the full tang blade, you don’t have to worry about any weak spots in the blade. In fact, even if the handle scales did crack or fall off, you would still have a full knife to work with. Plus, the fixed blade “mechanism” makes maintenance a breeze, because all you have to do is quickly wipe down your blade after each use and oil it every so often.

The sheath that comes with this knife is made out of Kydex. Kydex is a thermoplastic acrylic-polyvinyl chloride material that is often used in sheaths. This is a more modern material, especially when compared to the other common sheath materials. One of the greatest advantages about Kydex is its durability. This material can literally be submerged in saltwater and not just survive but thrive. Kydex is going to hold up very well to many different environments.

Unfortunately, Kydex does feature a variety of major disadvantages. For starters, Kydex basically looks like a lump of plastic—it has no personality. And, Kydex sheaths are loud. There is no way to use a Kydex sheath and have it stay quiet. There is going to be noise when you draw your knife and again when you try to put the knife back in the sheath. Some people do like the satisfying click of Kydex, but you should be aware of it. I would say that the biggest disadvantage of this sheath material is that with repeated taking out and putting back a knife into a Kydex sheath will dull your blades edge.

The blade on this knife measures in at 3.72 inches long with a blade thickness of 0.17 inches thick. The handle portion of the knife measures in at 4.45 inches long. This means that the overall length of the knife is going to come in at 8.17 inches long. This is a fairly standard size for a pocketknife, but it is slightly on the smaller side when it comes to a fixed blade, which is why it is called the Socom Alpha Mini. You will still have full control with this knife and be able to completely rely on it. The overall weight of the knife, which means that it includes the sheath weight, comes in at 6.67 ounces. This will provide you with plenty of heft so that you can successfully rely on this knife. This Microtech fixed blade was proudly made in the United States of America.

Adding to the prestigious Socom lineup, the Socom Alpha Mini is similar in aesthetics to the folding version but includes G-10 handles for a superb grip and the jimping all around the handle provides extra security regardless of grip position.

This is a new arrival at BladeOps. To get yours today, click here and order yours now.