Microtech Knives, Inc. is a knife manufacturing company, famous for its automatic knives. It was founded in Vero Beach, Florida in 1994, and operated there until relocating to Bradford, Pennsylvania in 2005, and to Fletcher, North Carolina in 2009. In 2007 the company began manufacturing an American-made version of the Steyr AUG under the subsidiary name of Microtech Small Arms Research (MSAR).

The company has long promoted itself as stressing quality with regard to tight machining tolerances, to within one thousandth of an inch. Microtech has designed knives for use by the US Military such as the HALO, UDT, SOCOM, and Currahee models.

Custom knife makers, such as Greg Lightfoot, have remarked that these tolerances are what makes the factory knives so close to the custom design: “It has the same quality as a handmade custom.”

Although Microtech has produced many styles of blades such as kitchen knives, fishing knives, arrow heads, and balisong knives; Microtech is most famous for its tactical automatic knives. The most popular designs among collectors are the “Out the Front” and the “Double Action” automatics. Microtech, along with Benchmade Knives, was responsible for the resurgence in the popularity of tactical automatic knives in the 1990s. These knives were seen more as a precision-made tool utilizing powerful spring and high-grade bushing as opposed to a cheap import.

In terms of media coverage, there was an episode of the TV series “24” that featured a Microtech HALO.

Microtech says, “For over 20 years, Microtech has been working to build a long-standing tradition of innovation and quality with each knife that leaves our facility. In a world of ever-changing technology, we strive to ensure our customers have access to the latest advancements in knife making, while still continuing to maintain a humanized element throughout the manufacturing process. As the company continues to grow, our focus remains the same: deliver revolutionary products that exceed the industry’s ever-increasing desire for groundbreaking ideas. Thank you to our customers, for the years of loyalty and support, and for motivating us to better ourselves so that we may continue to rise above your expectations.”

Today we will be discussing one of the newer arrivals at BladeOps: the Microtech Violet UTX-85 OTF automatic knife.

The blade on this version of the UTX-85 is made out of CTS 204P stainless steel. This steel can reasonably be compared to Bohler-Uddeholm’s M390 steel. However, it does have a little bit more tungsten than the other steel. This steel is known for having an incredibly high wear and corrosion resistance. Part of this is due to the fact that it does have a fine-grained alloy, which also means that this is a good choice for high end folding knives, such as the Ultratech, as well as some fixed blades.

This blade is not going to be your all purpose, everyday knife. However, it does one thing, and it does it better than any other knife will be able to do that. It has a crazy strong tip because of the amount of metal that is near the tip. Because of this, it can pierce through hard and tough materials easily. This blade shape can also endure repeated stabbing, without breaking, snapping, or chipping, like other blade shapes would. Not only that, but you will actually be able to hammer, dig, or pry with this blade shape. Because the two edges meet at an angle, instead of the regular curve, the tanto blade shape has no belly. And while the ancient Samurai swords could produce some long slicing movements, a belly is going to give you the best slicing ability. So, while you will be able to manage some slices with the Ultratech Hellhound, it is not going to act like a drop point blade shape.

The tanto blade is one of the strongest blade shapes, so this knife makes for an excellent tactical, fighting, or survival knife. One of the drawbacks to the tanto blade is that even though the point is strong, it is hard to control. This means that it will not be a great option for delicate detail or tasks like skinning or peeling. While this knife is not going to be able to manage performing all of your tasks, it is going to excel at the tasks that it is designed to do.

The handle on this knife is made out of 6061-T6 aluminum. Aluminum is a very low-density metal used in knife making and is very corrosion resistant. Since it is such a soft metal, it is primarily used in knife handles and sometimes hard anodized for aesthetics and wear resistance. Aluminum is also the most abundant metal in the earth’s crust. 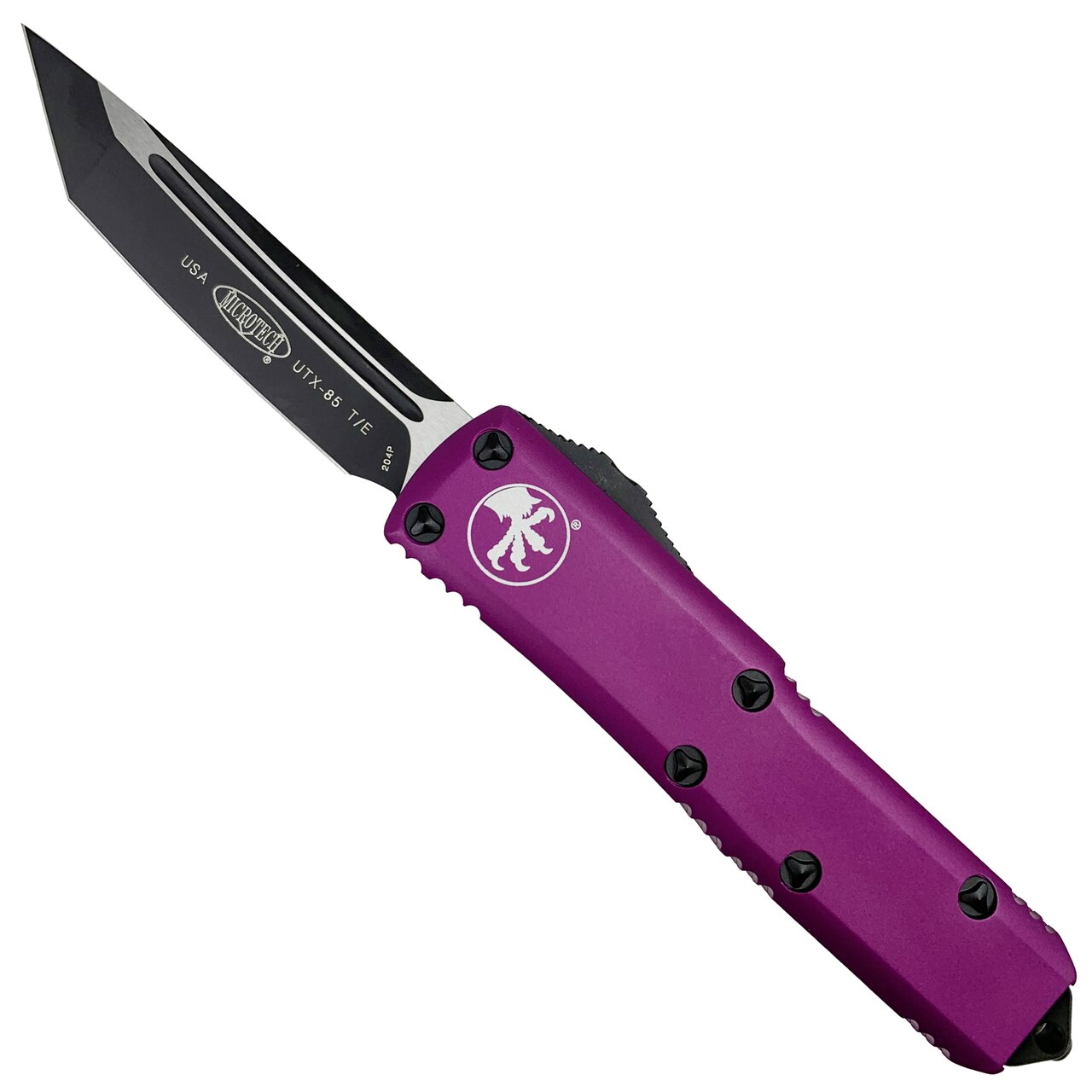 Most knives use a type of Aluminum Alloy called 6061-T6 aluminum, which means the type of aluminum is 6061 and it is T6 tempered. 6061-T6 aluminum has one of the highest yields and tensile strengths of all aluminum alloys. 6061-T6 is used extensively in aircraft, and is often referred to as “aircraft aluminum,” and sometimes this is seen as a gimmick, kind of like “surgical stainless steel.”

Aluminum alloy is cheaper to machine and produce than Titanium, and is lighter, weaker, and less resistant to wear. For the most part, Aluminum is an inferior metal to Titanium aside from its lightness. However, when producing complex knives that require a large among of CNC machining, such as this knife, aluminum is much cheaper to produce and the material costs less.

The handle on this knife has been anodized violet. The anodization is created by submerging the aluminum in an electrolytic solution bath along with a cathode. When a current is passed through the acid solution hydrogen is released from the cathode and oxygen forms on the surface of an anode. This results in a metal oxide film growing on the surface of the handle. The anodization creates a protective layer between the steel and the aluminum, as well as adding durability, toughness, strength, and a sleek violet color.

The handle on this knife is a standard shape for an OTF. It is mostly rectangular with the top of the knife flaring out only slightly. There are a few rows of jimping scattered across the handle to work to give you a more secure grip. There are two rows of jimping on the belly and two on the spine. These rows can be important and crucial since the aluminum handle is not going to give as much texture as some would desire.

The pocket clip is black and wider than your typical pocket clip. The date of manufacturing as well as the serial number is on the clip as well. The black clip matches the rest of the hardware on this knife.

This UTX is an automatic knife, but not only is it an automatic knife, it is also an Out the Front knife. An OTF knife is a pocketknife with a blade that opens and closes through a hole in one end of the handle. This is different from the other majority of knives, which are either standard folding knives or are fixed blade sheath knives that have no mechanical operation.
OTF only refers to the basic portion of the knife’s mechanical operation where the blade slides parallel with the handle to deploy. OTF knives may be further subdivided into manual knives or automatic knives.

The UTX-85 knife is a dual action automatic knife, which means that the blade deploys and retracts with a multifunction button and spring design. Wikipedia says, “Despite popular belief and movie magic, double-action OTF automatic knives are not powerful enough to open when pressed against an opponent and then pushing the button. Double-action sliding autos are only spring-powered 10 to 12 millimeters; afterwards, kinetic impetus slides the blade to full open. This is possibly a misbelief based on confusion with the ballistic knife which has a secondary handle tube with a robust coil spring for launching a fixed blade knife. However, some single-action autos, such as the Microtech Halo V, have enough power to penetrate a human target.”

Because this is an automatic, it is not going to be legal in all states, cities, or areas of the United States. There are a strict set of laws that surround automatic knives in the US, due to their tumultuous history. It is your responsibility as the user to know your local knife laws. BladeOps is not the responsible party.

There is a sweet spot for EDC knives, weighing in between 3-5 ounces. This range provides you with the heft that you need to feel confident while working with this knife, without actually weighing you down. As you can see, this Microtech falls in that range.

This knife is proudly made in the United States of America.

This out-the-front model features a violet anodized handle and a tanto style blade in a black and satin finish.

This fantastic double-action OTF knife is the perfect size and, as the name exhibits, is 85% of Microtech's flagship model--the Ultratech. The newly redesigned UTX-85 features a new contoured handle, updated tri-angle hardware, a redesigned thumb slide and the glass breaker includes a press-fitted ball bearing. Each Microtech OTF knife has extremely sophisticated internal mechanisms which improve the overall operational functionality and reliability and its ability to be operated with just one hand makes it all the more practical.

This Microtech is a new arrival at BladeOps, but it is also going quickly. Order yours today by clicking here.