Piranha Knives specialize in excellent automatic knives, such as the one that we will be discussing today. All Piranha products are made in the United States of America and feature superb design and craftsmanship. It is a major advantage that they are all made in the United States of America, because you know that you can rely on the quality. You will also know that you helped give a fellow-American a job when you purchase a knife from Piranha. They use modern technology and cutting edge materials to make a highly quality automatic knife. They have a wide variety of different models and every single one of them would be a great option for you. Also, Piranha Knife Company offers you a lifetime limited warranty—which is unusual in the industry and a true testament to their willingness to stand by their high quality knives.

Today we will be discussing the Piranha Desert Camo 21 Automatic knife, which is a new arrival at BladeOps. This knife is in stock, so you can purchase yours right now.

The blade on this knife is made out of 154CM steel. This is a high end knife steel that is relatively hard. This steel is usually considered an upgraded version of 440C because of the added molybdenum. The molybdenum helps the steel to have superior edge holding, especially when compared to 440C while also retaining similar excellent levels of corrosion resistance. This steel has a good toughness that will get you by when it comes to most uses. The steel is also capable of holding an edge well. Speaking of edges, with the right equipment, this steel shouldn’t be too tricky to sharpen.

The blade has been finished with a black coating. This is going to prolong the life of the blade, because it creates a barrier in between the steel and the environment. In turn, this increases the wear and corrosion resistance of the blade. Not only that, but the coating is matte, which means that it is going to cut down on many of the glares and reflections that would happen. This is a bonus when it comes to a tactical knife because no reflections will give away your position in the field. When a coating is applied evenly, it is also going to make your cuts smoother as well.

The blade on the Desert Camo 21 has been carved into a drop point blade shape. This is the most common blade shape that you are going to find on the market. This is due to the fact that it is both tough and versatile. 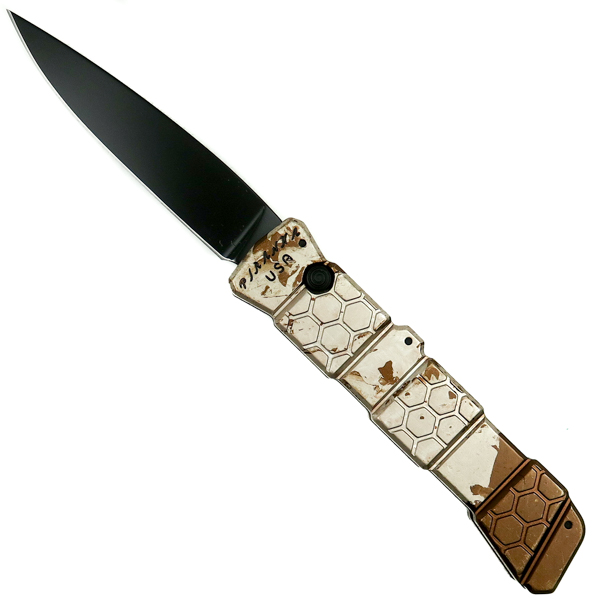 For starts, the spine of the blade stretches in a slow curve toward the point of the knife, which does create a lowered point. The lowered point is an advantage to this tactical knife because it gives you more control when you are using it. This lowered point is also where the knife got its name from, it is lowered, or dropped.

The next thing that creates a unique and useful knife is also one of the points characteristics. The point is pretty broad, which is where the characteristic strength of the knife comes from. The strength of a drop point is what people love them for: you can almost do anything with a drop point. That being said, the point on the desert camo is not quite as broad as many that you would find, but you also won’t have to be worried about your point breaking when using it.

The last thing that makes the drop point such a show stealer is the fact that the belly is large and curved. This means that slicing with the Piranha Desert Camo 21 is going to be a breeze. As a key, the bigger the belly, the easier it is to slice with. This characteristic comes in handy in almost any situation—including tactical ones.

There is only one drawback to the drop point blade shape: because the belly is so broad, it does take away some of your ability to pierce with. This can be a drawback, but because the drop point on this Piranha is not as broad as on some others, you shouldn’t have any issues. You won’t be able to excess at piercing, but it also won’t be out of the question.

The handle on this Piranha is made out of 6061-T6 aluminum. Aluminum is a common knife handle material and 6061-T6 aluminum is the most common alloy that is used. Aluminum is commonly used because it is a low-density metal. This means that it is not going to weigh you down too much. While this is a medium sized knife, you won’t even have to worry about the weight, because the aluminum will keep it so low. Even though it is a low-density metal, it is still going to give the heft that many people look for; especially in a tactical knife.

Aluminum is also very durable and highly resistant to corrosion. These aspects of the handle are going to lead to very low maintenance time. This way, you won’t ever have to worry about if your handle is clean enough or if it is going to continue looking as nice as it originally did.

6061-T6 is the most commonly used aluminum alloy in the cutlery industry because it does offer the highest tensile strength of any of the alloys. This way, if you are ever in a jam, and the Aquamarine is the only tool you have, you’ll be able to rely on the strength of the handle.

The handle has been anodized into a distressed desert camo pattern. Not only does the anodization give the handle such a nice feature, it also works to increase the strength, durability, and corrosion resistance of an already quality material. Aluminum is one of the most common materials that is anodized, because it takes the anodization really well. One of the other nice aspects of a handle being anodized is that the process actually chemically changes the handle. This means that while the handle can get scratched (although not super easily, since anodization increases the hardness of it as well), the color of it cannot peel off. This will just work to prolong the look of this handle for longer periods of time.

The handle on this knife is rather simple, but it is effective for a solid grip on the knife. The handle has roughly seven different “sections.” These different sections are split up by deeper grooves. Each section protrudes slightly differently on the sides of the handle, which does mean that you are going to have more grip and texture when using it. Three of these sections have a honeycomb texture carved into them, which will give you the texture and grip that aluminum on its own cannot provide. There is no finger guard and there is no lanyard.

The pocket clip on this knife has been made out of titanium, so you know that it is never going to let you down. It has been anodized a matte black, which pairs nicely with the handle and matches the blade. It is kept in place by a single black screw, which does match the rest of the hardware on the knife. Speaking of the hardware, it is all stainless steel.

The clip is not a deep carry clip, but it will stay securely in your pocket. It tapers toward the end of the tip.

This is an automatic knife. Because of that, you, as the user and the purchaser, need to be aware that there are some strict laws in the United States that surround automatic knives. They are not legal in every city or state. Each area is going to have a unique set of rules surrounding knives. It is your job to know your local laws before purchasing or carrying this knife. BladeOps is not responsible.

Automatic knives are nice, because they are, well, automatic. This means that there is not going to be any fumbling when you need to bring it into play. This is why some of the best tactical knives are automatic. In a situation where every single second counts, you are not going to want to be fumbling around while trying to open your defense weapon.

That being said, sometimes the automatic function can be a drawback. While this knife does feature a locking system, in which the blade is either locked in the closed or opened position, accidents do happen, and this may come open in your pocket, which can be dangerous.

Automatic knives are great, because they can be opened with only one hand. This means that in either a working or defense situation, you will have better access to the knife. Of course, automatic knives are a little bit harder to maintain, because you have to worry about the hinge and the spring.

Just like at the Blackjack table, the 21 is all that you are striving for. Piranha knives have certainly made their mark in the automatic knives arena for their tight tolerances, consistent quality and competitive pricing. Thanks to their unique custom-like anodized handle colors and a multitude of knife models with their respective blade variations, Piranha can most certainly appeal to every knife user. All models feature all-stainless steel hardware in addition to a titanium pocket clip. This model features a distressed desert camo anodized aluminum handle, a drop point style blade in a black finish and the pocket clip is statically designed for tip up carry only on the traditional side of the handle.

This Piranha knife is in stock right now at BladeOps, so buy yours today.