Pro-Tech describes their point in the market as the space where the “art of modern manufacturing excellence meets old world craftsmanship.”

This is a family owned company that has been around and building American Made knives ever since 1998. Each of their knives is a blend of the finest materials available as well a Pro-Tech’s commitment to craftsmanship. They build their knives with only the most current high tech manufacturing processes that include CNC Machining, Wire EDM, and laser cutting. These high tech components are assembled and hand fit and finished by their dedicated and caring craftsmen right in their factory.

Let’s discuss the Pro-Tech M2607 Feather Textured Magic 2 “Whiskers” which is a new arrival to BladeOps. This knife is in stock, so order yours now!

The blade on this knife is made out of 154CM stainless steel. This is a higher end steel that is made by Crucible Industries. This is not surprising because Crucible is known for making higher end steels for higher ends knives, such as this Pro-Tech one.

154CM is a relatively hard steel that is known to be an upgraded version of 440C. This is accomplished because 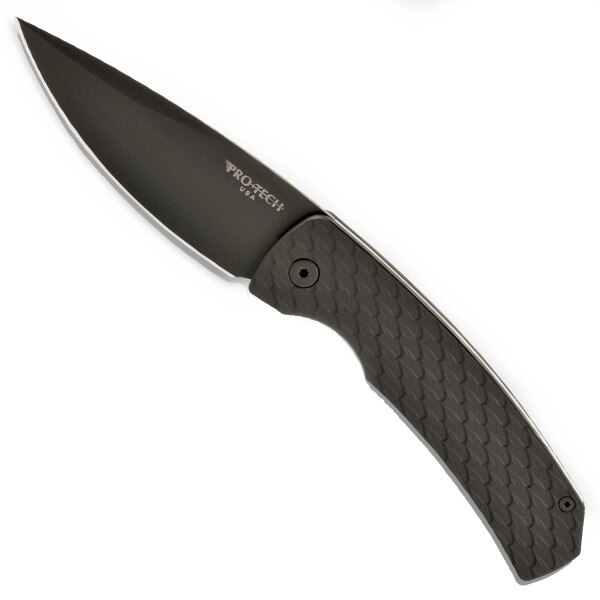 Crucible added in Molybdenum, which helps the blade have superior edge holding capacities while still retaining the same levels of corrosion resistance. This steel is known to have decent toughness, which is going to be good enough for the bulk of tasks that you are going to come across. When you have the right equipment, it is not going to be too complicated to sharpen—but it is not the easiest steel to sharpen either.

The blade has been finished with a DLC black coating. This stands for Diamond-Like Carbon coating, which is renowned as one of the best coatings that you can find on a blade. This coating is known for being pitch-black, which means that there are going to be no glares or reflections. However, that is not why it is such a sought after blade finish. The real reason is because of how incredibly hard it is. This is the hardest blade coating that you are going to find, which means that it is not going to chip or wear off with time or hard use.

The blade on this “Whiskers” has been carved into a spear point blade style. The spear point is often compared to a needle point, because they are both known to be good at piercing. However, they do have plenty of differences. The blade shape is made up of a symmetrically pointed blade that has a point in lien with the center of the blade. Both edges of the blade rise and fall at the same time, which is how it creates a point that is right in the middle.

One of the things that is different between a spear point and a needle point is how strong it is. The needle-point has a sharp but weak point, while the spear point has a strong point hat is still sharp enough to pierce with. The point is also slightly lowered, which does give you a little bit more control over the blade.

The last thing that is a big advantage of the spear point blade is that it does contain a small belly that can be used for some cutting. If you were to compare this belly with that on a drop or clip point, the belly would seem minuscule. But, it is going to allow you to get the job done and act as a little bonus with this blade shape.

All in all, the spear point blade is known to be a hybrid shape, because it has the belly, it has the strength, and it has the sharp point. It really gives you a little bit of everything. This means that it is not going to excel at a single thing, but it makes a phenomenal general utility blade shape.

The handle on this Magic 2 is mad out of 6061-T6 aluminum. Aluminum is commonly used on knife handles because it is such a durable metal. It is also a low-density metal, which means that it is going to give you the heft hat you need, without actually weighing down the knife. This is one of the biggest advantage that aluminum can offer you, because you definitely want the heft to back you, but you don’t want a crazy heavy knife. The only reason that this can be this lightweight is because it is made out of aluminum.

One of the other benefits to aluminum is that it is very corrosion resistant. This is a big advantage because it cuts down on maintenance time considerably. However, aluminum also has high conductive properties, which does mean that this metal is going to feel super cold fi it is in a cold environment. Aluminum is also prone to scratches and dings, which will accumulate over time.

The most commonly used aluminum alloy is the 601-T6 alloy because it offers the highest tensile yield of any of the aluminum alloys.

The aluminum handle has been anodized black. The anodization process is a way to increase the durability, corrosion resistance, and toughness of aluminum. It also adds in a sleek, black look to it. This helps to cut down on many of the scratches that you would have accumulated over time. It does increase the cost slightly, but it is worth it to have a knife that is going to last for a longer period of time.

What really sets this handle apart is the feathering pattern. This pattern is made up of ridges that look like feathers covering the entire handle scale. Not only does this add a unique look to the blade, it also provides you with enough texture to be confident in your grip on it.

The fact that the clip is statically designed does mean that it is not going to be an ambidextrous carry knife. That is a disadvantage. But, if you want to look at the positive side of things, this also means that there is not going to be drill marks all over the handle. This does create a sleeker, more uniform look.

This is an automatic knife that utilizes an incognito bolster release system to deploy the blade. To operate, simply manipulate the bottom portion of the top handle scale with your thumb from right to left—firing the blade with classic Pro-Tech speed. Repeat the same steps in reverse to close the blade.

This is an automatic knife, which does mean that it is going to fall under a strict set of laws in the United States. This means that it is not going to be legal in all states or cities. Like always, it is up to you, the user, to know your local knife laws before buying or carrying this knife. BladeOps is not the responsible party in this situation.

Automatic knives are easier and quicker to bring into play, because you don’t have to fumble with the blade to get it open. This is why automatic knaves make superior tactical knives—you don’t want to be fumbling with your knife when every single second counts. One of the only drawback to an automatic knife, other than legality issues, is that automatic knives can be a little bit harder to maintaining. This is because you have to worry about the hinge and the spring.

The blade measures in at 3.75 inches long with a handle that measures in at 4.875 inches long. This creates a knife that has an overall length of 8.625 inches long, which is a longer knife that you are going to come across. This is also a heftier knife, weighing gin at 5.9 ounces. This is mostly due to the pure size of the knife, but some of it is due to the materials used. While this is going to be on the heaviest end of the spectrum of a knife that you are going to have with you at all times, it is not so heavy that it is annoying to have with you at all times. This knife was made in the United States of America, so you can feel proud to own, carry, and use this knife.

The Newest Magic 2 "Whiskers" series of knives is the second creative collaboration with designer Mike "Whiskers" Allen that utilizes a incognito bolster release system to deploy the blade. To operate, simply manipulate the bottom-portion of the top handle scale with your thumb from right to left--firing the blade with classic Pro-Tech speed. Repeat the same steps in reverse to close the blade. The Magic 2 model is an upgraded version of the original--offering increased specs both in blade size and overall width. This model features a black anodized aircraft aluminum handle complete with feather texturing, a spear point style blade in a DLC (Diamond Like Carbon) black finish and the deep carry pocket clip is statically designed for tip up carry only on the traditional side of the handle.