SOG’s story begins in Vietnam, where members of a highly classified US special ops unit - known as MACV-SOG - carried a unique combat knife into the jungle on covert missions. Years later, in 1986, that knife inspired a young designer, named Spencer Frazer, to found SOG Specialty Knives. His mission: to reproduce the original SOG Bowie knife and pay tribute to the special ops unit that created it. What began as a single commemorative model soon became a full line of innovative tools - field-proven by US Special Forces, even honored as the Navy SEAL knife of choice. Today, SOG knives are carried with confidence into the most demanding situations. SOG says, “Forged out of tradition, hardened in the field, honed for you. So, whether you're protecting others or leading an epic hunting expedition, tackling one of life's everyday challenges or facing your most extreme conditions yet, lead the way with SOG.”

SOG says, “SOG was named in honor of a covert US Special Ops unit that fought in Vietnam. That unit was known as Military Assistance Command, Vietnam - Studies and Observations Group (MACV-SOG). Its existence once denied by the US Government; it wasn't until long after the war that the SOG story could even be told.

The following is excerpted from "US ELITE FORCES-VIETNAM," an article by Leroy Thompson that further describes the nature of this specialized group and its secret missions:

Separate from "conventional," unconventional operations of the 5th Special Forces Group were the clandestine operations of Military Assistance Command Vietnam/Studies and Observations Group (MACV/SOG). The Studies and Observation Group (SOG) was a cover name to disguise SOG's real function, and the name "Special Operations Group," as it was sometimes called, described its real mission more accurately. Activated in January of 1964, SOG was a joint services unit composed of members from all four branches of the armed forces, including Navy SEALs, Marine Recons, Air Force Special Operations pilots of the 90th Special Operations Wing, but predominantly Army Special Forces.

Today we will be discussing the SOG Flash II Spring Assist knife.

The blade has been finished with a satin finish, which is the most common blade finish that you are going to find in today’s cutlery industry. The finish is created when the blade is repeatedly sanded in one direction with an increasingly fine level of a very fine abrasive. The most common material used to create this finish is a fine sandpaper. This process does a few things. The first is that it shows off the bevels of the blade. The second is that it shows of the fine liens of the steel. These two characteristics are going to give the blade a traditional look that cannot be found with any other blade finish.

The blade has been carved into a drop point blade shape. This is one of the two most popular blade shapes on the market today. This is for a couple of good reasons: it is extremely tough and extremely versatile.

The spine of the blade begins at the handle and slowly curves toward the tip. This creates a lowered tip, which does allow you to perform fine detail work with this knife. And, because the tip on the drop point is broad, it is going to give you plenty of strength. In fact, the drop point is known for how strong it is. The excess metal near the tip does allow it to take on tougher tasks without breaking or chipping than the similar clip point blade could do.

The only major drawback to a drop point blade is that because of the broad tip, it is not going to have as high of piercing or stabbing capabilities. You need to remember that you do sacrifice the ability to pierce and gain the immense strength. 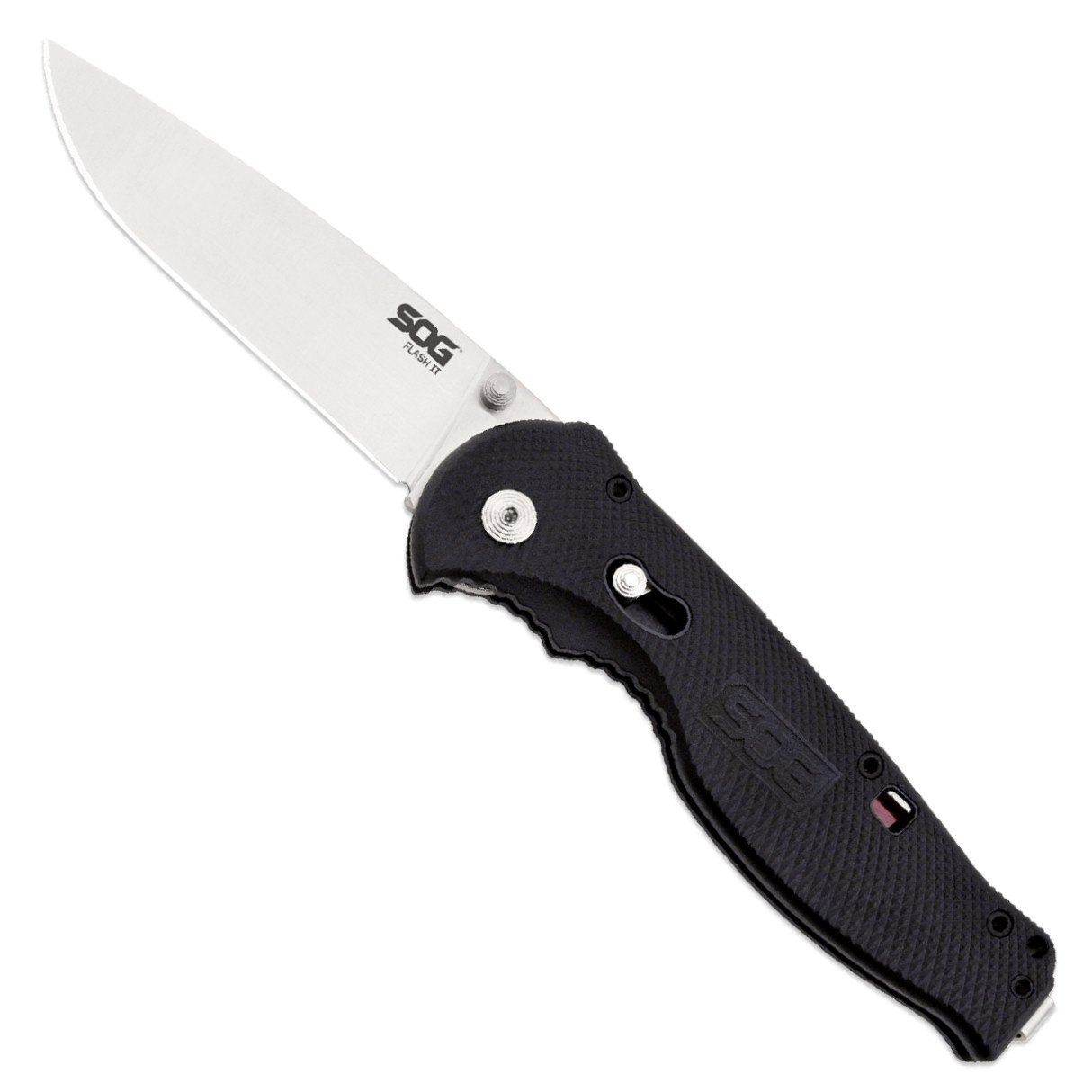 The handle has been made out of Glass-Filled Nylon, or GFN. This is a man-made material that has all of its fibers arranged in a haphazard manner. This means that it is going to be strong no matter which way it is stressed, rather than just a single direction like many similar materials. This is what makes it a nearly indestructible material.

Really, the only disadvantages when it comes to tis material is that some people feel that it has a somewhat plastic-y feel to it. This makes it feel cheaper and less elegant. However, this is not something that is visual, so the appearance of the handle can still be just as elegant. The other disadvantage is that it does not offer as much grip as G-10 could.

The handle does have an extreme texture spanning the entire face of the front and back handle scale. This is going to ensure that you do not slip when you are using it. It also works to provide the texture and grip that GFN is known to be lacking.

The shape of the handle on the Flash II is unique and extreme. The spine is nearly completely straight, although it does dip in slightly right before the butt, which does make the butt flare out slightly. The flared butt is going to give you a better hold on the knife.

The pocket clip on the Flash II is a deep carry reversible clip that has been designed for tip up carry only, but it is eligible for either a left or right handed carry option.

To start, the deep carry characteristic is important because it does two major things. The first is that it is going to allow the knife to sit lower in your pocket, which does conceal it better than a non-deep carry clip. When it comes to a rugged tactical knife like this one, concealment may be key. The other thing that it does is keeps it more secure inside of your pocket. This is because it does sit lower, so it is less likely to slip out as you goa bout your day.

The next feature that sets this pocket clip apart is that it is reversible. This allows you to carry it in the way that you feel most comfortable, whether you are left or right handed.

This is a spring assisted knife. A spring assisted knife is a type of folding knife that uses an internal mechanism to finish the opening of the blade once the user has partially opened it using a thumb stud that is attached to the blade. The Flash II has been equipped with a thumb stud, which allows you to open the knife with only one hand. The thumb stud is easy to use and quick to get the hang of. The only drawback to a thumb stud is that when you are opening the knife, it does put your fingers in the path of the blade. Keep this in mind when you are first getting the hang of the knife, so that you don’t accidentally slice your fingers.

The Flash II has also been equipped with SOG Assisted Technology. SOG describes this by saying, “SOG Assisted Technology (S.A.T.) works through the balance of opposing high-tension coil springs. As you initiate the opening action, the force propelling your blade open becomes greater than the force keeping it closed. The result is a blade that springs open instantly once it is engaged, seemingly on its own.” This means that the knife is going to open more smoothly than a typical spring assisted knife. 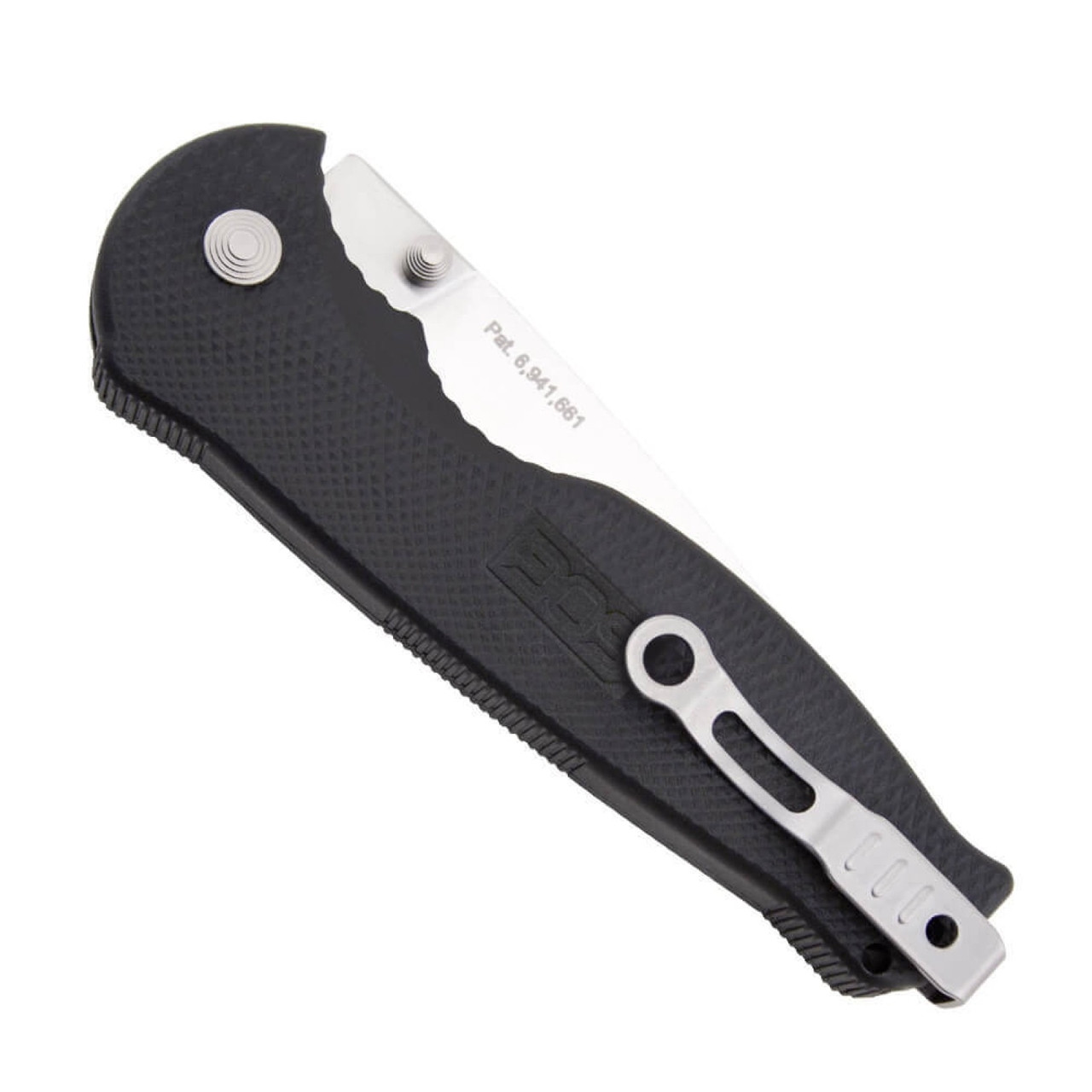 The Flash II is one of SOG's most popular models because of its wicked fast deployment and solid lock-up. The Flash family of knives showcases SOG Assisted Technology™, also known as S.A.T., and comes standard with SOG's patent pending pocket clip that ensures the lowest deep carry clearance available. For the safety-conscious, a slide safety has been integrated into the front handle scale and uses a red color for when the knife is ready for deployment. This model features black GRN (Glass-Reinforced Nylon) handle scales, a drop point style blade in a satin finish and the deep carry reversible pocket clip is designed for tip up carry only but is eligible for a left- or right-hand carry option.

The Flash II is currently in stock at BladeOps, but the quantities are moving quickly. To get your hands on one of these knives, you are going to want to hurry. Click here right now to get yours today.