Today, we will be going over the Jungle Primitive fixed blade, which is one of their more extreme fixed blades.

The blade on this fixed blade has been made out of 8Cr13MoV steel. This is a Chinese based steel that is from the Cr line of steels. The top of the line is the 9Cr formula, with 8Cr shortly behind. 9Cr steel is better than AUS-8, but 8Cr is about even with AUS-8, maybe even a little behind it. 8Cr13MoV steel is going to get the job done. It is resistant to corrosion, but not extremely resistant to corrosion. It isn’t hard and it isn’t soft. Really, it sits right in the middle of the spectrum. The biggest advantage that it boasts is its cost. This is a fantastic budget steel. It will get the job done and it isn’t going to raise the cost of the overall knife. It also isn’t going to compare to the newer steels or the super steels that you might encounter. 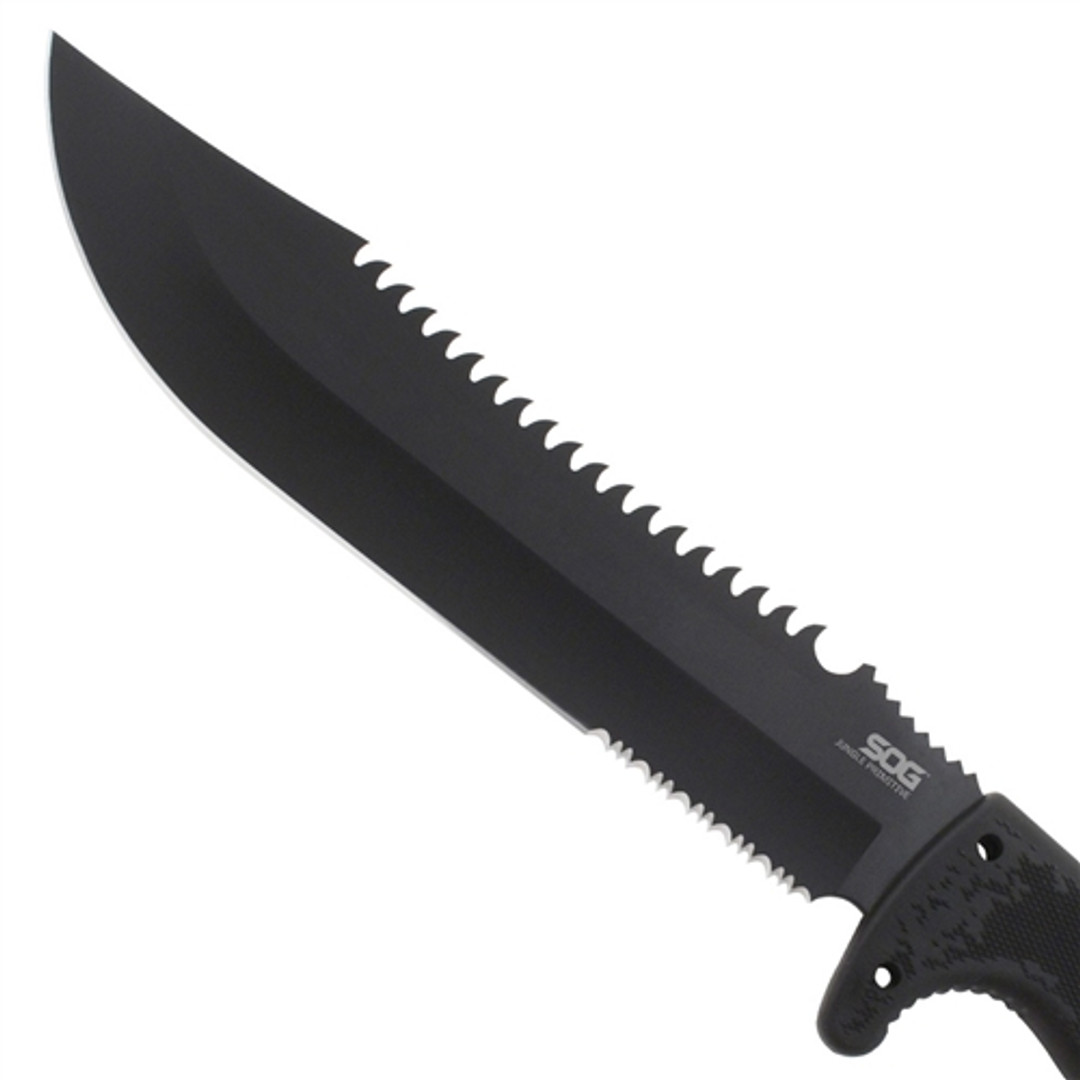 The only drawback to a coated blade is that coatings do scratch off after time or with use.

The blade is crazy extreme. For starters, the spine of the blade is not perfectly straight like many are—instead, it has been equipped with some seriously thick serrations. These serrations will be able to tear through nearly any material that you may come across. Branches, small trees, you name it, and it should be able to saw right through it. The blade does have a slight upsweep to it, which is going to enhance the surface area of the belly. The belly is large, which will help you slice with it. Really, you should be able to slice right through almost anything that comes your way. Even though the bulk of the belly does not have serrations, it is thick enough, large enough, and can be sharp enough to do some serious damage that a plain edge normally would not be able to do.

The bottom portion of the belly is serrated. While proportionally, this is a much smaller area, it still is a lot of length, because of just how large the knife really is. This section of serrations will also help work as more of a saw.

The blade is extreme, one that you aren’t going to really see in other places. The blade truly is equipped to take on nearly anything that happens to come your way.

The handle of the beast that is the Jungle Primitive is made out of black Kraton. SOG describes this material by saying, “Kraton is a synthetic replacement to rubber. It offers many of the same properties that natural rubber offers, such as flexibility, high traction, and sealing abilities, but with increased heat resistance, weathering, and chemicals. Typically, it is over-molded on the knife handle to provide added grip and comes in various degrees of hardness.”

This all means that it is going to offer you superior grip. In almost any environment, you are not going to have to worry about slipping. In fact, the Kraton has been roughly textured to add in an even more secure grip. When it comes to you wielding this knife, you are going to desperately need a solid grip. This thing is a monster, so the Kraton is the perfect option for it. Even if you are in a wet or humid environment, you won’t feel like you have any less of a solid grip on this thing.

The handle is just as extreme as the blade is. The spine of the handle is straight form the blade to the butt. The belly of the handle is where things are shaken up though. For starters, there is a massive finger guard. This is obviously needed because the blade would do some serious damage if you were to slip. This finger guard is bigger than any that I have ever seen, so it will do its job. The lower end of the finger guard is finished with jimping, which will give you a little bit more texture and a little bit of a better grip. The belly does bulge out, which will help this fit comfortably in your hand. Then, the butt curves out and up, mimicking the finger guard. This means that you hand can sit securely “inside” of the finger guard and the butt, further enhancing your hold on it. The butt is squared off and has been finished with some smaller spikes.

This is a massive fixed blade, which means that there is no mechanism on the knife. The handle and the blade are connected with no hinge. To cover the blade, you put it in a sheath, instead of folding it into the handle. This does mean that the blade can be longer and thicker than any folding knife, because the blade does not have to fit inside of the handle. Trust me, SOG really took advantage of this and the blade is longer and thicker than any pocketknife you will ever see.

Some benefits of a fixed blade are that they are easier to care for. This is because the blade is thicker, which means that it is going to be less likely to break. Really, if this blade snapped, I would be shocked. It is crazy strong. Also, all you have to do is wipe down the blade and handle and it is clean. You don’t have to worry about the innards getting junked up because there isn’t access to the innards. A fixed blade also makes a superior outdoors knife because it can do a lot more than just cut. It is going to be strong enough to be used as a general utility tool in the field. You can easily cut, saw, hammer, dig, and even pry with this knife. If you have the Jungle Primitive with you, you never need to be afraid that you won’t be able to take on what is coming your way.

The sheath that accompanies this terrifying knife is a black ballistic nylon with hook and loop attachment style. The nylon sheath is one of the more commonly used knife sheath materials. They are often compared to leather, because they are very common and have been around for longer periods of time. Just like leather, nylon sheaths are known for being tough as well as strong. However, nylon does take the lead because they are resistant to rot and mildew as well as not being as vulnerable to water as leather sheaths are. As we all know, leather’s biggest enemy is the sheath or the water. Next, nylon sheaths are not easily scuffed or torn because of how durable the material really is. 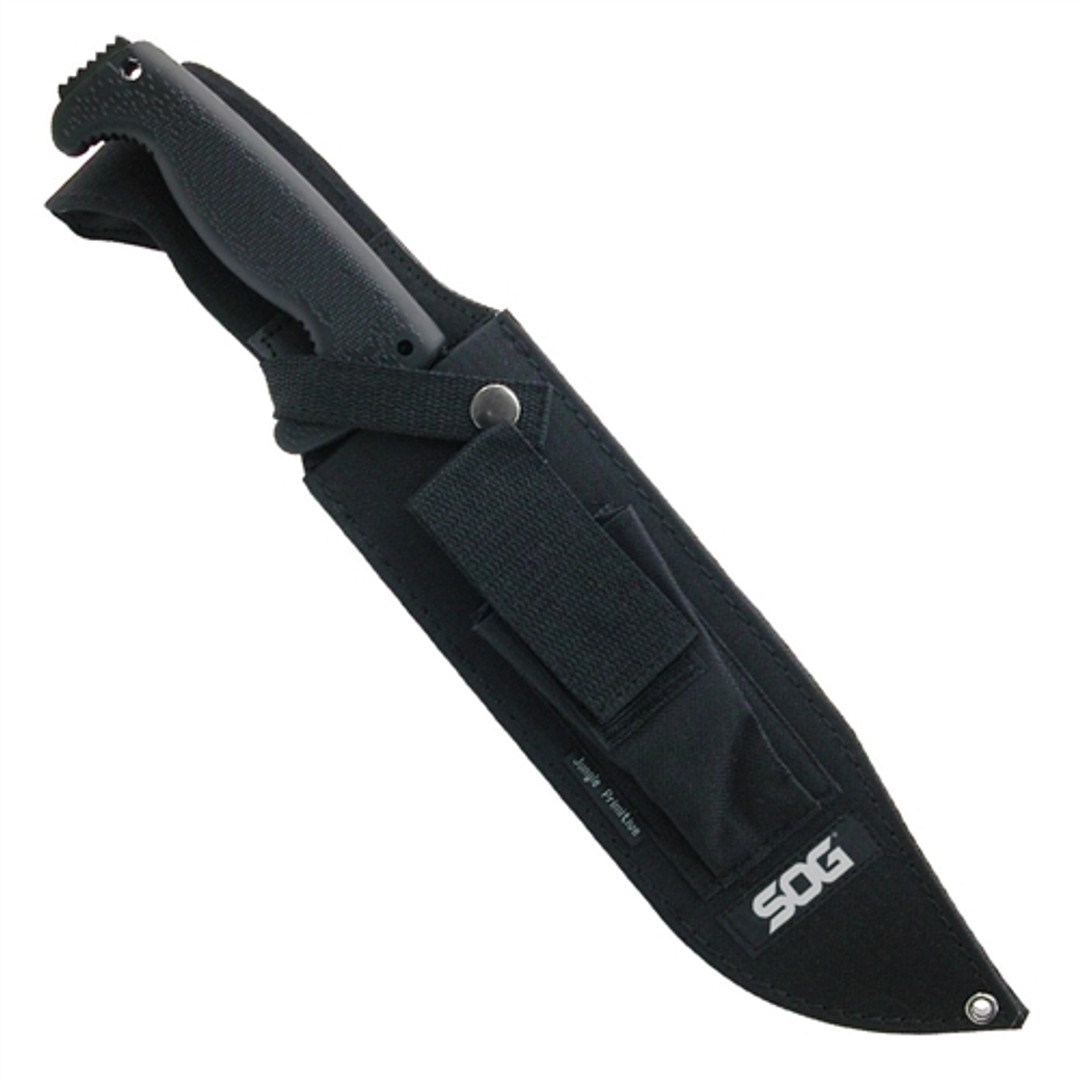 Of course, the sheath material is going to have its disadvantages. For example, nylon sheaths are not going to last as long as leather sheaths are. Plus, the longer you have a leather sheath, the better your knife is going to fit in it. When it comes to nylon, it is almost the exact opposite. Nylon sheaths get stretched out over time, which means that while the sheath will continue to work, it is not going to give your knife a snug or secure hold. In some cases, the sheath will get so stretched out that it is much safer to just go out and buy a new sheath

The blade has a blade thickness of 0.15 inches thick. This is a crazy thick blade, really, you aren’t going to find many others like this. However, the most stunning part of the Jungle Primitive is that the overall length of the knife measures in at a whopping 15.3 inches long. That’s over a foot! This thing is a beast. It is thick, strong, and durable, so you will really be equipped to take on nearly anything.

The SOG Jungle Primitive fixed blade knife is for the primitive in you. This knife is built with a durable and comfortable molded Kraton handle that features the SOG trademark Digi-Grip for maximum gripping power for when you need it. The Jungle Primitive knife is hard to categorize because it can be utilized as a small machete, limb saw or even a hammer and also includes a ballistic nylon sheath with utility pouch.

Really, with the Jungle Primitive, you can’t go wrong. You will be equipped for nearly anything that comes your way. That being said, the quantities are going quickly at BladeOps. To secure yours today, click here.