A second "maritime" version of the Bowie (S2) was made utilizing a black micarta handle and stainless steel blade known as the Trident.It was decorated with the US Navy SEAL emblem as opposed to the Special Forces Crest found on the Bowie. The original S1 and S2 classic bowies were manufactured for SOG by Ichiro Hattori of Seki Japan until 2006. The other models were manufactured by Kinryu Corp. also of Seki until 2007.

SOG says, “Forged out of tradition, hardened in the field, honed for you. So whether you're protecting others or leading an epic hunting expedition, tackling one of life's everyday challenges or facing your most extreme conditions yet, lead the way with SOG.”

Today we will be discussing the Large Kiku fixed blade.

When SOG talks about their collaboration with Kiku Matsuda, the designer, they say, “Building upon SOG’s long tradition of working with and honoring Japanese knife makers, SOG partnered with Kiku Matsuda, one of the foremost tactical knife designers and blade grinders in Japan, to produce a line of knives. Together, Matsuda's decades of experience in blade grinding and making fixed blade knives and SOG’s production experience has created one of the most unique, striking, and functional blades available. Through this collaboration, Matsuda and SOG have won awards and continue to drive innovative and functional knife designs.”

The blade on the Large Kiku is made out of AUS 8 steel. This is an upper mid-range steel that is made in Japan. If you are looking to compare it to another type of steel, your best bet would be to 440B. However, AUS-8 is going to be slightly more corrosion resistant. It is also similar to 440C, except that it is a little bit softer than 440C. The extra softness does mean that you are going to have to sharpen the blade more often. This is because AUS-8 stainless steel does have less carbon than some of the higher ranked steels. The more carbon there is in a steel, the better it is going to be able to hold its edge. However, it also means that it is going to be much easier to sharpen when you do need to. It is also a breeze to get a razor-sharp edge on this steel. This steel is tough enough to get the job done. 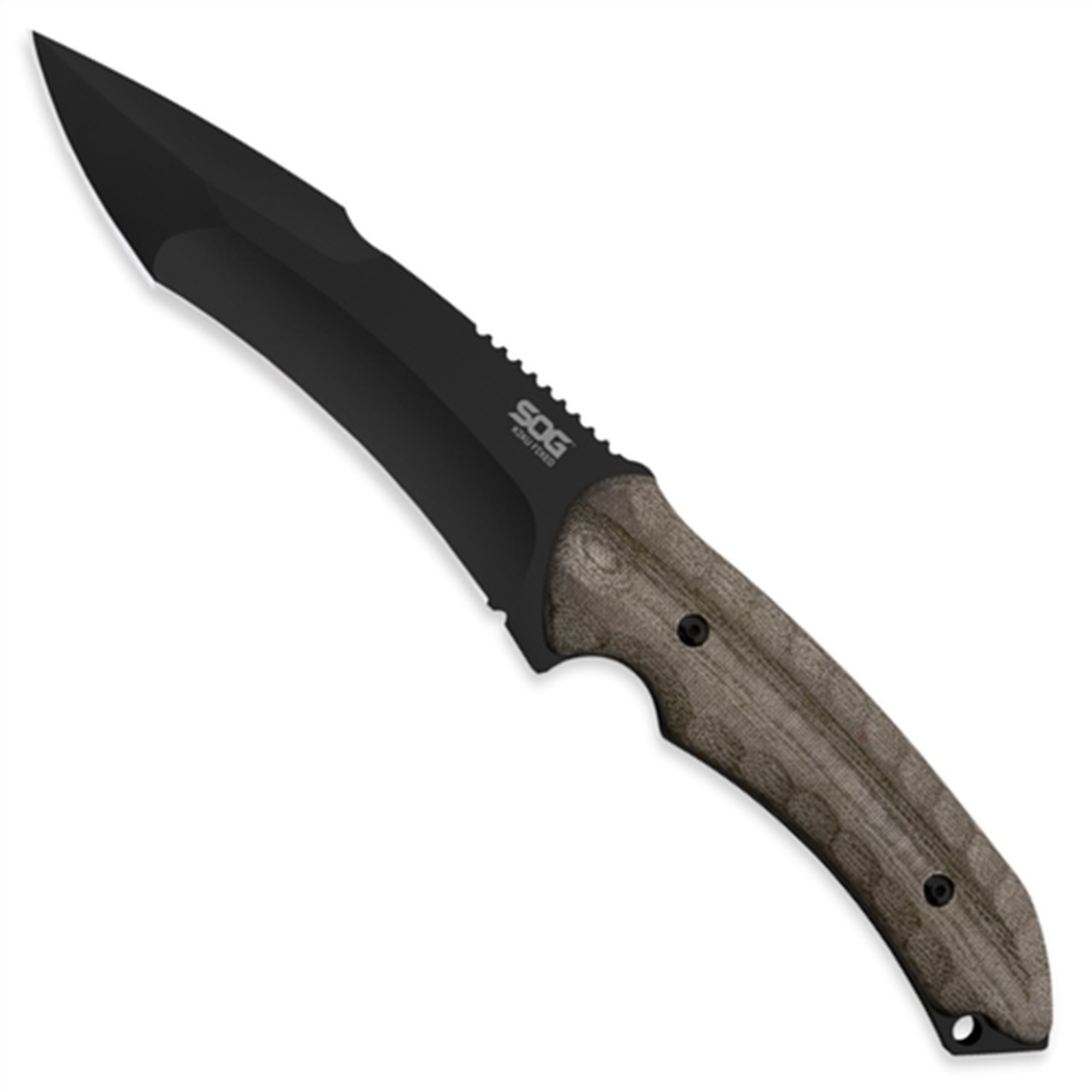 The blade has been finished with a hardcase black TiNi coating. This is an extremely hard, ceramic material that is often used to coat different products, such as blades. This coating is applied as a thin layer. It will then harden and protect cutting and sliding purposes as well as being sued for decorative purpose.

This TiNi coating is a matte black, which is going to look sleek while also cutting down on glares and reflections that happen your way. It is also going to increase the wear and corrosion resistance levels of the steel, because it is so hard, and it does protect it from any environmental factors. Many coatings are known to easily scratch off, but since this one is a harder coating, it shouldn’t scratch off easily.

In the 1980s, Cold Steel revamped the shape and popularized it. It is not the exact shape that you would find on the Japanese swords, but the concepts are the same. The shape of the tanto is built from a high point and a flat grind, which leads to a very strong point that makes it perfect for stabbing into had materials. It is because of the thick point of the tanto that is it able to stab into hard materials. This is because the excess metal is able to absorb the impact from repeated piercing that would cause most other knives to break.

The front edge of the tanto meets the spine of the knife at an angle, rather than a curve. Because of this, the tanto blade does not actually have a belly, which makes it a little harder to use for slicing.

The tanto on the Large Kiku is slightly different than one that you would typically see. The spine starts out going straight, but it does angle up very slightly before angling down. This looks as if the portion closer to the handle has been clipped out. The belly also has a very slight recurve to it. So, while you will not excel at slicing, you are going to have a few more capabilities than you would typically have with a tanto. The two changes are still going to provide you with everything you would normally get from a tanto, with a little extra added in

The handle has been made out of green micarta. This material is created when thin layers of material are soaked in a phenolic resin and then set. This process creates a material that is strong, lightweight (which is crucial for a knife that you are going to be carrying with you into the field), and even looks classy. It is able to look classier than most other knife handle materials because it is the material that shows through, instead of a plastic-y looking material. This material is also durable and tough, which is exactly what you will need out of a fixed blade.

While micarta does have plenty of great aspects, it does have a few drawbacks. The absolute biggest one is that when the process is first finished, it doesn’t have any surface texture. This means that a lot of time and hand labor is going to need to go into carving in texture on this handle, which is going to make it a more expensive product. One of the other bigger drawbacks that micarta has is that it does tend to be brittle. This does mean that if it is subjected to hard or sharp impacts, it may begin to crack or break apart.

The handle is definitely on the wider side, but not uncomfortably so. The spine of it curves toward the butt, which is slightly tapered. There is a large lanyard hole that is going to be large enough to fit nearly any lanyard that you want in it. There is also a finger groove near where the blade ends, and the handle begins.

This is a massive fixed blade, which does actually mean that there is not going to be a mechanism in it. This makes it studier, more reliable, and tougher. Plus, because of how massive it is, it is going to be able to take on things that smaller pocket knives wouldn’t even dream of. The fixed blade is also going to be easier to clean, because all you have to do is wipe down the blade and the handle. The blade should be dry before replacing it in the sheath.

The sheath on this knife is made out of nylon. The nylon sheath is one of the more commonly used knife sheath materials. They are often compared to leather, because they are very common and have been around for longer periods of time. Just like leather, nylon sheaths are known for being tough as well as strong. However, nylon does take the lead because they are resistant to rot and mildew as well as not being as vulnerable to water as leather sheaths are. As we all know, leather’s biggest enemy is the sheath or the water. Next, nylon sheaths are not easily scuffed or torn because of how durable the material really is.

Of course, the sheath material is going to have its disadvantages. For example, nylon sheaths are not going to last as long as leather sheaths are. Plus, the longer you have a leather sheath, the better your knife is going to fit in it. When it comes to nylon, it is almost the exact opposite. Nylon sheaths get stretched out over time, which means that while the sheath will continue to work, it is not going to give your knife a snug or secure hold. In some cases, the sheath will get so stretched out that it is much safer to just go out and buy a new sheath.

The blade measures in at 5.6 inches long with the overall length of the knife measuring in at 10.76 inches long. This is a whopping knife that is going to be able to take on nearly any task. It also weighs in at 11.2 ounces, which is huge.

The SOG Large Kiku Fixed Blade Knife features a modified tanto AUS 8 blade with a hardcase black TiNi finish. Designed by Kiku Matsuda--one of the leading tactical knife designers in Japan, this SOG knife is certain to turn heads. Linen Micarta handle scales with ridges along the edge provide an extremely solid grip. The blade features a hollow ground main bevel and a flat ground tip which gives it maximum strength as well as a fantastic look. This knife is built for years of reliable service.

This SOG knife is currently in stock at BladeOps. Click here to secure yours today.