Many of SOG's folding knives and multi-tools are made or assembled in the United States, with the higher priced folders being made by G. Sakai in Seki City. The fixed blade models that were originally made in Seki are now made in Taiwan. Some of SOG's lesser priced tools, such as the Fusion line are manufactured in Taiwan or China.

Today we will be discussing one of their fixed blades, the Mini Pentagon.

The blade has been carved out of AUS-8 stainless steel. This is an upper mid-range steel that is made in Japan. If you are looking to compare it to another type of steel, your best bet would be to 440B. However, AUS-8 is going to be slightly more corrosion resistant. It is also similar to 440C, except that it is a little bit softer than 440C. The extra softness does mean that you are going to have to sharpen the blade more often. This is because AUS-8 stainless steel does have less carbon than some of the higher ranked steels. The more carbon there is in a steel, the better it is going to be able to hold its edge. However, it also means that it is going to be much easier to sharpen when you do need to. It is also a breeze to get a razor-sharp edge on this steel. This steel is tough enough to get the job done. One of the main benefits of having the blade made out of AUS-8 steel is that it will keep the cost of the knife low, while still giving you enough quality so that you feel like you can depend on it.

The Mini Pentagon’s blade has been finished with a black powder coating. This is one of the most common coatings that you are going to come across. Like any coating, it is going to prolong the life of the blade. This is because there is a layer of material in between the steel and the environment. No matter what you encounter, it will not be able to come in contact with the actual steel, just the coating. This means that the blade is going to be more corrosion and wear resistant. The black coating also is going to cut down on glares and reflections, because it is a matte black coating.

The blade on this SOG has been carved into a dagger blade shape. This is a double-edge blade that is most often sued for stabbing. Often times, the dagger blade shape is used in self-defense, which makes perfect sense for why it would be the optimal blade shape for a tactical knife such as this one. The two edges of the blade rise and fall equally, which creates an axis that sits in the middle of the blade, which also means that the point is going to be directly center. The tip is fine and sharp, ideal for piercing.

That being said, because the tip is fine and sharp, and you will be piercing with it more often than not, you do need to be careful with it. The fine and sharp characteristics are going to make it a little bit less tough, so it may be prone to breaking when used on harder targets. 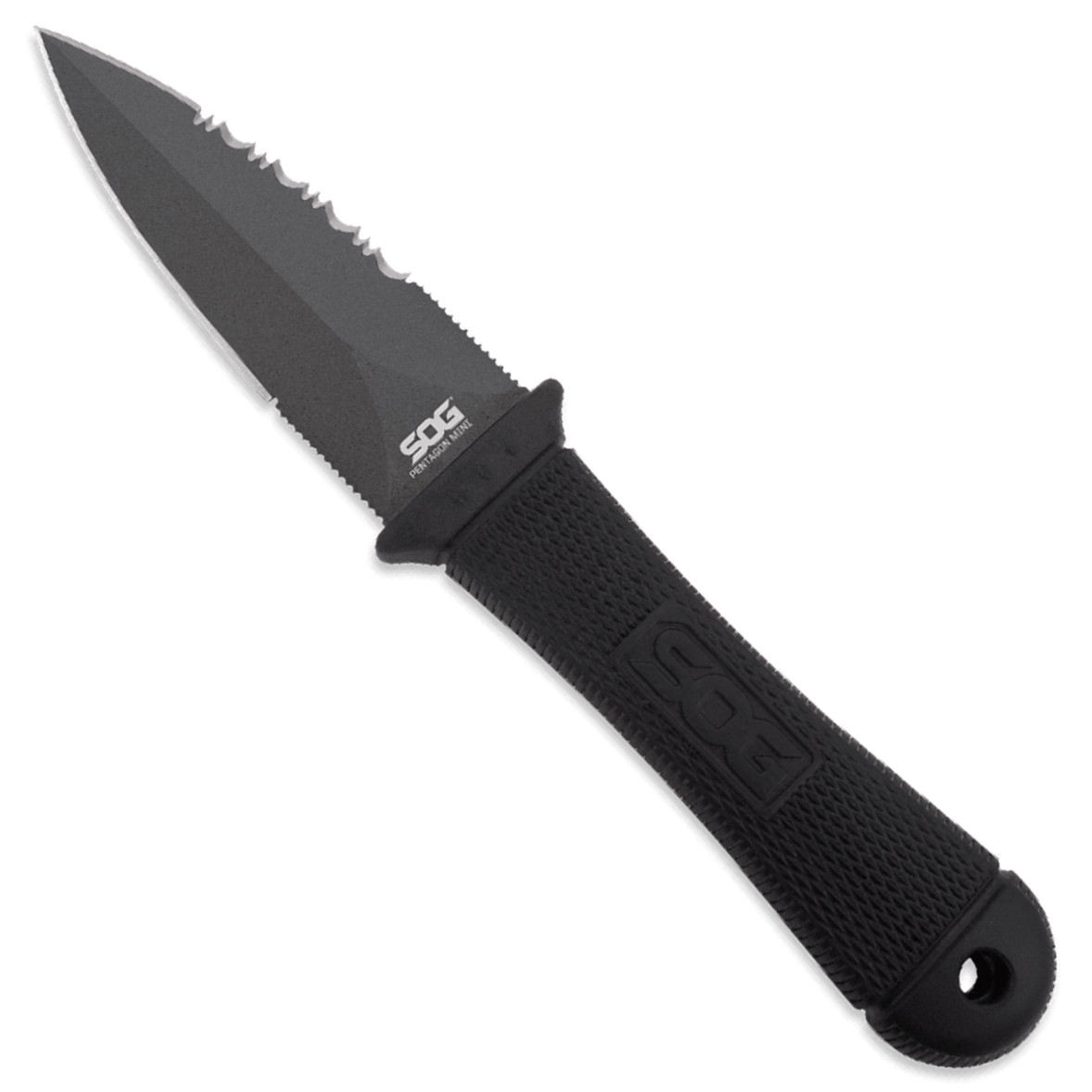 Both edges of the dagger blade have been sharpened. The bottom edge is simply a plain edge. Like any plain edge, you get the benefit of it being easier to sharpen, you can get a finer edge on it, and it will allow you to take on more things. While the dagger blade is not designed to slice, you may be able to get away with some minor slicing with this SOG.

The other side has been carved into a tough serrated edge. These rugged teeth are going to do a little bit more damage, as they can tear through some tougher materials.

The handle on this fixed blade is made out of Kraton. SOG describes this material by saying, “Kraton is a synthetic replacement to rubber. It offers many of the same properties that natural rubber offers, such as flexibility, high traction, and sealing abilities, but with increased heat resistance, weathering, and chemicals. Typically, it is over-molded on the knife handle to provide added grip and comes in various degrees of hardness.” 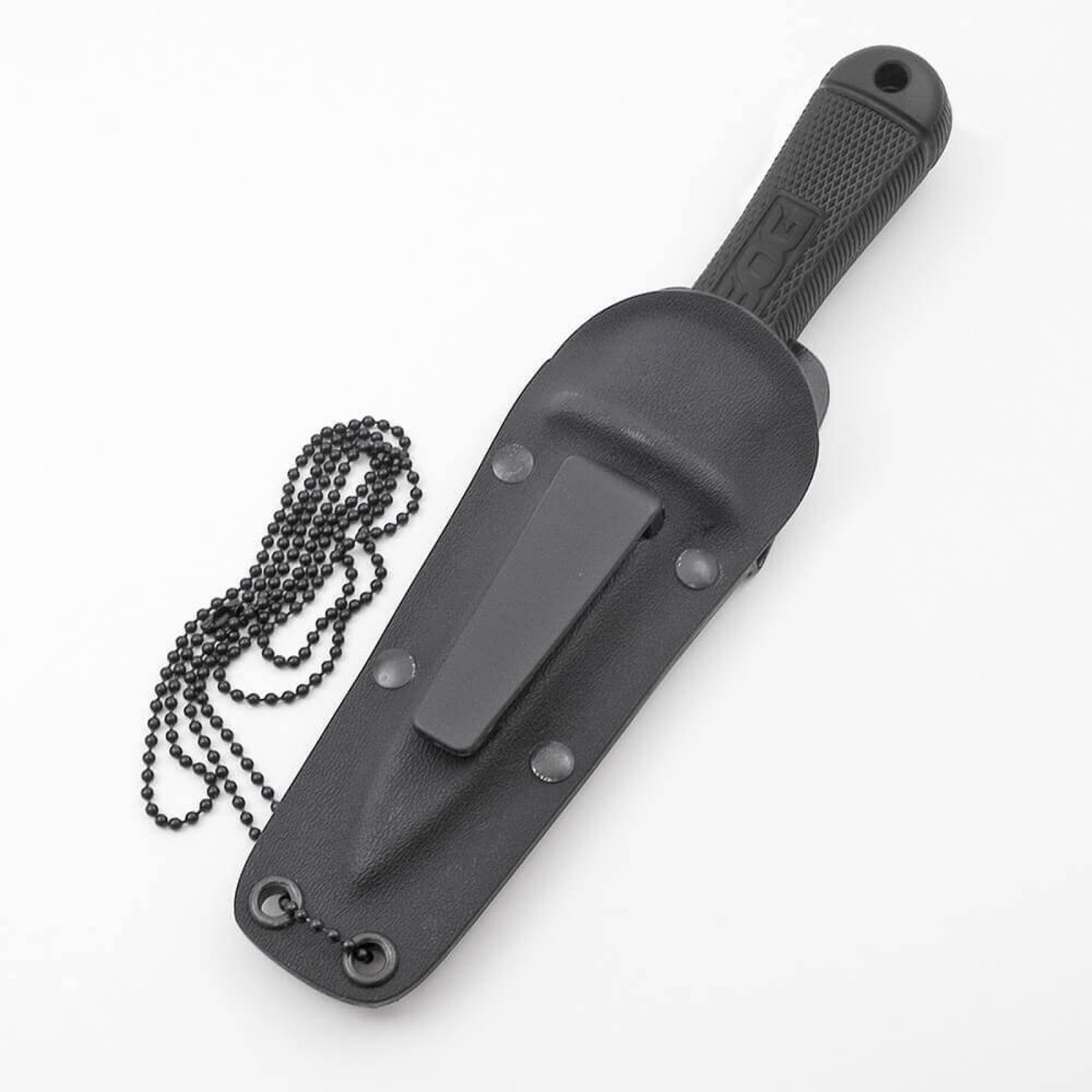 This all means that it is going to offer you superior grip. In almost any environment, you are not going to have to worry about slipping. In fact, the Kraton has been roughly textured to add in an even more secure grip.

The handle is built for safety and grip. There is a large piece of Kraton at the base of the blade that flares out, protecting your fingers from slipping. The handle does curve inward to give you a better hold on it. The butt is rounded with a large lanyard hole in the middle of it, which will fit nearly any lanyard you want.

This is a fixed blade, which is the perfect option for a tactical knife like this. For starts, the blade can be longer and thicker, which will help the you accomplish more heavy-duty tasks or feel a little bit safer in a self-defense situation.

Second, it is easiest to bring into play. There will be no more fumbling while you try to open your knife, because all you have to do is pull it out of its sheath. This is major with a tactical knife, because every single second counts. SOG recognizes this and has ensured that you will be able to slide the blade out at the moment that you need it.

The third advantage is that it is easy to maintain. All you really have to do is wipe it down and oil it occasionally. This is also ideal because if you are working in the field, you may not be able to truly clean this knife after each use. That won’t be a big deal though.

This does come with an accompanying black Kydex sheath. This is a modern material that is often used for sheaths and even holsters, because it is so durable. Kydex is waterproof and can stand up to a variety of different environments, including saltwater. This shows how durable and tough the material is, because many other materials begin to break down or rot in the presence of salt water.

Kydex also has a Rockwell hardness of 90, which means that not only is it scratch resistant, but it also won’t stretch or shrink over time. This is actually an advantage and a disadvantage. If the sheath doesn’t fit perfectly at the beginning, it never is going to.

This leads us to the first disadvantage of Kydex: it is a noisy material. If it does not fit perfectly, you may get the dreaded rattle. You also cannot withdraw or replace the Rocky Mountain Tread into the Kydex sheath without it making a lot of noise. This is a disadvantage if you are using this is the wild or on a hunting trip, because you don’t want to scare away potential game.

The biggest disadvantage is that the Kydex is going to dull your blade over time as you withdraw and replace it. This is because of how hard the sheath is. If you are hoping to prevent this, you can get an insert to protect against this problem.

Really, the biggest advantage of a Kydex sheath is that it is incredibly low maintenance. This comes in handy for this knife that has been designed as an all-around outdoors knife. This way, you don’t have to be worried about the quality of your sheath decreasing as you use it in the wild.

The blade on the Mini Pentagon measures in at 3.63 inches long with a blade thickness of 0.13 inches thick. The handle measures in at 4.25 inches long, which creates an overall length of 7.88 inches long. This is a standard size for a pocket knife, but because this is a fixed blade, it is on the smaller side. Hence the “Mini” in the name. The knife weighs in at 3.3 ounces, which is fairly light. Then, the Kydex sheath weighs in at 2.1 ounces. All in all, the overall weight of the knife and sheath combined is still light enough that you aren’t going to feel weighed down when you are using this knife or carrying it with you.

The SOG Mini Pentagon is the perfect back-up fixed blade that inconspicuously can be carried in a boot or vest. Each Mini Pentagon sports twin thumb notches on the blade while the aggressively checkered and flared handles allow for a confident grip and accurate control. This model features black Kraton handle scales, a dagger style blade, that is partly serrated on one side and plain on the other, in a black powder coating and the black kydex sheath includes a pocket clip.

The Mini Pentagon is currently in stock at BladeOps, but the quantities are going quickly. Act now to get yours today.