Today, we will be discussing the SOG Quake assisted folding knife.

The blade on this knife is made out of VG-10 steel. This steel is pretty similar to the popular 154CM as well as the less popular ATS-34 steel. Although, VG-10 steel does have more chromium, which works for enhanced corrosion resistance. This steel also contains more vanadium than the other two steels which does make it a little bit tougher than those other steels. This steel originated from Japan and has been introduced into the American market slowly. This steel is a pretty hard steel that has good toughness and with the correct tools, you can get your blade incredibly sharp. This steel has been hardened to a RC of 58-60.

The blade on the Quake has been sand blasted finish. This is going to create an even, matte grey finish. That in itself does offer some benefits. For starters, it is going to cut down on most glares and reflections. But it also has a more even and grey finish than you would typically see on blades. This gives it a unique look without increasing the cost too much. However, this finish does produce micro abrasions in the steel, which are going to increase the corrosion resistance of it. Luckily, VG-10 steel starts out with very high levels of corrosion resistance, so it won’t be too bad. Just not what it originally was. 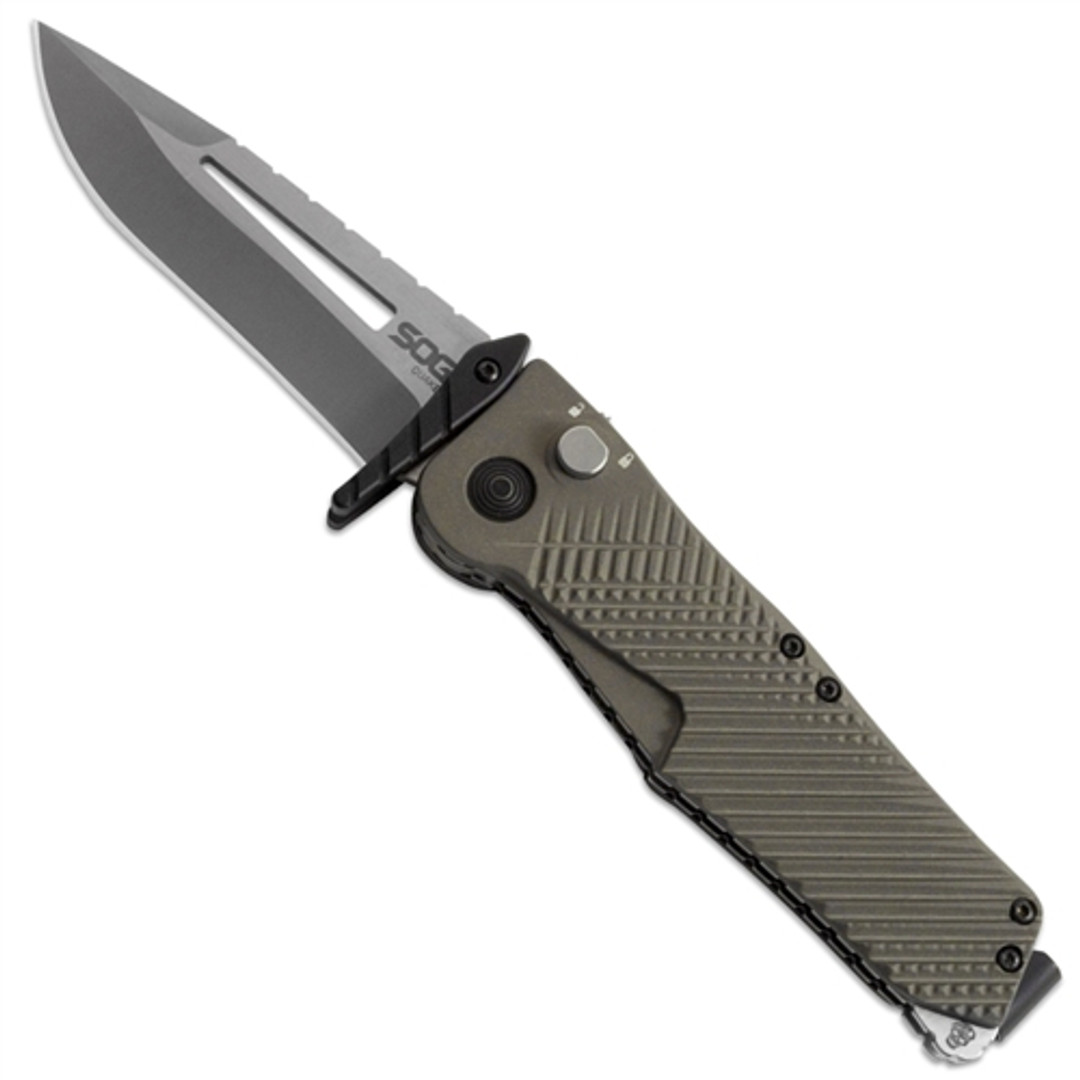 The blade has been carved into a clip point blade shape. The clip point is a great all-purpose blade and is also one of the most popular blade shapes that is in use today. You are most likely going to find more clip point blades on Bowie knives, although they are often used on plenty of fixed blades and pocketknives such as the Quake. The shape of the clip point is unique, with the back of the knife running straight from the handle before it stops about halfway up the knife. At this point, it turns and continues to the point of the blade. This portion looks as if it got clipped out of the blade and is referred to (appropriately) as the clip. This portion of the knife is where the blade shape got its name from. Because of the clip, the point that the shape has is lowered, which means that the user is going to have more control when they are using this knife. The clip point is designed to excel at piercing. This is because the tip is controllable, sharp, and thinner at the spine, which means that there is less drag during insertion as well as faster withdrawal. One of the other reasons that clip points are so popular is because they sport a very large belly, which makes slicing easy. Of course, just like every knife blade shape, the clip point does have one major disadvantage. Because of its narrow tip, the blade does have a tendency to be weaker and can break pretty easily, especially when used on harder targets. This is the portion of the knife that differentiates itself from the drop point. However, the clip point blade is going to prepare you to really take on almost anything that comes your way.

The handle on the Quake is made out of aluminum. Aluminum is a low-density metal that is often used in knife making. Because it is a softer metal, it is mostly used for just the handles, not the blade. A fun fact about aluminum is that it is the most abundant metal that can be found in earth’s crust. This material is used for its hardness and durability. Although it is a low-density metal, it does give a nice, hefty feel to the knife without actually weighing the knife down. This is a major benefit because you will have the heft that makes you confident in taking on your tasks, but you won’t feel like the knife is a brick.

When an aluminum handle is textured correctly, it is going to give you a secure grip that is not only secure, but also comfortable enough to use for long periods of time. The overall pros to an aluminum handle are that it is strong, light, durable, and is resistant to corrosion.

Unfortunately, like most materials, aluminum does have its drawbacks. For starters, it has very high conductive properties. This means that if you were planning on using this knife in colder environments or months, it can become painfully cold to hold. Aluminum can also be slippery, and it is susceptible to scratches and dings.

The knife has been anodized, which is a protective oxide layer which is applied in an electrolytic process in which the metal forms the anode. This process makes the knife tougher, more durable, and less prone to scratches. The handle has been anodized a Flat Dark Earth color. 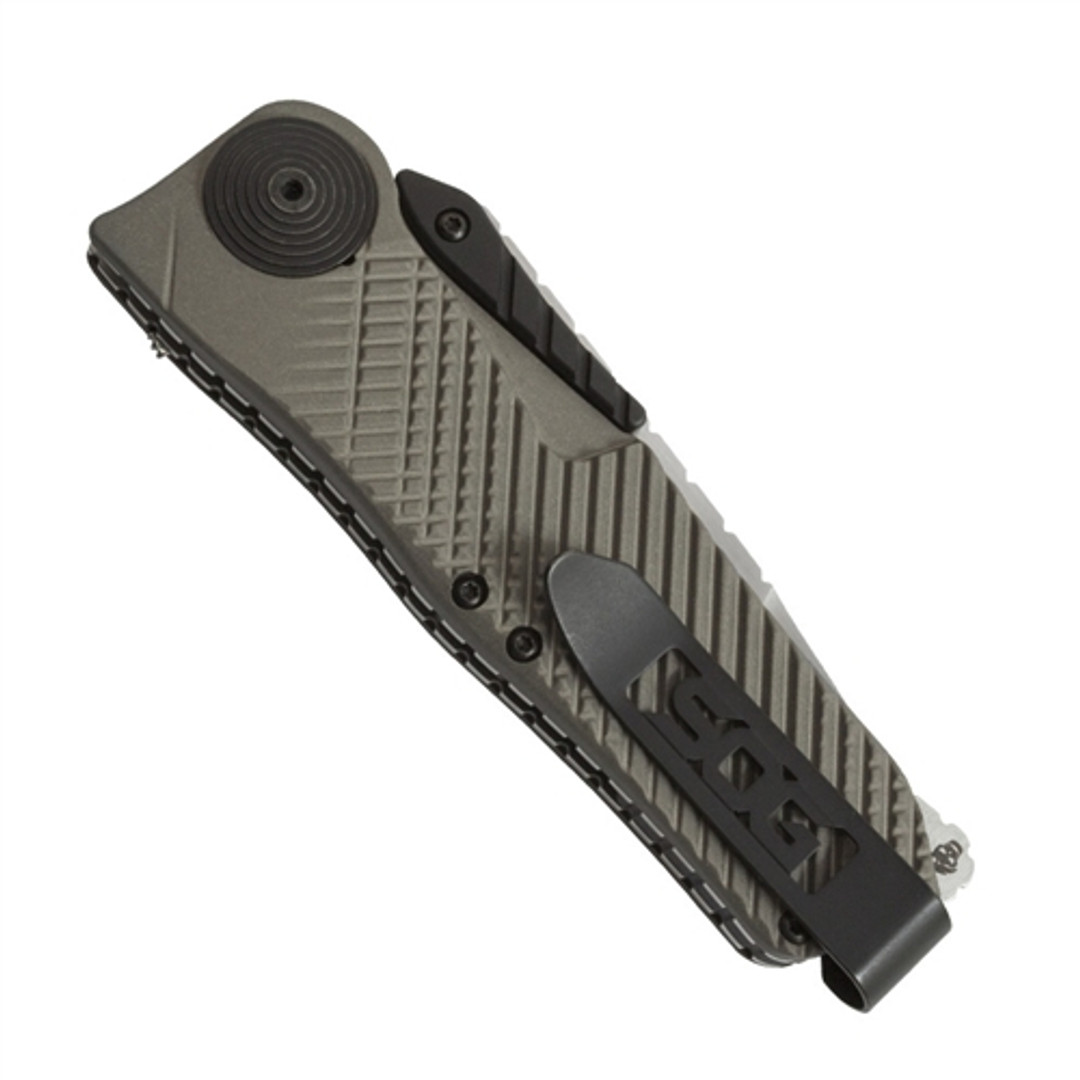 The handle has plenty of texture to give you the grip that you need when you are relying on this knife. The belly does have a very slight finger guard. There is also an indent which adds texture and makes the ergonomics a little bit more comfortable. The butt is squared off.

The pocket clip is a bayonet mounted reversible clip that does give you the ability to carry this knife very low and very discreetly. The reversible clip is also going to be more ambidextrous friendly, which is always an advantage.

This is an assisted folding knife which is a type of folding knife that uses an internal mechanism to finish the opening of the blade after the user has partially opened it. To help the user open this knife, SOG has equipped the knife with a thumb hole. This is an opening in the blade that extends in the middle of the upper portion of the blade. This replaces the nail nick that is more common on knives as well as the thumb stud, which is the most common. The hole in the blade allows you to get a better grip on the knife so that you can really flip the knife open, where it will lock into place. Another advantage is that the hole does not stick out of the knife and get in the way.

This knife has been equipped with the SOG assisted technology. This is often referred to as the S.A.T. and works through the balance of opposing high tension coil springs. As you initiate the opening action, the force propelling your blade open becomes greater than the force keeping it closed. The result is a blade that springs open instantly once it is engaged, seemingly on its own.

Spring assisted knives have plenty of advantages. For example, they open almost as smoothly as a fully automatic knife, or a switchblade, but because they are not, they do not fall under the strict laws that switchblades do. Spring assisted knives can also be brought into play more quickly than a purely manual knife, because you do not have to struggle as much with the opening of the knife. That being said, they are going to be harder to maintain, because unlike a purely manual knife, you will now have a spring that you have to take care of.

New from SOG is the large-format SAT-assisted opening knife called the Quake. It is sizeable, simple and fast to open. It comes out quickly because it uses the SOG Assisted Technology (S.A.T.), which employs a powerful piston lock that is easily released with a sliding button. And the Quake is big enough for most tasks. SOG designed it with a bayonet mounted reversible clip that gives you the ability to carry this knife extremely low and discreetly. The handle is ergonomically contoured and the straight edge, sanded blasted blade is large with a locking safety. It features a cross guard that not only protects the hand when open, but also actuates the opening of the blade.

This knife is currently available at BladeOps. Order yours today by clicking here.