Today we will be discussing the SOG S37-L Seal Team fixed blade knife.

The blade on the S37-K is made out of AUS 8 steel. This is an upper mid-range steel that is made in Japan. If you are looking to compare it to another type of steel, your best bet would be to 440B. However, AUS-8 is going to be slightly more corrosion resistant. It is also similar to 440C, except that it is a little bit softer than 440C. The extra softness does mean that you are going to have to sharpen the blade more often. This is because AUS-8 stainless steel does have less carbon than some of the higher ranked steels. The more carbon there is in a steel, the better it is going to be able to hold its edge. However, it also means that it is going to be much easier to sharpen when you do need to. It is also a breeze to get a razor-sharp edge on this steel. This steel is tough enough to get the job done.

The blade has been finished with a black powder coat. This is one of the most common coatings that you are going to come across. Like any coating, it is going to prolong the life of the blade. This is because there is a layer of material in between the steel and the environment. No matter what you encounter, it will not be able to come in contact with the actual steel, just the coating. This means that the blade is going to be more corrosion and wear resistant. The black coating also is going to cut down on glares and reflections, because it is a matte black coating.

The blade has been carved into a clip point blade. The clip point blade is a great all-purpose knife. This is also one of the most popular blade shapes that is in use today. The shape is formed by having the spine of the knife run straight form the handle before it stops about halfway up the knife. At this point, it turns and continues to the point of the knife. This area looks as if it has been cut out and is known as the clip, which is where the knife shape got its name from. The clip can be straight or curved, but on the S37-L SEAL Team, it is curved. 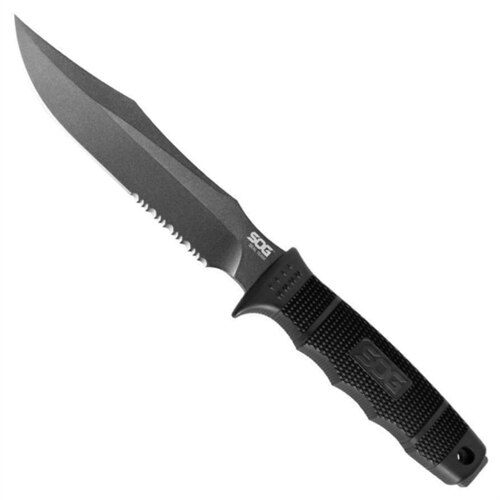 Because of the clip, the point is lowered, which gives the knife more control when you are trying to use it. Plus, because the tip is controllable, sharp, and thinner at the spine, a clip point is going to excel at stabbing. This is because it is going to have less drag during insertion and faster withdrawal. Clip point knives also feature a large belly area that is perfect for slicing, which is one of the reasons that the knife is so versatile. There is one major disadvantage though: because the point on the clip point is relatively narrow, it does have a tendency to be weak and can break fairly easily. Of course, by choosing this SOG, with its clip point, you are going to be prepared in almost any situation.

The blade has been sharpened with a combo edge. On the S37-K, ¾ of the blade are plain edge. This is the upper portion, closer to the tip. With this section, you will be able to slice more easily. This portion will also equip you to take on a wider variety of tasks. The serration section is the portion of the bale closest to the handle. With the serrations, you will more easily be able to saw through thicker materials. The benefit of a combo edge is that you do get the best of both worlds. It does allow you to perform more tasks and be prepared for a wider range. The biggest complaint against a combo edge is that the blade is not large enough that you can effectively utilize either. However, with the S37-K, the blade is absolutely massive. That won’t be an issue whatsoever.

The handle is made out of GRN. This is the same material as FRN and is the common brand of Zytel. This is a thermoplastic material that is very strong, resistant to both bending and abrasion, and is practically indestructible. Plus, this material is incredibly cheap because it can be injection molded.

One of the key characteristics about this material is that they nylon fibers are arranged haphazardly throughout the handle which means that it is going to be strong in all directions. This is different from G-10, Carbon Fiber, and Micarta, which all have their fiberglass strands aligned in a single direction. The handle on this knife is black.

The GRN is going to be strong, tough, inexpensive, and require zero maintenance. This means that it is going to be a very quality knife handle material that is going to get the job done on a tough knife such as this one.

The handle is designed to give you a great grip. It is roughly textured and has finger grooves going down the length of the belly. There is a large lanyard hole near the butt.

This is a fixed blade knife. It will be tough, strong, and durable. With this knife, you shouldn’t’ have any problems taking on whatever it is that comes your way.

The sheath that comes with this is made out of black kydex. It also supports a belt clip attachment and offers a snap-button security closure as well as a variety of carry positions. This is a modern material that is often used for sheaths and even holsters, because it is so durable. Kydex is waterproof and can stand up to a variety of different environments, including saltwater. This shows how durable and tough the material is, because many other materials begin to break down or rot in the presence of saltwater.

Kydex also has a Rockwell hardness of 90, which means that not only is it scratch resistant, but it also won’t stretch or shrink over time. This is actually an advantage and a disadvantage. If the sheath doesn’t fit perfectly at the beginning, it never is going to.

This leads us to the first disadvantage of Kydex: it is a noisy material. If it does not fit perfectly, you may get the dreaded rattle. You also cannot withdraw or replace the Rocky Mountain Tread into the Kydex sheath without it making a lot of noise. This is a disadvantage if you are using this is the wild or on a hunting trip, because you don’t want to scare away potential game.

The biggest disadvantage is that the Kydex is going to dull your blade over time as you withdraw and replace it. This is because of how hard the sheath is. If you are hoping to prevent this, you can get an insert to protect against this problem.

Really, the biggest advantage of a Kydex sheath is that it is incredibly low maintenance. This comes in handy for this knife that has been designed as an all-around outdoors knife. This way, you don’t have to be worried about the quality of your sheath decreasing as you use it in the wild.

The blade on this knife measures in at 7 inches long with a blade thickness of 0.24 incehs. The handle on the Seal Team measures in at 5.3 inches long. This creates an overall length of 12.3 incehs long, which is massive. Of course, with that much length, you are going to have a lot more weight. This SOG weighs in at 10.3 ounces, with the nylon sheath weighing in at 2.6 ounces.

In the knife industry, as well as any industry, there are originators and there are duplicators. The SOG SEAL Team fixed blade holds true as one of the most iconic and classic fixed blades models when SOG first began making fixed blades in the mid 80's. Offered with 2 different sheath options, each product showcases a full tang design in addition to a comfortable knurling pattern throughout the lightweight handle scale for comfort and security. Couple that with the fact that each blade coating provides low-reflection and increased corrosion resistance for a true tactical advantage. This larger model, the S37-K, features black GRN (Glass Reinforced Nylon) handles, a clip point style blade in a black powder coated finish and the black kydex sheath supports a belt clip attachment and offers a snap-button security closure as well as a variety of carry positions.

This is available at BladeOps. To secure yours, click here.