In late 1998, TOPS Knives was founded with a mission to create the highest-quality knives around. Their knives are tools, designed and built using the extensive knowledge and real-life experiences of many operators with backgrounds in military, law enforcement, outdoor professions, and martial arts. Specifically, they have worked with designers with backgrounds ranging from Navy Seals to Airborne Rangers, from martial arts instructors to survival experts, and from SWAT Team Members to Native American weapons experts. They have a designer from nearly every background that uses hard-core knives. Perhaps the best part, all TOPS fixed blades are manufactured and hand-finished at their facility in the heart of the Rocky Mountains, USA.

Their knives have been requested and deployed in “Hot Spots” all over the world. Numerous individuals who are or were field operators use or have used their knives and report top performance and reliability from times when their life depend on the tools, they had with them.

Their mission is to create the highest-quality, rugged, unique, overbuilt, and functional tools for service members and outdoorsmen of all kinds through their superior manufacturing, finishing processes, and genuine field operators’ testing.

They have a vision to provide their clients with tools they can trust completely to exceed their expectations every time. Their values include American integrity, quality, durability, performance, and consistency.

Today we will be talking about BladeOps’ new arrival, the TOPS Lioness Rockies edition fixed blade, which is a new arrival at BladeOps. 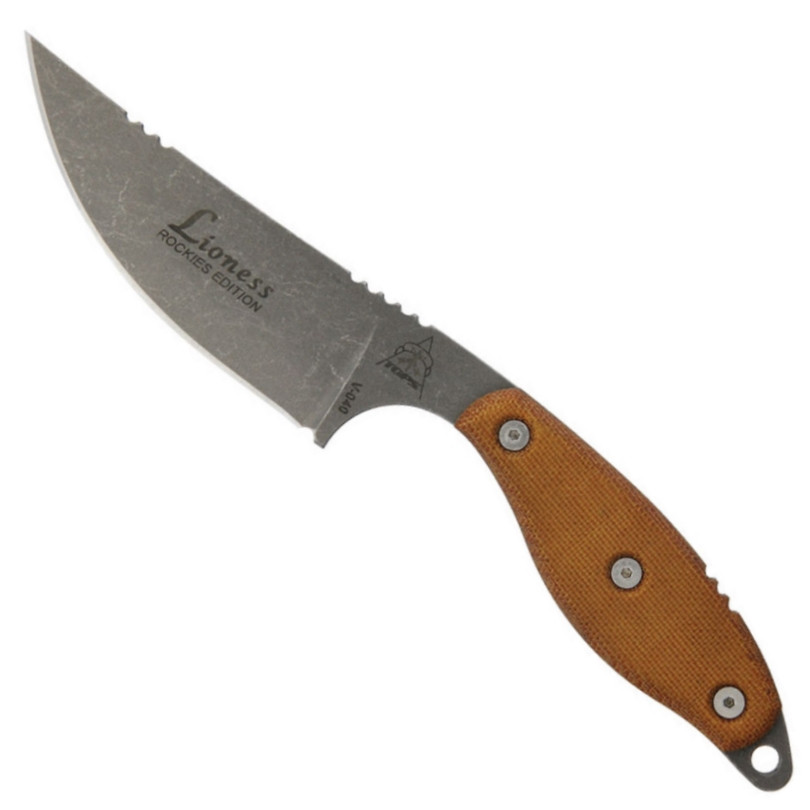 The blade is made out of 1095 carbon steel. The blade on this is made out of 1095 carbon steel. This is a basic from of carbon steel. The steel is most commonly used in knives, especially knives that are going to have to take a beating. The steel has a carbon content of .95% which does harden the steel and reduce the amount of wear that a blade will experience over time. However, this steel is also not as tough as other steels that you are going to come across because it doesn’t have as much manganese as it could. Manganese also makes a steel harder, which does make it a little bit more brittle. This means that 1095 carbon steel is not going to be brittle, which is one of the reasons that it can take such a hard beating.

This blade steel holds its edge for long periods of time and is also easy to sharpen. Unfortunately, this steel does tend to rust easily. Since this is a neck knife, you won’t be using it for every single little task. In fact, it is more of a self-defense knife more than anything. This means that it probably won’t rust because it won’t be used enough to rust. Of course, after each use, make sure that it is completely dry before placing it back in the sheath.

The blade has been finished with a tumbled blade, which is a stonewash finish. This finish is created when the blade is tumbled around with small ceramic pebbles, which roughs up the texture of the steel. The steel is then removed, smoothed out, and polished. This does mean that you will have a smooth metal, but it also means that you are going to see some of that texture in the appearance of this blade. This texture is one of the man reasons that the stonewashed finish is as low-maintenance as it is: the textured appearance is going to hide the scratches and smudges that accumulate with time and use.

This is a darker stonewash, which is created when the blade undergoes and acid treatment that works to darken the blade before it is tumbled with the stones. This not only creates a darker appearance, but it also oxidizes the blade slightly, which is going to enhance the blade’s ability to resist rust. This is because it places a stable oxide barrier in between the steel and the environment. Also, the original look of the blade is going to be sustained for long-periods of time, which means that this is a great knife to take into the field with you, without worrying about all the time it is going to take to maintain it.

The blade is a trailing point style blade. This means that the spine of the knife extends mostly straight from the handle, but near the tip, it begins to swoop upward. This does mean that the tip is nowhere near lowered, which will cut down on some of your control of your cuts. The spine has two separate rows of jimping, which are going to serve as additional texture and give back some of the lost control.

The upsweep does serve a purpose though: it creates more surface area on the belly, which is going to give you more slicing capability. The belly on the trailing point shape is large, which is going to make any slicing job a total breeze.

The point on the trailing point is fine and sharp. This does mean that you are going to be able to pierce with this knife. That being said, because it is fine and sharp, you do have to be careful on which targets you use it on. The harder targets may cause the blade to snap.

The handle on the Lioness Rockies edition is made out of canvas micarta. This material is created when thin layers of canvas are soaked in a phenolic resin and then set. This process creates a material that is strong, lightweight (which is crucial for a knife that you are going to be carrying with you into the field), and even looks classy. It is able to look classier than most other knife handle materials because it is the canvas that shows through, instead of a plastic-y looking material. This material is also durable and tough, which is exactly what you will need out of a fixed blade.

While micarta does have plenty of great aspects, it does have a few drawbacks. The absolute biggest one is that when the process is first finished, it doesn’t have any surface texture. This means that a lot of time and hand labor is going to need to go into carving in texture on this handle, which is going to make it a more expensive product. One of the other bigger drawbacks that micarta has is that it does tend to be brittle. This means that if subjected to too hard or sharp of an impact, it may begin to break down and crack.

The handle on the Lioness is built for a solid grip. The spine of the black handle scales extends down toward the butt in a slow curve. In the middle of the curve, there is a short row of jimping, which is going to allow you to have better grip. The belly of the handle scales has a large bulge in it. This is going to fit nicely in your hand. It will create a comfortable grip. The butt of the handle has a large lanyard hole that would fit nearly any lanyard that you want it to.

This is a full-tang, fixed blade knife. The fact that it is a fixed blade means that it is going to be stronger, more durable, and more reliable to use. This means that the steel of the blade extends throughout the entire shape of the knife. Instead of a handle that is melded to it, it has handle scales that are screwed onto it. This has a variety of advantages. The first is that if the handle scales were to break, you would still have the entire knife to work with. You would not be stuck with just a blade, just a less-comfortable entire knife. The other major advantage is that there is not a weaker spot where the handle has been welded with the blade. This means that it is going to be more durable.

There are a variety of benefits to having a fixed blade knife. The first is that the blade has the ability to be longer and thicker. This is because it does not have to fit inside of the handle, like a folding knife does. This means that the blade is going to be more durable, stronger, and more reliable. The blade is going to be able to take on tougher tasks than the smaller blades of a folding knife would.

The next major advantage is that the blade and knife are going to be easier to clean and maintain than a folding knife. This is partly because there are no small moving parts, or even any parts on the inside, that can begin to break down or rust. This means that cleaning is going to be easier, because you don’t have to worry about cleaning the insides. All you really have to do to maintain the Lioness is to wipe down the blade and the handle. Occasionally, you will want to oil the blade as well. As always, make sure that the blade is clean and dry before you put it back in the Kydex sheath.

Also, the fixed blade is able to just be larger in general than a folding knife. This means that you will be able to take on those tougher tasks that folding knives cannot handle.

The sheath that is included with this knife is a Kydex sheath that comes in the color coyote tan, which does match the handle on this Lioness. This sheath additionally allows for the user to carry it any direction, because it has been equipped with a multi-positional rotating clip. This means that the user is going to be as comfortable as possible when carrying this knife.

Kydex is a thermoplastic acrylic-polyvinyl chloride material that is often used in sheaths and holsters. This is a much more modern material, which does carry its advantages. For starters, it’s waterproof. This material can be submerged in saltwater and still maintain its quality. Kydex is also scratch resistant, so you can take it with you on any adventure and not have to worry about the sheath becoming destroyed. It also won’t stretch or shrink over time—Kydex sheaths are crazy durable and will hold up very well when expose to different environments. Plus, they are super low maintenance and require very little attention.

But not any material is without its disadvantages. For starters, Kydex sheaths are very noisy and have a snapping sound when you are putting your blade back into the sheath. Some people have a satisfaction that comes with this sound, but others hate it, because the sound is going to draw attention to your and your massive knife. The biggest disadvantage about using a Kydex sheath is that after repeatedly withdrawing and replacing your knife in the sheath will end up dulling the blade’s edge.

The blade on this version of the Lioness measures in at 4.13 inches long with a blade thickness that measures in at 0.13 inches thick. The overall length of this fixed blade measures in at 7.63 inches long, which is slightly on the smaller end of the spectrum when it comes to fixed blades. This knife does weigh in at 3.7 ounces, which is a great weight. It is not too heavy, but it does have enough heft that you feel you can actually accomplish enough with it. Lastly, this TOPS knife was made in the United States of America, so you can feel proud each time that you use it.

Although the Lioness was designed with female users in mind, this compact fixed blade is easy to conceal on your persons' or on a pack while its large blade belly, combined with finger tread, assists with finer cutting tasks. The coyote tan kydex sheath additionally allows for the user to carry it any direction thanks to its multi-positional rotating clip and its standard carbon steel blade is ideal for high-impact cutting.