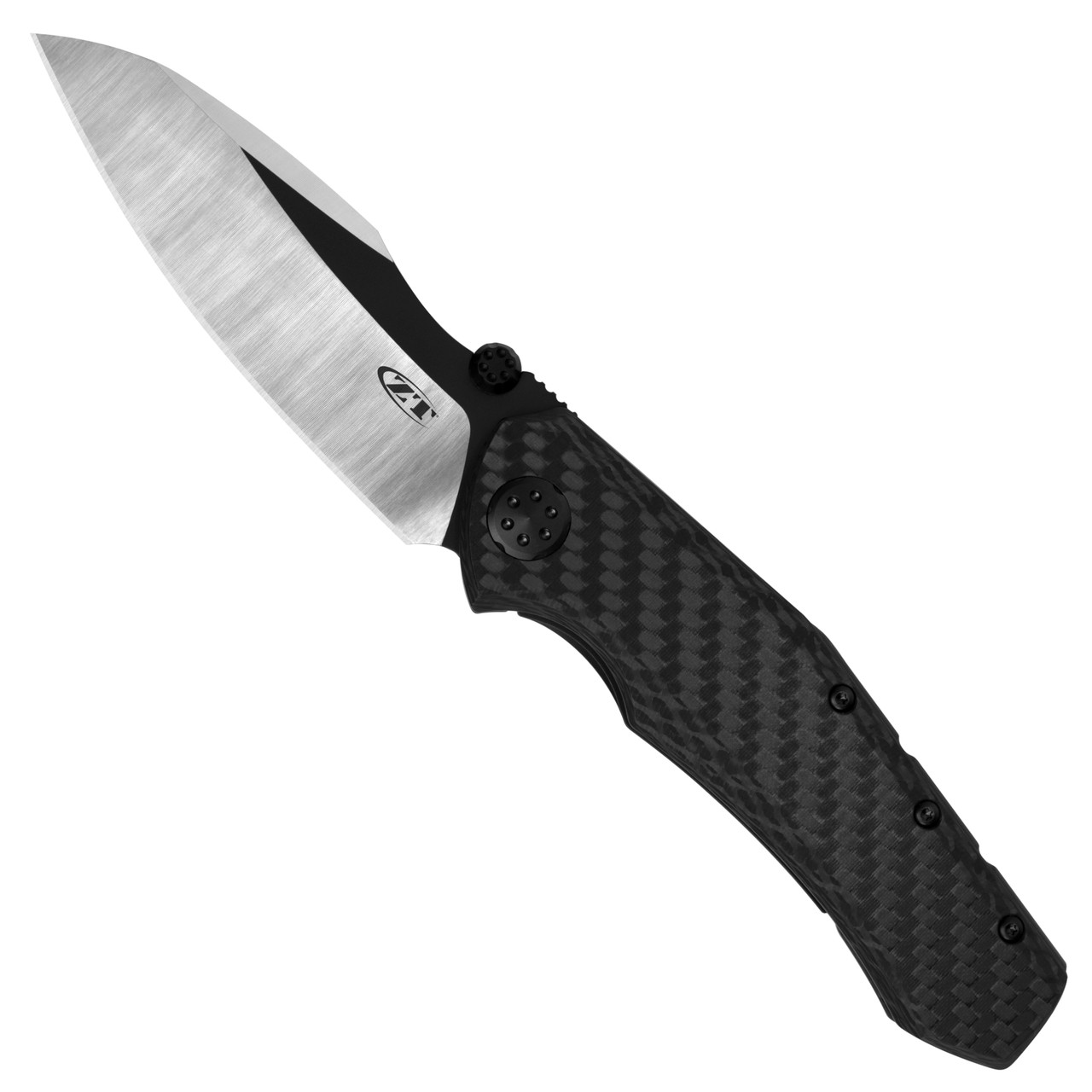 Zero Tolerance says, “ZERO TOLERANCE FOR ANYTHING LESS THAN THE BEST

We will continue to build the kind of premium-quality, professional knives that our customers can depend on every single day.”

Zero Tolerance is a brand of Kai USA Ltd. The ZT brand first made its appearance in 2006 when they saw a place in the market for a Made-in-USA line of hard-use knives that would meet the needs of professionals in the military and law enforcement, as well as other first responders, such as firefighters and emergency medical personnel.

The initial products were combat knives, but since that time, the line has expanded to include a variety of general use and premium knives. From larger and heavier outdoor knives to slimmer and lighter everyday carrying knives that are built to ZT's high-performance standards, ZT knives always provide knife owners with top-of-the-line quality.

ZT says that they are “proudly overbuilt.” Zero Tolerance Knives are manufactured of premium materials such as S30V, S35VN, or CTS-204P blade steel and G10, titanium, and carbon-fiber handle scales. Operation is conspicuously smooth and ZT fit and finish is second to none. Their customers have described ZTs as a “real beast” and—proudly—"overbuilt." All ZTs are built in their Tualatin, Oregon USA manufacturing facility by our most skilled workers.

ZT is also a brand of Kai USA Ltd. Kai USA Ltd., the makers of Zero Tolerance Knives, is a member of the Kai Group. Kai is a major manufacturer and distributor of disposable razors, surgical tools, personal care products, and housewares in Japan.

Today we will be discussing one of ZT’s newest sprint runs, the 0850CF.

The blade on this ZT is made out of CPM-20CV stainless steel. This steel is known to be one of the best of the best—not just premium, but ultra-premium. There are not many steels that are going to compete with CPM-20CV steel.

This steel is made by Crucible Industries, which is a steel manufacturer known for making high end steels that will last through the ages. They produce some of the most popular steels on the market today. This steel is sort of known as Crucible’s venison of Bohler’s M390 steel, which is also incredibly popular. CPM-20CV steel is slightly newer on the market, but it has strongly made its way into the market as a dominant competitor.

This steel is a Powder Metallurgy tool steel, which does mean that you get a combination of some pretty impressive characteristics. Some of these include high levels of wear resistance as well as the steel being incredibly corrosion resistant because of the chromium in the formula. Also, this steel is going to keep its edge for long periods of time, which means that you won’t have to worry too much about maintenance. You will be able to use this knife for longer periods of time without worrying about it staying sharp for when you need it most—it will be sharp.

The blade actually has been finished with two different tones. The first and dominant finish is a satin one. The second one, which takes up much less of the blade is a DLC black finish.

The satin finish is the most popular blade finish that you are going to find in the current cutlery industry. This is partly due to how versatile and useful it is and partly due to the look that it gives the blade. This finish is created when the manufacturer repeatedly sands the blade in one direction with an increasingly fine level of an abrasive material. The most common abrasive material is a fine sandpaper. This process works to showcase the fine lines of the steel, which creates a classic look. This process also shows off the bevels of the blade, which also adds to the traditional look.

One of the reasons that the satin finish is traditional is because it falls in the middle of the spectrum in terms of luster. This means that you can easily find blades that are more reflective as well as blades that are more matte. The next reason is one of the reasons that this is such a versatile blade is that the satin finish actually works to increase the corrosion resistance of the blade. It also cuts down slightly on glares and reflections.

The next finish is the black DLC. This stands for Diamond-Like Carbon coating, which is renowned as one of the best coatings that you can find on a blade. This coating is known for being pitch-black, which means that there are going to be no glares or reflections. However, that is not why it is such a sought-after blade finish. The real reason is because of how incredibly hard it is. This is the hardest blade coating that you are going to find, which means that it is not going to chip or wear off with time or hard use.

The blade has been carved into a sheepsfoot blade shape. This is not a common blade shape to see these days. The shape is made up with a totally straight sharpened edge, which does mean that there is no belly for you to slice with. The back is large and very curved down to meet the sharpened edge. Because of the shape, you also have more of a “false” point, which means that you won’t be able to stab much with this knife. However, it also means that this knife can be much safer. Rescuers and sailors are known for using the sheepsfoot or blade shapes similar to the sheepsfoot so that there are no accidental stabbings. That being said, the blade on the 0850CF is slightly modified and you will find more of a point than most sheepsfoot blades. This does mean that you will be able to pierce very slightly, but still not as much as some shapes like a clip point.

The spine is curved and not sharpened, which does mean that you can place your hand on the spine while you cut to give yourself better control. The blade is going to give you very straight cuts, it is going to be easily controlled, and you won’t have any accidental stabbings. That being said, because of the lack of point and belly, the knife does not have a lot of versatility.

That being said, while it is strong, it is not even close to being indestructible. This material does suffer from being rather brittle. This is because all of the fibers are arranged in a single direction. This means that in that specific direction, it is going to be incredibly strong. However, when it starts to be stressed in other directions, it is going to break apart or crack.

This is a more expensive material because the creation of a carbon fiber handle does take a lot of labor. This means that you will also only going to find it on higher-end knives. Also, with the different weaves, the light reflects in different manners. This means that you are going to see many different designs. In this specific handle, it has a diagonal weave.

The handle is built with a couple of angles. The spine slants upward to about the middle of the spine, where it angles down. The butt is also squared off, with angled edges, instead of rounded ones. The belly is full of more curves. There is a slight finger guard, following that, there is a finger groove. This gives you some comfort.

The pocket clip is not a reversible clip and is not a deep carry. The clip is attached for tip up carry only on the traditional side of the handle. This does mean that the knife is not going to be fully ambidextrous. The clip is also not a deep carry, which does mean that it is not going to stay as securely in your pocket as it could. However, it should stay pretty well, and you won’t have to worry about going about your day-to-day tasks. 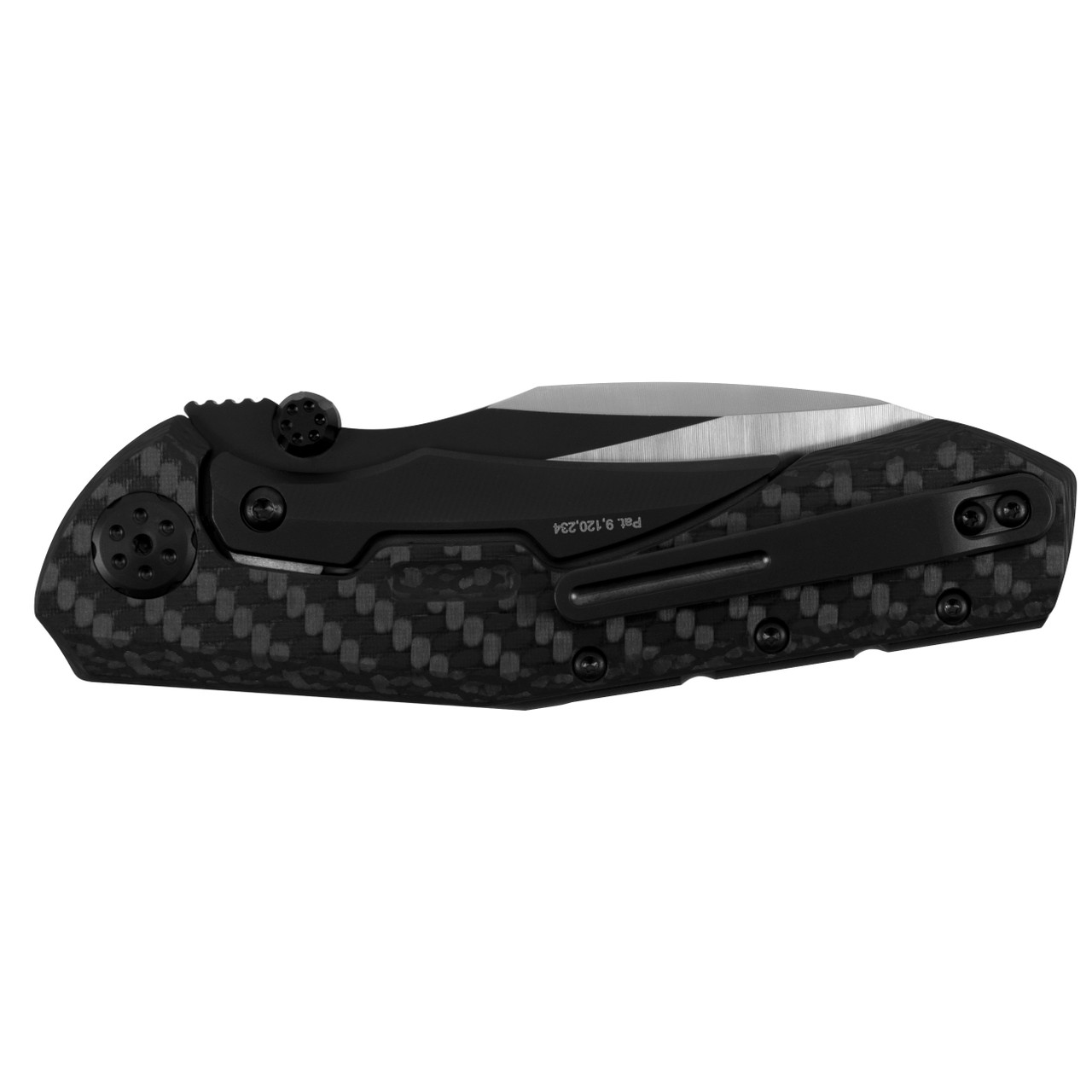 The clip is all-black to match the handle. It also tapers slightly toward the butt of it. It is kept in place by two black screws, which you can see through a whole near the tip of the clip. These screws match the rest of the hardware on the Sprint Run.

The clip is made out of titanium, which is going to be a stronger material. You will not have to doubt the sturdiness of this clip.

This is a folding knife that has been equipped with a decorative aluminum thumb stud. The thumb stud is the most common one-handed opening mechanism that you are going to find in the cutlery industry. It is basically exactly what it sounds like: a small stud that sits on the spine of the knife. This stud is accessible from either side of the blade, which is not always the case. However, this means that it is going to be fairly ambidextrous. The easily-accessed clip allows you to open the knife from either side.

To open this ZT with the thumb stud, hold the knife in your hand, extend your thumb, and push against the stud. This is going to swing the blade open where it will lock into place, ready for use.

Some of the benefits of a thumb stud are that it is easy to use and easy to get the hang of. You’ll be easily able to use it whether this is the first knife that you’ve ever used that has a thumb stud, or if you are a seasoned knife expert. There is one major drawback to a thumb stud though: when you are swinging the blade open, the motion does put your fingers in the path of the blade. This is not the safest mechanism to use because of that fact.

The blade on this Sprint Run measures in at 3.75 inches long with an overall length of 8.7 inches long when the blade is opened. This knife weighs in at 4.3 ounces, which is a great weight if you are hoping to have this with you at all times. This is not too heavy, not too light. This weight will give you the heft that you need without weighing you down. You will be able to rely on this weight, without it being a nuisance. Also, the 0850CF was made in the United States of America. This means that you can not only rely on the quality of it, but you can also feel proud to own, carry, and use it.

This limited Sprint Run folder model features carbon fiber handle scales, a modified sheepsfoot style blade in a DLC black and satin finish and the titanium pocket clip is designed for tip up carry only.

The Sinkevich and Rexford designed 0850CF features an ultra-premium stainless-steel blade that is deployed manually with a decorative aluminum thumb stud that also echoes the aluminum backspacer that has been turned and sculpted. Built with a sub-frame lock with hardened steel lockbar insert, this knife is very lightweight considering its size.