Today we will be discussing the Boker Sub Kalashnikov Cleaver automatic knife in black.

The blade on this knife has been made out of AUS-8 stainless steel. This is an upper mid-range steel that is made in Japan. If you are looking to compare it to another type of steel, your best bet would be to 440B. However, AUS-8 is going to be slightly more corrosion resistant. It is also similar to 440C, except that it is a little bit softer than 440C. The 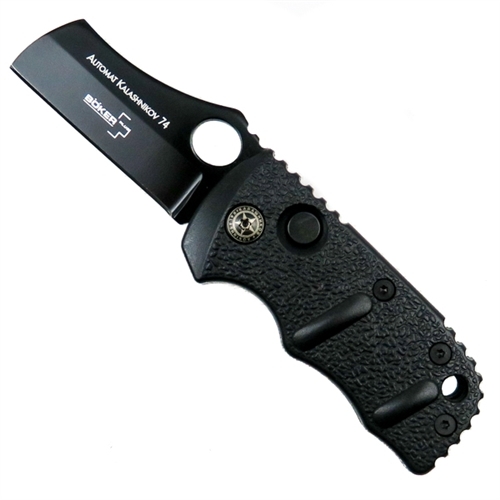 extra softness does mean that you are going to have to sharpen the blade more often. This is because AUS-8 stainless steel does have less carbon than some of the higher ranked steels. The more carbon there is in a steel, the better it is going to be able to hold its edge. However, it also means that it is going to be much easier to sharpen when you do need to. It is also a breeze to get a razor-sharp edge on this steel. This steel is tough enough to get the job done.

The blade has been finished in a black coating. There are plenty of benefits of having a coated blade. The biggest one is that it is going to prolong the life of the blade because the coating is going to increase both the corrosion and the wear resistance of it. This is accomplished because of the barrier that is formed in between the steel and the environment.

However, that is not the only thing that the coating does. It also adds a sleek black appearance to the blade, which creates an all-black knife. This creates a harsher, sleeker look than you get with the blade that has been finished in satin. Lastly, the coating also cuts down on glares and reflections, which means that if you are using this knife in the field, the light should not be able to give your position away.

Unfortunately, coatings can and do scratch off after time or heavy use. This means that overtime, the qualities and characteristics that the coating brings the Sub Kalashnikov are going to be diminished or completely gone. Once a coating has scratched off, the best plan of action is to get it re-coated, or else the blade may begin to rust or corrode. The scratches would also add in texture, which makes cuts and slices less smooth.

The blade has been carved into a cleaver shaped blade. This blade is very similar to the kitchen cleaver, which means that this pocket knife is going to excel at cutting, slicing, and chopping. This is because the blades are more solidly built than many of the other pocket knife popular shapes. One of the benefits is that even though this knife can fit in your pocket, you are going to be able to take on almost any task with it.

The handle is made out of a black aluminum. Aluminum itself is a widely popular option for high-quality knife handle materials. Aluminum is tough, durable, incredibly corrosion resistant, and best of all, it is lightweight. However, it is also prone to getting scratched.

The pocket clip on this knife is an extra-long, deep carry pocket clip. This means that you can easily move around without worrying about this knife falling out of your pocket. The clip extends nearly the entire length of the handle, which means that it is going to sit incredibly low in your pocket. The deep carry aspect also ensures that it is as concealed as it possibly can be. The clip is black, which matches the rest of the handle and blade, creating a fully black knife. This clip has been statically designed for tip up carry only on the traditional side of the handle.

This is an automatic knife that is deployed by a button on the front handle scale. Since this is an automatic knife, you will be able to bring this Boker into play easily and without fumbling. All you have to do is push the button, which will deploy the blade and lock it into place, ready to use. This does mean that it is going to be exceptional for quick tasks, or tasks that require both hands, since this can be deployed with only one hand.

The blade on the Sub Kalashnikov measures in at 1.95 inches long with a handle that measures in at 2.925 inches long. This creates a tiny overall length of 4.875 inches long. This is a small knife that is going to be easy to have with you at all times, because of how small it is. Of course, with such a small size, it only weighs in at a mere 2.4 ounces. While this is an advantage in terms of begin able to have it with you at all times, it can be a disadvantage because it may not provide you with the heft that you need to feel confident when it comes to some of the heavier-duty tasks that you may encounter.

BladeOps is excited to announce the newest exclusive model to the ever-growing arsenal of Boker Kalashnikov auto knives--the Sub Kalashnikov featuring a sub-2" cleaver-style blade. Quite possibly the perfect evolution of the most popular Boker automatic series ever, the Sub Kalashnikov boasts powerful push button action, a 1.95" blade, and a full-width handle for a rock-solid grip. This exclusive model features a black aluminum handle, all-black hardware, a cleaver style blade in a black finish and the extra-long deep carry pocket clip is statically designed for tip up carry only on the traditional side of the handle.

This knife is currently in stock at BladeOps, purchase yours here.