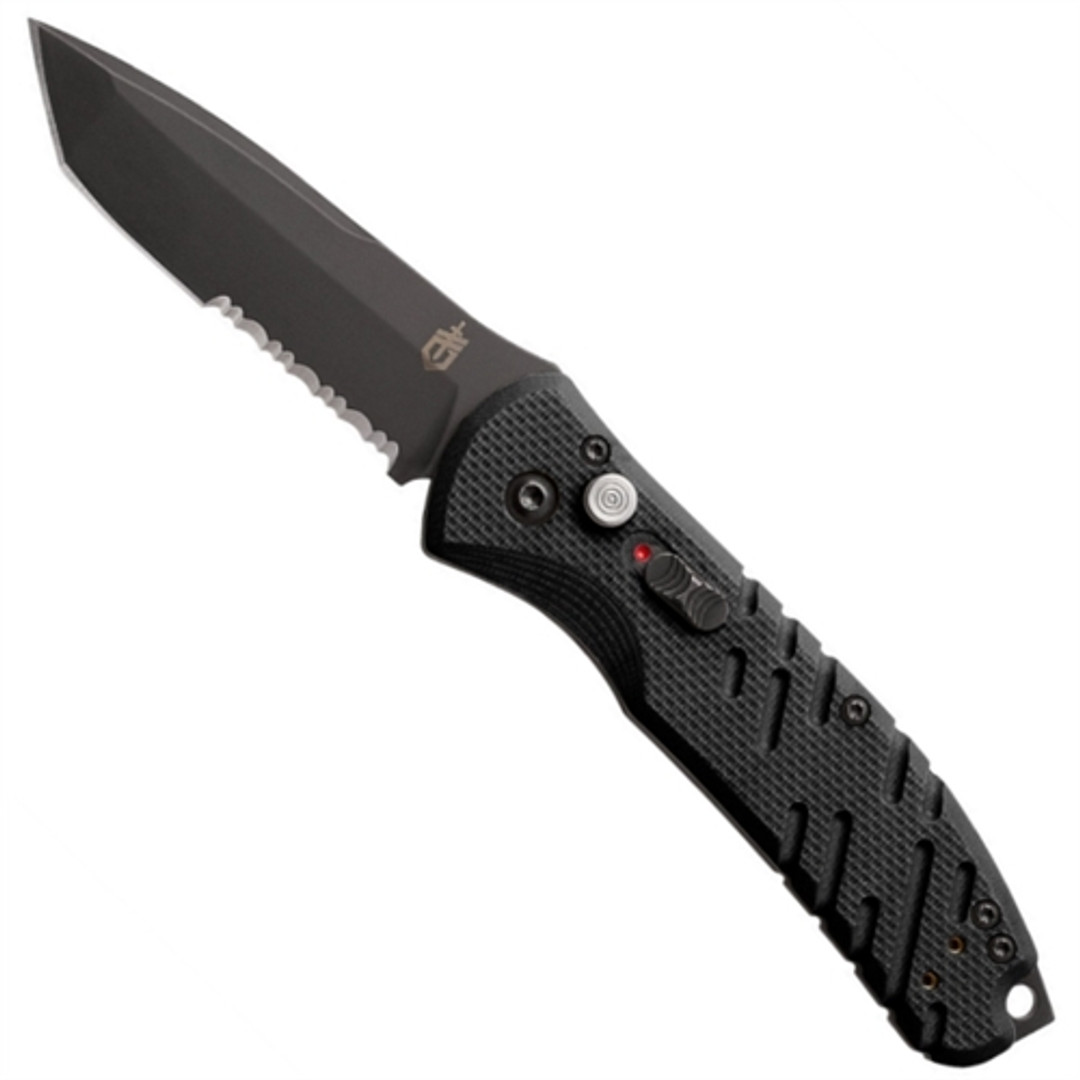 The Propel series by Gerber offers an ergonomic design coupled with premium materials and a rugged build that Gerber is all but too familiar with. With two models to choose from, you can be sure that there is a Gerber Propel auto knife to please every user and fit any need. The rugged G-10 handle scales offer a sleek and slender design that incorporates sporadic diagonal slits for maximum traction and the front of the knife houses a slide safety in close proximity to the firing button. The base of the knife also showcases a pommel with a strike point that can easily function as a glass breaker or self defense tool. This Propel model features a black handle and partly serrated tanto blade comprised of 420HC high carbon stainless steel in a black finish. This knife also features a unique 3-way multi-positional pocket clip design--meaning it is eligible for tip up or tip down carry on the right side but only eligible for tip up carry on the left side. Made in the USA.

Finding the ideal utilitarian tactical knife is no easy task. It needs to be familiar, like a well-worn pair of boots, yet still capable of quick action and worthy of long-term use. Drawing on its decades of knife design experience and critical feedback from military and law enforcement personnel, Gerber set to design a full-size, automatic knife thats as easy to handle as it is durable and fast to deploy in tactical situations. The Gerber Propel Auto knife offers proven fast, one-handed opening with a slim handle profile that fits comfortably in your hand, and pocket. Gerber, Description of the Propel

There is a lot to cover when discussing the Propel Auto made by Gerber. Listed below is a quick overview of what this knife has to offer. Quickly glance over it, to get to the finer details of the knife.

Automatic knives are becoming increasingly more popular to purchase and use, and for good reason too. Automatic knives, such as the Gerber Propel, offer many advantages that a typical folder, fixed blade, or even a spring assisted knife do not offer. One benefit to owning an auto is its deployment speed. With the press of a button, or a flick of a switch, the blade will flash open in a blink of an eye. Not only is it quick, but it can be fired off with one hand. These features come in handy during many circumstances. Is one of your hands in a bind or holding an object in need of cutting? An auto can be opened right away with one hand. EMTs and other emergency response teams are constantly faced with tribulation that requires the use of a decent knife. In many high stress situations, having a knife ready in a blink of an eye using only one hand can help someone else live for one more day. Plus, firing off an auto is fun to do. They are different than a traditional knife and bring a new element to the knife industry.

The handle material featured on the Propel is G-10 or G10. G-10 is similar to Micarta and Carbon Fiber, and is often used in handles because of its moisture imperviousness. G-10 is a fiberglass based laminate made by layers of fiberglass cloth that are soaked in an epoxy resin, are compressed, and then baked. The result is a material that is hard, lightweight, and strong. The surface of the G-10 is a checkering texture that is added for additional griping support. A unique property to the material is that the grip improves when wet. This material is difficult to break. It is also an ideal handle material because it does not shrink or swell in extreme hot or cold temperatures. Many knife companies prefer to use G-10 because of these properties, but also prefer to use it because it is easy to shape into different designs and has a possibility for an unlimited number of colors.

Utilizing the G-10 material, the handle scales on the Propel improve the overall quality of this tool. When holding the Propel, it definitely does not want to slip out of your hand. In addition to the G-10s natural textured surface, the handle has milled into it grooves to improve the gripping ability of the Propel. The grooves run at about a 45 degree angle to the rest of the handle and are in a randomly repeating pattern. With its 5 handle, there is plenty to hold onto for a comfortable grip. The knife has a plunge button lock to it. The button sticks out considerably far out of the handle. Accidently firing wont be an issue with the safety switch just below the button.

420HC is a 420 stainless modified with more carbon (the HC stands for "high carbon"), and a better heat treatment. 420HC holds a higher percentage than most other stainless steels. The content is much softer than other steels around this quality, yet it is more rugged than other similar products. This steel material has a greater carbon base and is mixed to a harder content than 420 stainless steels. It is said to be roughly comparable to 440A, but there is debate about this claim. Knives made from 420HC Steel are easy to sharpen and are durable when in constant use. Using old fashioned sharpening tools will work fine on this steel and it still takes the pressure of everyday use. The advantages in using 420HC Steel will have outdoorsman and survivalist jumping for joy. Because of its higher carbon content it is easier to sharpen while still retaining many qualities of a stainless steel.

To assist the Propel in its tactical uses, the blade on the knife is a tanto blade. The tanto blade has a somewhat chisel-like point that is thick towards the point (being close to the spine) and is thus quite strong. The tanto knife was inspired by ancient Japanese swords. The Westernized tanto is often straight but may also be gently curved. This style of blade became popular during the 80s shortly after the blade was created and introduced. The tanto does not have a typical belly (such as that on a drop point), which is sacrificed in exchange for a stronger tip. Its design makes it great for push cuts, rather than slicing, and piercing tougher materials because of its tips strength.

The Propels tanto blade comes in a combo package. It is part plain edge, and part serrated. Having a part serrated edge is helpful in many ways, and helps the knife become a better all-around tool. The combo edge is more popular because it allows you to use part of the knife for push cuts and the other part for rigorous cutting. It does a better job with cutting tougher materials. The reason for this is that additional strength comes from the higher pressure per area due to the serrations. Serrated blades have an upper hand when it comes to slicing through course, textured objects like rope, tree branches or thicker objects that require a back-and-forth sawing motion. The downside to a combo edge is that the serrations tend to be more difficult to sharpen than straight blades. Serrated edges require a special sharpening rod which fits between the serrations. Another thing to consider is the placement of the serrations on the blade because they aren't always useful for certain tasks. Overall, a combo blade takes the best of both a plain edge and a serrated edge. There is a great compromise between the two blade edges.

In some descriptions, the pommel is the same as the butt of the knife. Most of the time, the butt is the generic name for the end of the handle, while a pommel is a specific piece. It is either part of the tang or an end cap that reinforces the butt so it can be used for striking or hammering. In survival knives, a pommel is common, as it adds the hammer functionality, even if it is limited. In tactical knives, a pommel also adds the ability to hammer. With some pommels, including that on the Propel, it also serves as a glass breaker. Having a pommel on the knife makes it a more universal tool to accommodate to any number of projects and jobs.

In the Gerber Propel line, there are a few various products. Each offers something a little different. But in the end, they are all about the same.

The only differences between these knives are the blade steel, the handle color, and how the knife is opened. Other than that, each of these knives makes for a great tool. They all share the same G-10 handles as well as the same blade edge and style.

Before picking up the Propel to use for an everyday carry, there are a few items to look at to confirm it will be a good EDC. Those items include the following: its carry depth, its weight, its thickness and width, and its appearance.

One of the more important aspects to consider when choosing an everyday carry is its weight. It is bothersome and annoying to have a heavy object in your pocket, regardless the item. A good knife weight is anywhere as little as 3.0 and maxes out at 5.0 ounces. The Propel falls into this range. It weighs roughly 4.28 ounces. When holding and carrying it, it feels decently well. To give some better perspective, an average small apple weighs around four ounces. Not too shabby Id say.

When carrying a knife around all the time in your pocket, there is a limited amount of space available in your pocket. A good everyday carry knife should be comfortable to carry and easy to handle. When closed, the Propel is just about an inch wide. In terms of thickness, the knife is fairly thin. Were talking about half an inch thick. In theory, the Propel wont take up too much pocket real-estate.

As the knife is more of a tactical, heavier duty knife, I wouldnt worry too much about how it looks. Sure its got to look tough, but what really matters is if it will do the job. The handle helps the knife to look good, and is accented with its black hardware and black blade.

If carrying the knife everyday isnt enough for you, there is no need to fret. The knife serves as an excellent tactical tool for more extreme tasks. The term Tactical Knife often gets thrown around the industry for a variety of reasons. Whether it is a publicity tactic, or an actual description of the knifes purpose, there has be a filtering lens to see what the knife is really made for. In the case of the Propel, it has many tools equipped on it to make it useful for several different jobs. This is what makes a knife a tactical one.

A tactical knife is a knife with one or more features designed for use in extreme situations. A tactical knife is principally designed to be used as a utility tool, not as a weapon. Folding knives are rarely, if ever, designed primarily for fighting or combat. However, several military organizations have issued folding "utility" knives that were not intended to be used as weapons, but which had tactical features that appealed to military personnel as well as civilians. A knife with aggressive looks such as having a blackened blade and grips do not make a knife tactical.

Overall I am pretty impressed with this knife. There are many bells and whistles on the Propel to make it a more useful tool to use. The handle color instantly attracted me to find favor in this knife. The Propel is a solid tool that anyone looking for a tactical knife would be pleased to use.