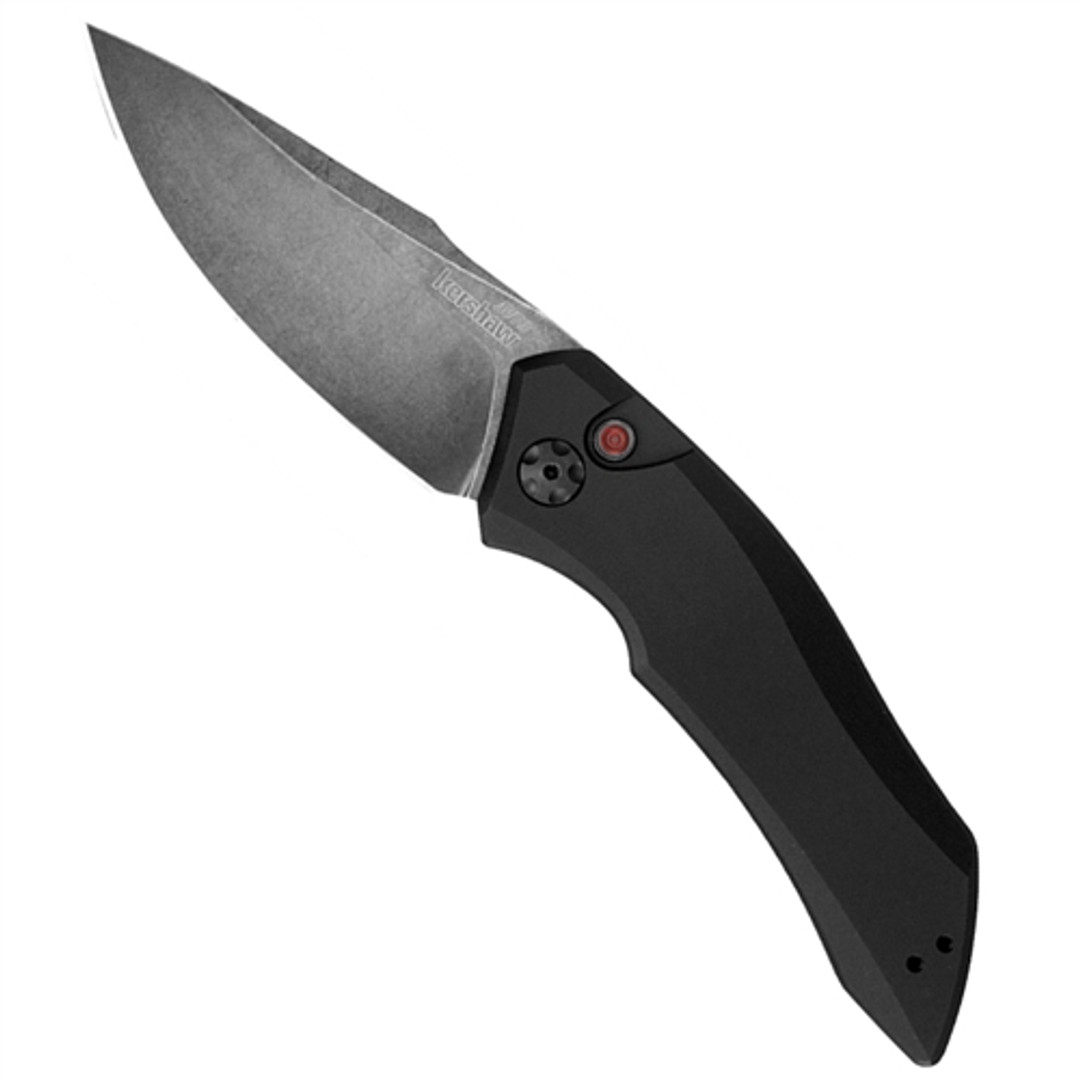 The Kershaw Launch 1 automatic knife features a CPM154 drop point blade with a black oxide BlackWash finish. This push button auto, produced at Kershaw's Tualatin, Oregon facility is built with durable anodized aluminum handles contoured to fit snugly in your hand. Push the recessed button and the blade snaps out. Comes with a left/right reversible pocketclip. Made in the USA.

The Launch 1 is what launched the Launch Automatic Series by Kershaw. This knife set the standard high for the rest of the knives that would soon follow. Each knife is uniquely different in shape and size, but each knife contains similar characteristics. It is interesting to see the difference between these auto knives. To show their variances, the table below will show you how they all match up against one another in terms of specifications.

The Launch 1 has a lot to offer. It has really set the standard high when it comes to Kershaw automatic knives. Below is the list of specifications for the knife.

We wont waste too much time here. Let us dive into what the Launch 1 has to offer.

Kershaw Knives started in Portland, Oregon in 1974 when knife salesman Pete Kershaw left Gerber Legendary Blades to form his own cutlery company based on his own designs. Early in Kershaws history, manufacturing was done in Japan. In 1977, Kershaw became a wholly owned subsidiary of the KAI Group. Twenty years later in 1997, the U.S. production facility was opened in Wilsonville, Oregon. Later, in 2003, the facility relocated to a larger production site in Tualatin, Oregon.

As you continue to read on, be asking yourself, Why would I purchase an automatic knife such as the Kershaw Launch 1? There are some distinct advantages to owning an auto knife. The first reason why someone would want to own one is because of how quickly the auto knives open. For some, this may not be a valid reason to purchase such a knife. However, having an auto knife can make all the difference between life and death. EMTs and other emergency response teams are constantly faced with tribulation that requires the usage of a decent knife. And in many high-stress situations, having a knife ready in a blink of an eye can help someone else live for one more day. Besides being quick, auto knives are able to be opened with just one hand. This is not only convenient for many people, this is also beneficial to those that are working with multiple hands and need that feature, or some may only have one hand. Above any other reason, auto knives are just too cool. Being able to flash open a knife in the blink of an eye just by pressing a button or moving a switch with one hand is simply impressive.

The blade steel that you will get with the Launch 1 is CPM-154. Many people have some confusion when it comes to CPM-154 steel. It is commonly mistaken for its similarly named counterpart 154CM. Crucible Particle Metallurgy 154 or CPM-154 differs from 154CM in a couple of ways. The CPM manufacturing process produces a more even distribution of the carbides in the grade though the chemistry of both is the same, giving CPM-154 an easier grinding and polishing abilities. Plus it provides a tougher steel than conventional 154CM. Both of these steels retain similar heat treat response and wear properties. CPM-154 offers better corrosion resistance, better wear resistance, and better hot-hardness than 440C. It also offers better edge retention and chipping resistance than 440C. The chemical composition for CPM-154 is Carbon 1.05% Chromium 14.00% Molybdenum 4.00%. Some additional advantages of CPM for the end user include improved wear resistance, improved toughness (less prone to chipping), consistent tool performance, and good grindability (better able to re-sharpen). All of the great properties of this steel is what you can expect to find with the Launch 1.

The blade that is featured on the Launch 1 is a clip point. A clip point blade is one of the more popular blade shapes used today. What defines a clip point is the back edge of the knife runs straight from the handle and then stops about halfway up the knife. Then the angle bends and continues to the point of the knife. This "cut-out" area can be straight or curved, and is referred to as the "clip. Some advantages of the clip point are its sharp controllable point, it is good for piercing, and there is plenty of cutting edge for slicing. One disadvantage of the clip point is that the point is narrow and weaker than other blade styles. In the end, though it is a great blade to have, especially if you will be doing a lot of slicing. What is nice about this certain blade is instead of a straight edge that dips down, it slightly curves up and then back down to the tip to create a comfortable place to put your thumb when cutting.

Take everything that is good about a stonewash finish, and add black to it. The Launch 1 has a fine stonewashed blade on it. The process of getting a blade to look this way begins when the blade is rolled and tumbled with pebbles and an acid of sorts, then smoothed. What is different with the blackwash stonewash finish is the use of different acids to create the black look to the blade. In theory, it can hide scratches or other abrasions to the blade. This is a favorable characteristic that many knife owners desire. Because of the tumbling process to create this finish, it looks as if there are already hundreds of markings on it. Yet, the markings are done in a natural way to form a work of art. Similar to a snowflake, no two stonewashes are the same. The finish has a different look to it. It is able to reflect direct light off the surface blade. With all of the noticeable artistic markings on the knife, there is no need to worry about other markings that may come with using the knife. The knife can be used for its intended purpose of cutting and doing any other type of work while taking on any marking. Some suggest that because of the process, a stonewashed knife can become more resistant to rust as well. The acid oxidation it goes through in the process enhances a blade's rust resistance with a stable oxide barrier between the steel and its surrounding. Another benefit of stonewashing a blade is their low maintenance and their ability to preserve their original look over time.

The handle on the Launch 1 is made of an anodized aluminum. Aluminum is similar to titanium, in that it is a nonferrous (non-iron or non-steel) metal. The aluminum gives the knife a solid feel, without adding the extra weight. It is strong, durable, and has a great resistance to corrosion. When first holding the knife, it is cold to the touch. However, it quickly warms up and feels great to hold. It is also cost effective which helps to reduce the overall cost of the knife. The aluminum handle on the Launch 1 is smooth and has rounded edges for a more comfortable hold. The handle fits perfectly in the palm of your hand. Its position is in line with that of your fingers to give a secure holding on the knife. It also features the iconic red bullseye button. This helps add some character to the overall design of the knife. Along with the bullseye button, there is the Kershaw rendition of the American flag on the backside of the handle, signifying that this knife is indeed made in the United States.

Additionally, with the Kershaw name marked boldly on the clips surface, the clip barely sticks out an eighth of an inch. Many pocket clips on various knives have problems with the clip bulging out, or that the clip is too long, or simply the clip just gets in the way while holding the handle. The clip on the Launch 5 does not have these issues because it maintains a low profile. When it comes to holding the handle, it isnt a nuisance in any way. Another nice thing about the pocket clip is that it is reversible. Everybody, regardless of hand dominance, can enjoy the Launch 1. Additionally, the clip is a tip-up, making it safer in any pocket. The pocket clip is about an inch and a half long. The last nice thing about the handle is the integrated backspacer. Having a backspacer helps to protect the blade from smaller objects such as change in a pocket. The spacer has a design in it that looks as if little metal balls were cut from out of it. Part of the design also provides a hole for lanyard. Overall I am impressed with the handle.

Hopefully, youre convinced to carry a knife with you wherever you go. There are, however, a couple of elements to inspect before purchasing a knife you will carry every day. Those include the following: its carry depth, its weight, its thickness and width, and its appearance.

Even though the Launch 1 is one of the larger knives in the Launch Series, it still is comfortable to carry. When closed, the knife is just over four and a half inches long. Typically I carry knives that are anywhere between three and a half to four inches long when closed. Having that extra half inch will not make that big of a difference. The biggest things to ask are will it fit in my pant pocket, and will it fall out of my pocket?

One of the more important aspects to consider when choosing an everyday carry is its weight. It is bothersome and annoying to have a heavy object in your pocket, regardless the item. A good knife weight is anywhere as little as 3.0 and maxes out at 5.0 ounces. Luckily, the Launch 1 falls into this range. It weighs roughly 3.95 ounces. When holding and carrying it, it feels decently well. To give some better perspective, an average small apple weighs around four ounces. Not too shabby Id say.

When carrying a knife around all the time in your pocket, there is a limited amount of space available in your pocket. A good everyday carry knife should be comfortable to carry and easy to handle. When closed, the Launch 1 is a little wider than the average knife, but not by much. It is about one and a half inches wide. In terms of thickness, the knife is very thin. Were talking less than half an inch thick. This is nice because the knife wont bulge in your pocket.

Dont let the rounded and soft edges fool you into thinking that this knife is a softie. Until you open it and let it loose, then the fierce look of the Launch 1 is released. When fully opened up, the Launch has a tactical look to it. By the contour of its handle shape, its color, and the way the blade looks, the knife just declares it is a tactical knife. Im not too sure if it would work too well as a tactical knife, but it sure looks like one.

Generally speaking, I am impressed with the Launch 1. It is a solid knife that is designed to work. Really, the Launch 1 set a high bar for the rest of the series to follow. With its high standards, it will transfer to your hand to help you with all that you do. It will only do that for you though once you pick one up. Get yours today!