Chris Reeve knives says, “Chris Reeve Knives is a production knife manufacturer. As a production company, we design and produce our own knives, as opposed to a custom knife maker who may work with a client to design and bring his or her knife idea to life. Our knives are produced in a combination of hand and machine work out of our machine shop in Boise, Idaho.”

Chris Reeve Knives began operations on January 1, 1984, in a one-car garage in Durban, South Africa, when Chris moved from full-time Tool and Die Maker/part time knife maker to full-time knife maker. For a couple years he was the only employee but gradually and steadily, the company has grown to reach its present position as a well-equipped manufacturing company and a noted brand in the industry.

The road between 1984 and today has not always been smooth. For many years, the endeavor was under-funded but with determination, Chris and Anne put all they had into producing the best knives possible, within the resources available. In March 1989, they moved from their native South Africa and settled in Boise, Idaho. That move in itself was a major undertaking but vital for the future of the company.

The company says, “Chris has always "pushed the envelope". Whether on a motorcycle or behind a belt grinder, he dreamed of being a world champion. He did not win a motorcycle world championship but in many respects, the standing of CRK today represents one. His induction into the Cutlery Hall of Fame in June 2015 could be considered his championship trophy. The single thought in Chris' mind has always been to design every model with deliberation, taking into account how the knife works, its intended purpose and the most appropriate materials. On this foundation, CRK is a vibrant business, has a great staff of well-trained employees, and remains a company with a worldwide reputation for raising the standards bar - "pushing the envelope" - for the industry.”

The blade on this knife is made out of CPM S35VN stainless steel. This steel was designed by Crucible, in collaboration with Chris Reeve, which makes it no surprise that it is used on this Chris Reeve knife. The two got together to make a steel that was similar to S30V steel, but with some major improvements. S30V steel was known for having very high corrosion resistance levels. It was also known for having the perfect balance between hardness, toughness, and edge retention, which is a harder combination to achieve than it seems. This is because the harder the steel is, the less tough that it is going to be. S30V steel had created one of the best balances between these two characteristics. However, because the steel was so hard, it proved complicated to machine or to sharpen. This is what Chris and Crucible decided to fix. They started with a similar formula, but this time, they used a finer steel structure. They also added a little bit of niobium into the steel matrix, which brings out the hardness but makes it easy to sharpen still. This steel is going to still have the best characteristics that the original version of the still did, but it is definitely improved. When it comes to such a high end knife, such as this one, you are only going to want the best steel. On the Circuits Sebenza, you are getting the best steel.

The blade on this knife has been stonewashed finished. This finish is a nice finish because it prolongs the original look of the blade overtime. It is able to do this because the rugged texture look easily conceals scratches and smudges that are going to occur with use and time. The rugged texture look is accomplished when the blade is tumbled around with an abrasive material, which is most commonly small ceramic pebbles. The pebbles rough up the steel, then the steel is removed, smoothed out, and polished. The stonewashed finish that this blade has is a subtler stonewash finish, which does mean that it has a little bit of a sleeker look. The subtle stonewash goes well with the “bank vault” feel that the handle creates.

The blade on this knife has been carved into a drop point style blade, which is the most common blade shape that you are going to come across in today’s cutlery industry. This is for a few reasons including that it is versatile and tough. The blade has a spine that slowly and shallowly curves from the handle to the tip of the knife. This slight curve does create a lowered point, which is one of the first meaningful characteristics on the blade shape. The lowered point is going to allow you to have more control when you are using this knife. You will be able to perform fine detail work with this knife because of the lowered point. The other big feature of the tip is that it is a very broad tip. This broadness is where you get the high strength that you have come to expect from this blade shape. The strength of this blade shape is nearly unmatched and you won’t have to worry about taking on tougher tasks, because this blade is not going to break easily. The broad tip is even enhanced by the high end steel that the Large Sebenza sports. The last reason that the drop point blade is loved by many is that it has a very large belly that allows you to easily slice through almost anything. The steel can also get to a razor sharp edge, which will enhance the belly perfectly. The drop point style blade really only has one major disadvantage: the broad tip. This is funny, because the broad tip gives the knife so much strength, but it actually also takes away some of your piercing capabilities.

The handle on this knife is made out of 6AI4V Titanium. Titanium is known as being very similar to aluminum, except 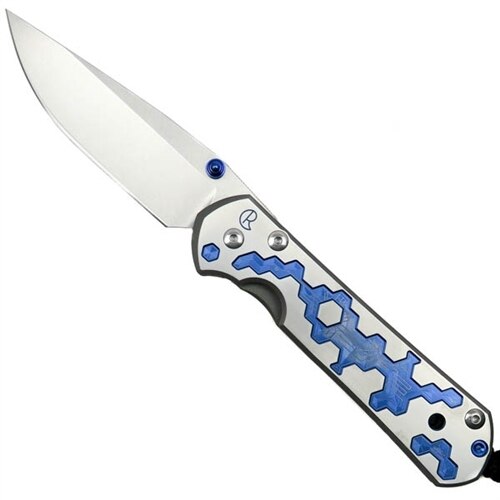 that between the two it is the superior metal. Titanium is a lightweight metal alloy, just like aluminum. Titanium is the heavier between the two metals, but with the extra weight, you get incredible strength. Although it is considered to be the heavier of the two metals, Titanium is not hard—it is definitely still a lightweight metal that will keep the overall weight of the knife down. However, because it is stronger, it is harder to machine, which also means that it is going to be more expensive to machine. Out of all the metals, this titanium is going to give you some of the best rust resistance.

Titanium is going to be prone to scratches, which is a drawback. The Large Sebenza’s back handle scale has been finished with a matte grey anodization, which will prevent some of the scratches, but definitely not all of them.

The front handle scale is shinier and does have bright blue “Circuits” that have been carved into the front handle scale and then anodized. The special CGG (Computer Generated Graphic) "Circuits" graphic is achieved with CAD/CAM software and then transferred to a CNC machine for milling and finally anodized in blue.

Other than the image on the front, the handle is simple. The spine is almost completely straight, but does curve in very slightly toward the middle. The belly of it does have a finger guard and then a finger indent to give you a bit better grip. After that, the belly angles toward the butt. The handle does have a lanyard hole in it.

The pocket clip on this knife is made out of titanium is statically designed for tip up carry and only on the traditional side of the handle. The titanium is going to make this pocket clip very durable. Since titanium is a little bit of a “springier” material, it will not be hard to pull it over your pocket and have it rest securely in place. Unfortunately, this pocket clip is not reversible, which does mean that the knife is not going to be fully ambidextrous.

The clip has the same matte grey finish that the handle does, which helps to make this a sleek-looking knife. The clip does taper slightly toward the butt of it. It is kept in place by a large, silver screw, which does match the majority of the hardware on this knife. If the hardware isn’t silver, it has been anodized a bright blue. Such is the case with the thumb stud.

This is a manual knife that has been equipped with a thumb stud as well as an Integral Lock frame lock design that was built to handle e a lifetime of use and abuse.

The thumb stud is a very common opening mechanism, especially for manual folding knives. It is a small stud that sits near where the blade begins and the handle ends. This stud allows you to push against it with your thumb, which is going to swing your knife open before locking it into place. There are some obvious advantages to a knife having a thumbstud. The first is that it is super easy to get the hang of as well as being easy to use. Also, the thumb stud allows you to open the knife with only one hand, which is ideal for complicated tasks that require two hands or your full attention. There are a couple disadvantages. The first is that some people don’t like how the stud extends off the blade, because they feel like it gets in the way when they are trying to use the knife. The second is that the thumb stud does put your fingers in the path of the blade when you are opening it. There have been many cases of people accidentally cutting themselves when they were opening a knife with a thumb stud. It shouldn’t be a huge problem, just be careful as you first get the hang of this knife.

The Chris Reeve Sebenza has become synonymous world-wide with quality, rock solid performance and a "bank vault" feel. First developed in 1987, the Sebenza has gone through only some minor changes over the years and in 2008, the Sebenza 21 was released to celebrate 21 years of this flagship model. This model features an Integral Lock® frame lock design that was built to handle a lifetime of use and abuse and each premium stainless steel blade is deployed with the single thumb lug. The special CGG (Computer Generated Graphic) "Circuits" graphic is achieved with CAD/CAM software and then transferred to a CNC machine for milling and finally anodized in blue. This larger model boasts titanium handle scales, a drop point style blade in a tumbled stonewash finish and the titanium pocket clip is statically designed for tip up carry only on the traditional side of the handle.

You can find all in-stock Chris Reeve knives right here at BladeOps.