Today we are going to look at one of his Small Sebenza 21’s, this time, the version with the CGG “Plated” handle that is currently available at BladeOps.

The blade on this Chris Reeve knife is made out of CPM S35VN stainless steel. This is fitting, because Chris Reeve actually partnered with Crucible to create this steel. Originally, the steel was named CPM S30V steel (which is still around today). The original steel was launched only by Crucible. It quickly became known as a reliable, high-end steel.

Not only did it sport a great balance, it was also known for its corrosion and stain resistance. This steel stayed looking nice through most environments with very little maintenance.

Like always though, there was a drawback. This original steel was hard to work with. It was hard to sharpen, and a professional sharpener was required to get a fine edge on it.

Chris Reeve and Crucible knew that they could make it better. They started by adding trace amounts of Niobium into the steel matrix. They also started with a finer steel structure. Both of these characteristics worked to make the steel easier to work with. Not only that, but the two parties ensured that the steel would keep all of its other great qualities. They were successful and this new steel, CPM S35VN, became a premium steel saved for only the best knives.

When Crucible is describing their CPM process, they say, “The CPM process produces very homogeneous, high quality steel characterized by superior dimensional stability, grindability, and toughness compared to steels produced by conventional processes.” This essentially means that the already phenomenal steel is going to have each of its qualities enhanced to make it even better. Because this is a CPM steel, it will be even easier to sharpen, stay sharp for longer periods of time, and look brighter and cleaner for longer periods of time. Really, you can’t go wrong with this steel.

For starters, this blade finish has some serious texture to it. This easily hides scratches and smudges, which makes the blade super low maintenance on this knife. It also reduces the glares and reflections slightly, so it isn’t distracting from the handle, which is definitely the star of the show.

The texture does create a slightly more rugged look to the blade, making the gold accents on this knife seem a little bit tougher, instead of elegant.

The blade has been carved into a classic drop point, which is the most common blade shape that you are going to find. This version of the Small Sebenza 21 does have a slightly more dramatic drop point shape to it. The spine stretches straight out of the handle for about a quarter of the length. At this point, it slowly angles down to the point, which does create a lowered, or dropped point. This is not only where the blade shape got its name from, but it also does give you a little bit more stability when you are slicing. This does mean that you will be able to take on fine detail work.

The other thing about the point of the knife is that it is a broader point. This is where the strength comes from that everyone expects of a drop point. It is not a fine tip, so it is not going to break when you are using it to work on tougher tasks. That being said, it is also one of the main drawbacks to the drop point blade shape. The broadness of it does take away from your ability to pierce.

The last great thing about the drop point is that it does have a large belly. The bigger the belly, the more surface area you have, which means the better you are going to be able to slice.

The handle is made out of 6AI4V titanium. Titanium is known as a low-density metal, which simply means that it is 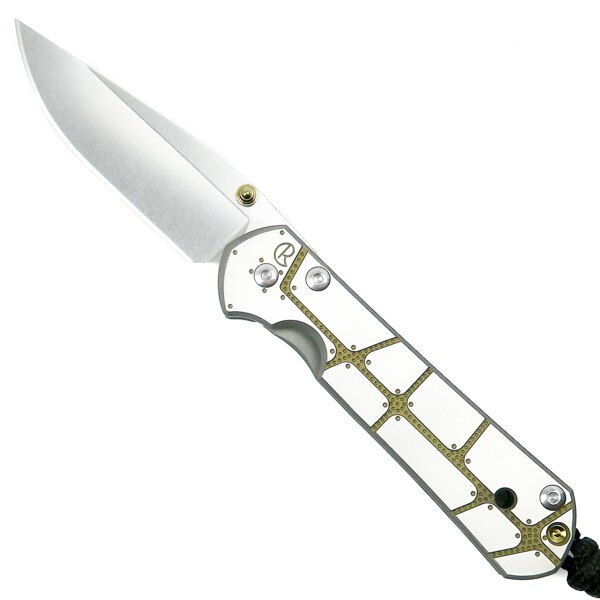 going to give you some serious heft for not a lot of weight. Of course, many people think of titanium as aluminums better sibling, which is true. When compared to aluminum, titanium is going to feel quite a bit heavier, but in the grand scheme of things, it really does not have that much weight to it.

Titanium is also tough and strong. It is durable and you will easily be able to rely on this knife when using. The last great benefit is that it does actually feel warm to the touch. While not everyone will need this benefit, if you are planning on using it in colder environments, this can be a major advantage.

The special CGG (Computer Generated Graphic) "Plated" graphic is achieved with CAD/CAM software and then transferred to a CNC machine for milling and then gold anodized. The plated design draws a line down the middle of the length of the handle, with smaller horizontal lines coming out of it. This creates different geometrical shapes in the titanium.

The back handle has been anodized a darker grey.

The pocket clip is also made out of titanium and is statically designed for tip up carry only on the traditional side of the handle. This does mean that it is not going to be an ambidextrous friendly knife. The clip is kept in place by a silver screw, which matches the bulk of the hardware on this knife, except for the select few gold accents.

The thumb stud is a very common opening mechanism, especially for manual folding knives. It is a small stud that sits near where the blade begins and the handle ends. This stud allows you to push against it with your thumb, which is going to swing your knife open before locking it into place. There are some obvious advantages to a knife having a thumb stud. The first is that it is super easy to get the hang of as well as being easy to use. Also, the thumb stud allows you to open the knife with only one hand, which is ideal for complicated tasks that require two hands or your full attention. There are a couple disadvantages. The first is that some people don’t like how the stud extends off the blade, because they feel like it gets in the way when they are trying to use the knife. The second is that the thumb stud does put your fingers in the path of the blade when you are opening it. There have been many cases of people accidentally cutting themselves when they were opening a knife with a thumb stud. It shouldn’t be a huge problem, just be careful as you first get the hang of this knife.

The thumb stud on this version of the Small Sebenza 21 is gold, which matches the gold anodization on the handle.

The lock itself is similar to a liner lock, but it is known for being a little bit stronger. The lock is actually made out of the entire handle, instead of a different piece of metal. When the blade is opened, the lock bar holds the blade open by pushing against the rear of the blade tang.

The blade on this knife measures in at 2.94 inches long with a handle that measures in at 3.935 inches long. This means that the overall length of the Chris Reeve Small Sebenza 21 is going to measure in at 6.875 incehs long. This is definitely on the smaller side of the folding knife spectrum. With some pocket knives, this small length could be an issue. However, the Small Sebenza 21 is made with high-quality materials which will ensure that it will be durable, strong, and long lasting.

The knife weighs in at 3 ounces, which is on the lighter side. This is to be expected because it is a shorter knife. However, it is not so light that you won’t be able to rely on it.

This, along with all other Chris Reeve knives, is proudly made in the United States of America.

The Chris Reeve Sebenza has become synonymous world-wide with quality, rock solid performance and a "bank vault" feel. First developed in 1987, the Sebenza has gone through only some minor changes over the years and in 2008, the Sebenza 21 was released to celebrate 21 years of this flagship model. This model features an Integral Lock® frame lock design that was built to handle a lifetime of use and abuse and each premium stainless-steel blade is deployed with the single thumb lug. The special CGG (Computer Generated Graphic) "Plated" graphic is achieved with CAD/CAM software and then transferred to a CNC machine for milling and then gold anodized. This smaller model boasts titanium handle scales, a drop point style blade in a tumbled stonewash finish and the titanium pocket clip is statically designed for tip up carry only on the traditional side of the handle.

This knife is currently in stock at BladeOps. However, it has been popular, and the quantities are going quickly. Click here if you want to secure yours today.