Columbia River Knife & Tool, Inc. is an American knife company established in 1994, and currently based in Tualatin, Oregon. CRKT was founded in 1994 by Paul Gillespi and Rod Bremer. Both individuals were formerly employed with Kershaw Knives. The company did not truly take off until the 1997 Shot Show when the K.I.S.S knife was introduced. The small folder, designed by Ed Halligan was a success. Within the opening days of the show the years’ worth of the product was sold out. They sold at 4-5 times original production numbers resulting in a tripling of production efforts.

CRKT owns fifteen patents and patents pending. These include the Outburst assist opening mechanism, Lock Back Safety mechanism, and Veff Serrated edges. The Outburst is the company’s proprietary mechanism for their assisted-opening knives. These knives are standard pivot joint liner lock or frame lock folding knife. Inside the knife there is a spring tab that catches the tang of the blade as it is manually opened. Once the blade reaches thirty degrees the spring takes over and quickly snaps the knife open.

The Lock Back Safety mechanism, also invented by Ron Lake, is similar in function to the LAWKS mechanism. It is a lock back folder with a switch that can prevent the locking bar from being depressed. Inside the handle there is a small rod with a flange near the butt of the handle. The other end is connected to a switch near the pivot end. When the switch is pulled back the lock functions as a regular lock back. When the switch is closed the flange on the rod slides under tip of the locking bar at the butt end. This prevents the depression of the bar and the blade form unlocking. Veff-Serrations were developed by Tom Veff, a sharpener and knife maker, and are exclusively licensed to CRKT for production.

Today we will be discussing the CRKT Bev-Edge. This is a new release for CRKT, so be sure to check with BladeOps often to see when they get it in. Until then, shop all CRKT brand knives here.

The man behind this knife is Eric Ochs, who hails from Sherwood, Oregon. When CRKT is giving a bio on him, they say, “Eric Ochs grew up with the Oregon backwoods constantly knocking at his door. In a way, his fate was sealed when his father gifted him his first knife when he was just six years old. Since then, he’s hard pressed to remember a day without one in his pocket. This self-taught talent is still inspired to this day by the pursuit of adventure in the Pacific Northwest’s rugged terrain from the top of the North Cascades to the lazy, meandering rivers at their feet.”

The blade on the Bev-Edge is made out of 8Cr13MoV steel. It is generally accepted that 8Cr13MoV steel is almost the equivalent of AUS8A steel. This is true. Even a hardcore knife lover would be hard-pressed to tell the difference 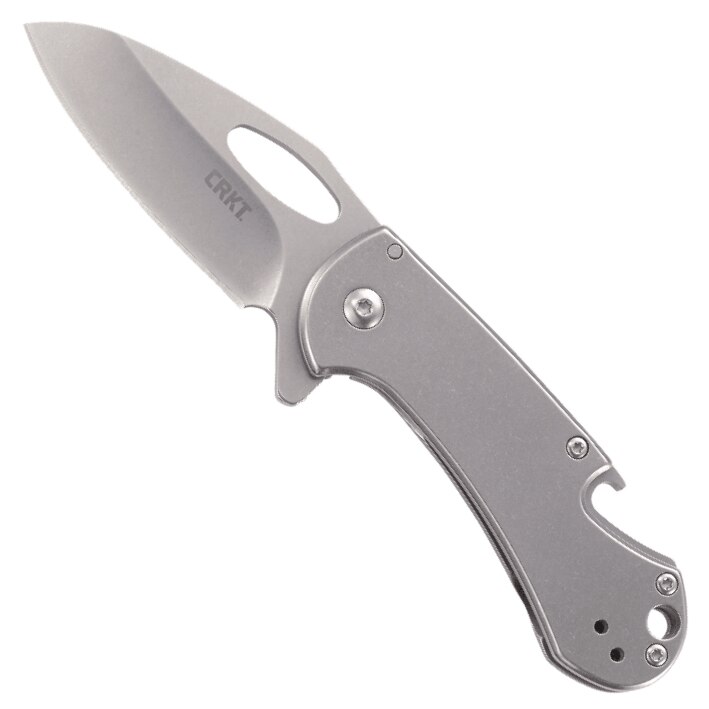 between a well-made 8Cr13MoV blade and a well-made AUS8A blade. Of course, when it comes to heavier duty knives, that is where the differences show. Just because they are similar, does not mean that there are no differences. For starters, 8Cr13MoV steel does have slightly more carbon which is going to add in hardness and wear resistance. 8Cr13MoV steel also has slightly less nickel. The key to blade performance for this steel is the manufacturing quality. This is a top-of-the-line Chinese steel that is going to significantly reduce the cost of the blade and give you great value. The steel has been hardened to a HRC 57-59.

The blade has been finished with a stonewashed finish. This is a common blade finish. It is created when the blade has been tumbled around with small pebbles, which are used as an abrasive. This roughs up the steel. After it has been tumbled, it is removed, smoothed out, and polished. This keeps the textured look, but gives you a smooth blade for smooth cutting.

The blade has been carved into a Wharncliffe blade shape. The Wharncliffe blade shape is often confused with the sheepsfoot blade, because they are similar. However, they also have their differences. While Wharncliffe’s usually have a completely flat cutting edge, the one on the Bev-edge has a mostly straight edge, although it does have a slight curve to it. This does mean that it is not going to excel at slicing as well as some shapes, but you will be able to use it for an occasional slicing task. The spine of the knife curves upward very slightly, but it angles down pretty sharply toward the tip. The tip is lowered, which does mean that you will have more control over it. The blade is extremely broad, which will prevent you from being able to pierce with it easily. This is a tough and durable knife.

The handle is made out of stainless steel that has also been stonewashed. The stainless steel is going to add durability and toughness, but it is not lightweight. In fact, it is known for adding a ton of weight to the knife. This is a smaller knife, which is why the handle still does not weigh more than 5 ounces, which is about the limit between an EDC and one that isn’t.

The thing about the Bev-Edge is that it is comfortable to use, but it is not going toad as much texture as you may want from a handle.

The pocket clip is completely rectangular from the top to the bottom. The butt of the pocket clip does bend up slightly. It is kept in place by two silver screws which do match the rest of the hardware. The clip is stonewashed to match the handle.

This CRKT has been equipped with a frame locking mechanism, a flipper, as well as a bottle opener.

The frame lock is one of the sturdier locking mechanisms that you are going to come across. This is because the frame is made out of the two handle plates, which are most commonly metal. You know that because there is a frame lock, the Bev-Edge is going to be able to take on some of those tougher tasks. You can rely on the frame lock to not close on your fingers when you are in the middle of using it, or to fail and spring open when you are not using it. Really, with the frame lock, you are as safe as you can be.

This does use a flipper mechanism to assist the user in opening their knife. The flipper is a piece of the blade metal that extends out of the spine of the handle when the knife is closed. The user can pull back on this extension, which will help flip the knife out of the handle and lock into place. Once the knife is opened, the flipper is set into place to work as a finger guard. Many people are fans of the flipper because it does not get in the way once the knife is opened, because it does protrude out of the blade, like a thumb stud does. People also love the flipper because it is an ambidextrous opening mechanism. The last reason that people love the flipper mechanism is for safety reasons. Unlike a thumb stud, the flipper keeps your fingers out of the path of the blade when you are opening and closing this knife. This means that you won’t have to worry about slicing your fingers when you are opening your knife. However, the flipper does take a few practices to get used to using this mechanism.

The knife also has a finger window, which is a large cut out near the spine of the blade. This allows you to get a better grip to swing the knife open where it locks in place. The benefit of a finger window is that it is ambidextrous—you can access it from either side of the blade. And, it does not get in the way when the blade is opened.

The bottle opener sits on the spine of the handle near the butt. You can use this to open any of your bottles—it works like a regular one!

When CRKT is describing this knife, they say, “For excursions that end with a cold one. Leave it to a designer from Oregon to create an everyday carry folding knife with hardworking outdoor capabilities and a bottle opener. From the trail to the taproom, the compact Bev-Edge™ is built to come up big in a pinch.

Inspired by his wild backyard and the craft beverages that helped put it on the map, designer Eric Ochs built the Bev-Edge™ with a pierce-through-food-packets Wharncliffe blade and built-in bottle opener for cracking open a fireside craft beer. Using the flipper, the stonewashed blade deploys swiftly and smoothly with IKBS™ thanks to lubed ball bearings in the pivot. It’s also built with a thumb hole for a more deliberate, manual open. When deployed, the frame lock secures the blade in place. The stainless steel stonewashed handle balances the look and resists wear.

Dig the Bev-Edge™ into a dusty backcountry adventure and wash it down with a craft brew.”

Like I earlier mentioned, this knife is going to be in stock soon at BladeOps. By the end of this year, you will be able to get your hands on one of these.