Columbia River Knife and Tool, Inc. is an American knife company that was established in 1994. The company is currently based in Tualatin, Oregon. The founders of this company are Paul Gillespi and Rod Bremer, who both previously worked or Kershaw Knives. This means that they know what they are doing when it comes to knives.

Their company did not really begin to get big until three years later, in 1997, at the Shot Show. This is when they introduced a small folder by Ed Halligan called the K.I.S.S knife. By the time the show was over, they had sold all of their product of this knife. In the end, they sold 5 times the original production numbers, which resulted in a tripling of production efforts.

CRKT owns fifteen patents and patents pending. Some of their most popular are the Outburst Assist Opening Mechanism, the Lock Back Safety mechanism, and Veff-Serrated edges. CRKT has collaborated with a wide variety of some of the best knife designers in the world, which is where their high-quality knives come from.

They produce anything from fixed blades, folding knives, multi-tools, sharpeners, and carrying systems.

CRKT says, “From day one, we put innovation and integrity first. We made a commitment to build knives and tools that would inspire and endure. We collaborate with the best designers in the world and operate on a simple principle: that the greatest thing we can give our customers is Confidence in Hand®.”

Today we will be talking about one of their newest knives, the Du Hoc.

The man behind this knife is Austin McGlaun, whose home is Columbus, Georgia. CRKT gives him a bio that says, “There are those who fight with knives. There are others who design them. And then…there’s Austin. Having served in the 101st Airborne Division in Iraq, and as a street cop in Columbus, GA, he knows that a knife has to work as both a weapon and a tool. As part of the Forged By War™ program he applied his skills as both a combat vet and knife maker to develop the Clever Girl™. Not to mention a new way to bring his fellow soldiers’ home. When asked about his design philosophy, he’ll tell you that if a knife is ugly but effective, it’s not ugly. It’s perfect.”

The blade is made out of SK5 Carbon Steel. This is one of the highest quality steels for a knife blade. It is the Japanese equivalent to American 1080. This is a hard steel that makes it create high quality blades and tools. SK5 carbon steel gives a knife the ability to cut through practically anything. It produces a mixture of carbon rich martensitic with a few undissolved carbides. The extra carbide will increase the abrasion resistance and lets the steel attain an ideal balance of good blade toughness. This steel also gives excellent edge binding ability. A knife with a SK5 carbon steel is going to be one of the best knives that money will get you.

The blade has been finished with a black powder coating. The coating is going to work to prolong the life of the blade because it puts a barrier between the high carbon steel and the environment. This makes it a little more durable, a lot more corrosion resistant, and a little more tough. The only drawback to having a coated blade is that the coating can and will scratch off over long periods of time or heavy use. Once the coating has scratched off, the only way to retain the same benefits would be to recoat the blade. Some of the benefits of the coating on the Du Hoc is that it cuts down on glares and reflections while also creating a very sleek finish.

The blade has been carved into a very dramatic recurved Hawksbill blade shape. The spine of the knife angles sharply down until about two thirds of the way up the spine. At that point, it is going to angle even more steeply down until it hits the very sharp point. This creates a few things.

For starters, this creates a lowered point, which is going to give you more control over the blade and your cuts while using it. The second thing is that it creates a very sharp point, which can be used for piercing, although the angles may be slightly off with how lowered and recurved it is. Really, the recurve and the incredibly fine tip are going to be the best for tearing.

The belly is a recurve shape, which means that it curves inward, instead of outward. This recurve paired with the lowered and sharpened tip is there to work its magic like a bird’s beak does. This is going to excel at slicing, especially once you “hook” it with the point.

That being said, the tip is also relatively thin, which does mean that it may suffer from being brittle or breaking when used on harder targets.

The handle on the Du Hoc is made out of G-10, which is a grade of garolite. This material is extremely similar to carbon fiber, although it is slightly inferior, which means that you can get it for a much smaller cost than you could with carbon fiber. 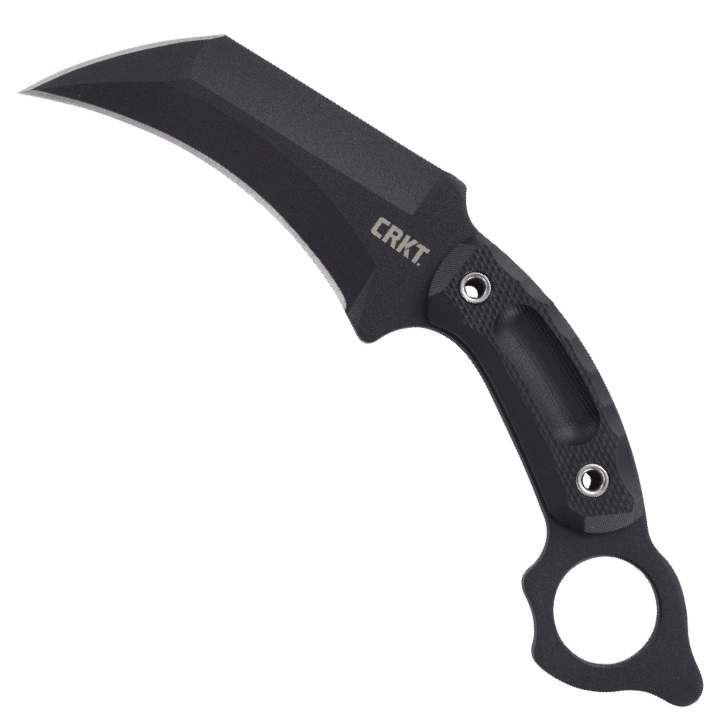 To create this material, the manufacturer takes layers of fiberglass cloth, soaks them in resin, and then the material is compressed and baked under pressure. This creates a material that is tough, hard, strong, and still lightweight. This means that even though the Du Hoc is a large knife, the weight is going to be kept to a minimum. G-10 is even known as the toughest of any fiberglass resin laminates.

G-10 unfortunately is known to be brittle, because all of the fibers are arranged in a single direction, which does mean that they can start to break apart when stressed in opposite directions are even with a tough or sharp impact.

The other good things about G-10 is that plenty of checkering or a different pattern can be added to the handle as texture, which will give the handle a solid grip that you cannot beat. This is important because with such a sharp and large knife, you really do need to have control over what you are doing and the G-10 will allow you to have it.

This material is going to be rather inexpensive to produce, so the cost of the knife is not going to sky rocket.

The handle itself is rather unique, with a very large curve to it. This is a full-tang blade, which means that the bulk of the handle is actually made out of the same steel that the blade is. This creates a tougher knife because there are no weak spots where the blade and handle are welded together. And, if the G-10 handle scale happens to break off, you still have the entire blade shape to use.

The belly of the handle is more squared off than most handles that you would find. There is a large finger guard that is going to protect you from slipping and cutting your fingers. This is important with such a large and sharp knife, because accidents do happen, and we are hoping to keep them to a minimum.

The spine of the knife is curved, which will keep you more comfortable as well as provide a slightly better grip. Again, when it comes to such a daunting knife, you need all of the control that you can muster. The butt of the blade has been carved into a thumb hole, which is typical in a karambit-style knife. You could also tie a lanyard into this hole in case you needed a little more control. You can wrap a lanyard around the handle to add in any extra grip that you desire.

This is a fixed blade knife, which carries a variety of different benefits. For starters, because there is no mechanism, the knife is going to be legal in more areas and a little bit tougher as well. This is because there is no spring or hinge that you have to worry about on the knife. There are also no inner mechanisms that are going to rust or break down over time, which means that this knife should last through the ages.

This leads us to the next benefit of having a fixed blade: it is incredibly easy to clean. All you have to do is wipe down the blade and handle and oil the blade occasionally. There really are no nooks or crannies where anything could get caught and begin to rust. This is ideal for an outdoors and tactical knife such as this one, because you don’t want to have to worry about too much when you are done using it in the field.

The butt of the handle is a thumb ring, which falls in line with the karambit-style knife.

The sheath on this is made out of Glass Reinforced Nylon, or GFN. This material is a modern material that is known for being practically indestructible. This is because the fiberglass fibers are arranged completely haphazardly, which means that it is strong in any direction, instead of just a single direction. Materials such as G10, Micarta, and even Carbon Fiber are similar to GFN, except that the other materials have their fibers arranged in a single direction, which means that it will start to break apart when it is stressed.

The blade on the Du Hoc is 5.095 inches long with a thickness of 0.202 inches. This is a fixed blade, with the overall length measuring in at 9.625 inches long. This is a large knife and a very hefty knife, weighing in at 9.3 ounces.

When CRKT is describing this knife, they say, “Built on an American hero’s legacy. It wasn’t until half a century after he served, that Forged by War® designer Austin McGlaun discovered his late uncle won the Silver Star at Point Du Hoc. To honor his service, he designed this colossal karambit fixed blade knife. With the help of Ryan Johnson of RMJ Tactical, it’s been perfected as a mission-inspired eye catcher from the tip of the recurved blade to the thumb ring at the end of the handle.

As a part of the Forged By War® program, Austin’s design matched with Ryan’s expertise makes the Du Hoc™ a powerful tactical carry. An ominous 5” carbon steel recurved blade—sharp on the nose and the belly—is a dependable companion in a self-defense situation. A thumb ring sits proudly atop the textured G10 handle for an unbreakable traditional karambit-style grip.

With an intentionally-designed knife comes a secure, customizable sheath. Crafted of tough glass-reinforced nylon, ease of access and safety of draw is unmatched.

With a history like this one, the Du Hoc™ was practically born on the front line.”

CRKT goes on to explain the Forged By War program by saying, “In 2013, Ryan Johnson of RMJ Tactical, designer of elite, military, tactical tomahawks, approached CRKT® with the news that he had been working with a few combat veterans that had returned from war with varying degrees of post-traumatic stress (PTS).

To help work through their challenges, they have been designing and forging steel into custom tools. Drawing from their experience earned in combat situations, they have been creating tools they wished they had available to them in the battlefield.

CRKT® cares deeply about our returning veterans and we saw a way to give back to the community that created them. In 2016, we launched the Forged By War® program.

These are mission ready tools, designed by veterans, with a portion of the proceeds donated to the veterans' charity of choice.”