CRKT has been a reliable American company since 1994. Over the past two decades, they have developed a fantastic reputation based on their knife designs, the selection of knives that they offer, and the quality of those knives. CRKT puts innovations and integrity first, because they want to be known for building products that can inspire and endure. They have been working with integrity since the very beginning. This means that they build products that are can perform reliably whether you are using it for work, fishing and hunting, tactical, survival, or any other need.

Working with integrity also means that CRKT will deal with their customers honestly, letting you know that they respect and cherish you. They also want to put innovations first, and to do that, they try to bring useful technological advancements and entirely new product concepts to market. To achieve this purpose, CRKT has collaborated with many of the world’s best knife designers and the best knife makers. Out of these collaborations have been born some of the most innovative and ground breaking technological advancements that are in the knife community. Some of these innovations include the Automated Liner Safety System, the IKBS Ball Bearing Pivot System, and the OutBurst Assist Opening Mechanism.

One of their 2019 releases is called the Helical Black and is what we’re talking about today.

The man behind the Helical is Ken Onion. When CRKT is describing him, they say, “Ken is the real deal. The youngest ever inductee into the Blade Magazine Hall of Fame in 2008, he is recognized as one of the most innovative and successful knife designers of all time.

“In 1996 he created the first commercially successful assisted opening mechanism, and 20 years later unveiled his award-winning Field Strip Technology. As the designer of the successful Eros™ folder series, as well as the award-winning Hi Jinx™, Ken never seems to be at a loss for ideas.” 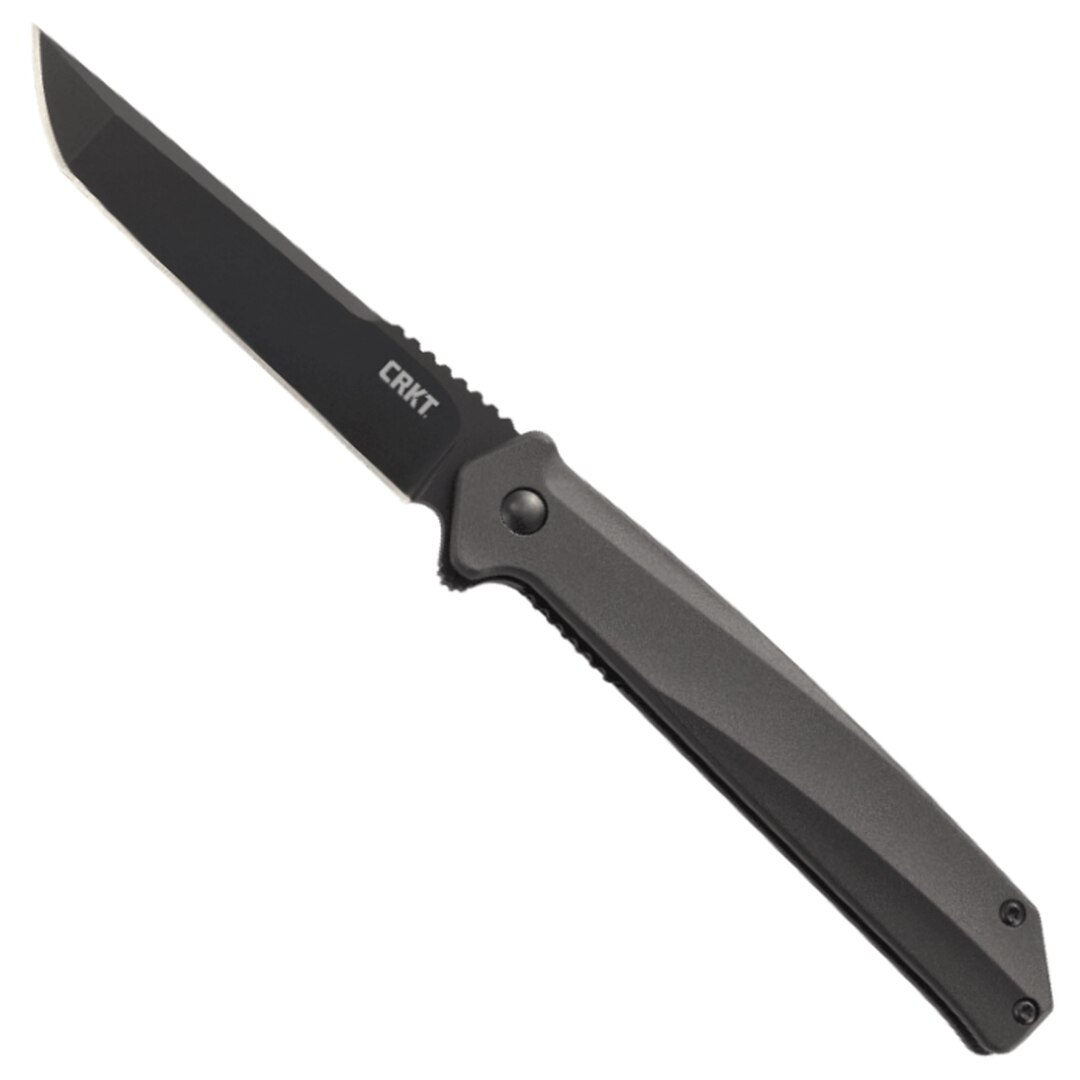 The blade on this knife is made out of D2 steel. This is a tool steel that is known as a semi-stainless, because it falls just short of the required amount of chromium, which is 13%. Even though it is not a fully stainless steel, it does give you a good amount of resistance to corrosion. In the tool steels, D2 is much harder than the rest and it will hold an edge a little better than the rest. Also, it is not as tough as many other steels and much harder to sharpen. To get a fine edge on the steel, you do need to be a master sharpener.

The blade has been coated with a black oxide finish. A coating serves a variety of purposes on a knife blade and the first and most important is to prevent corrosion. A good coating can greatly reduce maintenance time on a knife, which comes in handy in many situations. Plus, a coating eliminates any shiny surfaces. The coating, especially a black coating, gives this blade a very sleek look. Unfortunately, with coated blades, the coating will sooner or later come off. And while you might think it looks cool to have a beat up blade, the coating will not provide those quality benefits that it once did. One of the disadvantages about this knife is that it is a black oxide coating which is actually the lowest quality of coatings that you can find. It will serve its purpose, but it is going to scratch off with heavy use. Maybe stick to the everyday basics with this one.

The original look for the tanto blade shape came from the ancient Japanese long and short swords that were built for piercing through armor. While this tanto shape is modernized, it still has many of the same qualities. For example, this blade has a high point with a flat grind, as well as lots of excess metal near the tip. Each of these characteristics are going to allow the blade to repeatedly pierce into a tough material without breaking. An interesting aspect of this blade shape is that it does not have a belly. Instead, the sharpened edge meets the spine at an angle, leading to an even stronger tip.

The handle on the Helical has been made out of 6061-T6 aluminum that was anodized dark grey. Aluminum is one of the most common knife handle materials that you are going to find in the cutlery industry. It is inexpensive, it is durable, and it is very corrosion resistant. 6061-T6 aluminum is the aluminum alloy that offers the strongest tensile yield, which does mean that it is going to be stronger and more durable than other aluminum handles.

Of course, aluminum does have its disadvantages. The first is that it is not going to offer you as much grip as you are going to fin with other materials. The second is that it is going to be prone to scratches.

This is where the anodization process comes in. Basically, the anodization process is a chemical process that literally changes the surface of the aluminum. It makes it stronger, harder, and even more corrosion resistant. Not only that, but it adds a grey color that is going to cut down on glares as well. Because the handle has been anodized, it is not going to be as prone to scratches as it normally would be.

The handle is relatively simple, the spine is mostly straight, although it does have a slight bend to it. The butt angles down at first and then goes straight down to the belly side of it. The belly is also completely straight, except that there is a slight finger guard that will protect your fingers form getting sliced. Aluminum does not offer as much texture and grip as many would like, so the face of the handle does have some grooves and ridges carved into it. This will add in the texture that you require for really having a grip in any situation. That being said, you still do not have as much grip as some other knives offer you.

The Helical does use a flipper mechanism to assist the user in opening their knife. The flipper is a piece of the blade metal that extends out of the spine of the handle when the knife is closed. The user can pull back on this extension, which will help flip the knife out of the handle and lock into place. The flipper on this knife is skinnier than your average flipper as well as being larger. Once the knife is opened, the flipper is set into place to work as a finger guard. Many people are fans of the flipper because it does not get in the way once the knife is opened, because it does protrude out of the blade, like a thumb stud does. People also love the flipper because it is an ambidextrous opening mechanism. The last reason that people love the flipper mechanism is for safety reasons. Unlike a thumb stud, the flipper keeps your fingers out of the path of the blade when you are opening and closing this knife. This means that you won’t have to worry about slicing your fingers when you are opening your knife. However, the flipper does take a few practices to get used to using this mechanism.

The locking liner is reliable and tough. However, it is not the most durable option for a locking mechanism that you are going to find, so you might not want to take on those extra hard tasks with the Helical.

When CRKT is discussing this knife, they say, “An everyday carry with a twist. This sleek, tactically-inspired folding knife is a Ken Onion thought experiment realized: what would it look like to put a rectangular knife handle in a vise grip and twist? In classic Onion form, the result is a surprisingly ergonomic and supremely useful everyday carry.

Ken Onion infamously pushes the limits of knife design with every new creation that’s released from his Kaneohe, HI shop. The Helical™ is no exception. With a hardworking powder coated D2 tanto blade, it’s quick to dig into an unopened box or snip a loose thread. An understated flipper doesn’t get in the way when you slip it into a pocket, but it quickly deploys the blade—when open, a locking liner secures it in place.

The twisted handles are the showstopper, carefully designed to fit snugly in your palm and outlast any mud, sweat, and grime it encounters.

The Helical™ is a twisted take on an old classic.”