CRKT says that their company was “Born in Oregon in 1994, Columbia River Knife and Tool® is an American company known for distinction in design, selection, and quality. For more than 20 years, CRKT® has put innovation and integrity first, making a commitment to build products that inspire and endure.” They wanted to make a commitment to “build knives and tools that would inspire and endure. We collaborate with the best designers in the world and operate on a simple principle: that the greatest thing we can give our customers is Confidence in Hand®.” Because of these aspects of their company, you know that you will always be able to feel confident in one of their knives.

Right now, the company is based in Tualatin, Oregon. The president is Rod Bremer. Rod Bremer was actually one of the original founders, along with Paul Gillespi. Both of these men were once employed by Kershaw Knives before they moved on and created their own successful knife company.

While CRKT does produce a wide range of fixed knives as well as folding knives, they also have a few products that are related to knives but aren’t knives. Some of these include multi-tools, sharpeners, and even carrying systems.

Along the road since 1994, which was over two decades ago, CRKT has collaborated with plenty custom knife makers. Throughout these collaborations, along with their own designs, CRKT has come to own fifteen patents and patents pending. These patents are what help to set CRKT apart as a fantastic knife and reliable knife company.

CRKT has recently released their line of 2019 knives and one of them is the Jumbones. We will be discussing the Jumbones today.

The man behind this new release is Jeff Park, who hails from Mililani, Hawaii. The CRKT bio about him states, “One fateful day in 2005, he walked into Ken Onion’s shop in Kaneohe, Hawaii, and never left. Well, that’s not entirely true, but he’s certainly made an impact on the world-class knife maker and has learned a thing or two along the way. Jeff Park is a detail-oriented type of guy, and by that we mean he’s an absolute perfectionist, and it shows in his simple, yet flawless designs. He’s an artist in the most fundamental respect: form follows function, and his knives reflect a remarkable understanding of both.” The blade on the Jumbones is made out of AUS-8 steel. The steel that is used to create the blade on a knife can honestly make or break the knife itself. Stainless steel is a popular choice for the blade’s steel because it is low maintenance due its rust resistance. The low maintenance also means that you can take this knife with you as an EDC and not have to worry about whether or not it is going to be able to take on what you throw at it—it is.

This specific stainless-steel alloy is AUS-8, which is a Japanese-made steel. This alloy has a lot of chromium in it, which is going to make it incredibly hard, extremely rust resistant, and capable of achieving a razor-sharp edge. These characteristics really do set this steel apart from the other high performing steels that you may come across.

This steel is comparable to 440C, Cm-154, and D2 steels. When it is given the proper heat treatment, you can rely on it to meet the standards of a true quality stainless steel. Overall, the AUS-8 blade is not going to let you down when you are most relying on it.

The blade has been finished satin, which is one of the most popular blade finishes in the cutlery industry today. This finish is created when the manufacturer repeatedly sands the blade in one direction with an increasingly fine level of a fine abrasive, which is normally sandpaper. This process works to showcase the fine lines of the steel, which is what gives it such a classic and traditional look.

The satin finish is more than that though. In terms of luster, it falls nearly in the middle. This means that you are going to be able to find steels that are more reflective than satin and you are going to find steels that are more matte than the satin finish. This helps to achieve the perfectly classic look. However, it also means that reflections are not going to give away your position if you are using the Jumbones in the field.

Also, the satin finish is low maintenance. While scratches will show up on the steel, it is not going to be as obvious as it would be with a more reflective blade. Plus, the satin finish does increase the corrosion resistance of the blade very slightly, which gives an already rust-resistant blade just a hint more of low-maintenance aesthetic.

The blade has been carved into a unique shape that is going to help you slice and tear when needed. The spine extends nearly straight out of the handle but does angle upward when it gets closer to the tip. This does mean that you are not going to have as much control over your cuts and fine detail work, because it is raised instead of lowered.

However, the point is fine and sharp, which is going to allow you to pierce much easier with it. Of course, since it is a fine tip, you do have to be worried about piercing harder targets, because it may be prone to breaking or snapping.

The upward movement of the blade is going to elongate the belly significantly, giving you more surface area to expertly slice. The belly on the Jumbones is large, very, very large. It is going to give you enough surface area and curve that you will be able to slice nearly anything with ease. 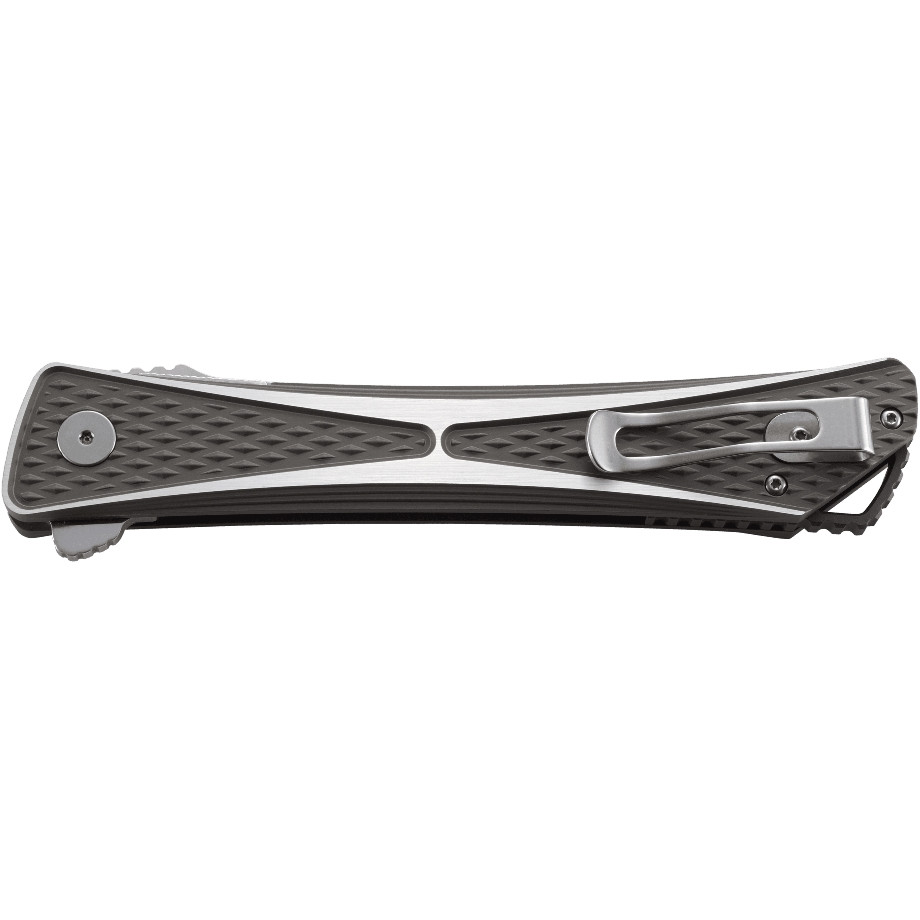 The handle on the Jumbones is made out of 6061 Aluminum. Aluminum is a popular handle material, because it has many qualities that make it an excellent choice for knife handles in particular. The first biggest advantage, especially on this knife, is that it is incredibly lightweight. This is a massive knife, so you are going to want to keep the weight down as much as you can. The aluminum handle does just that—it makes the Jumbones only slightly heavier than an EDC normally is. Some people worry that lightweight means that it is not going to have the heft that they crave out of their knife. This is not true. Aluminum is perfectly dense; such that it does not add unnecessary weight, but it does allow you to have the heft needed to feel confined in this knife.

The next big advantage is that aluminum is corrosion resistant. This will keep the maintenance levels down, which keeps stress levels in you down. Lastly, it looks good. And, it keeps its good looks for long periods of time.

The pocket clip on this CRKT is large and skeletonized. It is skeletonized to show the unique handle material underneath, but also to cut down on weight. With a knife this large, any ounce counts. The clip is a darker satin finish, which goes well with the blade.

The clip does flare out near the butt, which will help give a little extra grip on your pocket. This is not a deep carry, which is why the flare is so important—a knife this large is going to need all of the extra grip that you can muster.

The screws that keep the clip in place are silver, which do match the rest of the hardware eon the knife. Also, the clip can only be attached on the traditional side of the handle for tip up carry, which does mean that this is not going to be ambidextrous friendly.

This CRKT has been equipped with the IKBS ball bearing pivot system as well as a flipper to assist you in opening it.

CRKT describes the IKBS system by saying, “Designer Flavio Ikoma and Rick Lala invented this system that sets lubed ball bearings into the folding knife pivot. The result is rapid blade deployment that is smooth and fast. Go ahead, set a flipping land speed record.” This means that even though this is not an automatic knife, it is going to feel incredibly smooth. It also means that you won’t have to fumble too much with the opening mechanism, the IKBS system has your back.

The flipper is a common opening mechanism. It allows you to open the Jumbones with only one hand. However, it is not as easy to use as the thumb stud is. It takes a couple of tries to really get the hang of using the flipper. To open a knife with the flipper, you use your index finger to pull back on the flipper, which “flips” the blade open where it will lock into place.

One of the benefits to the flipper is how safe it is to use. The thumb stud is known for placing your fingers directly in the path of the blade. This has led to plenty of stories where someone is not focusing directly on what they are doing and end up slicing their fingers. The flipper is not like this. It keeps your fingers out of the pathway, which means that you are not going to accidentally slice your fingers. Also, once the blade is opened, the flipper acts as a finger guard which will further protect you.

The Jumbones is a good name for this knife, because it is definitely jumbo. The blade alone measures in at 4.85 inches long with a blade thickness of 0.158 inches. The handle and closed length adds significantly to the length, measuring in at 6.125 inches long. This means that the overall length of this massive knife is going to be 11 inches. This is a giant knife that does not mess around. With the crazy length, you can except a significant amount of weight. However, it surprisingly only weighs in at 5.6 ounces. This is on the heavier side, especially when you compare it to many EDC’s, but for just how large it is, this is not over-the-top heavy.

Just like its more compact counterpart, the Jumbones is modeled after the first custom release of designer Jeff Park from Mililani, Hawaii. Jeff has been Ken Onion’s right-hand shop man for over ten years now, and, after much goading, finally released a custom design of his own. It was received so well by the industry; it’s making a second appearance.

Fully open, it measures in at a staggering 11”. The oversized blade contributes to 4.8” of the length, features a full flat grind, and is deployed swiftly and smoothly with an IKBS™ ball bearing pivot system. The brushed aluminum two-tone handle, when closed, resembles the shape of a dog bone and gives the Jumbones its name. It’s finished with jimping on the back spacer for in-hand control and a Crossbones logo on the pivot.

The knife world couldn’t get enough of the Crossbones, so we brought it back in a big way with the Jumbones.”