Columbia River Knife and Tool, Inc. is an American knife company that was established in 1994. The company is currently based in Tualatin, Oregon. The founders of this company are Paul Gillespi and Rod Bremer, who both previously worked or Kershaw Knives. This means that they know what they are doing when it comes to knives.

Their company did not really begin to get big until three years later, in 1997, at the Shot Show. This is when they introduced a small folder by Ed Halligan called the K.I.S.S knife. By the time the show was over, they had sold all of their product of this knife. In the end, they sold 5 times the original production numbers, which resulted in a tripling of production efforts.

CRKT owns fifteen patents and patents pending. Some of their most popular are the Outburst Assist Opening Mechanism, the Lock Back Safety mechanism, and Veff-Serrated edges. CRKT has collaborated with a wide variety of some of the best knife designers in the world, which is where their high-quality knives come from.

They produce anything from fixed blades, folding knives, multi-tools, sharpeners, and carrying systems.

CRKT says, “From day one, we put innovation and integrity first. We made a commitment to build knives and tools that would inspire and endure. We collaborate with the best designers in the world and operate on a simple principle: that the greatest thing we can give our customers is Confidence in Hand®.”

Today we will be talking about one of their newest knives, the Monashee. 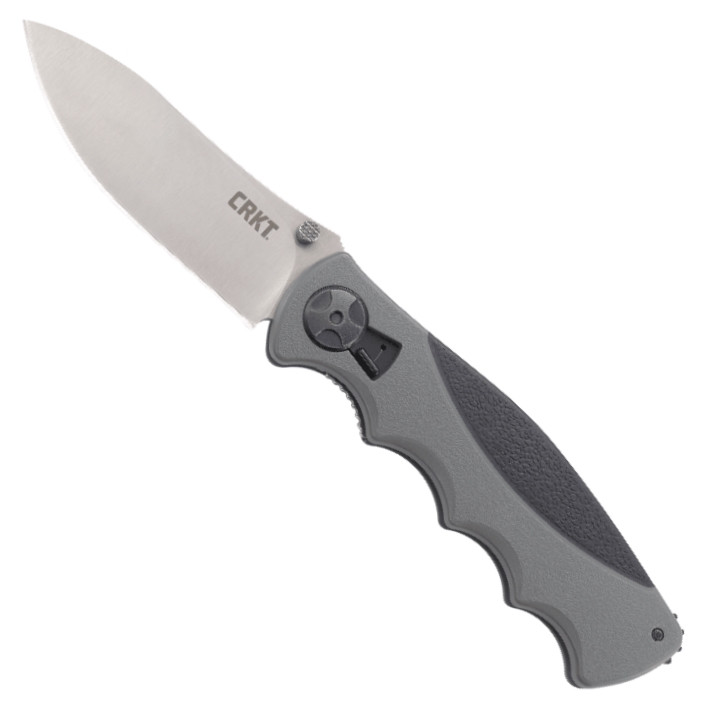 The man behind CRKT’s newest release is Russ Kommer, who is from Fargo, North Dakota. CRKT describes him in their bio by saying, “To say Russ is an outdoorsman is a bit of an understatement. A professional fishing and hunting guide, he started making knives when one of his clients brought him a custom knife and dressed an entire moose—without sharpening it. Since then he’s made it his duty to build the kind of tools only he would use. It just so happens his Bear Claw’s™, and Hoist’N Lok®, are the kinds other hunters use as well.”

The blade on the Monashee is made out of 8Cr13MoV steel. This is a steel that belongs to a Chinese series of steel. The best in the series is the 9Cr steel and 8Cr is the second best. This steel is interesting because it is just enough of everything. It is tough enough, strong enough, and sharp enough to get the job done. However, it is not going to excel at anything that it does except for its corrosion resistance. Surprisingly enough, this steel is incredibly corrosion resistant. This is nice for an EDC because it means that you do not have to put as much thought and concern into how clean you can get the blade after each use. Especially if you are choosing to use it outdoors or on some of the messier jobs. The other nice thing about 8Cr13MoV steel is that it is a budget steel. This means that it is going to significantly reduce the cost of the overall knife. Some people worry that this means that the blade itself is not worth the hassle, but with 8Cr13MoV steel, you can rely on the blade for a low cost.

The blade on the Monashee has been finished satin. This means that the manufacturer has repeatedly sanded the blade in one direction with an increasingly fine degree of sandpaper. This process works to showcase the fine lines of the steel, which is going to give the Monashee a traditional look to it.

Also, the satin finish falls in the middle of the luster spectrum, which means that it provides an even more classic look to the Monashee. The thing about a satin finish is that you can find a more reflective blade and you could find a blade that is more matte. It truly is a classic finish. The last thing that a satin finish does is that it helps cut down on some corrosion. This is an added benefit that you probably won’t be able to rely on, but it will add a little extra oomph to what the blade can handle.

The blade has a unique but tough shape, similar to a less-dramatic hawksbill. The blade curves down at first on the spine before rounding back up and then curving down toward the point. This creates a dip in the spine of the blade, which is going to look aesthetically pleasing as well as creating a thicker and more durable tip.

The tip is thick and not prone to breaking, which is important when it comes to some of the tougher tasks. That being said, it is not so thick that it would be impossible to stab with, you just aren’t going to be able to stab quite as easily as with a clip point or spear point. The tip is slightly lowered, which is going to give you a bit of added control, although it is not as lowered as a drop point.

The belly is the other aspect of the blade that really sets he Monashee apart—the belly is large, incredibly large. This means that slicing is going to be an absolute breeze. Slicing is what this blade shape is designed for, so you will have no issue with nearly any material.

The handle on this knife is made out of TPR, which is a Thermoplastic Rubber. A TPR handle will ensure slip resistance, even when the knife or your hands are wet. The thermoplastic rubber handle is lightweight, moisture-resistant, and will feel comfortable in your hand.

The bulk of the handle is light grey, although near the spine, there is a slightly rounded section that is a darker grey. Both portions of the handle are textured heavily so that you can know that you will have enough grip even during the slicker tasks.

To assist you with grip even further, there are four deep finger grooves that span the width of the belly on the Monashee. This will give you a comfortable place to rest your fingers, but more importantly, it will guarantee that you have a secure and solid grip on the Monashee during any task. The Monashee is built so that it delivers when you need it most.

The butt of the handle is mostly squared off, which adds to the thicker aesthetic that it has. There is no lanyard hole, which is a slight disadvantage. 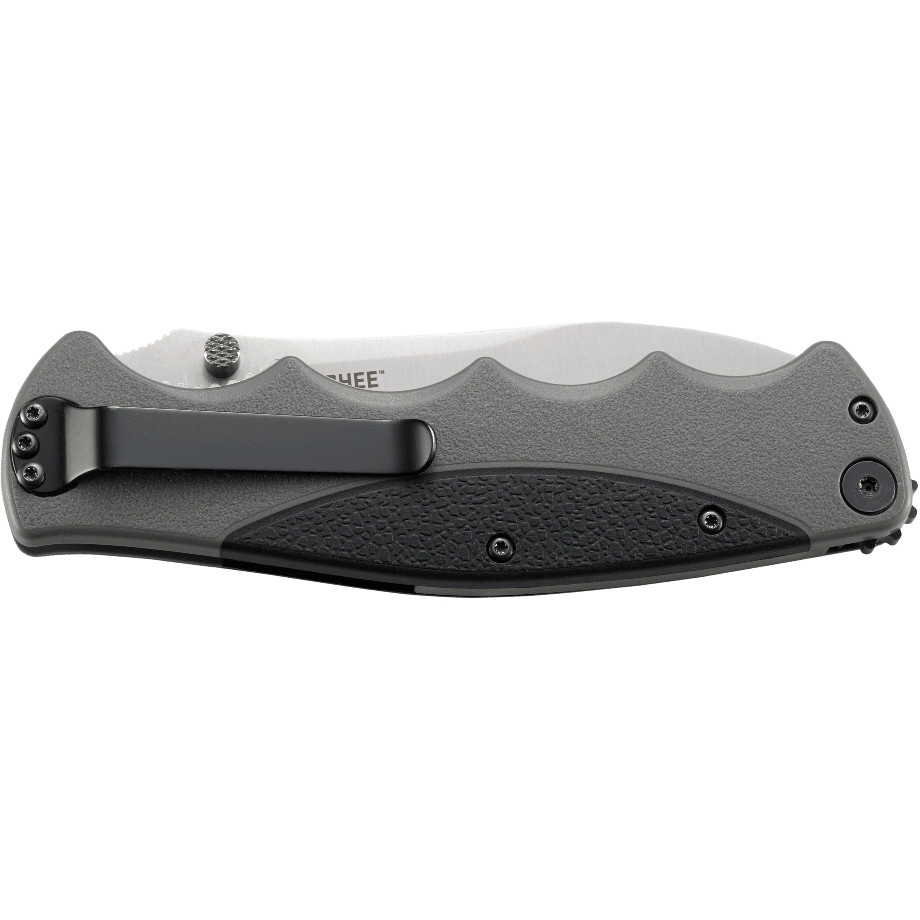 The pocket clip is black, which does contrast nicely with the light gray handle. The clip is kept in place by three dark gray screws which do match the rest of the hardware on the Monashee. The clip is not a deep carry clip, but it does have a slight bend at the end, which will help it stay in place. And even though it is not a deep carry clip, the clip is relatively long for such a large knife, so you shouldn’t’ have any issues keeping it safe and secure inside of your pocket as you move about your day. The clip also tapers toward the butt. It can only be attached on the traditional side of the handle for a tip-up carry, which is a slight disadvantage because it means that this is not going to be an ambidextrous knife.

This is a folding knife that has been equipped with a locking liner as well as a thumb stud to assist you in opening it. The locking liner is the most common blade-locking mechanism, because it is easy to use as well as reliable. This locking mechanism has a side-spring lock that allows you to open and close the knife with a single hand. This is a major benefit when it comes to the tasks that require some serious hands-on work, because you won’t’ need to let go of your project with both of your hands.

This knife mechanism works because when the knife is closed, the spring bar inside of the handle is held under pressure, but when the knife is fully opened, that pressure will slide the bar inward. When it is slide inward, the bar is going to make contact with the butt of the blade, which will keep the blade in place and prevent it from closing on your hands. This lock is reliable, and you won’t have to worry about any of the safety aspects of it.

That being said, locking liners are not the toughest of any locking mechanism and have been known for not standing up tot eh heaviest of tasks. When it comes to your heavy-duty tasks, you should be aware that there are more solid locking mechanisms.

The thumb stud is one of the most common opening mechanisms that you are going to find in the cutlery industry. It allows you to open the knife with a single hand, which is one of the biggest benefits that it offers. This means that you will easily be able to use this knife on those tasks that require both hands and there will be no fumbling with the knife.

The thumb stud is easy to use and easy to get the hang of, which is one of the reasons that so many people love it. It is a simple stud that extends off the face of the blade. You can use your thumb to push against this stud, which swings the blade open and locks it into place.

However, this is also where some of the issues come in with the thumb stud. There are two main issues. The first is not as big of a deal, but some people feel as if the thumb stud does get in the way once the blade is opened. This is because it extends off the blade. Again, this probably won’t’ be an issue for you, just something that you should keep in mind. The second issue is the bigger issue and has to do with the safety of the Monashee. When you use your thumb to swing the blade open, the movement places your fingers directly in the path of the blade. This means that if you aren’t being carefully while you open it, you may end up slicing yourself. This shouldn’t’ be a huge deal as long as you are aware of what you are doing when you are opening the knife.

When CRKT is discussing their newest knife, they say, “For a hunt in an iconic mountain range, only the best will do. This knife’s namesake—the wild Canadian Monashee Mountains—are home to animals that haunt big game hunters’ dreams. With a big-bellied blade and Field Strip, this hunting folder is a pack staple.

Don’t ask Designer Russ Kommer whether he’d rather be hunting or in his Fargo, North Dakota shop designing his next hunting knife—that’s one that’s too close to call. He’s at the top of his game across the board, and the Monashee™ hunting folder is proof. With a long, curved stainless steel blade between a tough, highly-ergonomic thermoplastic handle, it comes up big in the field in front of a felled trophy. An ambidextrous thumb stud sends it into action and a locking liner keeps it in place when you’re elbows deep. If it starts to slow down, Field Strip comes in strong to restore it back to working order.

Track down your next trophy with the Monashee™ by your side.”