When it comes to a CRKT, you already know that you’re going to be in good hands. So, what makes the Onion Foresight any better than their already good knives? Well, actually, quite a bit. This knife is ready to take on any need that you may have, with its modified drop-point blade shape, as well as a black stonewashed blade. Not only is the blade an exceptional blade, but the handle is also made out of glass-reinforced nylon, which is known to be practically indestructible. The Foresight is a quality, durable, EDC knife that can really cater to any of your needs. This knife is not going to disappoint. Read on to find out every last detail about why this knife is just as good as it is.

The blade is the first feature that sets the Foresight apart from the competition. The blade is made out of 1.4116 steel. This is a great steel that is also not crazy expensive. The steel is super tough and is known for being extra corrosion resistant. Both of these qualities lend themselves well to this knife becoming your next favorite EDC. The toughness allows you to take on practically any task that you may come across. The corrosion resistance is a great way to keep the maintenance of this knife low. 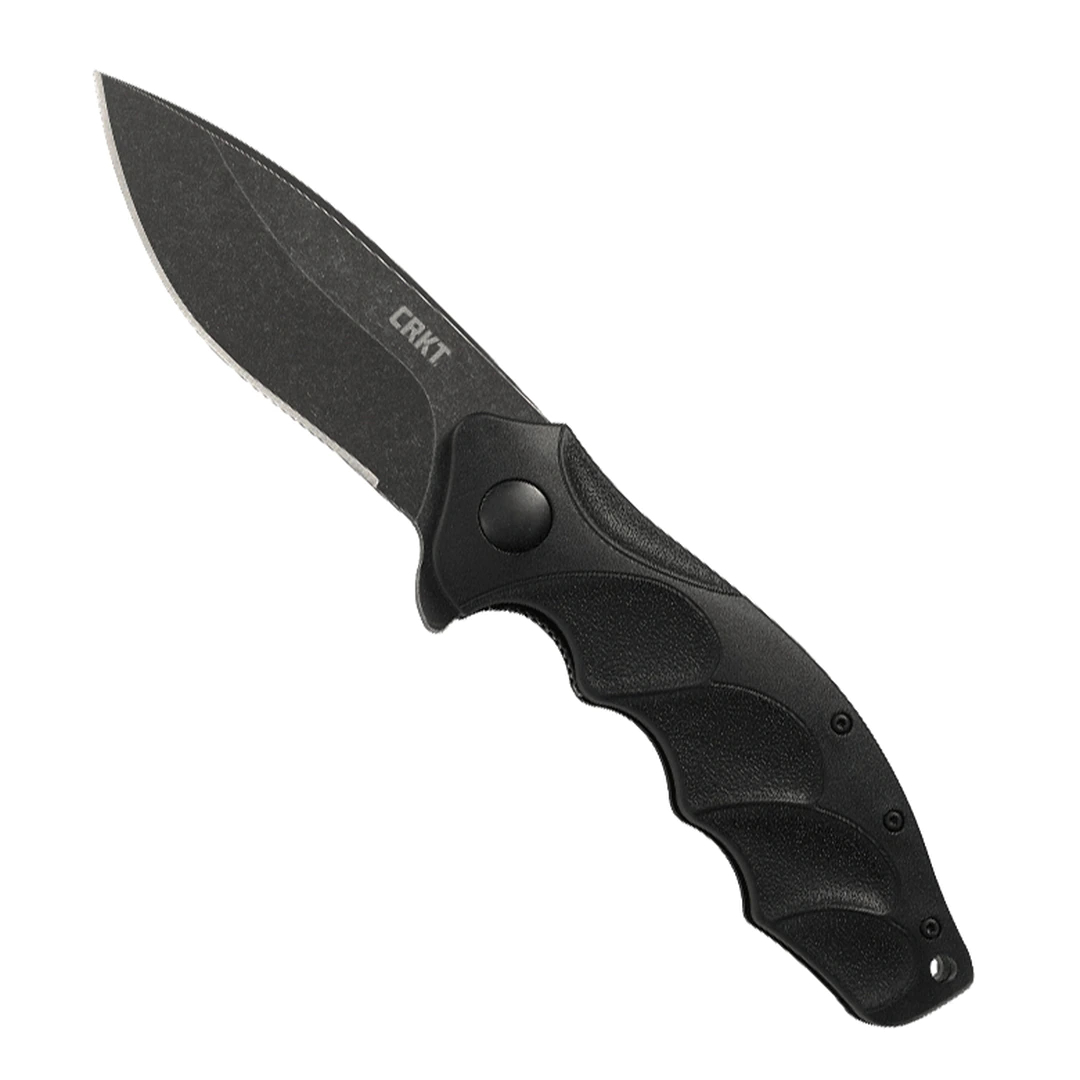 The next characteristic of the blade that is important to go over is the blade shape. The Foresight has been designed with a modified drop point blade. This drop point has a very slight recurve to it, before it curves out very largely and then angles up toward the tip. This creates more surface area within the cutting edge. Added cutting edge is going to equate itself to easier slicing. The tip on this drop point is also a little bit finer than your standard drop point, which means that while you are still going to have enough durability and toughness, you are also going to have a little bit more in the piercing department. This is a blade shape for an EDC because it really is good in a lot of areas, instead of great at one thing. Because this blade shape does not necessarily have a niche, you are going to be equipped for a wider variety of tasks.

The contoured handle has been made out of glass-reinforced nylon. This material is known for being nearly indestructible, because it has high strength, durability, toughness, wear resistance, and can survive in practically any environment. One of the biggest factors in the strength of this handle material is that each of the nylon fibers are arranged completely haphazardly. This means that it is strong in all directions, and can be stressed in all directions, without beginning to break apart. Even better, this material is lightweight, which allows this very large knife to be more lightweight. The durability of the handle, partnered with the durability of the blade, means that you can use this as one of the toughest EDCs around, or you could easily use it as your go-to outdoors knife and have just as good of results. There is practically nothing that can do this knife in—it is designed to be seriously tough.

The handle has been contoured for better grip. There are four finger grooves, each getting slightly more elongated and shallower than the previous one going down the length of the handle. These allow your fingers to fit comfortably and keep a secure grip on this knife handle while you are using it. There is also a large finger guard that is going to protect your fingers against accidently slipping and getting sliced.

The CRKT Foresight is an exceptional knife—one that is not going to let you down. In terms of the mechanisms, this knife features the assisted opening innovation along with the IKBS ball bearing pivot system. The IKBS ball bearing pivot system is an opening system that has advanced to the point where there does not have to be any of the large or bulky pieces in the system. Instead, all that is left is the ball bearings. This means that the system is going to be more lightweight than previously, which is important on a knife as large as this one. Further, it is going to allow the knife to continue to open smoothly, time after time, after time, because the system is not going to wear down in the same way that a typical opening system would. This is an ideal innovation to be put on an EDC because an EDC is going to be opened and closed a lot. This is a knife that you are most likely going to be using multiple times a day. If the system wore out, the knife would stick, it would not be as efficient to use, and overall, it would not be as enjoyable of an experience. The IKBS ball bearing pivot system ensures that none of this happens and helps keep you satisfied with your EDC.

This is an assisted opening knife that features a flipper. One of the biggest advantages about an assisted opening is that there are not the strict legal requirements that surround a fully automatic knife, but it is also not just a manual folding knife. The assisted opening mechanism is really in a good, sweet spot for a pocketknife, especially an EDC. The assisted opening mechanism requires you to begin to the opening process, but then the “automatic” function will kick in and open the knife the rest of the way, locking it into place, ready for use. This is a great option for an EDC because it is not as dangerous or finicky as a fully automatic would be, but you can open the knife more easily when you need it. There shouldn’t’ be as much fumbling, which is always an advantage with an EDC.

The flipper feature of the Foresight is also a great addition to this CRKT knife. The benefits of a flipper to trigger the assisted opening mechanism are plenty. First, the flipper does not get in the way like other opening mechanisms do, such as a thumb stud. This means that once the knife is opened, the flipper is out of the way. And actually, this leads into the second advantage of a flipper. Once the knife is opened, the flipper rests in the spot that the finger guard does and elevates the finger guard. This means that the flipper adds an element of safety to your knife. Finally, the flipper is a safer way to open your knife because your fingers are not in the path of the blade when the blade is swinging open. The flipper may have a slight learning curve to it, but nothing that you can’t figure out with a couple of tries.

Lastly, this CRKT knife features a liner lock that can be easily closed with one hand. This is another detail that lends itself well to the knife as an EDC because if you have a task at hand, you don’t have to wait until you are finished to close the knife. You can close the knife quickly and easily with one hand.

The blade on this CRKT knife measures in at 3.53 inches long, with a blade thickness of 0.15 inches. This is a great length for your EDC, because it is going to provide enough length that you can take on a wider variety of different tasks. There is going to be enough cutting edge that you can easily open a box, without feeling like you are sawing for 5 minutes. Plus, it is not so long that you feel uncomfortable if you were cutting a thread on your shirt. Of course, with the thickness, this blade is also going to be durable, which means that you can cut through thick boxes, or even take on those tougher chores that may come your way.

The handle measures in at 5.19 inches long which means that the overall length of the Foresight is going to come in at 8.75 inches. This is a larger knife, especially for an EDC. However, it is the perfect option if you have larger hands, because the bulk of the length is in the handle, instead of the blade. If you don’t have larger hands, this is still a great option for an EDC. In fact, not only is it going to make a great EDC, but you would easily be able to take this with you fishing, camping, or on other outdoor tasks. The knife is durable, it is tough, and it has the size for it.

Of course, with the extra size also comes extra wight. The Foresight weighs in at 6.2 ounces. This is slightly on the heavier side, but without the GRN handle, this knife would be a lot heavier. The weight can be an advantage if you are using this in the outdoors, because it will allow you to really put force behind your actions with the knife. As for an EDC, this is on the heavier side. But, if you do choose to have it with you as your EDC, then you can be sure that you will really be able to take on any chore or task that comes your way throughout your day.

The CRKT Foresight does feature a small pocket clip, which will help the knife stay more secure inside of your pocket as you move about your day.

Finally, this knife also features a small lanyard hole in the butt of the handle. This lanyard hole will allow you to constantly have this knife with you, whether you attach it to yourself or a pack that you have with you.

The biggest advantage about the CRKT Onion Foresight is simply how durable and low maintenance it is. The steel that the blade is made out of is known for begin super tough and the handle material is one of the strongest and most durable knife handle materials on the market. Plus, both are easy-going materials that do not require a lot of maintenance. Especially since the blade has been finished with black stonewash finish. The Foresight is one exceptional knife, built to last, built to stand with you.

The CRKT Foresight Assisted Opening folder features a beautiful blade that is ready for all your needs. The 3.5-inch modified drop-point blade has a classy black stonewashed finish, ready to rip through anything that comes your way. It opens smoothly over and over again, thanks to the Assisted Opening innovation coupled with the IKBS ball bearing pivot system. This knife features a glass-reinforced nylon handle, which is designed to fit in your hand like it was designed just for you. You won’t know where the knife ends and your hand begins, this blade will become an extension of your very being. “Hindsight may be 20/20, but with the Foresight you’ll show you can plan ahead when it comes to the right tools.” From the materials, to the design, to the attention to detail, CRKT’s Onion Foresight Assisted Opening Folding Knife with a black stonewashed blade is not going to let you down. Order yours today from BladeOps.