CRKT has been a reliable American company since 1994. Over the past two decades, they have developed a fantastic reputation based on their knife designs, the selection of knives that they offer, and the quality of those knives. CRKT puts innovations and integrity first, because they want to be known for building products that can inspire and endure. They have been working with integrity since the very beginning. This means that they build products that are can perform reliably whether you are using it for work, fishing and hunting, tactical, survival, or any other need.

Working with integrity also means that CRKT will deal with their customers honestly, letting you know that they respect and cherish you. They also want to put innovations first, and to do that, they try to bring useful technological advancements and entirely new product concepts to market. To achieve this purpose, CRKT has collaborated with many of the world’s best knife designers and the best knife makers. Out of these collaborations have been born some of the most innovative and ground breaking technological advancements that are in the knife community. Some of these innovations include the Automated Liner Safety System, the IKBS Ball Bearing Pivot System, and the OutBurst Assist Opening Mechanism.

One of their 2019 releases is called the Pilar large and is what we’re talking about today.

The man behind the knife is Jesper Voxnaes. In his bio on the CRKT website, they say, “When Jesper needs to test a design, he only has to step into his own backyard. The harsh elements and conditions of the fjords and forests in his native Denmark do the rest. When he was starting out, no one was making the kind of knives he wanted to design so he learned by trial and error. Apparently his efforts paid off given his IF Award in 2013 for one of the Top European Designs. Now he creates and uses knives like the Amicus® as he sails, camps, and drives off-road. Which is more often than not.” 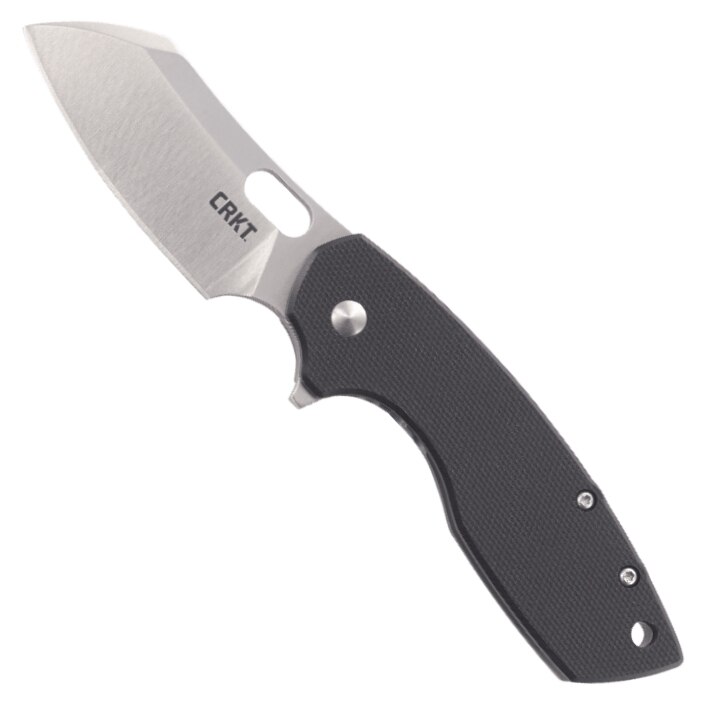 That being said, this steel is crazy corrosion and stain resistant. This will help cut down on maintenance time some. The biggest thing that this steel can offer is the incredibly cheap cost. It reduces the cost of the overall knife considerably.

The blade has been finished satin. This is the most common blade finish that you are going to come across in the cutlery industry. This is because it gives the blade a classic look and is not too hard to create. The manufacturer just has to repeatedly sand the blade in one direction with an increasing level of a fine abrasive. This abrasive is normally a very fine sandpaper. This works to showcase the bevels of the blade as well as showcasing the fine lines of the steel, which is where the classic look comes from. The blade is not too reflective or too matte, it is just right for not stealing the show, but for still looking fantastic.

The blade is incredibly tough because of the shape. The spine has a slight curve in it, but ti is incredibly thick, which adds to the strength. At about 7/8ths of the way up the knife, the blade curves downward to the point. The belly is large and rounded, which is perfect for slicing things. The point is tough, because of how broad it is. However, it is so broad that you are not going to be able to pierce with it at all.

The handle is made out of G10 on this knife. G10 is a manmade material that is known for being tough and durable, as well as lightweight. It is incredibly strong, but it is not resistant to breaking. One of the disadvantages of G10 is that all of the fibers in it are arranged in the same direction, so when stressed or bumped in other directions, it can break or crack.

One of the great advantages of G10 is that it can handle a lot of weather because it is not going to rust or corrode. G10 is so low maintenance, so if you are out in the filed with this, you won’t have to worry about cleaning.

The handle shape is pretty extreme, just like the blade. The spine of the handle curves upward before it curves down to the butt. The butt is slightly curved, but not dramatically. The belly of the handle is where things get intense. There is a finger guard, but it is enhanced by the flipper when the knife is opened. The finger guard is pretty dramatic and deep, which will give you a better grip as well as adding comfort to your grip. After the finger guard, the belly just goes straight to the butt.

The pocket clip on this is a two position clip that allows for tip up or tip down carry options. The clip is silver that matches the stainless steel handle. The clip is straight down and not tapered, but the end of the tip flares up. It is kept in place by two silver screws which do match the rest of the hardware. The clip is not a deep carry clip.

The Pilar is equipped with a thumb slot and a flipper to help you deploy it. For safety, ti locks up with a frame lock.

The Pilar does use a flipper mechanism to assist the user in opening their knife. The flipper is a piece of the blade metal that extends out of the spine of the handle when the knife is closed. The user can pull back on this extension, which will help flip the knife out of the handle and lock into place. The flipper on this knife is skinnier than your average flipper as well as being larger. Once the knife is opened, the flipper is set into place to work as a finger guard. Many people are fans of the flipper because it does not get in the way once the knife is opened, because it does protrude out of the blade, like a thumb stud does. People also love the flipper because it is an ambidextrous opening mechanism. The last reason that people love the flipper mechanism is for safety reasons. Unlike a thumb stud, the flipper keeps your fingers out of the path of the blade when you are opening and closing this knife. This means that you won’t have to worry about slicing your fingers when you are opening your knife. However, the flipper does take a few practices to get used to using this mechanism.

The knife also has a finger window, which is a large cut out near the spine of the blade. This allows you to get a better grip to swing the knife open where it locks in place. The benefit of a finger window is that it is ambidextrous—you can access it from either side of the blade. And, it does not get in the way when the blade is opened.

The frame lock is one of the sturdier locking mechanisms that you are going to come across. This is because the frame is made out of the two handle plates, which are most commonly metal. You know that because there is a frame lock, the Pilar is going to be able to take on some of those tougher tasks. You can rely on the frame lock to not close on your fingers when you are in the middle of using it, or to fail and spring open when you are not using it. Really, with the frame lock, you are as safe as you can be.

The blade on this large Pilar measures in at 2.669 inches long with a blade thickness that measures in at 0.147 inches. The handle and closed length measure in at 3.998, which creates an overall length of 6.688 inches long. The Pilar weighs in at 3.8 ounces.

When CRKT discusses this knife, they say, “Where minimal design meets maximum utility. The Pilar® is a compact everyday carry folder with distinctive minimalist design and an epic tale behind its name. It’s low profile and understated when tucked away, and carefully designed to punch above its weight when in use.

Jesper Voxnaes designed the Pilar® in his Logstrup, Denmark shop, and named it after Ernest Hemingway’s beloved boat—the 38-foot long vessel that he used for renegade surveillance of German U-boats during WWII in Caribbean waters. The world-famous author was also a WWI combat vet, big-game hunter, sailor, and fisherman, and certainly would have selected an everyday knife companion like the Pilar® for his daily endeavors.

The hardworking blade features a satin finish and the strong tip is useful for more detailed tasks. One side of the handle is built with G10 while the other is stainless steel, making it easy to clean and super durable. It’s deployed with a thumb slot opening option as well as a flipper mechanism and is secured with a frame lock for your safety.

The modern Hemingway is the ultimate Renaissance man, and the Pilar® is the knife that will stand up to the challenge.”

This knife is soon to hit BladeOps shelves, but until then, shop all CRKT brand knives here.