The creative part of the CRKT scribe is that it is an everyday carry fixed blade knife, but, instead of a sheath, the Scribe has a “cap,” like a pen. This is a great everyday carry knife because it doesn’t necessarily jump off the page as looking like a knife. This means that you can feel a little bit more comfortable having it with you throughout the day, knowing that it doesn’t look as aggressive as a different EDC would. This is a tiny knife—it is super lightweight, and it is not that large, all of which lend themselves to being more discreet than your typical EDC would. Really, this is the ideal EDC for people who want a knife with them to do simple tasks, but don’t want to have a crazy large, or aggressive looking, knife with them. Read on to see just why this is the perfect knife for the corner office.

This fixed blade is meant to get smaller jobs done, such as opening boxes or trimming threads, which is why 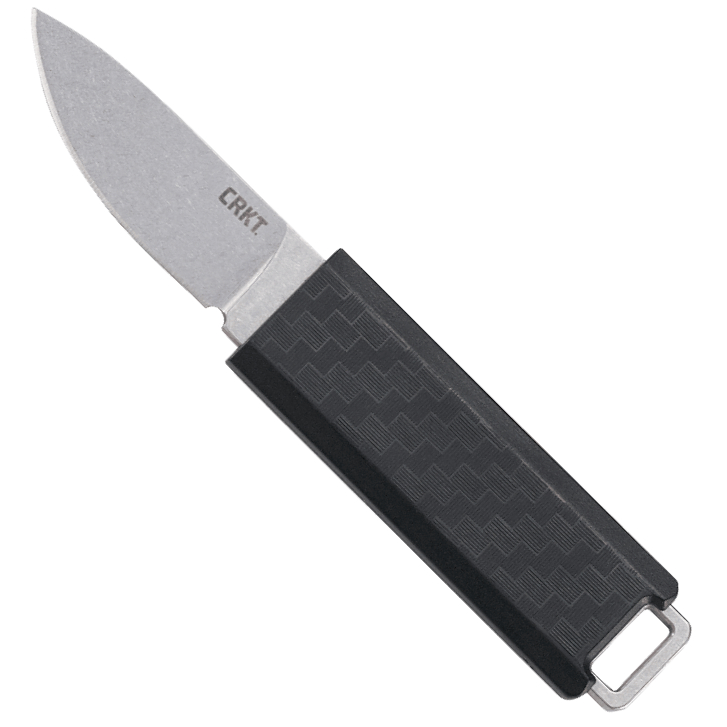 5Cr15MoV steel was the perfect option for this blade. First off, this is a stainless steel, which is a great option for this knife. You definitely don’t want to have to do a lot of maintenance for a knife such as this one—one that will only be doing smaller tasks and really not getting dirty. With this steel, the blade is going to keep looking good when you use it, with very minimal maintenance. This knife steel is as resistant to rusting and corrosion because it has high amounts of chromium in the metal. The chromium is also going to increase the wear resistance, which also means less maintenance and an easier time when you are using the knife. Plus, chromium even helps with the strength on the knife, so even super thick boxes won’t stand a chance against the Scribe. 5Cr15 steel is also pretty hard, which means that the edge will be sharp, and it will last a long, long time. This is perfect because with a knife like the Scribe, one that you are going to be using around the house and the office, but not one that you are going to be doing any heavy-duty chores, you don’t want to have to worry about it dulling. You just want to be able to whip it out, get the job done, and put the knife away again. 5Cr15MoV steel is the perfect option for this knife because it allows you to get the job done, but also to not really ever think about the knife except when you are using it.

To even further cut down on maintenance, the blade has been finished with a stonewash. This finish is created when the steel is tossed around with pebbles until it roughs up the steel. Then, the steel is smoothed out, polished, and used as a blade. However, the textured appearance remains on the steel. The biggest advantage to the appearance of this steel finish it that it hides any scratches or wear-and-tear that is sure to accumulate over the years. The scratches blend right in with the texture, which means that the blade can look as good as new and be nowhere near new.

The blade design is also ideal for that corner-office lifestyle. It is drop point blade shape, which means that it can really do some damage to those boxes that have been accumulating in the corner of the room. The belly is the biggest perk of this blade shape. The belly is large and elongated, curving up to meet the spine in a point. The large belly allows you to easily slice and cut with it, as even though the blade is short, the elongated curve gives you more cutting edge and surface. The spien of the blade is almost entirely straight, which also means that the tip is not going to be super sharp. It is not a false tip, but it is also nothing like a clip point knife is. The tip is sharp enough that you can easily poke it into a box, but not so sharp that you have to be wary of it. Really, the biggest aspect of the blade that is important is the large belly that it sports, as the large belly is going to allow you to take on all of your office needs with no issue.

The handle on the Scribe is super classy. It is made out of glass-reinforced nylon, or GRN. The first aspect of the GRN that is important is that all of the nylon fibers in it have been arranged completely haphazardly. This means that the material is going to be strong in every single direction, instead of just one direction. This is important because it is going to be used fairly frequently around your office—the handle is going to be tough and strong, which allow you to use it constantly, or carry it with you without worrying about it cracking.

Another aspect of GRN is that it is super lightweight. This is important because this is a knife that you are going to want to take with you without really feeling like it is weighing you down. This way, you can easily have it in your pocket, ready for use whenever you need without really thinking about throughout the day.

Finally, GRN is also an inexpensive material, which does keep the cost of the overall knife down. This is important because no one wants to be spending a fortune on an office tool. Even though this knife is an elevated version of an office tool, you still don’t want to be making your wallet too light. By CRKT using GRN on the Scribe, they have eliminated this issue.

The fibers in the GRN have been arranged in a diagonal stripe that goes across the width of the handle. One of the diagonal stripes is darker, one is lighter, one is darker, and so forth. This creates a very elegant, discreet appearance, one that is not always going to be found on a knife. The look to the GRN allows this to look classy and elegant. It’s not going to look like an aggressive knife, it will blend into your other office tools. Or it will look similarly to an elegant pen in your front pocket.

Also, the GRN is textured for your grip. This means that you will be able to hold onto this knife without it slipping. It will be comfortable and convenient.

The handle on this knife is completely rectangular, with a slight roundness so that it isn’t such a harsh tool in your pocket.

The first detail about the Scribe is that the bottom of the Scribe does have a skeletonized piece of metal that extends out of the GRN. This acts as the perfect piece to attach to your keychain or gear bag. This skeletonized lanyard hole will allow you to always have this knife on you without it feeling like a hassle. 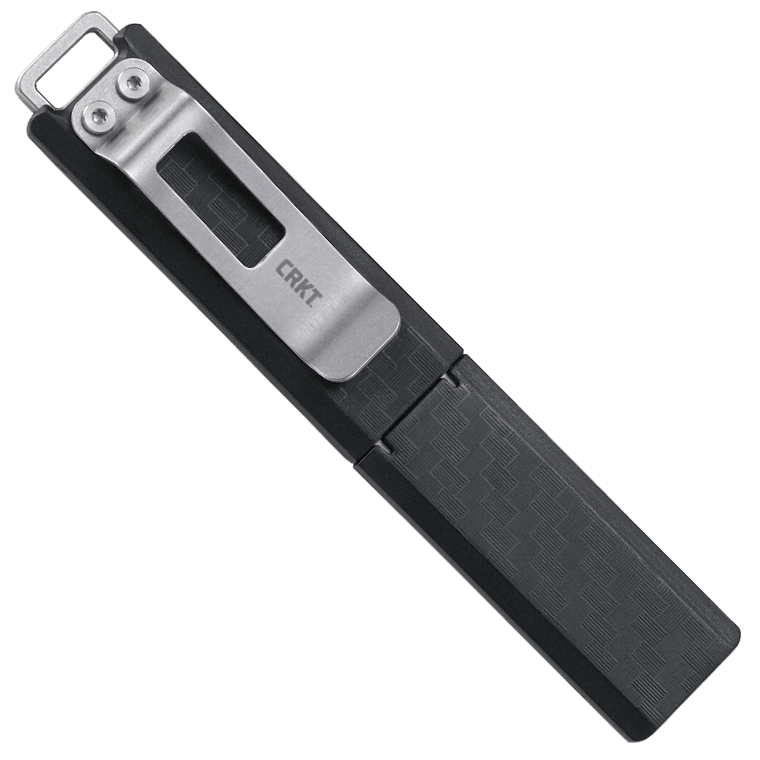 The second detail that I want to focus on is that it does have a pocket clip for your classic carry. The pocket clip does take up most of the width that the actual cap of the knife does, but it is a smaller knife, so the clip isn’t as wide as it may seem. The clip does have a window cut out of it. It is a stonewashed clip, which matches the blade on the knife. This means that all of the accents are stonewashed, which does lead to a consistent aesthetic. CRKT did stamp their logo onto the pocket clip in a darker grey. The pocket clip is thick enough and wide enough that it is going to stay securely in your pocket. This will allow you to have the knife with you at all times without really thinking about having it on you.

This is a fixed blade, which does mean that it is going to be more durable than your traditional folding pocketknife. Of course, this knife doesn’t need to be as durable as it really is. But that’s never a bad thing. Instead of your traditional sheath for the fixed blade, the Scribe comes with a cap. This allows it to be more discreet and appear to be more of a pen than a knife. The cap also provides a classier look, which will go very well with your other office tools.

CRKT discusses the design by saying, “Designer T.J. Schwarz of Boise, Idaho has a signature design move: things aren’t always as they appear. The Scribe tucks perfectly into the lineup with a clean, compact design and a seamless cap that completely conceals the bead-blasted drop point blade. The handle and cp are built of strong thermoplastic and the clip is designed to look like a simple pen clip when tucked into a front pocket.”

The size of the Scribe is one of the biggest advantages to the Scribe. The tiny size allows it to sit discreetly in your pocket without getting in the way and without weighing you down. The blade measures in at 1.74 inches long with a blade thickness of 0.10 inches. This is just big enough that you can easily take on your outdoor tasks. The overall length of this fixed blade measures in at 4.13 inches long, which is the perfect length to fit conveniently in your pocket. This will also fit well on your desk without taking up too much space. Finally, the Scribe weighs in at 0.90 ounces, which is really miniscule.

All in all, the Scribe is the ideal size for the office tool that it is.

The biggest advantage to the Scribe is the size, it allows you to carry this discreet knife inside of your front shirt pocket. If not, then you can easily fit it on your desk without it taking up too much space and getting in the way of your work.

Some of the other advantages are that the blade is very well designed. The blade is made out of quality steel that is tough enough and corrosion resistant. The blade will hold a super sharp edge, so you don’t have to worry about maintenance.

The handle is also an advantage. It is made out of super tough GRN that is tough and elegant looking without weighing down the knife. In fact, GRN is known to be super lightweight.

The Scribe has been designed to look like a pen, so it is super discreet for all of your office needs.

The CRKT Scribe is an everyday carry fixed blade knife that features a cap that functions as a sheath. Just like a pen, pull the cap off and the blade is ready for action—whether you need to pen a package or trim a thread.

The Scribe weighs only 0.9 ounces, so you almost won’t even notice it until you need it. This covert little knife is perfect of your keychain, pocket, or gear bag. It also has a pocket clip for classic carry. CRKT says that this knife is “crafted for the corner office” and really, it is. If you are in the market for a tool that can do a little more than your standard letter opener, but you don’t really need an aggressive knife, look no further than the Scribe.

CRKT says, “Crafted for the corner office. Covert is the name of the game when it comes to the Scribe everyday carry fixed blade knife. Instead of a sheath, this shirt-pocket sized knife slips into a cap with a satisfying click, just like your favorite pen, until its time to slice open a package or trim a loose thread.”

Order yours today from BladeOps.