The Spyderco Autonomy 2 is made specifically for tactical environments where light discipline is a concern. This means that all the materials are all-black, including the LC200n drop point blade with a DLC coating, as well as black G-10 handle scales. All of these materials combine for a sleek and stealthy all-black configuration. Not only is this entire knife black, but it also looks sleek, yet tough. When someone pulls this knife out, you will know that it means business. So, read on to understand how this knife and its materials really work to keep you concealed when you need the extra protection. 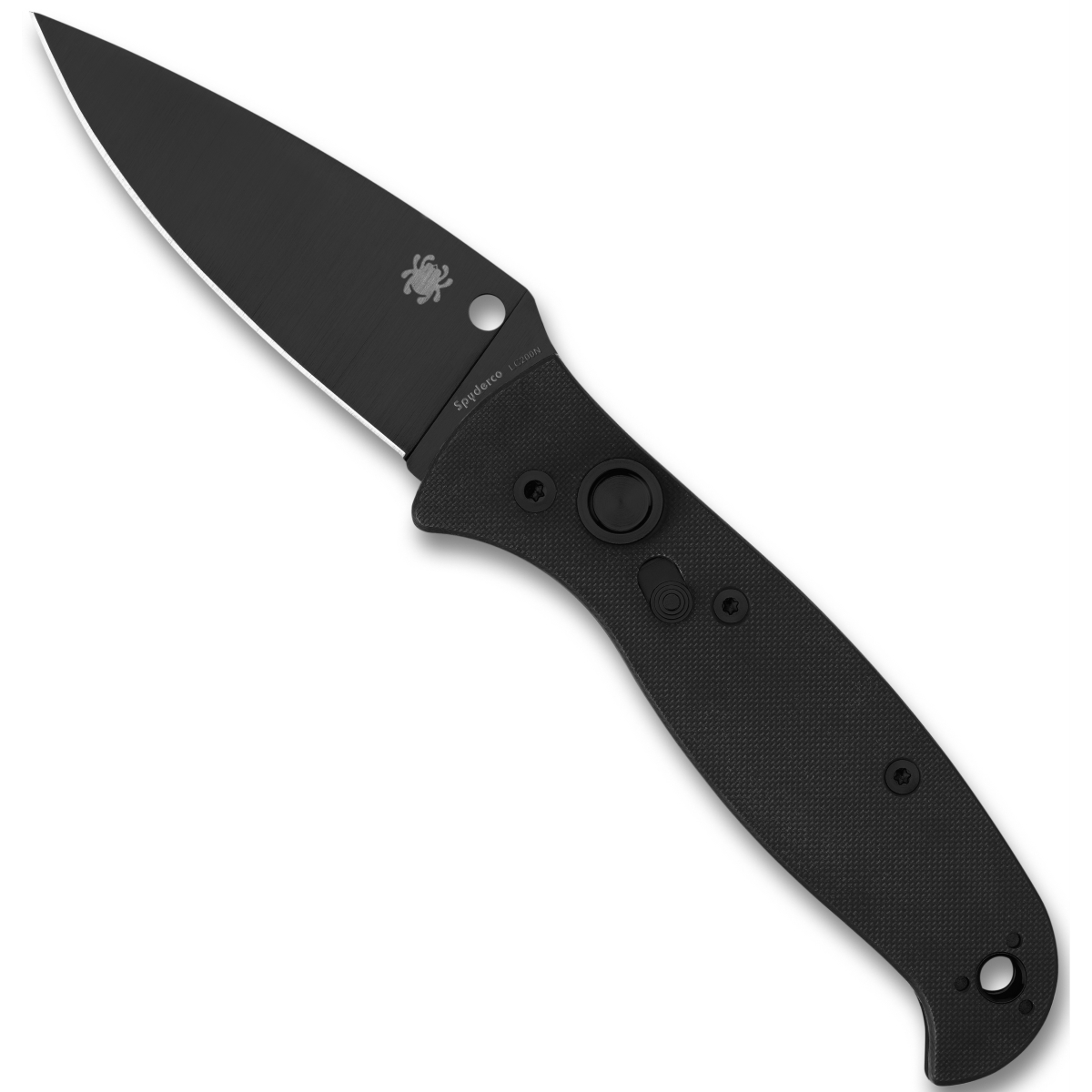 The first part of this excellent blade is that it is made out of LC200N steel. Some of the best advantages of this steel is that it has some of the highest corrosion resistance and toughness, even at high hardness. The corrosion resistance levels are important in tactical situations because you never know what environment you are actually going to be present in. This way, you don’t have to worry about humidity or dryness, or even what material you need to be slicing through. You can simply focus on the tactical task at hand without having to worry about the integrity of the blade. The other important aspect of LC200N steel for a tactical knife is the high levels of toughness that it sports. Toughness is important in a tactical knife because you need to be able to rely on your blade when you are in a tactical situation. With the LC200N steel, you can trust the Autonomy 2 when you need it most.

The blade has been coated with a DLC coating, which stands for a diamond-like carbon coating. This is the aspect of the blade that really elevates this knife and sets it apart as a tactical knife that is specifically useful for light-sensitive environments. The DLC coating is one of the absolute highest quality coatings that you can come across in the cutlery industry. Some of the best qualities are that it increases the hardness and wear resistance of the blade. This is definitely going to come in handy when you are in a tactical situation. If there isn’t enough hardness, you aren’t going to be able to fully trust your knife. However, the part of the DLC coating that is the most crucial to this knife is how black it is. The DLC coating is known as being pitch black, the darkest black that you are going to find in a blade coating. This is important because one of the most important characteristics of this knife is that it is ideal for light-sensitive tactical scenarios. Without the DLC coating, this knife would not fit under this description. With the DLC coating, you know that you can rely on this blade for not giving you away in a light-sensitive situation.

Of course, the Autonomy 2 features Spyderco’s signature round hole. It wouldn’t be a Spyderco without the hole.

G-10 is type of fiberglass that has similar properties to carbon fiber. To create this tough material, the manufacturer will layer fiberglass cloths, soak them in resin, compress them, and then bake them. This creates a crazy tough, hard, and strong material. The benefits of having these qualities in a tactical knife are pretty obvious. But once again, these qualities lend themselves to you being able to completely and totally rely on this knife almost no matter what situation you find yourself in. These handle scales will be able to really take a hit without breaking and can withstand some serious force. Better yet, you get all of these qualities without the handle scales having a lot of weight. This means that you can easily take this Spyderco knife with you on any tactical mission, because you won’t have to worry about being weighed down. In fact, the overall knife weighs in at 5.6 ounces, which is hardly anything.

The black G-10 has been heavily textured so that you have a solid grip in almost any environment. Even in wet or slick environments, you will be able to keep a sturdy hold on this knife. The texturing covers the entire handle scales, which means that no matter which part of the knife you have a grip on, you will be able to have a secure grip on it.

The black handle has also been ergonomically designed so that you can have a secure and comfortable grip on this Spyderco. The spine of the handle has a slight curve which will fit comfortable in your grip. The belly of the knife has a slight finger guard that will protect your fingers form some slipping. However, this finger guard is mostly there to keep your grip even more secure on this knife. There is a belly bulge which will relieve some of the stress from your hands while you are holding it. The butt of the handle features a medium-sized lanyard hole. This is useful in tactical situations because you can easily attach it to whatever gear you are wearing or brining with you.

The combination of the extreme texture, ergonomical grip, G-10 qualities, and most importantly, the G-10 being black result in an exceptional handle that will support you in practically any tactical situation, even if it is light-sensitive.

This is an automatic knife, which does mean that it is not going to be legal in all states, regions, or areas. It is important that you, the user, are aware of the local laws before you choose to use this knife. With the legality of this knife aside, automatic knives have a lot of advantages, especially with a tactical knife. The first advantage to this tactical knife being an automatic knife is that it is going to deploy fast. This means that nearly the second that you need it, you are going to be able to have it open, locked, and ready to use. This is crucial in situations where every second counts. Plus, specifically with the Autonomy 2, you are likely to be in light-sensitive areas. This means that you won’t have to fumble around trying to figure out how to open the knife or flick it open. Instead, all you have to do is locate the button, press it, and your blade is ready to go. The other major advantage to having an automatic tactical knife si how smoothly it is going to open. When you press the button, you can rely on the Autonomy 2 to swing open without any hitches.

The first and foremast advantage of the Spyderco Autonomy 2 is that it is all black. And not just all black, but a deep, dark black that is not going to reflect light. One of the biggest features of this knife that lends itself to such a dark appearance is the DLC coating on the blade. This coating adds strength, corrosion and wear resistance, and even makes the blade tougher, all while being pitch black. There are not going to be any reflections off of this blade. This means that not only are the qualities and features of this knife perfect of your tactical knife, but the all-black means also that this can be a tactical knife in light-sensitive situations. You won’t have to worry about this knife being stealthy—it just is stealthy by design.

The DLC might steal the show in terms of the blade features, but the rest of the blade is nearly just as high quality. The blade is made out of LC200N steel, which is known for its high hardness and corrosion resistance. Both of these qualities mean that you can be in practically any environment and you won’t have to worry about whether or not this blade can last it just can. Plus, although the drop point blade shape is a common one, that doesn’t make it any less useful. The drop point blade shape on this knife is designed to allow you to perform the maximum number of tasks with the highest ability possible. The drop pint blade doesn’t necessarily focus on anything specific like certain other blade shapes. But it allows you to perform a larger variety of tasks. This translates into being an excellent option for your tactical blade, because you aren’t just going to be doing one task with it—this knife is going to be your go-to tool, which means that it needs to be able to meet your expectations. And it does.

The handle is no less of a showstopper. Made out of all black G-10 handle scales, you can blend into the shadows well, while also knowing that your knife can take a beating. G-10 is known to be incredibly strong and trough, so you don’t have to worry about what it can or cannot do. You can just act. Plus, the G-10 has been textured across the entirety of the handle scales, which means that your grip will not be lacking either. Pair this handle with a left/right reversible clip that has been finished with a non-reflective black coating and you almost can’t beat this knife.

This automatic knife was made in the United States of America, which means that you can trust it to get the job done right.

The Autonomy 2 worked off the great base of the Autonomy 1, taking the patented design features and working them into a knife design that is ideal for everyday utility, or the perfect stealthy all-black knife that is perfect for your tactical missions. This Spyderco features an LC200N drop pint blade that has been finished with a black DLC and paired with black G-10 handle scales for a sleek and stealthy all-black configuration. The push button automatic knife ensures that the blade is going to snap out with authority and lock into place, ready for use the moment that you need it most. When you are in a tactical situation, your knife of choice cannot fail you, and with the Autonomy 2 behind you, you won’t fail. Better yet, all the hardware, including the liners and clip are also finished with a non-reflective black coating, ensuring that light reflection won’t be an issue with this knife. The left/right reversible clip ensures that this tactical knife is going to be the most comfortable that it can be for each induvial user. If you are commonly in tactical environment where light discipline is a concern, there is no better choice of knife than the Spyderco all-black Autonomy 2. This knife features the stunning aesthetic expression of one of Spyderco’s most dynamic models. Get yours today at BladeOps.