This company was founded by Sal Glesser. The first product that Spyderco produced was called the Portable Hand in 1976. This product was a spider-shaped device, with a series of angles, ball joints, and alligator clips that was able to help certain hobbyists such as jewelers work with their small parts. Spyderco’s Founder, Sal Glesser, and his wife Gail, converted an old bread delivery truck into a motorhome and traveled to shows. As they became more successful, they graduated from the bread truck to a truck and trailer. They settled in Golden in November 1978.

Spyderco began producing knife sharpeners in 1978 and produced their first folding knife, the C01 Worker, in 1981. This knife was the first to feature a round hole in the blade designed for fast, one-handed and ambidextrous opening, which you all know is now the company’s trademark. Additionally, the company also claims that this was the first knife to feature a pocket clip on the right side of the handle.

A large part of Spyderco knife production is outsourced to foreign contractors in countries such as Japan, Taiwan, Italy, and China. However, many of their flagship knives are made in the US. Knives made with CPM S30V steel were previously all made in Golden, Colorado, but Spyderco began shipping this steel to Taiwan to have their highest end knives produced there using this steel.

Today we will be discussing the Spyderco Drunken Carbon Fiber folding knife.

The blade on this Spyderco knife is made out of CPM-S90V steel. This is a super-premium stainless steel that can be hardened to a 59-61HRC. According to Crucible Industries, the maker of this steel, “CPM-S90V is a unique tool steel made by the Crucible Particle Metallurgy process. It is a martensitic stainless steel to which vanadium and carbon have been added for exceptionally good wear resistance. This steel offers substantial improvements in wear resistance over 440C and D2, and other high chromium steels, with corrosion resistance equal to or better than 440C. CPM S90V’s high vanadium content favors the formation of hard vanadium carbides instead of chromium carbides for wear resistance, leaving more free chromium available to provide corrosion resistance. The wear and corrosion resistance of CPM S90V make it an excellent candidate to replace 440C, where increased wear is a primary concern.”

The carbon content is very high, but like Crucible mentioned, it’s the quantities of vanadium that really set this blade apart. The quantities of vanadium are almost three times the amount that you are going to find in their other steel: S30V or even Elmax. This steel is going to be very expensive, but you get what you pay for and it is completely worth it. One of the drawbacks is that it is going to be hard to sharpen. Luckily enough, it holds an edge for long periods of time. 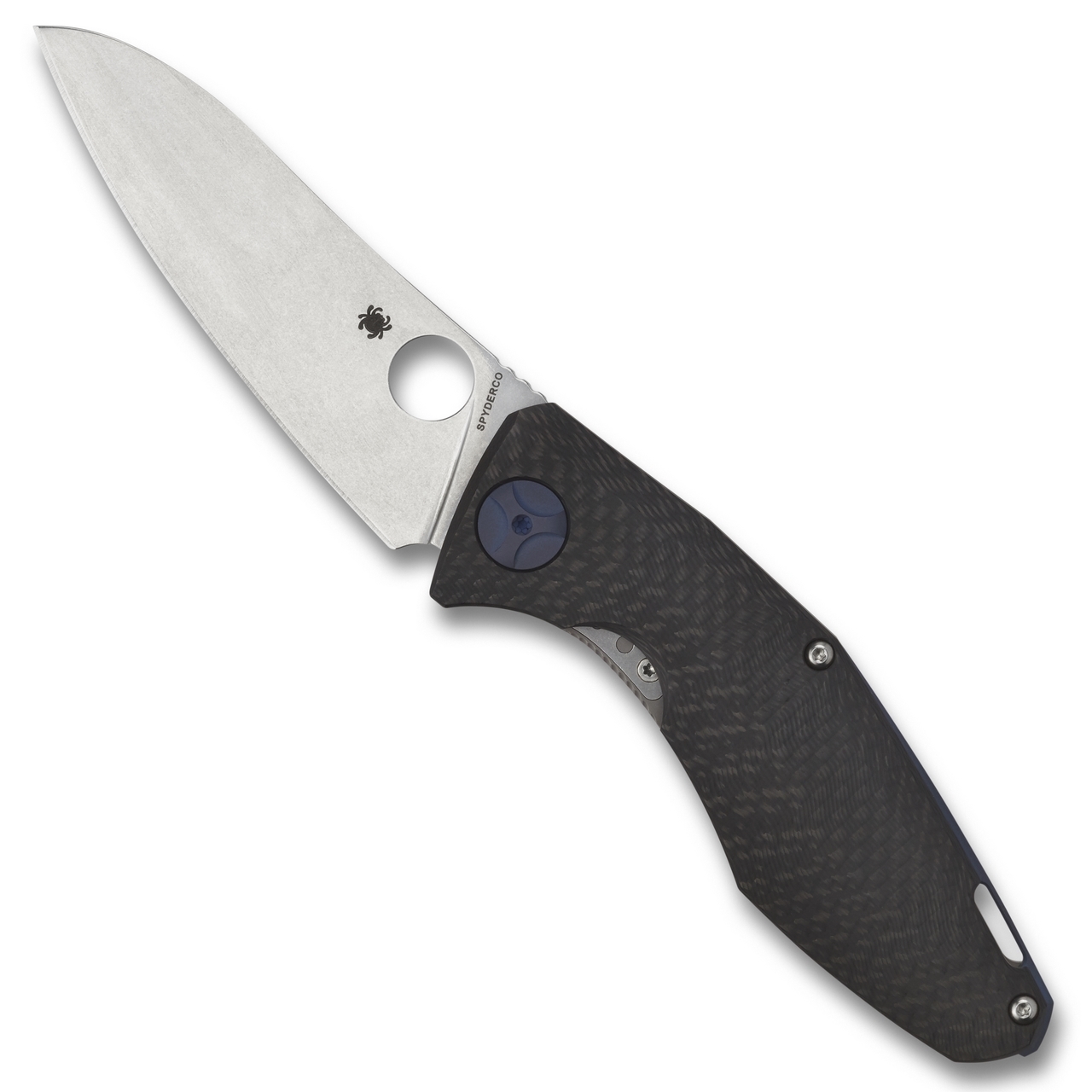 This knife has been finished with a satin finish. This is the most popular finish on knives in the market today, because it offers you such a traditional look. This finish makes it so that the blade color doesn’t steal the show—it blends in, but in a good way.

This finish is very medium in terms of luster—the mirror polish finish is definitely more reflective than this finish and it is not as matte as a stonewashed finish. This finish is created by repeatedly sanding the blade in one direction with an increasing level of an abrasive. This means that the sandpaper used to sand the steel will continually get finer and finer. The resulting metal shows of the bevels and the fine line in the steel exceptionally. The satin finish is a classic and will never go out of style.

The blade has been carved into a modified drop point blade shape, which is one of the two most popular finishes in the cutlery industry. The shape is created by having the spine of the edge go from the handle to the point in a slow curving manner. The modification on the drop point on the Drunken Carbon Fiber folding knife is that instead of the long, continuous curve, the spien of the blade actually curves down into the spine before popping back up.

The curve of the spien still creates a lowered point, which is what is going to give you so much control over your cuts and slices. This is also where the blade shape gets its name from, because it is lowered, or “dropped”.

The point is not only lowered, but also wide, which is what is going to give you the extreme strength from this knife. The broad tip allows the knife to take on tougher tasks, which is what makes the drop point blade shape a great option for a survival or tactical knife. Because the tip is broader, it is able to withstand things that the other blade shapes would not be able to.

The drop pint knife is also very versatile, because of the large belly that makes slicing a breeze. The larger the belly, the easier it is going to be to slice.

The drop point blade shape really only has one drawback, which is because of the broad point, it is not going to be super capable of piercing and stabbing. This usually isn’t’ too big of a drawback, because you do get so much extra strength from the broadness of the tip.

Carbon fiber is a material that is made out of thin strands of carbon that heave been tightly woven together and then set in a resin. This material is crazy strong, expensive, but still lightweight. It does also suffer from being brittle. This is because all of the fibers have been arranged in a single direction. While it is immensely strong in that direction, it is going to begin to break apart when it is stressed in other direction. This means that it is going to crack if it subjected to hard or sharp impacts.

The carbon fiber on the front handle scale has a weave that has the light reflect in a pattern that follows the top center of the knife. The reflective bits aren’t in a straight line but have some curves to them. This is part of the texture where the knife got its name from.

Titanium is one of the rare metals that has a warm feel to it, which means that if you live in a colder environment, it is not going to make you suffer. This is a sturdy material. Unfortunately, the extras sturdiness and strength does make it harder to machine, which is going to make it a more expensive metal and handle.

The titanium handle scale has also been textured. Again, this is more of a wavy texture, which again leads to the name of Drunken. The titanium is a darker grey, which goes well with the black G-10 and the navy/black pocket clip.

The handle is pretty simple, although it does sport some unique looks. The spine of this knife angles up to the middle before coming down again. This creates a sharper look, which contrasts with the wavy texture on the handle scale. The belly of the handle has a shallow, elongated finger groove that starts with a small finger guard. This will help you hold the handle in a more comfortable manner. After the finger groove, the belly does angle back toward the butt of the handle.

On the spine of the handle, there is a carved-out portion which becomes an elongated lanyard hole.

The pocket clip is anodized blue titanium that has been statically designed for tip up carry only on the traditional side of the handle.

This is a folding knife that has been equipped with a signature round hole, a frame lock, which is sometimes known as the Reeve Integral Lock.

Spyderco says that one of the most common questions they get form people that are new to Spyderco knives is “Why the Round Hole?” They say that the Round Hole allows the blade of a folding knife to be swiftly and easily opened with only one hand. This feature is revolutionary for folding knives and was granted a U.S. utility patent in 1981. This feature also helped them define the form of the modern folding knife. They say, “Unlike thumb studs, disks, and other one-hand-opening attachments, the hole offers a larger surface area for greater reliability and does not interfere with the cutting action of the blade. An iconic symbol of our brand, the Trademark Round Hole™ also serves as a user-friendly alternative to a traditional nail nick in our two-hand-opening folders and a proud expression of our brand identity in our fixed-blade knives.” This means that not only does it represent the brand, it is also extremely useful. It does not get in the way like a thumb stud might and it is easier to use than the more common flipper.

Frame locks are specifically known for their strength and thickness, which means that the Drunken is going to be able to take on even the toughest of tasks. You will not have to worry about it closing while you are using it.

This is known as the Reeve Integral Lock sometimes, because Chris Reeve is the man who first created this locking mechanism. The first knife that it was used on was the Sebenza folder that was released in 1990. Since then, the frame lock has increased in popularity because people know how reliable and strong it is going to be.

The Drunken Carbon Fiber folding knife weighs in at 3.8 ounces, which is an ideal weight for a knife that you want to have with you each day. The best range is somewhere between 3 and 5 ounces, because it is that span that is going to provide you with the strength and heft that you want to have without actually weighing you down. Any heavier than five ounces can start to feel like a burden while you have it in your pocket. As you can see, the Drunken comes in at the middle of that range.

Named after the "drunken" texture of both handle scales, the Spyderco Drunken, designed by Dmitry Sinkevich, is the latest release from Spyderco. Each model features a premium stainless-steel blade that is supported by Spyderco's Reeve Integral Lock (R.I.L.) which utilizes a lock bar that is integral to one of the handle scales while the enlarged thumb hole allows for effortless deployment. This model features a carbon fiber front handle scale, a titanium rear handle scale, a modified drop point style blade in a satin finish and the blue anodized titanium pocket clip is statically designed for tip up carry only on the traditional side of the handle.

This Drunken knife is available at BladeOps. To get yours ASAP, click here and order today.