This company was founded by Sal Glesser. The first product that Spyderco produced was called the Portable Hand in 1976. This product was a spider-shaped device, with a series of angles, ball joints, and alligator clips that was able to help certain hobbyists such as jewelers work with their small parts. Spyderco’s Founder, Sal Glesser, and his wife Gail, converted an old bread delivery truck into a motor-home and traveled to shows. As they became more successful, they graduated from the bread truck to a truck and trailer. They settled in Golden in November 1978.

Spyderco began producing knife sharpeners in 1978 and produced their first folding knife, the C01 Worker, in 1981. This knife was the first to feature a round hole in the blade designed for fast, one-handed and ambidextrous opening, which you all know is now the company’s trademark. Additionally, the company also claims that this was the first knife to feature a pocket clip on the right side of the handle.

A large part of Spyderco knife production is outsourced to foreign contractors in countries such as Japan, Taiwan, Italy, and China. However, many of their flagship knives are made in the US. Knives made with CPM S30V steel were previously all made in Golden, Colorado, but Spyderco began shipping this steel to Taiwan to have their highest end knives produced there using this steel.

Today we will be discussing the Spyderco Efficient, which is one of their newest releases for 2019. This knife is going to hit BladeOps shelves soon, so you will be able to purchase this one soon.

The blade on this knife is made out of 8Cr13MoV steel. It is generally accepted that 8Cr13MoV steel is almost the equivalent of AUS8A steel. This is true. For an EDC knife such as the Efficient, even a hardcore knife lover would be hard-pressed to tell the difference between a well-made 8Cr13MoV blade and a well-made AUS8A blade. Of course, when it comes to heavier duty knives, that is where the differences show. Just because they are similar, does not 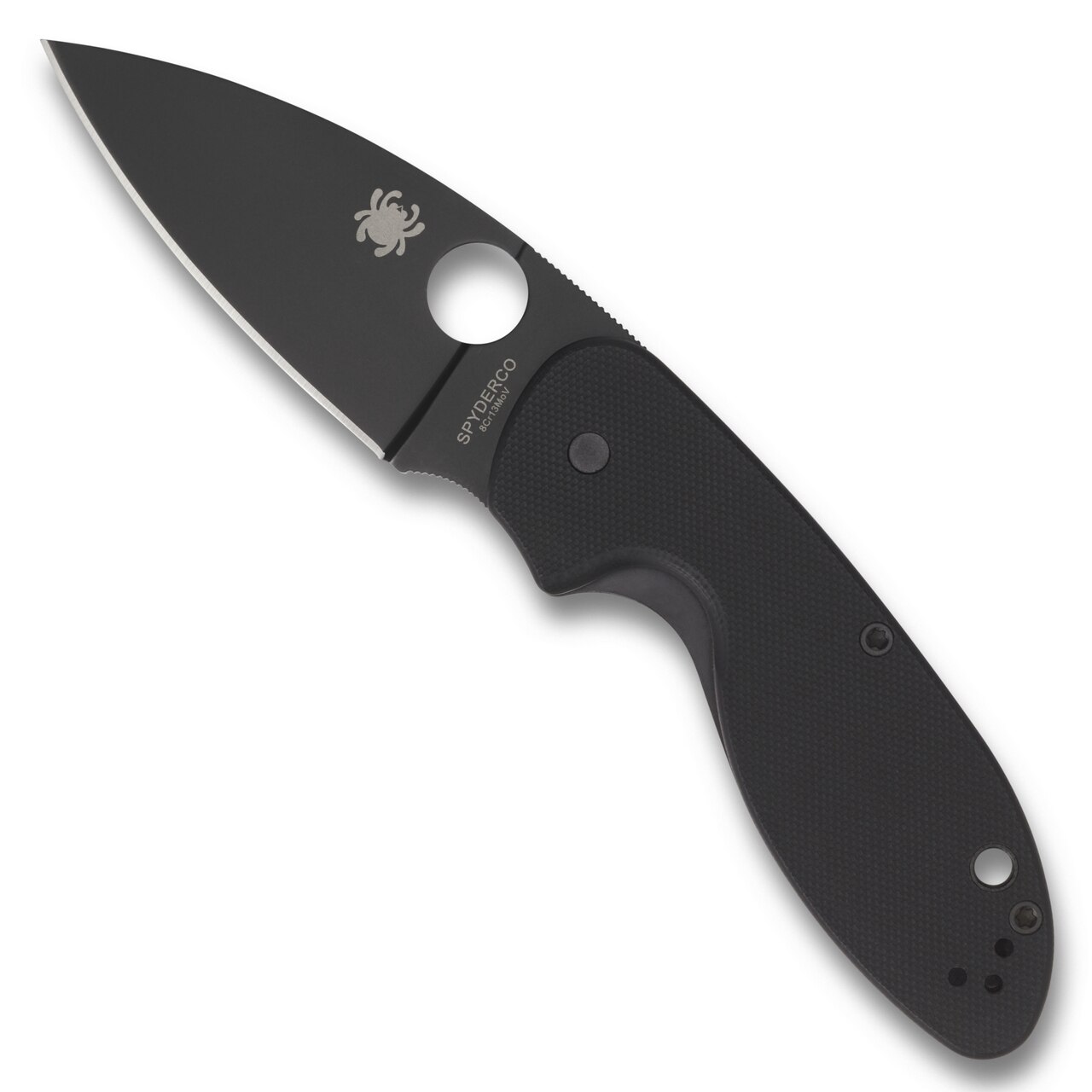 mean that there are no differences.

For starters, 8Cr13MoV steel does have slightly more carbon which is going to add in hardness and wear resistance. 8Cr13MoV steel also has slightly less nickel. The key to blade performance for this steel is the manufacturing quality. This is a top-of-the-line Chinese steel that is going to significantly reduce the cost of the blade and give you great value. The steel has been hardened to a HRC 57-59.

The blade has been coated with a black oxide finish. A coating serves a variety of purposes on a knife blade and the first and most important is to prevent corrosion. A good coating can greatly reduce maintenance time on a knife, which comes in handy in many situations. Plus, a coating eliminates any shiny surfaces. While you probably won’t be using this knife on a mission, since it is an everyday knife, that characteristic is not as important as it could be, but it does still serve its purpose.

The coating, especially a black coating, gives this blade a very sleek look. Unfortunately, with coated blades, the coating will sooner or later come off. And while you might think it looks cool to have a beat up blade, the coating will not provide those quality benefits that it once did. One of the disadvantages about this knife is that it is a black oxide coating which is actually the lowest quality of coatings that you can find. It will serve its purpose, but it is going to scratch off with heavy use. Maybe stick to the everyday basics with this one.

The large belly is going to make slicing much easier, equipping you to take on a plethora of tasks.

There are two versions of this blade, you can either get it with a PlainEdge or a CombinationEdge. The plain edge is a sharpened knife blade with no serrations or teeth. This style is sometimes referred to as a smooth blade. This one is easier to sharpen and easier to get a fine edge on it. However, it cannot always take on the tougher tasks that you may encounter.

The CombinationEdge is blade that is partially PlainEdge and partially SpyderEdge at the cutting edge. This gives you the best of both worlds. You can use the plain portion for detail work and the serrated portion for the tougher things that you encounter.

The handle on this knife is made out of black G10. This is a material that is made out of fiberglass. To make the material, the manufacturer takes layers of fiberglass cloth and soaks them in a resin. The next step is to compress them and bake them under pressure. This creates a very tough, hard, lightweight, and strong material. This is a very similar material to carbon fiber, but it is inferior and can be had for almost a fraction of the cost. The overall pros to this knife handle material is that it is going to be tough, light, and durable. Unfortunately, it is also brittle and some people feel like it lacks elegance.

The pocket clip can only be attached for tip-up carry, but it is reversible for either left or right side carry. This does mean that it is going to be ambidextrous friendly, which also is going to make it a little bit safer to use. The clip is not a deep carry, but it should stay pretty securely in your pocket.

The clip is black, allowing this to be an all-black knife. This also means that it is kept in place by three small, black screws, which match the rest of the hardware on the knife. The clip flares out near the top and the butt, with the smallest portion being in the middle. Near the top of the clip, there is the classic Spyderco logo.

The Efficient has been equipped with a liner lock as well as the Spyderco’s Round Hole.

The liner lock is one of the most common mechanism that you are going to find on a folding knife. The mechanism has a side spring bar that lines the inside of the handle. When the knife is closed, the spring bar is held under tension, which makes the bar make contact with the butt of the blade. This keeps it in place and prevents it from closing. Liner locks are nice because you can close the knife with only one hand. That being said, it is not going to be used for as heavy-duty tasks.

Spyderco says, “One of the most common questions we get from people new to Spyderco knives is “Why the Round Hole?” The Round Hole allows the blade of a folding knife to be swiftly and easily opened with only one hand. This revolutionary feature was granted a U.S. utility patent in 1981 and literally helped define the form of the modern folding knife. Unlike thumb studs, disks, and other one-hand-opening attachments, the hole offers a larger surface area for greater reliability and does not interfere with the cutting action of the blade. An iconic symbol of our brand, the Trademark Round Hole™ also serves as a user-friendly alternative to a traditional nail nick in our two-hand-opening folders and a proud expression of our brand identity in our fixed-blade knives.”

When Spyderco is discussing this new knife, they say, “Designed from the ground up to be an affordably priced, user-oriented folding knife, the Efficient has quickly earned a respected place in Spyderco’s line of Value Folders. To make it even betters suited to the needs of tactical end users, we now offer it in all-black configuration featuring a non-reflective black oxide blade coating and matching black liners and handle hardware. Available with a choice of PlainEdge or CombinationEdge blade, it retains all the high-performance features of the original version, including a full-flat ground 8Cr13MoV blade, index-finger choil, sturdy LinerLock mechanism, textured G-10 scales, a lined lanyard hole, and a reversible hourglass clip that can be configured for left or right-side tip-up carry.”