Spyderco was founded in 1976 by Sal and Gail Glesser. Initially, the company focused on selling their first product, the Tri-Angle Sharpmaker, primarily at fairs and trade shows around the country.

In 1981, the Glessers put down roots in Golden, Colorado and introduced the first Spyderco folding knife. That knife pioneered the concept of a round hole in the blade for one-handed opening, a clip on the handle for carry at the top of the pocket, and the option of a serrated edge for aggressive cutting performance. Those features revolutionized the knife industry and literally defend the form of the modern folding knife.

Since then, Spyderco has steadily grown to become one of the leaders in the cutlery industry. In addition to a worldwide distribution network and manufacturing resources in the U.S., Japan, Taiwan, Italy, and China, their innovation has also earned them an impressive portfolio of patents, trademarks, and industry awards. More importantly, it has allowed them to earn the trust and loyalty of countless thousands of dedicated knife users around the world—an audience to whom they are extremely grateful.

Spyderco pioneered many features that are now common in folding knives, including the pocket clip, serrations, and the opening hole. Spyderco has collaborated with 30 custom knife makers, athletes, and self-defense instructors for designs and innovated the usage of 20 different blade materials.

Today we will be talking about the new arrival, the McBee folding knife. This new knife is in stock right now at BladeOps, so you can purchase yours right now!

This knife is a collaboration between Spyderco and Jonathan McNees. He is a custom knifemaker who has been creating knives since 2008. He is a former Marine and describes himself as an “avid outdoorsman.” He has loved knives his entire life and is thrilled that he gets to make them every day. The bulk of his designers are catered toward outdoor or tactical use. His products are also proudly made in the USA and any of his outsourcing is also doing in the USA.

The blade on the McBee is made out of CTS-XHP stainless steel. This steel is a great option when you have a knife that is going to need a high-performance steel. This steel is what is known as an alloy, which is just a metal that has been mixed with other metals. This steel is specifically made up of carbon, silicon, nickel, vanadium, manganese, chromium, molybdenum, and iron. 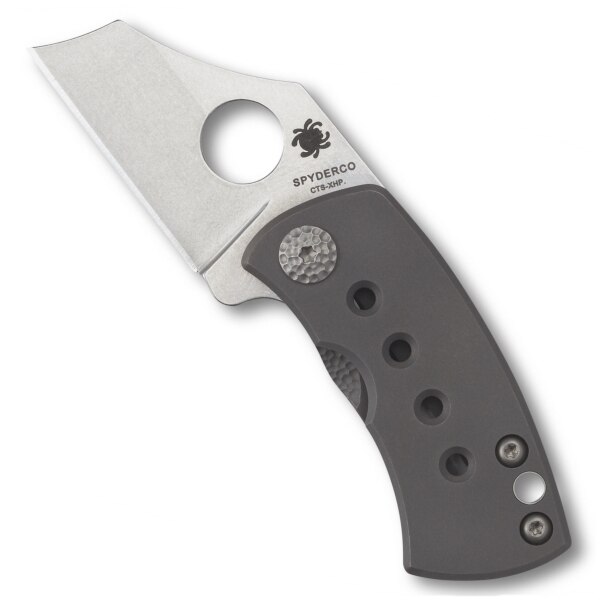 For a stainless steel, it actually has a lot of carbon, which means that it is going to be hard, tough, as well as keep its look for long periods of time. However, the harder the steel gets, the more brittle it is going to be. With this one, we do have a pretty good balance between hardness and toughness, which does allow the blade to take on the toughest of tasks. Just know that the steel might begin to chip in the most extreme of situations.

The blade has been finished with a stonewash finish. This is a popular blade finish on outdoors knives because you don’t have to worry about the image of the knife—the stonewash finish takes care of that by prolonging the original look of the blade overtime.

This finish is created when the manufacturer tumbles the steel around with small pebbles. This creates a rugged, textured, well-worn look. It is commonly found on outdoors knives, because the texture is going to hide scratches and smudges that will accumulate over time. This way, you can use the McBee for as hard of a task as you want and not have to worry about polishing the blade at a later date.

The blade has been carved into a Wharncliffe blade shape. The Wharncliffe blade shape is often confused with the sheepsfoot blade, because they are similar. However, they also have their differences. This type of blade has a completely flat cutting edge, which does mean that it is not going to make an all-purpose blade. The rest of the McBee’s blade shape is incredibly unique. For starters, it is a super wide blade. The spine extends straight off the handle for about halfway up the knife. At this point, it swoops dramatically down to about halfway up the width of the knife. Then, it has a smaller, steeper curve that meets the “point” or the belly edge. This is a tough and durable knife.

The handle on this knife is made out of titanium. Titanium is a very common metal that is often used in knife handles. It is especially used in higher end knives, because it is a little more expensive and durable than the similar aluminum.

Titanium is considered a lightweight metal alloy, although it is going to be heavier than the other lightweight metal alloys. This can be a drawback, because it does meant that there is going to be a little bit more weight to the knife. However, with such a tiny knife like the McBee, excess weight is not only a non-issue, but it can be viewed as an advantage. The extra weight will add increased strength and heft.

One of the other benefits of a titanium handle is that it actually has a warm feel to it. This is a big advantage for an outdoors knife like this one, because you can never be sure of the environment that you are going to be performing in. This way, your knife handle is not going to be freezing in any environment.

One of the drawbacks to a titanium handle is that it is not going to offer the best texture or grip. Spyderco and McNees combat this through the ergonomics of the handle. The spine curves slightly toward the rounded butt There are two shallow and elongated finger grooves on the belly that span the length of the handle. There are four holes that go down the middle of the handle. This will add the needed texture to have a trusty grip on the handle. There is a lanyard hole that will fit almost any lanyard.

The pocket clip on this is statically designed for tip up carry only on the traditional side of the handle. This does mean that it is not going to be completely ambidextrous, which is one of the drawbacks of the McBee.

The pocket clip is satin, which gives the handle a sleek look. It is kept in place by three matte grey screws which do match the rest of the hardware on this knife. The pocket clip also extends to the bulk of the handle, which does mean that it is going to stay extremely secure inside of your pocket. This tiny knife is also going to stay easily concealed inside of your pocket.

This is a folding knife that has been equipped with a signature round hole, a frame lock, which is sometimes known as the Reeve Integral Lock.

Spyderco says that one of the most common questions they get form people that are new to Spyderco knives is “Why the Round Hole?” They say that the Round Hole allows the blade of a folding knife to be swiftly and easily opened with only one hand. This feature is revolutionary for folding knives and was granted a U.S. utility patent in 1981. This feature also helped them define the form of the modern folding knife. They say, “Unlike thumb studs, disks, and other one-hand-opening attachments, the hole offers a larger surface area for greater reliability and does not interfere with the cutting action of the blade. An iconic symbol of our brand, the Trademark Round Hole™ also serves as a user-friendly alternative to a traditional nail nick in our two-hand-opening folders and a proud expression of our brand identity in our fixed-blade knives.” This means that not only does it represent the brand, it is also extremely useful. It does not get in the way like a thumb stud might and it is easier to use than the more common flipper.

Frame locks are specifically known for their strength and thickness, which means that the tiny McBee is going to be able to take on even the toughest of tasks. You will not have to worry about it closing while you are using it.

This is known as the Reeve Integral Lock sometimes, because Chris Reeve is the man who first created this locking mechanism. The first knife that it was used on was the Sebenza folder that was released in 1990. Since then, the frame lock has increased in popularity because people know how reliable and strong it is going to be.

The blade on the McBee measures in at 1.52 inches long with a handle that measures in at 2.33 inches long. This is obviously a miniature knife, with the overall length measuring in at 3.85 inches long. This small knife weighs in at a mere 1.7 ounces. While this seems like it is going to be too small to actually benefit from, don’t be fooled—it really can do anything that the other knives on the market can do. This one is just easier to have with you at all times.

The new McBee folder is a collaboration with both Spyderco and custom knifemaker Jonathan McNees and is based upon the U.S. Marine veterans' "Killer B" custom. Each frame lock design model incorporates the Reeve Integral Lock (R.I.L.) and the matte finish on the handle is highlighted by McNees' signature stippling on the lock recess and pivot pin screw heads. Don't be fooled by its size--this knife is just as capable as anything else on the market. This model features titanium handle scales, a Wharncliffe style blade in a stonewash finish and the pocket clip is statically designed for tip up carry only on the traditional side of the handle.

This knife is in stock right now at BladeOps. Pick yours up right now to get yourself a new favorite knife.