Spyderco was founded in 1976 by Sal and Gail Glesser. Initially, the company focused on selling their first product, the Tri-Angle Sharpmaker, primarily at fairs and trade shows around the country.

In 1981, the Glessers put down roots in Golden, Colorado and introduced the first Spyderco folding knife. That knife pioneered the concept of a round hole in the blade for one-handed opening, a clip on the handle for carry at the top of the pocket, and the option of a serrated edge for aggressive cutting performance. Those features revolutionized the knife industry and literally defend the form of the modern folding knife.

Since then, Spyderco has steadily grown to become one of the leaders in the cutlery industry. In addition to a worldwide distribution network and manufacturing resources in the U.S., Japan, Taiwan, Italy, and China, their innovation has also earned them an impressive portfolio of patents, trademarks, and industry awards. More importantly, it has allowed them to earn the trust and loyalty of countless thousands of dedicated knife users around the world—an audience to whom they are extremely grateful.

Spyderco pioneered many features that are now common in folding knives, including the pocket clip, serrations, and the opening hole. Spyderco has collaborated with 30 custom knife makers, athletes, and self-defense instructors for designs and innovated the usage of 20 different blade materials.

Today we will be discussing the new arrival which is the Spyderco Squeak Slipit folding knife. It is in stock right now at BladeOps, so buys yours today.

The blade is made out of N690 Cobalt stainless steel. This steel is made in Austria that is known for making steels perfect for razor-sharp knives. The steel is often compared to 440C, because they do have similar qualities. It has 1.07% carbon. It is also often compared to VG10, except that it holds an edge better. When the company is describing this steel they say, “N690 is a stainless steel knife steel with excellent edge holding properties making it suitable for applications as knife making.” This is really what the steel is known for: how well it can hold an edge. With this knife, you will never have to worry about sharpening, because it won’t get dull for so long. One of the other benefits is that it has a fine grain, so it can be sharpened to a very fine edge. The steel is also highly corrosion resistant, even in some of the more extreme environments.

The blade has been finished satin, which is the most common blade finish that you are going to find in the market. The finish is created when the manufacturer repeatedly sands the blade in one direction with an increasing level of a fine abrasive material, such as sandpaper. This finish shows off the bevels of the blade and the fine lines of the steel. 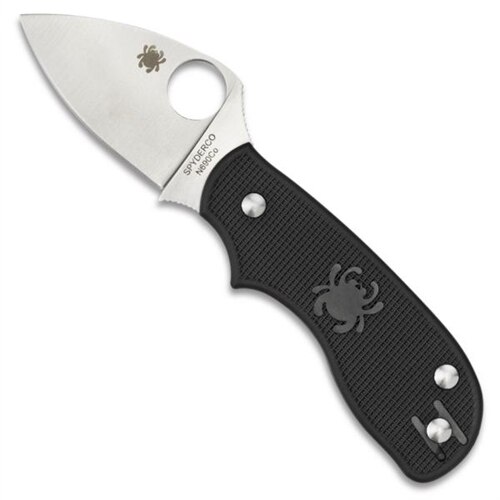 The blade on the Spyderco Squeak has been cut into a dramatic shape. The spine of the blade curves harshly from the handle to the point of the blade. This does create a lowered point, which is going to give you more control than you would find on other blade shapes. Plus, the point is pretty broad, which does mean that it is going to have some pretty significant strength behind it.

The belly of the blade is also incredibly large, which will allow this knife to be great for slicing. As a reference, the bigger the belly, the easier it is to slice something. Even though this blade is rather small, with a belly as large as the one it has, you won’t have to worry about what it can do for you.

The handle is made out of Fiberglass Reinforced Nylon, or FRN. This is a thermoplastic material that is very strong, resistant to bending and abrasion, and is almost indestructible. What sets it apart the most from other fiberglass materials is that the nylon fibers are arranged haphazardly throughout the material. This means that it is going to be strong in every single direction instead of just the direction that the fibers are arranged. This takes away the brittle feeling. However, the feeling of FRN does have a somewhat plastic-y feel, which was thought of as cheap. It is also going to offer less grip than G-10 could.

The benefits to a handle made out of FRN is that it is going to be strong and tough. It is not brittle, it is not going to break apart. The material is inexpensive because it can be injection molded, with the texture added in the production process. Lastly, because of all of these qualities, the material is going to require almost zero maintenance.

The handle does have one finger guard that is slightly below where the handle starts. This is there for protect. The handle is going to give you a solid grip on it, because of the extreme texture that covers the entire face of the handle. There is one slight finger groove that is going to add comfort and grip. There is not a lanyard hole on this knife, which is a drawback.

The pocket clip is a reversible tip-up deep pocket wire clip. This means that it will be ambidextrous friendly because it can be attached for either left or right handed carry. That being said, it is not reversible for which way you carry the tip. It can only be attached for tip-up carry, which is the more dangerous way to carry the knife. This is because if it happens to come unfolded in your pocket, when you reach in, the blade will be open near your hand. This can lead to accidental piercings or cuts.

The clip is a wire clip, which will significantly cut down on weight. It is silver and is kept in place by one silver screw, which does match the rest of the hardware on this knife.

This is a folding knife that has been equipped with Spyderco’s round hole for assistance when you open it.

This is a manual folding knife that has a couple of advantages. The first is that this is going to be legal in more areas of the US than an automatic or an assisted opening blade. Of course, you should always know your local knife laws just to be sure that it is legal for you to have. The second advantage is that it is going to be easier to maintain. While it does have the innards that you have to watch out for, there is no screw that could potentially rust or break, yielding the knife inoperable.

On the flip side, there are a couple of disadvantages. The first is that it is going to be harder to bring into play. It is not going to open automatically, which means there may be some fumbling around while trying to get it open. The next is that you cannot open it with only one hand.

Spyderco says, “One of the most common questions we get from people new to Spyderco knives is “Why the Round Hole?” The Round Hole allows the blade of a folding knife to be swiftly and easily opened with only one hand. This revolutionary feature was granted a U.S. utility patent in 1981 and literally helped define the form of the modern folding knife. Unlike thumb studs, disks, and other one-hand-opening attachments, the hole offers a larger surface area for greater reliability and does not interfere with the cutting action of the blade. An iconic symbol of our brand, the Trademark Round Hole™ also serves as a user-friendly alternative to a traditional nail nick in our two-hand-opening folders and a proud expression of our brand identity in our fixed-blade knives.”

This hole is easy to use because it can be accessed from either side, which does mean that it is completely ambidextrous. It is also easy to get the hang of, like a thumb stud. But, like a flipper, it doesn’t get in the way when the knife is opened. Plus, it does have a certain aesthetic advantage over the other opening mechanism.

The Spyderco Squeak is a SLIPIT non-locking, one hand opening clip carry folder. Designed for legally restricted carry where locking folders are prohibited, the Squeak features a full flat ground blade made from Austrian Bohler-Uddeholm N690C0 steel. This high carbon steel with added cobalt gives enhanced edge retention and is easier to sharpen. Built with textured jimping on the spine of the blade and the choil, the Squeak stays put in your hand. The blade is held open with a notched joint in the knife's pivot--when closing, the slip joint creates resistance similar to a traditional slip joint penknife. With a deep finger choil, the Squeak is amazingly comfortable in the hand and allows you to choke up close to the cutting edge for better, more accurate cuts. The handle is FRN (fiberglass reinforced nylon) and engineered for user comfort whether in the hand, with ergonomic handle texturing, or in the pocket with a reversible tip-up deep pocket wire clip.

This is in stock at BladeOps right now, so hurry on over and buy yours today.